Yields on the 10 yr going bonkers, causing turmoil in financial markets, but it's probably good news in the medium term...

The yields on the 10 yr Treasury spiked to highest levels in a year, sending shock-waves through financial markets

For those not believing in the re-opening trade, look no further than the 10 year Treasury yields.

They've been climbing for months, and are now really accelerating.

Hitting levels currently not seen in more than a year: 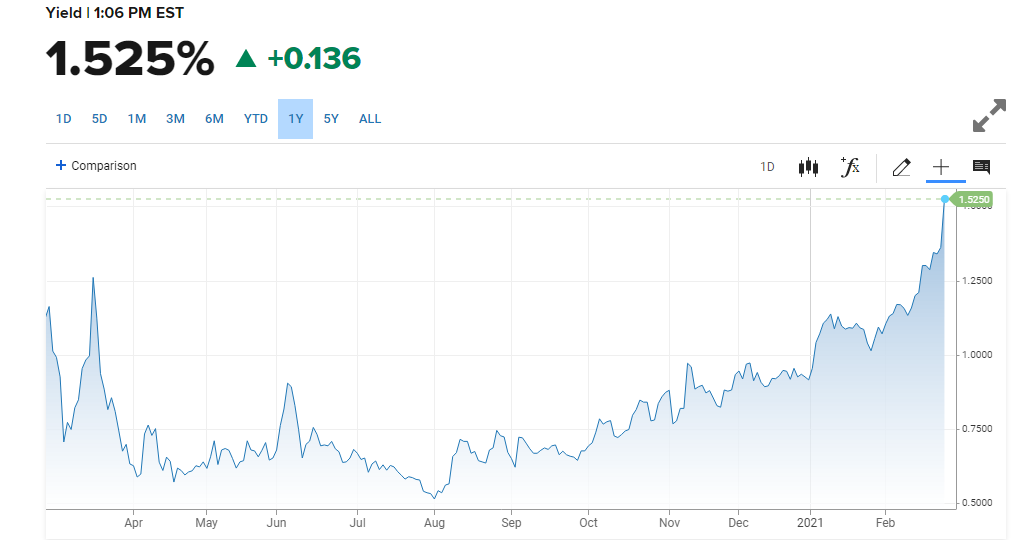 The current yield over 1.5% marks almost a 3x increase from lows seen in August of last year.

Why is this happening?

So, what is this telling us?

With the vaccine roll-out well underway and pockets of the economy starting to open back up, it means that investors are positioning for a significantly improving economy in the not too distant future.

As a result yields are rising on the 10 year and stocks are falling as investors are repositioning for the expectation of a stronger economy in the coming months.

As a result stock markets are getting crushed, with the Dow down roughly 500 points and the Nasdaq being hit even harder.

What does this mean for bitcoin?

It could mean a lot for bitcoin, or nothing at all.

With bitcoin being more institutionalized than ever before, it also has some drawbacks...

With a lot of the largest tech investors also holding bitcoin, if they are forced to start selling tech stocks they may also be forced to sell bitcoin as well.

Tech stocks traditionally are the most impacted by rising yields as it costs more money to service debt.

However, something else to consider are the implications of a rising 10 year T-bill...

Not only does it often signal an improving economy, it's also traditionally a barometer of expected inflation.

IE, when yields rise it also means there is an expectation of impending inflation, while inflation may be seen as bad by most people, bitcoin investors have long opinioned that's exactly the thing bitcoin was created for.

So, there is the chance that if we are entering a period of higher inflation, it might actually be good for bitcoin, though that is up for debate.

Either way, the FED is still buying $120 billion worth of Treasuries and Mortgage Backed Securities every month, and that won't be stopping any time soon and we are on the cusp of another massive stimulus bill.

Things are still in place for a great year for bitcoin and probably stocks as well, there might just be some turbulence in the very near term as the yields catch up to what the stock market had already been signalling, an improving economy.