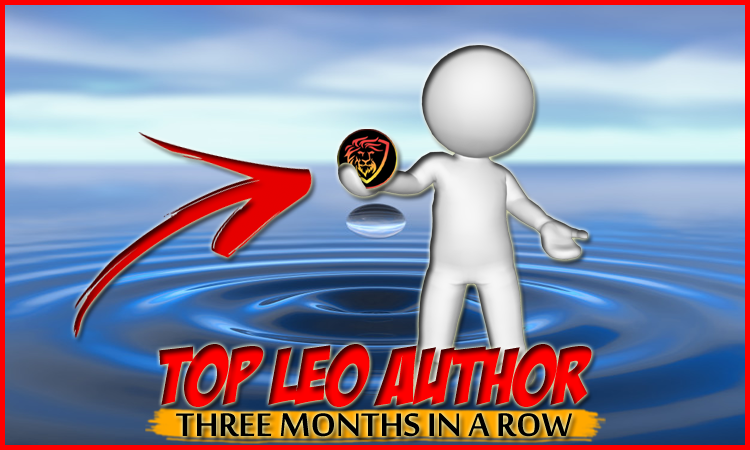 The ripple effect is often used to describe a multiplier in macroeconomics. That one thing leads to another, and that many more things occurs due to that first stone you throw into the water, and that is exactly what these amazing achievements means to me. To be one of the most rewarded users, just by doing the things I have done for 4+ years already is incredible, and that would never have been possible without LeoFinance and its amazing leadership, community and innovative features and changes.

I am truly grateful for that opportunity, but to tell you the truth, I am honestly more happy over the fact that my contributions and the time I put in has been brought into the light rather than to stay in the shadows, and I can't thank you enough for that amazing chance and the overwhelming support.

Due to my contributions and the outstanding support on LeoFinance, I became the top 20 author on LeoFinance during my first month, in October. My second month was even more incredible and I was able to climb the leaderboards during that month. I was the 9th most rewarded LEO Author in November and during December, despite me having far less time and even though I haven't been half as active as previously, I still became the 16th most rewarded LEO Author for that month.

While LeoFinance has given me both motivation and encouragement that I was missing for a long period of time, it has also showed me that things I believed in was true and that I was never at fault when I thought that engagement was vital for growth and success. It also proved that 'lesser' accounts are important for a healthy community so I have started to feel that my endeavours in the past was somewhat misplaced and that LeoFinance finally gives them the perfect place, and a solid foundation to build upon.

This is why I decided to bring back the Minnow-ASAP initiative, where I look for people close to 500 Hive Power and/or 100 Leo Power. People who contributes and have not yet been able to establish any significant support on a daily basis. In other words, people who are not heavily rewarded for their contributions. I am mainly looking for people who are overlooked despite their efforts of sharing quality content. I look for five people in total, initially, and my goal is to add more users with time.

If you are, or know someone who meets the requirements. Feel free to read the official Minnow-ASAP post and send me a DM on Discord [EviLDoLLTV#9035] or make a comment in any of my articles.

The Minnow-ASAP initiative is only one of the things I strive to implement and run, but I think it's a good starting point and I think it's logical to take advantage of the massive hype around LeoFinance to have a greater chance of a successful launch.

These things aren't much of a 'change' though, as I have always been eager to strengthen the community in various ways, but I have to adapt and change things if I want to be active and contribute to Hive and LeoFinance. One of my biggest problems throughout this time has been the lack of time.

Most of that is the result of my job and Covid-19. I have a hectic work schedule and this limits me. It's a huge obstacle that I cannot overcome, but there are things I can do to make things a bit easier..

One of those things are to schedule my posts, something I haven't really done previously, but something I will try to use in the near future. This should, theoretically, help me to produce content easier.

Something else I need to focus on is my personal brand building. I think one of the biggest reasons for my success on LeoFinance was due to me being unique and original. I spent a lot of time on my articles, creating covers and making necessary edits, but I did that on Hive as well..

I shared ideas, tips and knowledge around SEO (search engine optimization) and I talked a lot about marketing and how important hype is for success, and those things, despite LeoFinance being about finance & crypto, I think they hit home so to speak.

One could simply say that LeoFinance was the perfect place for me to do those things, even though it was not in the same niche, and I think that was the exact thing that was needed.

Not only that though, I also think that me being 'all over the place' making comments was one of the most important factors for my success, so I need to up my game.

I haven't been able to engage much lately due to my hectic work schedule and I was in the leaderboards of engagement during my first weeks on LeoFinance. I miss those days and I will strive to come up with a decent "schedule" for LeoFinance as well in the coming days, so I can create both articles for you to consume and engage on the platform as much as possible.