A couple of months ago, my mind was blown. I learned about Liquidity Pools and have since been intimately involved learning as much as I could. If you don't know what they are or understand them, it's time you get a lesson from me.

The first thing you must understand is that the market for a stock, coin, token, etc. needs fluidity. It needs a stack of buyers and a stack of sellers. When you have a lack of one or the other, there is no stability. For instance, the I Am Alive Miner has no movement. It has no liquidity:

Unfortunately, when there aren't a lot of buyers/sellers, you will have the greater likelihood for things like this to happen:

This sucks! One moment, you are very happy to buy something on the Hive Engine and you buy without looking at the sell price or the buy price, because you're just excited to buy it! Well...sometime later, when you see another project that you're more interested in is available and you need those funds, you think, "I know! I bought those 2 ACITVEM tokens for 5 Hive each. I'll just sell one!" Without looking at the price, you just happily click the sell button at the highest buy price to find that the buy price is 0.5, not the 5 Hive you spent in the first place. You just got hosed on your "investment."

You probably want to yell: All is not lost. This can be avoided...to some degree...with Liquidity Pools.

Liquidity means something is being traded often. Imagine water moving freely. You dump a pitcher of water into a baking pan on one side and on the other side, there's a towel that is super dry...The rush of water is absorbed quickly. The water level rises, sure, but the pan can take it without too much disruption.

If you have a commodity (think a token, coin, cryptocurrency, etc.) that is traded often, the buy/sell spread is usually pretty tight. Here's an example:

Notice how the Ask and the Bid prices (sell vs buy price) are within 0.0000224 of each other? That's pretty tight! Also notice that there is $46K in transactions that have taken place in just the last 24 hours...So if I drop $1K into the market, I may see some disruption, but it should be able to absorb it pretty handily, both on the buy and on the sell side. Spend $1K on ALIVEM and you'll skyrocket the price.

There was a disruption in the LVL market recently. On February 15, a "whale" accidentally sold over 1.25M LVL tokens. The market could support it, but only because some ruthless bargain campers left buy orders in under 0.00001 Hive/LVL. I believe the camper made off with 1M LVL for a total of 0.29 Hive. Today, that 0.29 Hive camper has about $4K Hive's worth of LVL. There were a couple of problems:

When the "Swap" button was pushed (as they were trying to swap LVL for Hive), the transaction went through just as fast as all the other transactions on Hive and the whale sat in depression.

The idea of creating a Liquidity Pool is a very interesting one. This is the idea...if I can put up enough of a pair of tokens that people are very interested in trading, it will act as both a SELL wall and a BUY wall. Let's get into an example:

In order to make trades easier for LVL:Swap.Hive, we want to put in equal amounts, in value to each other, of LVL and Swap.Hive. Right now this is the equaling of the pair:

Now, when someone wants to buy or sell a large amount of LVL, they can do so through the Liquidity Pool without upsetting the price of LVL as dramatically. There are a lot of people who have put LVL and Swap.Hive into the Liquidity Pool:

See how it says there is $26,623 worth of both in the pool? This will act as a "Shock Absorber" to the market when a large order is placed through the Liquidity Pool. Now, if you were to still buy or sell LVL, outside of the LP, you would buy/sell for these prices: 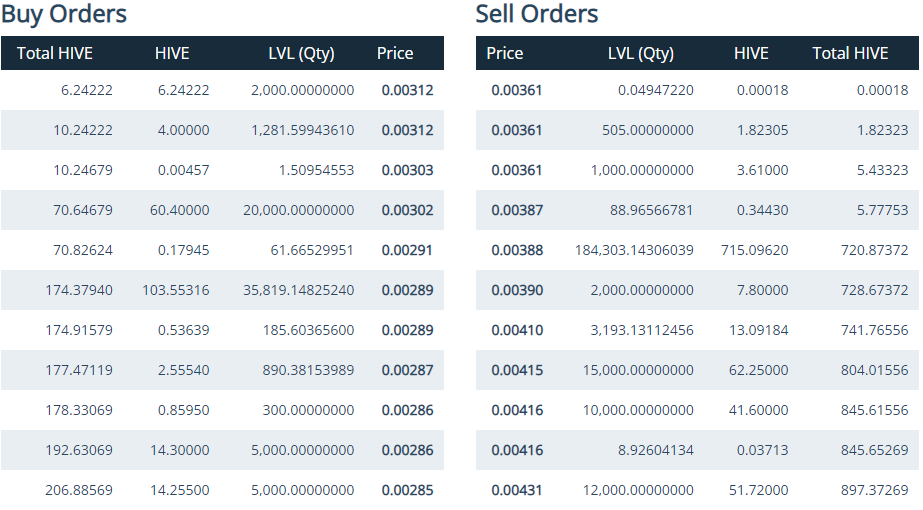 Ok, Ok, I see how Liquidity Pools Work, but what's the incentive to provide Liquidity?? This may be the best part. For some, the incentive is simple: provide an easy way in and out of a commodity, token, coin, etc. When this is the case, the liquidity is usually provided by the owner of the centralized commodity. You may notice something very interesting in that picture... Let me highlight it:

Do you see the APR?

So are there incentives?

Yes. As long as you like the rewards, there are incentives to put liquidity into the pool.

Are there any risks?

There is something called impermanent loss. This is how it works:

Let's say I bought 50,000 THGaming and I wanted to put it into their liquidity pool...which I did do by the way...it's not just a supposition in this case...you get to learn from me. When I first put in 50K THgaming into the Pool, I only needed .0005 Hive for every 1 THGaming, or 25 Swap.Hive because that's what the price was: It has now been a few weeks. This is what my portion of the Liquidity Pool looks like now:

I want you to notice 2 things.

How can this be?!

As the price of THGaming shot up, more people purchased THGaming from the pool. This caused the price to go up as well as there being more Swap.Hive in the LP. Therefore, I "lost" 14K THGaming. It isn't permanent, per se. If a lot of people sell THGaming in the pool and the price goes down, the number of Swap.Hive will decrease and the number of THGaming will increase. Their combined value will also decrease. Impermanent loss is essentially what they call on Wall Street, a "paper loss"...not in overall value, per se, but in the amount desired tokens I was holding. For instance, had I not put THGaming into the LP, I would have had 25 Swap.Hive's worth of THGaming turn into 67.5 Swap.Hive's worth (0.00135 * 50,000). To incentivize me to add liquidity, I got rewards paid out daily, but until I remove my liquidity, on paper, I will show a loss of THGaming and a gain in Swap.Hive...that's Impermanent Loss. It becomes Permanent loss when I remove liquidity...because if the price goes down, I'll gain more THGaming. Who gets those fees?

The people who contribute to the Liquidity Pool get the fees spread out equally. So if I sell LVL, I pay a 0.25% fee and that 0.125% of LVL and 0.125% of Swap.Hive is spread to the pool in proportion to how much of the pool the contributor puts in. So if I contributed 5% of the pool, I'll get the rewards (if there are any) and 5% of the 0.25% fee per transaction. Some liquidity pools are used so often, you don't need a "reward" as the fee is the reward:

This is all research that I have done in the last 3 months. I could be wrong in some of my data, but I have tried to give you the best information I could. If I learn that any of this is incorrect, I will attempt to edit it for accuracy. I am not a financial advisor and am not giving you financial advice to invest or keep from investing in Liquidity Pools. I hope this helps you in doing your own research. If you want financial advice, seek out a competent professional who will act as your fiduciary. That's not me.

I do accept massive upvotes and Call-outs like alive, luv, pizza, pgm, wine, lolz, beer, etc. I Luv them all!

These are the coins discussed...Enjoy:

If you found something in this post that is NOT CORRECT please let me know. I want to fix anything that is wrong so this can be a huge help to people learning about LP's. I hope this post helps everyone, because more liquidity in the markets DOES help everyone!