How This Trading Stuff Works

We will be talking about Bitcoin and Monero in the following examples. I will hoist my thought process upon this one crypto pair so that you understand more about trading.

First of all, I know you are all focusing on the dollar value of the entire crypto market and it looks like a crisis. It is not. It is a reaction to another false narrative by the media. The tweet was the lead, then the spun it, then a study shows what fools they are. The banking system uses more energy that Bitcoin.

Crypto is still doing its job, still transfers fine, and it is still the most secure way of transferring money long and short distances. This is is what death throws look like as the banking system enters the consequences stage of this printing game. They must beat down all competition so that people continue to use their insecure, flawed, paper system.

If I go back to mid-April and buy one BTC worth of Monero, I would get 136 XMR.

I am better off trading during this massive drop than in the stability of the peak. 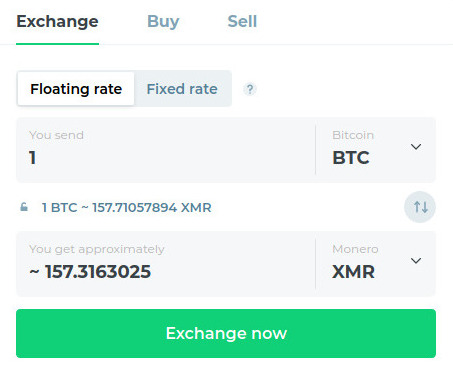 Moving on to how this all works.

Speaking of reactions, that is what all of this is about. In order to trade well, we need to know how coins react to fluctuations in the bitcoin price. Our target coin is Monero, the one that I plan to accumulate, and occasionally sell when overvalued.

Below I have two charts.

Blue marks where bitcoin peaked recently at around $64,000.
Red marks where the target finished reacting the the bitcoin spike.
Green marks where we are today.

Bitcoin has lost utility as a means of transfer, therefore has lost some of its real world value. Western Union is cheaper and in some cases, faster. For that reason, I would like to obtain more coins with utility. Monero (XMR) is one of them. 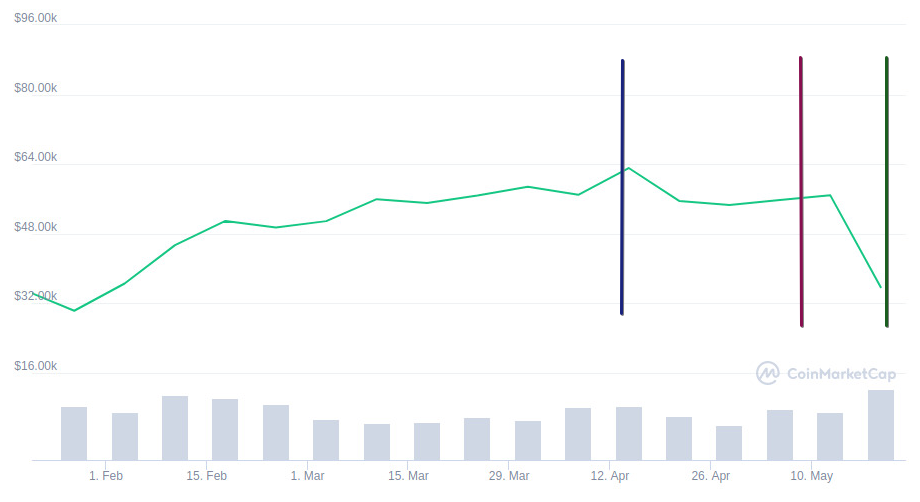 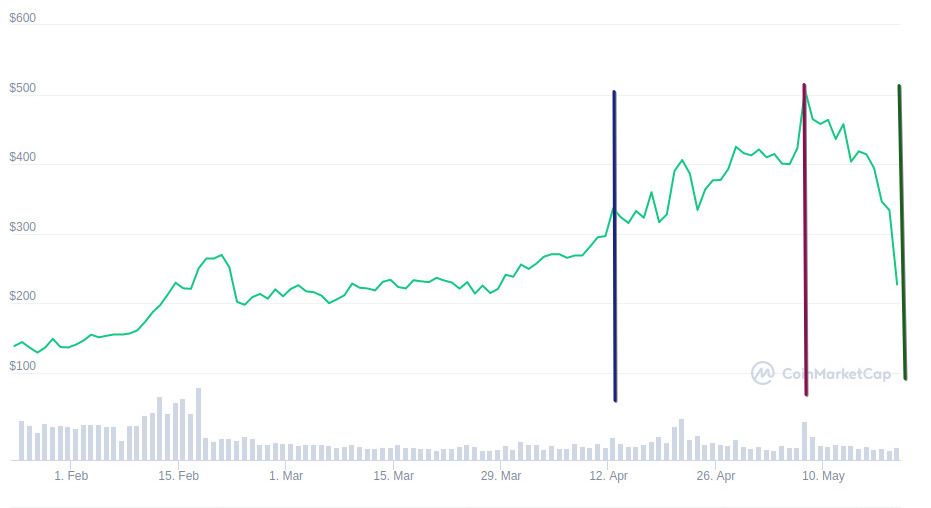 The following pattern developed in 2017. When bitcoin rises rapidly and levels off at a new level, it is usually time to buy your target coin. Ideally, you should be accumulating them at the start of a steady rise (left of the blue line). Alternative coins react more slowly to a steep rise which makes them a buy candidate at that point. They rise while bitcion stabilizes in a new trading range, then equalize to their new trading range, sometimes over a period of weeks or months (between blue and red on the Monero chart). It happens after the people's focus on bitcoin fades a bit and attitudes normalize.

Think of it as a delayed reaction to the rise in bitcoin.

As long as bitcoin stays in a new price range, your target should move up for a period of time until it equalizes. I sold a bunch of Monero where the red line appears. Monero was also my trade-out-to-cash while bitcoin was at or above $60,000. See yesterday's post.

So during a rise, use the "more valuable" bitcoins you have to buy the target coin that you already love before it reacts.

As I write this, the opposite kind of slow reaction is happening. Bitcoin just dipped to around $32,000 and Monero continued to fall to around $230.

But, I did not use $32,000 dollar bitcoin to buy $230 dollar Monero. I was watching both and saw that bitcoin rose to $37,000 while Monero continued to fall. I bought $230 dollar Monero with the higher priced bitcoin, thus catching the Monero dip before it reacted to the bounce. This is common!

You should be lining up your next move while you watch bitcoin mooning or tanking. I always wanted more Monero, but did not want to pay $420.00 for it. I nearly got it at half price just moments ago.

Next time, watch the crash, but line up the coin you want. It beats wringing your hands, right?

Yes I spent Bitcoin during a heavy crash

Right after the bounce, actually. The end result was a huge discount on the Monero that I bought. 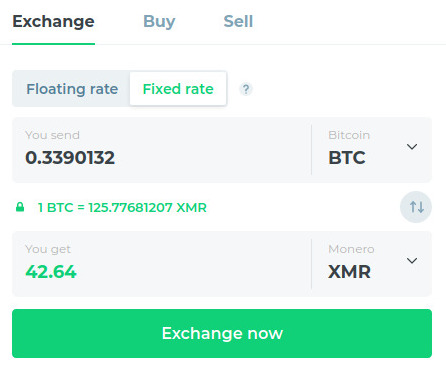 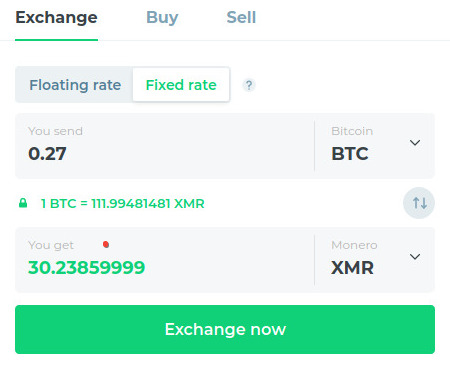 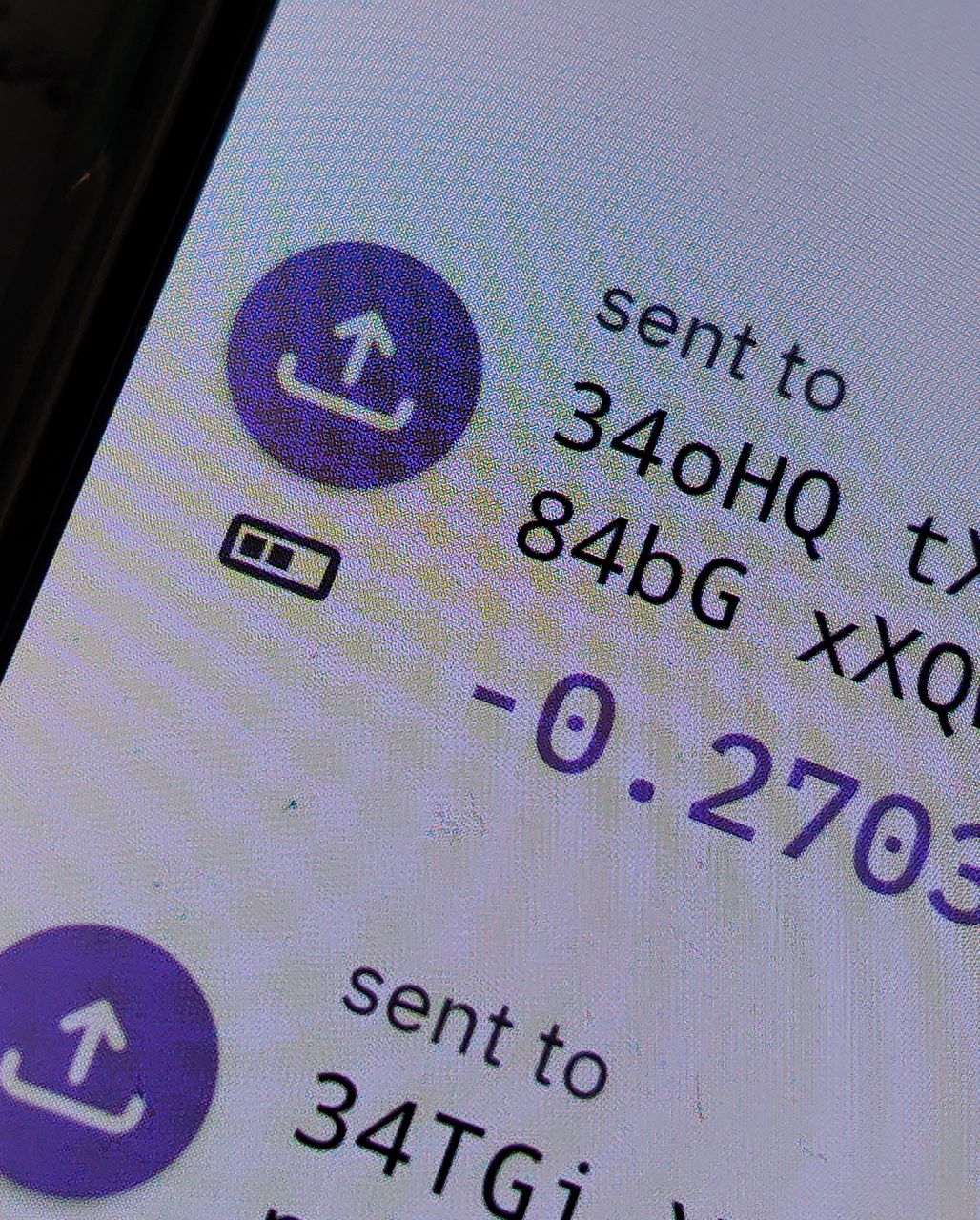 As I get ready to publish this, the bitcoin transaction has not even received 6 confirmations, but the timing of my decision has locked the trade in place an the above profits have already been realized.

I do not use traditional exchanges especially for bitcoin transactions. The fees for moving bitcoin are too expensive. Why would I make more than one transaction? Instant exchanges, without any kind of registration, are better in the long and short run.

I paid $12 dollars for the bitcoin transfer, but in the end, the money made was worth it. It is really nice that this bounce took place live while I was writing. I am not writing about my trades or holdings in order to get congratulations in the comments. I do it so that you can see the thought process and logic that I use. I am sharing the patterns that I have studied over the years. I open my trades up to you all so that you can apply the examples and get the coins that you like and get the timing right when you do.

I pulle dup the green "Exchange Now" images as I wrote this post. They were for reference purposes. That is where I go to see what price I would get before trading. I did not know I would be buying XMR when I started writing this post. The bottom two images are from my Coinomi wallet for sending bitcoin and ChangeNow.io who made the trade and sent me Monero

Numbers are all fluid - all images captured as they happened.

Thanks for taking a walk in my head for a bit. You can do this too!