Map of the main dripping/dividends tokens

Oh nice, look at that juicy 0.003 DEC I just got!
One of my guilty pleasure is refreshing my wallet to see if some tokens dripped in it... Not that it makes a big difference in value, obviously, but I don't know. Maybe just for the sake of numbers. Increasing numbers are good, right?

So I had a bit of fun mapping these flows. Most of you are probably already aware of the synergies, but anyway it's a nice graphical representation and it may gives you some ideas, so I wanted to share, without any pretension.

ARCHON and DHEDGE are two dripping tokens which drips one another, and themselves! ARCHON will drip DHEDGE and more ARCHON, while DHEDGE will drip ARCHON and more DHEDGE. And there's more! These two tokens will provide you with other dripping tokens: BRO, UTOPIS and HUSTLER. In turn, UTOPIS will drip, among others, more ARCHON... Now heads are swinging! Hence the interest to map all this! Definitely one of my favorite, check UTOPIS and chronocrypto if you don't own any.
What is also of interest in this loop is that you get a share of HIVE and SWAP.HIVE.

Probably my favorite! Not sure if it's true, but I read BRO is largest fund on Hive. His founder raymondspeaks (yes, I don't dare to mention him, I'm not worthy) is busy and involved in many (if not most) projects on Hive. Plus the guy is really interesting, I would say, even fascinating. Just read him and see what he's done (but come on, everyone here knows him).
Anyway, in consequence, you can expect a lot of different tokens: APE, SIM, WEED... It's a must-have if you want Splinterlands tokens, or even if you don't want. It's a must-have, period.
On a side note, apart for supporting a nice community and being one of the best tipping token, stacking ALIVE also drips BRO daily. So you may want to own some if you don't already.

If you want to focus on HIVE dividends, then SPI and EDS are for you!
EDS is very effective, paying weekly around a 20% annual rate.
SPI, I really like the project, it is very solid. But I'm a bit disappointed with the frequency at which the list of holders is updated. I only received my first dividend 2 weeks ago, I thought I was in the book, but nope: last weekend I again wasn't in it. But it doesn't matter, as they say: the value is not in the dividend, but in the token.
SPI also has a branch paying in LEO, LBI. I don't own any yet, but it seems to be giving good results.

I started mapping INDEX, linking all its dividends tokens, and I gave up: it was too much, too messy. So instead I started highlighting the dividends tokens, and well, I almost gave up: it's a Christmas tree, almost everything is highlighted!
For the sake of clarity, I just kept the tokens that were already mapped. Just know that you also get many others, like VIBE, BEE, POB...
With such a broad range, obviously the individual dividends won't be high, but it's fun to watch.

Enough talk, here is the result.

The INDEX drips are shown with a bold blue border. 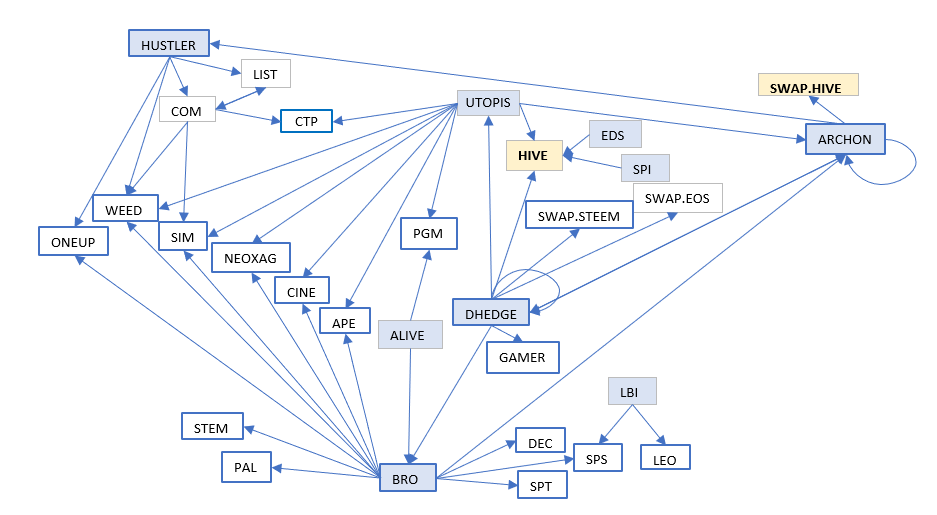 I'm quite happy that I found the good arrangement to have only 2 lines crossing each other (I assure you it took trials and errors). I mainly made it for myself, but I hope it is clear and useful to some of you.

Again, I don't pretend it to be an exhaustive map. Please feel free to correct me if needed, or to add to my knowledge, if I could watch more drips coming my way!