Aeroplanes or BTC: All the Same - a Series of Decisions leading to Unwanted Situations

A very recent event led me to make a chain of stupid not well thought through actions resulting in an unwanted outcome. It is interesting how our brains are wired. While we know better, in the spur of the moment we may find ourselves making decisions that go against what we should be doing when following our analyses and believes. At normal circumstances we may act 'wisely', but when something unexpected happens, we may react in a way that will be counterproductive. 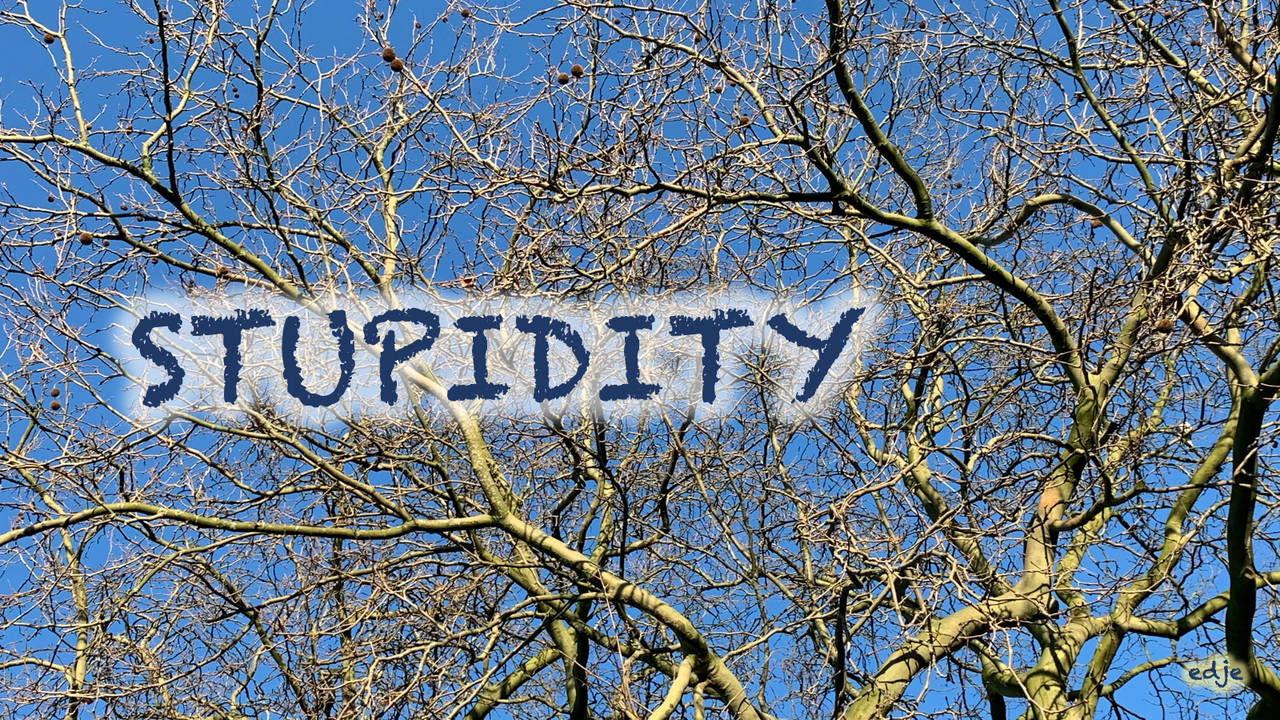 photo and creation by edje

Accidents with commercial aeroplanes give us a lot of insights regarding humans reactions when something out of the norm happens. Since decades, commercial aeroplanes are highly automated. Aeroplanes can fly itself without human intervention. Many can land itself completely automated as well. Though aeroplanes are self-driven (so to speak), for good reasons we still have pilots in the cockpit; Humans that can analyse the systems and intervene when necessary. However, we learned from most of the aeroplane accidents: While the systems are trying to prevent the accident from happening, a series of wrong decisions made by humans (air traffic control and pilots) usually results in the accident actually happening.

As you may know, I'm bearish for Bitcoin. It hasn't been longer than a day or so ago, I wrote a whole post about this here named it "Hopes & Dreams versus Logic". This was after the pump allegedly triggered by mister Tesla Musk. Soon after I discovered the pump, I decided to sell the little BTC I had for a stable coin. A single pump should not change my outlook for BTC, and my actions should follow the conclusions of my analyses. Especially when the signals don't change the fundamentals in the analyses that led to the conclusion. As I've pointed out in references post, the pump didn't change the bear-ish developments of BTC at all (see also chart below). Time to monetise a little.

As it turned out yesterday afternoon, I seemed I made a 'wise' decision. Having sold at the 37k$ mark, around a 10% loss was prevented when BTC came all the way down to the 33.5k$ mark. 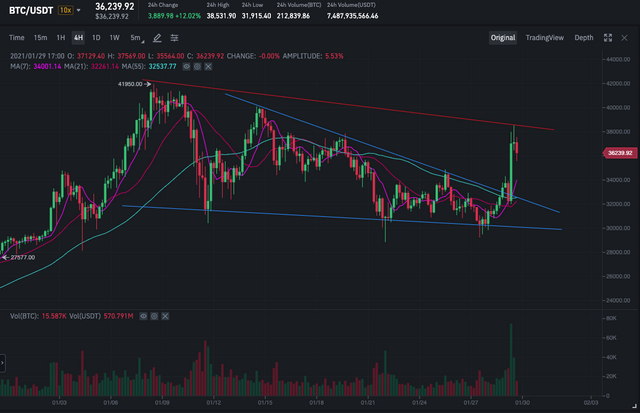 BTC/USDT pair at Bittrex with some TA: up to 30hrs ago

Yesterday evening I was following BTC for hours and hours while watching a few movies. Smartphone at hand, BTC charts opened and self-updating every single second, barely remember anymore what the movies are about. Guess I was too focussed on what BTC will be doing. For the short term it gave many signs it'll break the 34.5k$ mark. Super low volume though. I thought: "With such low volume, nothing will go." Usually, it'll try a few times and then it'll drop to whatever resistant level down below which is likely around the 33.5k$ mark.

Not being a trader at all (I'm more an investor type, longer-term instead of shorter-term focussed), for some reason I didn't want to miss out when BTC would indeed break 34.5k$ level.

The first action was to set a conditional buy order for a level little higher than it's resistant level it needed to break: 34.8k$ I decided for. When setting the order, I was very surprised the order got filled immediately. Fortunately, it was half of my previous BTC funds I bought. While I strongly believed I wasn't making an error, I tried again to set a conditional order for the other half of my original BTC stack. But also that one got filled immediately. I was dumbstruck! "WTF?", was screaming between my ears. So loud, I didn't hear anything else anymore: Not the TV, not my laptop fans, not anything!

Sometime after my mind settled down a little, I discovered I was making a huge error! I didn't use the conditional crypto purchase feature, but the spot purchase feature of the exchange. How a fool I am!

The logical reaction to my errors should've been: Sell my BTC, take the commission losses I incurred (can't be more than 0,2% or something) and set a proper conditional purchase order. But I decided not to do so. BTC was growing and growing towards 34.5k$, almost glued to that level. And then, it broke! For a split second it touched the 34.8k$, the level I would've set my conditional purchase order. This led me to the thought: "Even if I wouldn't have made errors in setting the conditional buy order, I would've owned BTC by know anyway. Let's keep them and see what happens." Shortly after that, I fell asleep on my couch, lights and TV still on.

This morning, a little shock. "What happened yesterday?", I thought. Knowing I made stupid mistakes on BTC yesterday, still thinking bear-ish, I was not at all pleased I just passed out on my couch before my next step for my BTC holdings. Quickly I checked BTC levels and got confirmation of what I was 'fearing': Overnight I lost around 3% in $ value and at the time of staring to write this post, BTC dropped a little more. 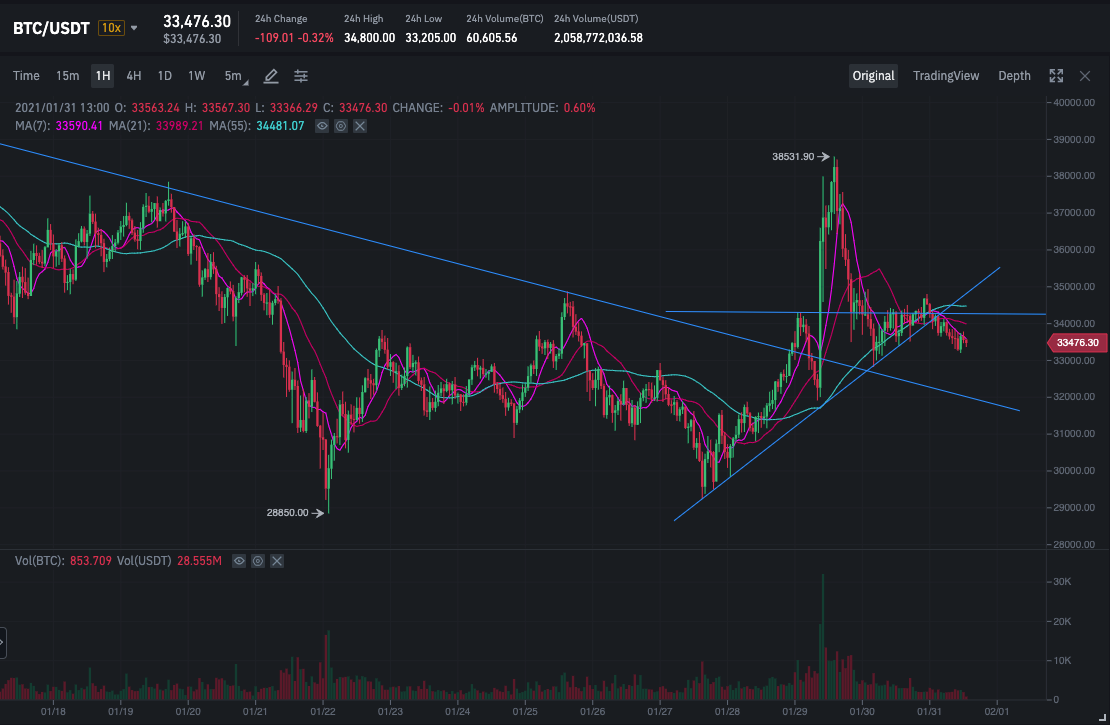 BTC/USDT pair at Bittrex with some TA: up to a few hours ago

Currently still holding on to my BTC, hoping for BTC to find its way up so I can minimise my losses before selling and put these funds in a coin that has more upside potential. Like Ether. Though this coin shows not to be able to break all-time-high, still this one is more bullish than BTC is.

And then, just before finishing this post, I noticed an instant breakout of BTC almost back to levels I purchased at, yesterday. With a little more volume, but still, the volume is not great. I suppose I'll be selling very soon 🙃 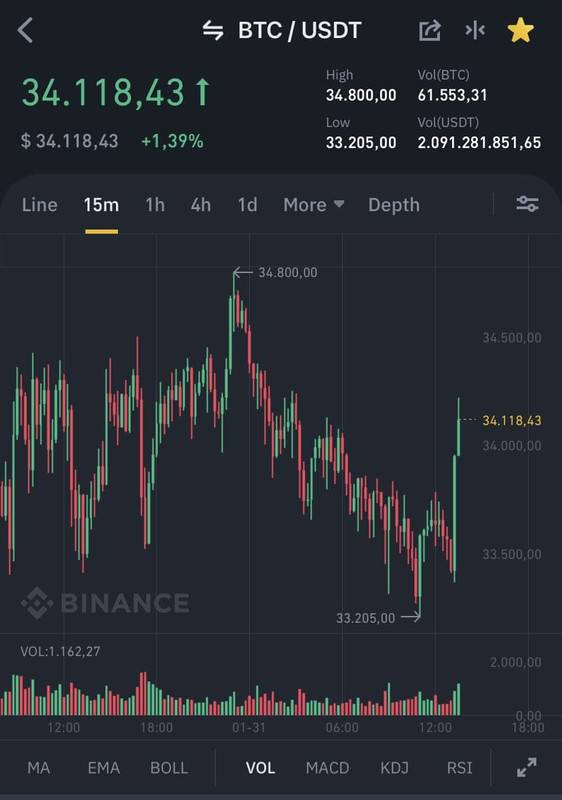 BTC/USDT pair at Binance: up to a few minutes ago