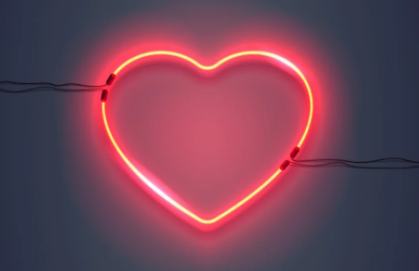 Centralized exchanges are a double-edged sword; complete wildcards. They both hurt and help the cryptosphere in a variety of ways. 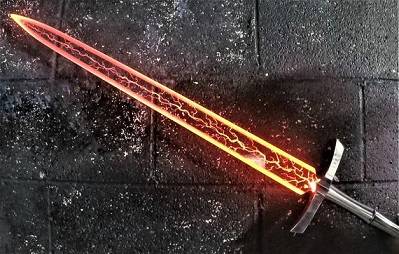 On one hand, centralized exchanges solve all issues regarding the scaling debacle. Because they are centralized and all trades happen on private servers inside a walled garden, scaling can approach infinity without having to invent genius solutions to very tough problems.

On the other hand, centralized exchanges are the choke point of the industry. Just like governments impose many of their restrictive and unfair regulations through the banks, so too are centralized exchanges the banks of crypto. It is this gateway that allows our enemies to control and otherwise manipulate the systems we are trying to build. Quite counterproductive indeed... but also productive at the same time. The dichotomy is real. 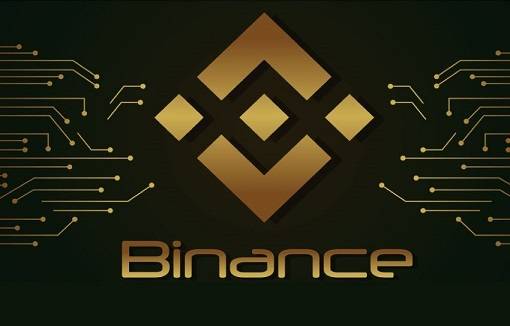 When looking at Binance specifically, there are so many mixed feelings. In relation to the Hive community, Binance has already fucked us over two times. The first time with the #steemhostiletakeover and the second time with the wLEO hack.

After blatantly attacking our network, Binance made the claim several times that they have a policy of non-interference. In reality, they simply didn't want to turn on their buddy Justin Sun, who they pretend they are not buddies with. Nice try Binance Mafia.

As far as the wLEO hack goes, the funds were laundered through a Binance account. Seriously, who does that? The account in question has been involved in tons of known illegal activity, and still Binance allows it to happen while shrugging their shoulders like there is nothing they can do. 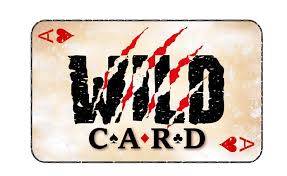 It's very obvious that Binance has a very strong privacy policy. It might suck when they fuck you over, but it's pretty sweet when they flip regulators the bird and protect your account from prying eyes.

Money that comes out of Binance hot wallets is TOTALLY ANONYMOUS except to those that have access to the Binance servers. Considering Binance now has multiple "spiritual headquarters" there is basically no way for regulators to get a look at what they are actually doing. A Google search revealed an interesting article:

Apparently Forbes did an exposition on how Binance avoids regulation. Pretty interesting stuff.

CZ called Forbes' reporting bunk and asserted that Binance follows all local laws, including those in the U.S. "Anyone can produce a 'strategy document,' but it does not mean Binance follows them," said Zhao, adding that the slide deck was produced by a third party, not his company. 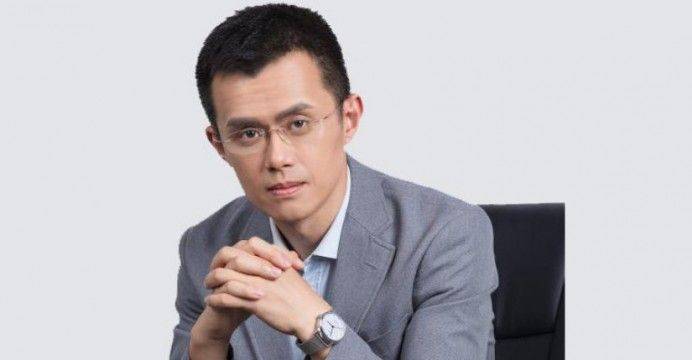 Binance in June 2019 unveiled plans to launch a U.S. exchange registered with the Financial Crimes Enforcement Network (FinCEN), a bureau of the U.S. Treasury Department. The exchange updated its terms of service the following day to bar U.S. users from accessing Binance's global hub.

Now this is super interesting, because I've been seeing articles all over the place about how Binance is working so hard to prevent Americans from using their international service. They aren't; I know from absolute experience.

Yeah, that was over 2 weeks ago, so where is my notice?
I'm still using Binance lol.

The only users that got kicked off of Binance were the ones that opted in to KYC on purpose and told Binance themselves they were American. The non-KYC accounts can still transfer 2 Bitcoin a day... which is needless to say more than enough for 99.9% of the population.

Earlier this month, The Block reported that Binance had begun sending out emails to users with U.S.-associated IP addresses. Anyone found to be logging in stateside was liable to receive an email giving them 90 days to switch platforms. However, with a virtual private network, users could still get around these restrictions.

Hm yeah or you could just not use a VPN because they aren't doing any of those things. It's amazing how hard they make it appear like they are trying.

Binance knows for a 100% fact that pretty much exactly where I live. They even tell me they know when I log in: 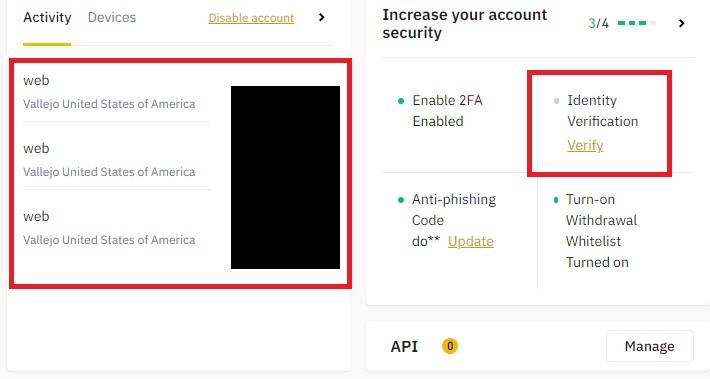 Yeah I don't live in Vallejo, but I live near Vallejo, and my bandwidth is obviously being routed through there. Regardless, it's very obvious I live in the United States. Binance is 100% full of shit. Honestly I should try to make another account to see if I'm grandfathered in or not.

And even if Binance kicked me to the curb I can still use Kucoin, Ionomy, Huobi, or just boot up the reccommended VPN service to obfuscate my country of origin... it's not hard.

Binance’s most recent crackdown comes less than a week after it announced it was suing Forbes and two of its journalists for defamation after Forbes published an article claiming the exchange had planned to set up an American subsidiary, ostensibly Binance.US, to “distract regulators with feigned interest in compliance.”

Yep, Binance is suing Forbes for calling them out. Lawls.

This is why they are putting so many articles out there about them trying so hard to adhere to regulations. It's all smoke and mirrors.

The cryptocurrency exchange alleges "millions of dollars" in losses as a result of what it describes as a "false and misleading" article.

The case, filed in New Jersey’s district court, seems unlikely to turn out in Binance’s favor, but that’s hardly the point. CEO Changpeng Zhao has a longstanding contentious relationship with reporting on the company. In the past year, he has used Twitter to threaten to hit TheBlock with a similar libel suit, and once casually referred to Cointelegraph’s staff as “evil journalists.”

On the other side of the fight

CZ admits it's not always easy weeding out US traders from the global Binance exchange.

“Basically, we do continually try to improve our blocking. There are sometimes a few guys who want to circumvent our blocking and still use the platform and we have to come up with a smarter way to protect that and when we do, we block them.”

He is so amazingly full of shit. I love watching him give all the regulators the run-around. It's hilarious; running circles around those morons. Stupid Americans... 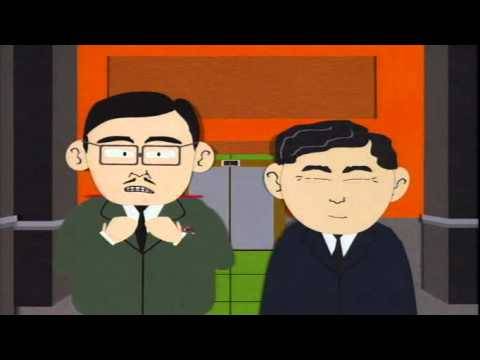 This is good for the cryptoverse.

Just like Facebook running point with Libra/Deim, Binance laying down roots all over the world with their tech is also equally useful. These huge corporations are crossing the line and defending our side.

Regulators will have no choice but to point their guns at the centralized Goliaths who pose the biggest threats. Meanwhile, our little network will go completely under the radar in terms of regulation. Pretty sweet deal.

Interestingly enough, networks like Hive are more resilient to regulation in the first place, even though they are currently far less powerful than the likes of Facebook, Binance, and others. It's much easier to slap a corporation with regulation than an actual decentralized network, so as time goes on even if they wanted to regulate the more decentralized networks, they have so much on their plate they won't even attempt it. 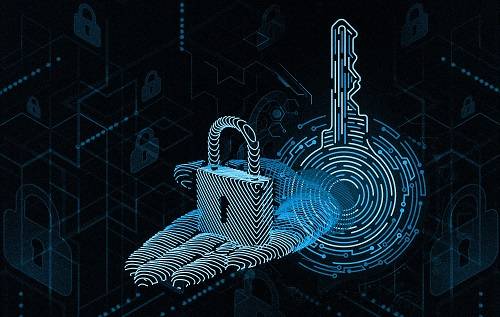 So of course if Binance corporate policy is to even protect the privacy of known criminals, they'll certainly do the same for all their users. Again, this is good for everyone, including Binance, which is why they do it in the first place.

All the funds that move out of their hot wallets are totally anonymous. Only Binance knows whose wallets are whose, and all that information is protected by their company. Considering how this is all going down, I'd say they are a pretty trustworthy company as far as protecting user privacy is concerned. Again, this boosts their reputation within the space and keeps them on the bleeding edge.

The idea that they are trying so hard to stop people from using their service and losing money in the process is absurd. It is simply a feint to the regulators; they might as well be flipping them the bird.

There are perfectly legitimate reasons to protect privacy, as I have stated multiple times. Without privacy, there is no fungibility, and without fungibility, you can't have currency. Privacy is the foundation of this entire ring of trust-nodes. Even the IRS, Secret Service, NSA, and government at large have confirmed this fact in on way or another. 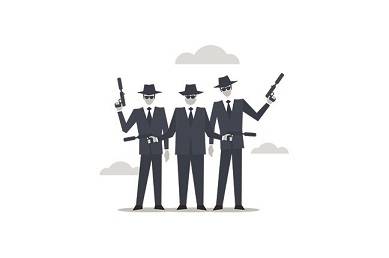 That being said, this is clearly mafia we are dealing with. These guys are game for a wide array of questionable or downright illegal action in order to maintain their positions of power. Now, they won't be knocking on the door in the middle of the night to break anyone's legs, but the biggest mobsters have always been the bankers. Once you have enough money you no longer have to break the law in order to stay on top, because you make the law.

It isn't ideal that corporations are jumping on the crypto train, but it is incredibly useful in many regards. The entire point of blockchain is that it is all-inclusive. We aren't allowed to pick and choose who is allowed to use this abundance technology; that's the entire point.

Binance is proving time and time again to be an ally of crypto, even if Hive has suffered some major collateral damage from their bullshit. I for one like having access to my mafioso crypto account.

Another great thing about all this is Hive's low low transaction fees of zero dollars. We can transfer any amount of Hive to Binance, Kukoin, Ionomy, Huobi, or any other non-kyc exchange, and essentially move Hive around for free no matter the volume. Pretty powerful stuff considering we could make these moves like $10 at a time if we were so inclined, which would fully eliminate the primary risks of using a centralized exchange. Not your keys, not your crypto.