Hive communities officially arrived in February 2020. Before this there was in a test phase that starting from October 2019. 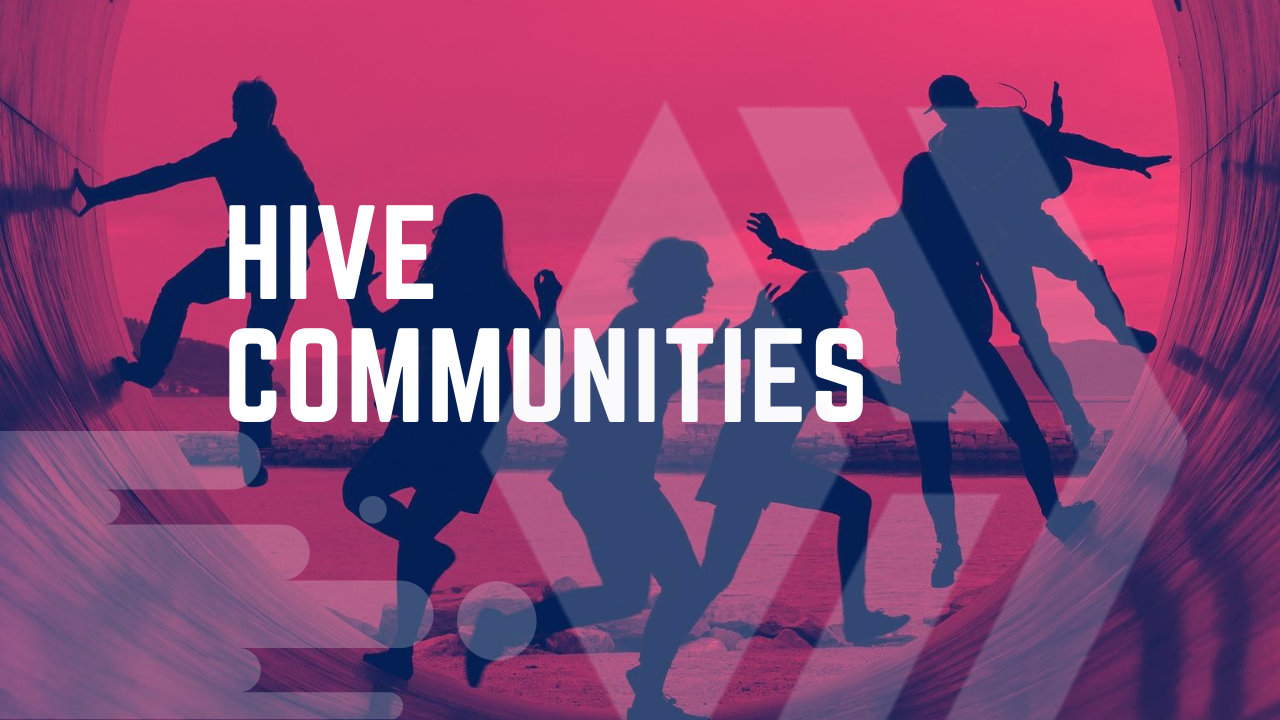 There have bees some well established communities on Hive, and some new coming in. Some of the communities already have their token as well on Hive Engine.

Here we will be looking into the following things:

As already mentioned, communities went live officially in February 2020, but they were in a test phase before that. The period above is from November 2019 till July 27, 2021. 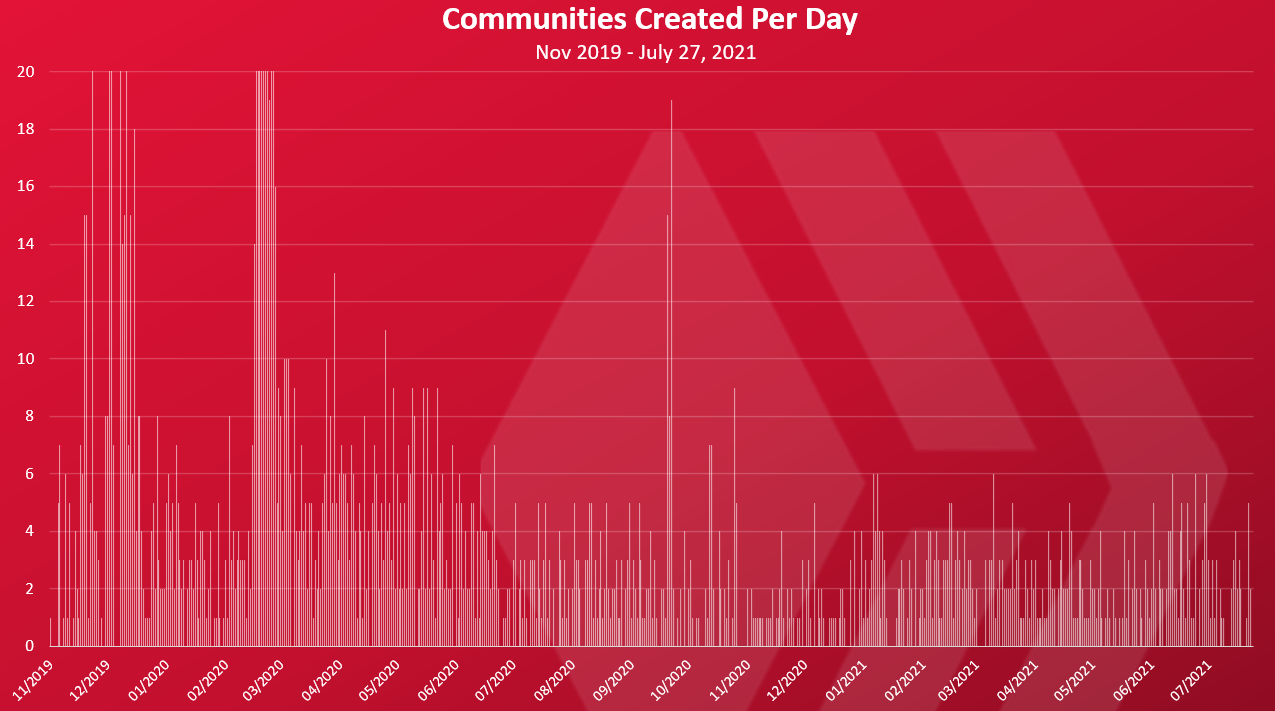 In the last period there is a few communities created per day, usually in the range of 1 to 5.

There are around 2650 communities now on the Hive blockchain. 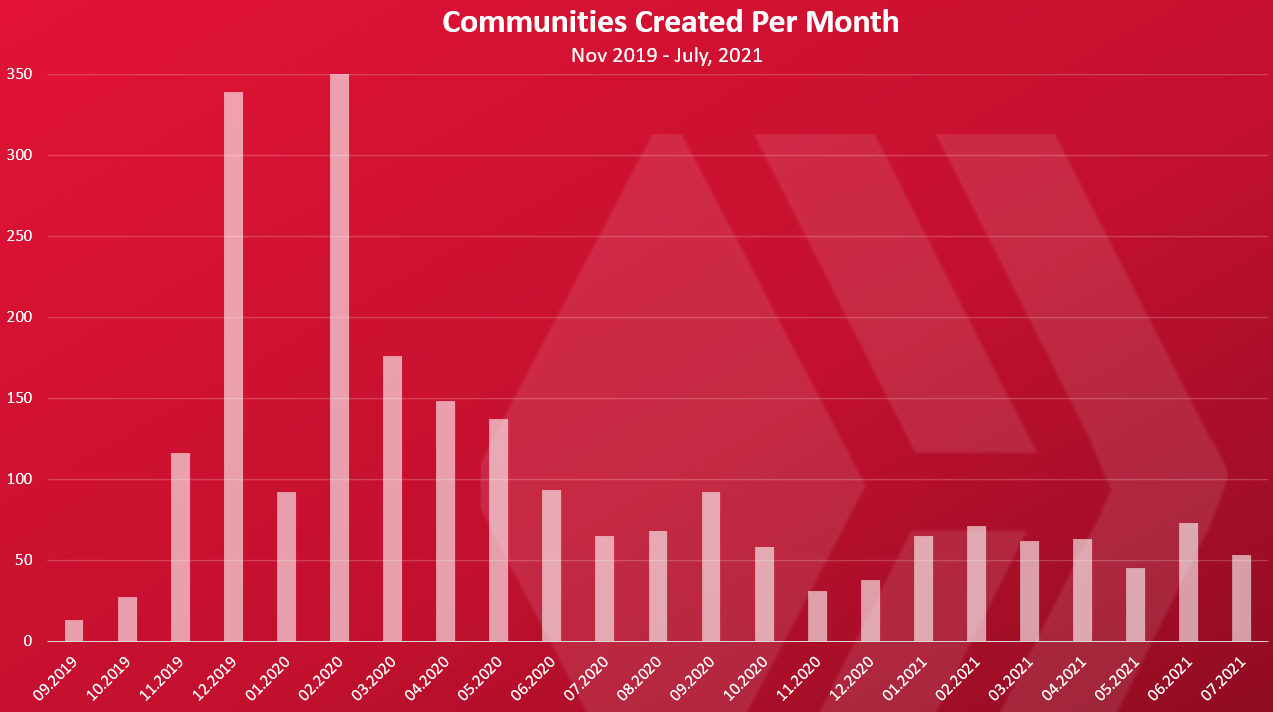 Quite a steady number of new communities per month around the 50 mark in the last year.

Top Communities By Number Of Subscribers

Who are the top communities on the blockchain?
We will be looking at this by more than one parameter, but for starters lets take a look at the most obvious one, the number of subscribers. 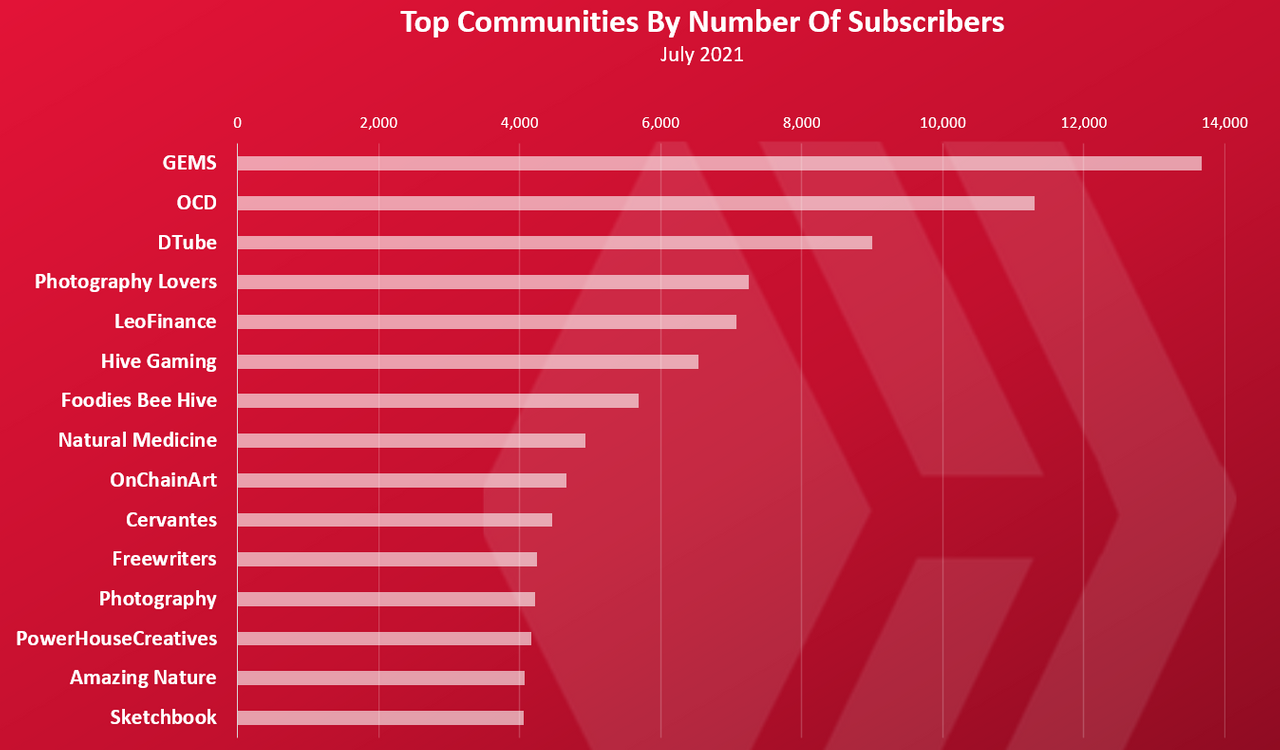 The GEMS community comes first with almost 14k subscribers, followed by OCD and DTube. Photography lovers, Leofinance and Hive Gaming in the top as well with more than 5k subscribers.

Overall, the numbers of subscribers in the communities keeps on growing.

Another interesting way to rank communities is the stake of their subscribers. After all we are on a DPoS chain 😊.
What is the stake weight of the subscribers in each community?
Here is the chart. 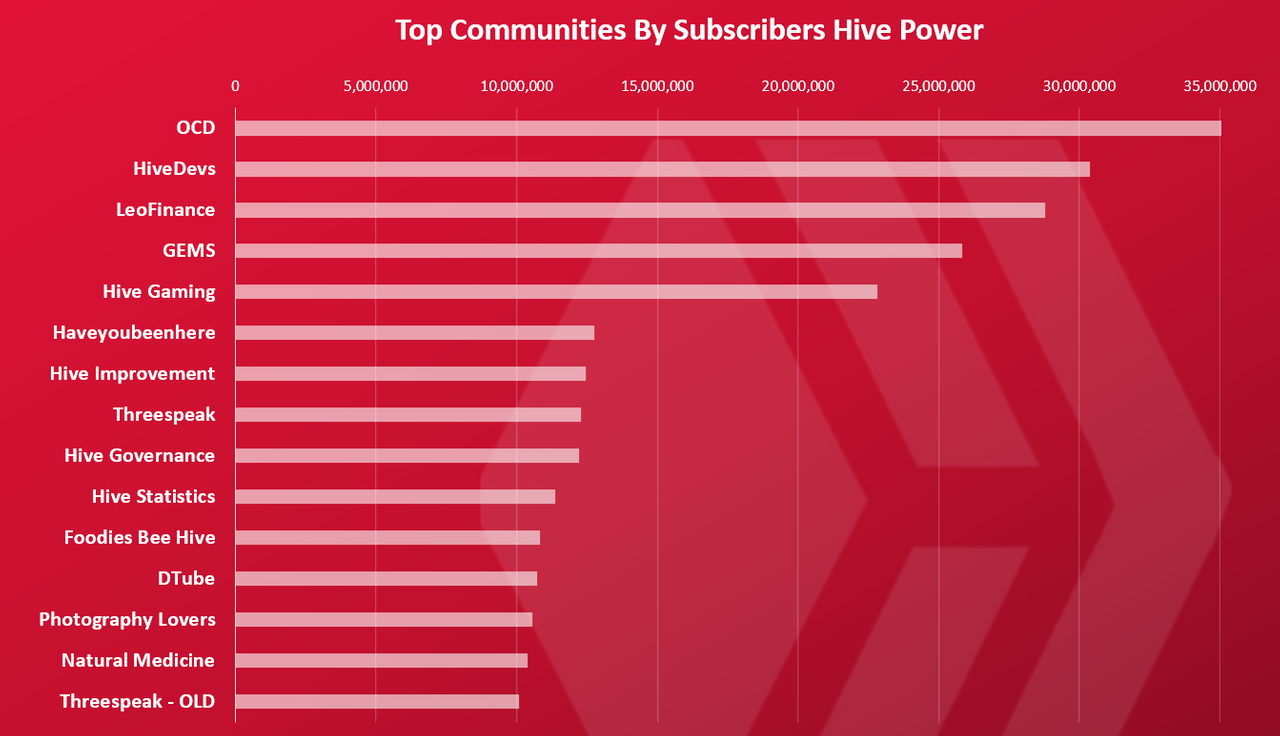 In this type of ranking the OCD community comes on top. The HiveDevs community is on the second place followed by LeoFinace and then GEMS. Hive Gaming on the 5th position.

The number of subscribers in a community and their stake is important. But more important probably is how active the communities are.

Here is the chart for the top communities by the number of posts made in the last 30 days. 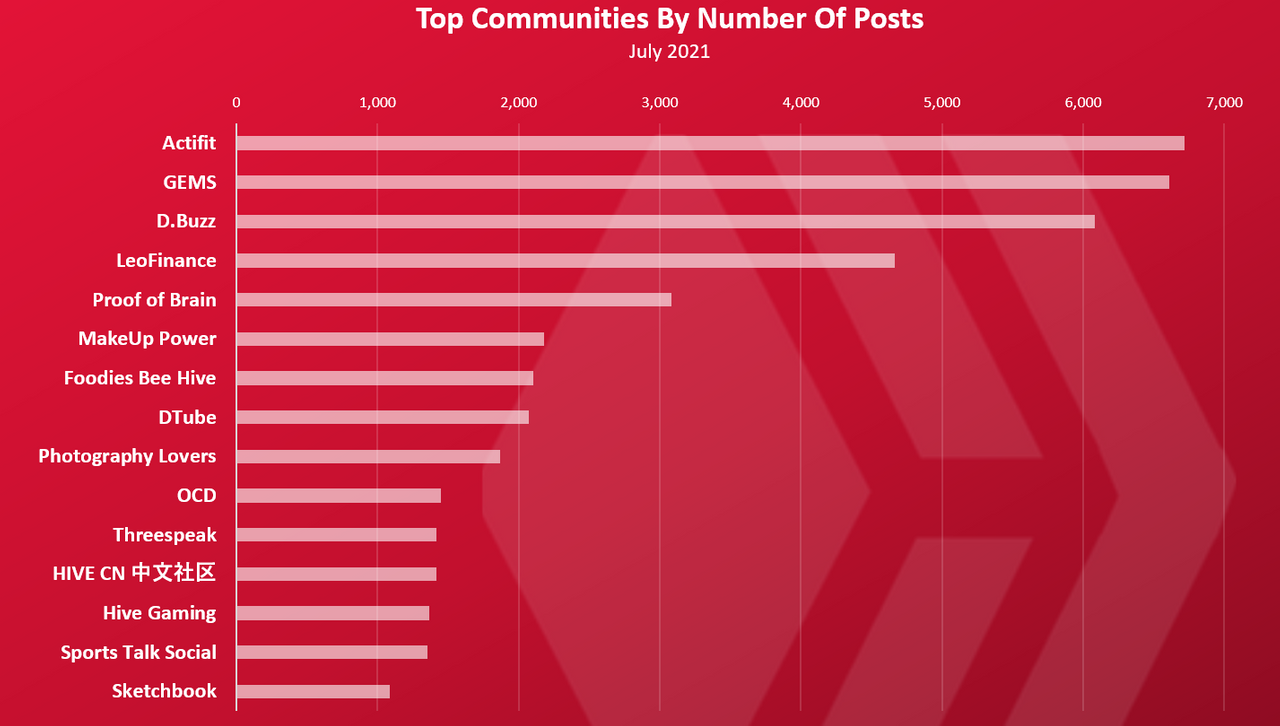 Actifit, the short form fitness app on the top, followed by GEMS and D.Buzz, another short form app. Leofinance on the forth place, and Proof of Brain is 5th. PoB is the new on this list.

What about active authors? How many in the last 30 days? 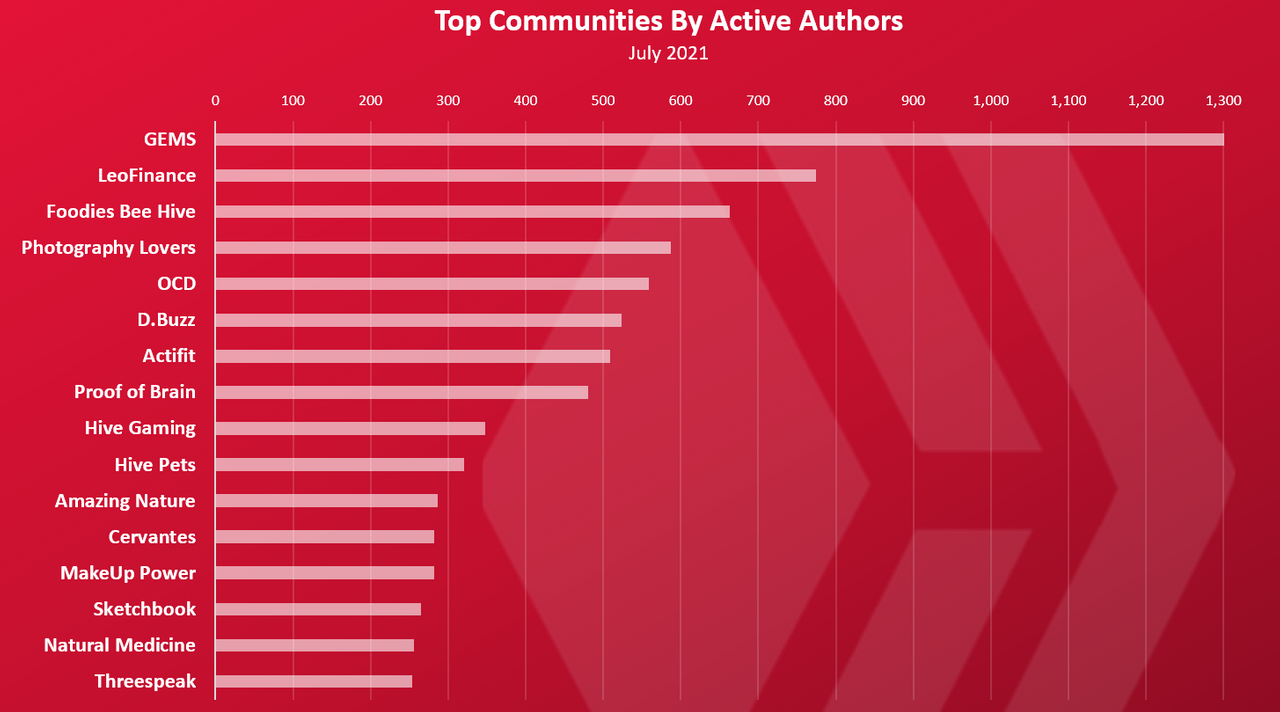 This can be basically MAU (monthly active users) per community.
GEMS is on the top here by a lot, with almost 1300 authors, followed by LeoFinance with almost 800 authors. Foodies and the Photography lovers in the top as well with more than 500 authors per month.

Hope to see more communities and more development on this side 😊. The gaming communities seems to be growing, Splinterlands and the Axie community with the axiebuzz initiative.