The COMedy Rumble: The alcohol disaster 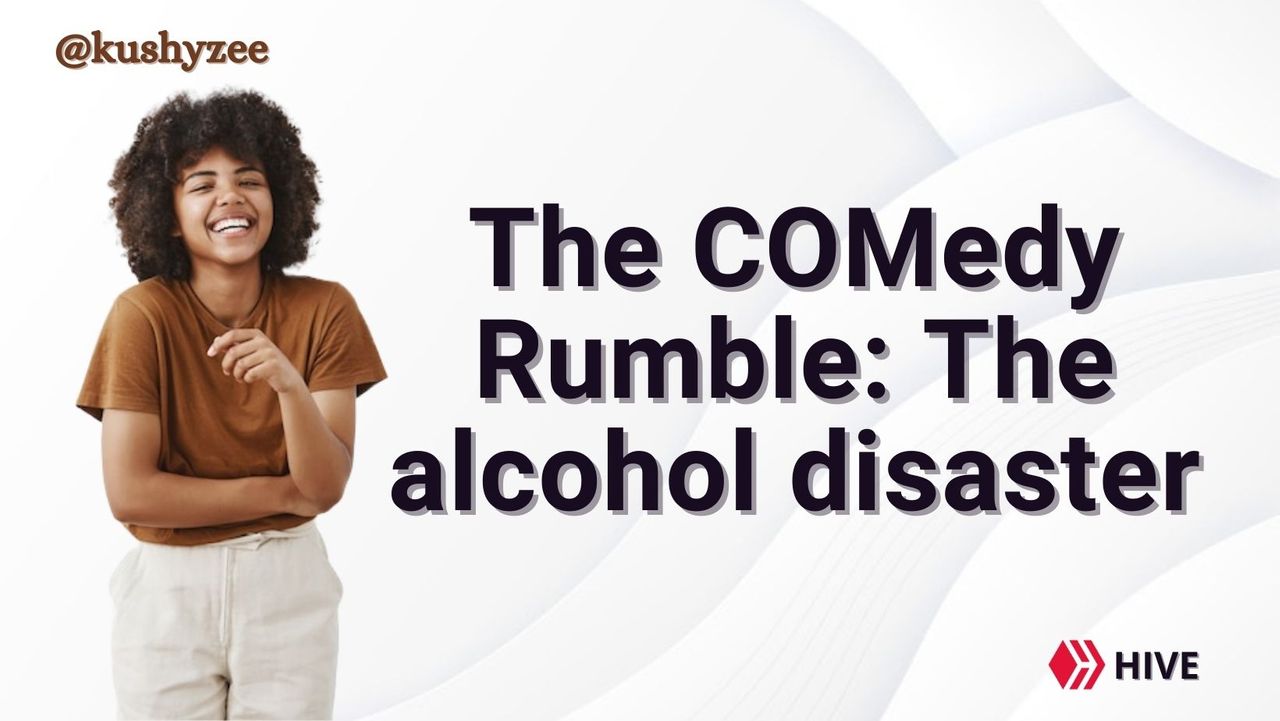 A big thanks to @george-dee for inviting me to hop on this challenge. I didn't even know about the comedy open mic community until I read George's entry for the one-month comedy rumble challenge. Don't know what I am talking about? Just click the link and read more about it.

Reading George's experience with alcohol triggered a similar memory I had a couple of years ago and I was just laughing while reading because I could relate to what he was saying. That was what inspired me to share my story as well, and it's something I haven't told anyone since the day it happened because it was very funny and embarrassing, let's get on with it, shall we?

It was my roommate's birthday and he decided to have a small party in our lodge to celebrate it. I followed him to buy drinks and some snacks needed for the party. He wanted to buy some mild alcoholic drinks but I advised him to get some of the stronger stuff too.

He told me that the people attending the party won't be able to take some of those liquors but I bragged to him that it's nothing I can't handle, I have been sneakily drinking my dad's alcoholic collection for many years and I can hold my liquor better than most adults, I have never even gotten drunk before!

We got two bottles of the strong stuff and only one was consumed during the party, leaving us with one full bottle of McDowell whiskey. "This is nothing, we can finish the whole thing later at night", I said to my friend. Night arrived and I was in bed playing with my phone, while my roommate was sitting beside me and filling my cup with whiskey.

"I told you I can handle it, this is a piece of cake! I have taken stronger liquor than this in the past and I didn't even get drunk, keep going!", I bragged, and he kept pouring, and pouring, and pouring....until my bladder got full and I decided to ease myself. I sat up and it felt like I had a building on my head. I looked at my roommate lying on his bed and he looked like he was swinging, and there were 3 of him, and also 3 beds 😂

"Anything wrong?", He asked and I replied; "of course not, I just want to ease myself". "Then go, go on and ease yourself", he said to me and I just laughed it off but deep inside I knew I was in a deep mess. How could this happen to me? I kept asking myself as I tried getting down from the bed, meanwhile the floor was looking like it was 100ft down and that just added to my dilemma because I am very scared of heights.

I summed up courage and got down from the bed, I planned on quickly rushing to the bathroom, emptying my bladder, and running back to bed before my roommate notice anything but there was one problem with that plan; I couldn't even move! I was standing and kept moving back and forth like a one-leg drunk pirate 😂 my roommate was already laughing at this point and I knew I have been exposed.

I just ignored the spinning room and something that looked like a unicorn right in my room and headed for the bathroom but I was almost at the door when I fell down face first. My roommate went out to call my crazy friends living in the same lodge and I could hear them laughing and making videos as I was on the floor wriggling like a big worm.

I was just there with a heavy head and what I kept repeating over and over again was; "God please let me live, I promise to never do it again" 😂 I actually thought I was going to die because of the way I was feeling. Did I forget to mention I threw up several times? I threw up so bad that I thought my soul was going to be pulled out as well.

I woke up the next day and the first thing I said was "thank God I am alive". I observed I was in my room and that made me realize I am still alive, at least I am sure heaven doesn't look like my room (maybe hell, but not heaven 😂).

I was feeling better that morning except for the pounding headache I was having and trust me when I say I prefer having that splitting headache to the hell I passed through the previous night.

My friends came around later on and they kept laughing about the whole thing. They showed me videos of me wriggling on the floor and begging God to spare my life, it was very embarrassing to watch and I wished the ground will just open up and swallow every one of us. They kept teasing me about how I was bragging that I can't get drunk, well I have learned my lesson and won't dare challenge alcohol again.

These days whenever someone offers me alcohol, I quickly imagine myself lying on the floor, begging God to save me again and promising never to take alcohol (again!). I rather just take soft drinks and stay sane, instead of going crazy and losing consciousness because of alcohol 😆

Thanks for reading and if you want to take part in this challenge and share some of those funny stories you have, then check out the comedy rumble announcement to get more details about it, as well as the rules and guidelines to follow.
Comedy Open Micthecomedyrumblelistnerdsproofofbraincomedyneoxian
kushyzee62
via ecency
$ 17.08
70
H2
H3
H4
3 columns
2 columns
1 column
30 Comments