Everything tastes better with salt. But wait till you add another magic ingredient. Below we will focus on his pungent friend which was even a currency, back in Roman times. Of course, we talk about pepper, or if I may be specific, one of the best peppers in the world – Kampot pepper. A touch of pepper magically transforms countless dishes and helps our bodies stay healthier. What is more, each type leaves a unique mark with its characteristics. Usually, we don’t take time to study humble spices, but when we do the rabbit hole opens up. Here is a little bit of everything we want to share with you after seeing the beautiful pepper farm in Kampot. Cambodia doesn’t have only amazing sunset, but also delicious Kampot pepper. This photo was taken at the La Plantation .

Let’s start with a mind-blowing number of plants in the Piperaceae family. Can you imagine how different are all those 3,600 species? To us humans only one really matters, the Piper Nigrum, a black pepper plant. The history of pepper cultivation in southern India dates back to 2,000 BC where it was first discovered. No wonder black pepper is heavily present in Ayurvedic medicine and Indian cuisine. The same plant provides pepper harvest from February till May for over 20 years.

Today’s biggest pepper producers are Vietnam and Brazil, where plants are heavily treated with chemicals to achieve high yields and low prices. Most of us see the pepper in the store, where it is ranging by colors rather than sorts. The famous green, black, red, and white quartet comes from the same plant. They only vary by ripeness and treatment.

First thing first, pepper indeed has the desired peppery kick greeting to the tongue. However, keep in mind, the spiciness and aromatics start to fade after 3 years, or sooner when stored improperly. The taste of pepper differs from the ripeness and variety and can be used almost everywhere – salt dishes, desserts, and even cocktails. Soil affects the pepper plant the same way as it influences the wine. Still, ground controls plants in many ways. For example, the best pepper in the world is grown in mineral-rich soil where quartz crystals are present. We are talking about the Kampot pepper, where climate and location offer the perfect conditions for growth. Another thing that we must mention when talking about the soil is how well the plant can spread its roots. That gives the peppercorn plant ability to receive needed minerals and nutrients, which affect taste the most. Kep and Kampot regions have the perfect quartz-rich soil and climate for the best pepper in the world.

Having a live plant in your home will provide you with oxygen, it is a joy to look at, and I didn’t even come to the taste. Light demands of a climbing Peppercorn plant are modest, it needs moderate indirect light or semi-shade. On the other hand, it is quite demanding regarding temperatures, because it demands eternal summer. Keep in mind that the peppercorn vine originates in Kerala, India. Water demands are also worth mentioning because the black pepper plant likes humid air and a drink sooner than later. Surely, the peppercorn plant will test your patience. For the fresh pepper berries, you’ll have to wait for 4 years. In the meantime, you can accept how quickly time flies and get excited about the future. Certified Kampot pepper is grown organically, plus a bite here and there makes the plant stronger.

As mentioned, Kampot pepper enjoys a special status as “The Pepper King”, meaning the best pepper in the world. How wouldn’t it be with the ideal combination of quartz-rich soil, tropical climate aided by the ocean breeze? In addition to suitable land in Kep and Kampot, growers are focused on Kamchay and Lampong pepper varieties, which are Cambodian sweethearts at least since the 13th century. During dry season pepper growers water each plant with about 15L of water every 3 days.

The most brutal time for both peppercorn varieties and people was during the genocidal Khmer Rouge rule. During that time this precious pepper was almost whipped out of the surface of Cambodia. The leading cause was the need for soldiers plus the international pepper trade was a reminder of French Colonial times. It took them a decade for traditional farmers to return to the crop of their ancestors in the early 2000s. Since then, the traditional growing practice without chemical fertilizers is in play for the certified Kampot pepper. Store and restaurant at the La Plantation is inside this 80-year old dining hall from nearby monastery.

That and more lead to Geographical Indication protection of Kampot pepper in 2010. As with other products, constant inspections are a must in order to keep the desired outcome. As a matter of fact, one ounce of organic white Kampot pepper costs up to 100 USD in 2020 on western markets. For that price, one gets high-quality organic pepper that is hand-selected and sun-dried.

If you are in Kampot, Cambodia it is a must to visit at least one pepper farm. The most known and probably the biggest one as well is “La Plantation”. When we tried the prized harvest after our plantation tour, we absolutely loved the aroma. The flavor profile of the finest pepper in the world is very rich, fruity and somehow difficult to describe. One can get a little bit of everything, depending on your imagination and time. We started with a slightly dusty nose, but that was gone after we chewed on well-ripe pepper berry at the first stop. By the time we got to the final tasting, we were certainly ready to slow down. Let’s check different Kampot peppers, shall we? One can say this is the best you get, ultra-premium grade pepper at the peak of maturity. Red Kampot peppercorns taste surprisingly fruity and contain the highest level of sugar. If you smell them, you can discover the aroma of dried apricots. However, freshly ground dried red berries carry a well-rounded cloud of the citrusy peel with an array of fresh berries, grounded by the eucalyptus and pine aromatics. They are the last ones to go off the cluster, often hand-picked off the stems. 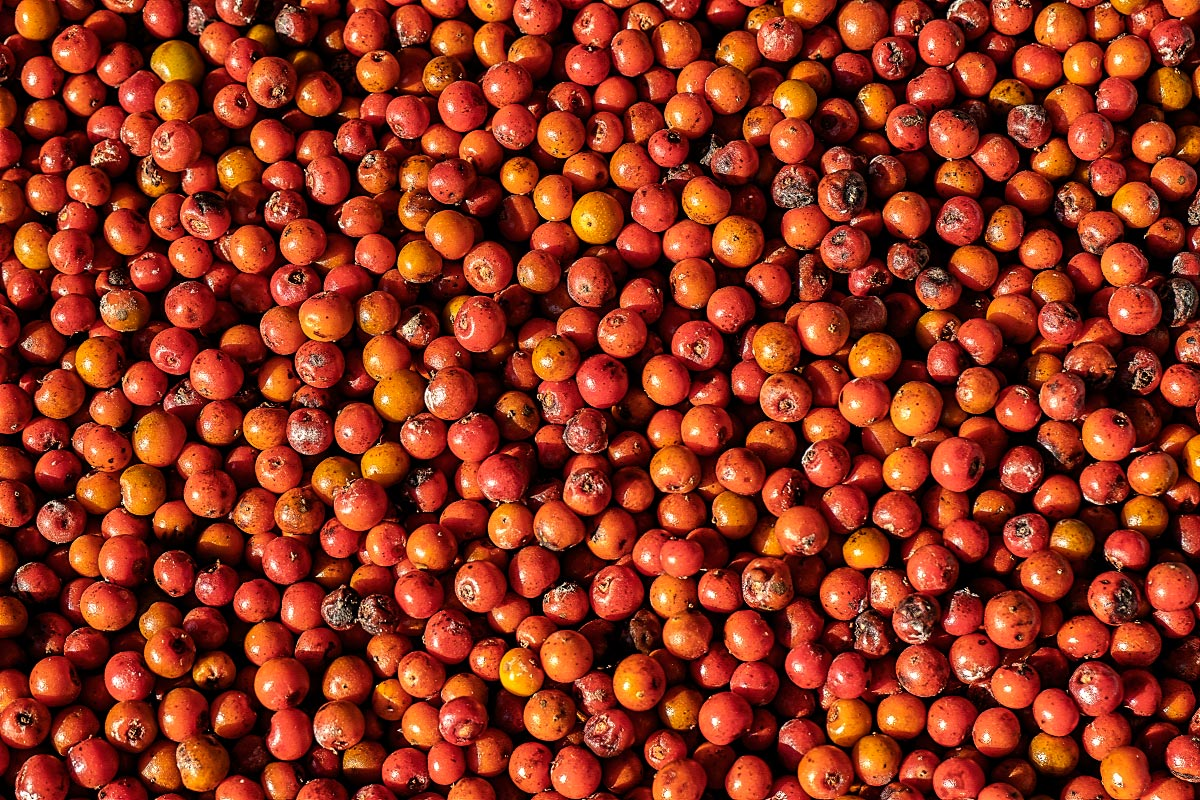 White pepper at La Plantation is produced from peeled red berries, leaving the seed to shine on its own. Ripeness supplies the powerful bouquet of delicate aromas and conceals spicy taste with hints of fresh grass and citrus.

Unripe pepper berries deliver more pinaceous notes with a minty and citrusy presence. This type of pepper is ready for harvest between March and May. Due to the early harvest, its spiciness is not as strong as in the well ripe or dried alternatives. Basically, green pepper is unripe and comes to the store as dried and canned. We loved it raw in Bloody Mary and stir-fried, regardless of techniques we were blown away by its floral to piney aromatics. When berries start turning yellow, they pick the pepper and give it a quick hot water soak. That way the berries are cleaned and skin gets black during the drying. Usage wise this is the most common pepper with a mildly sweet and most intense spicy kick with present botanicals notes.

Pepper will never grow out of fashion; it is too important. This versatile spice has been around for over 4 millennials. In that time, it has found its way into Ayurvedic and Traditional Chinese medical protocols. Lady is ready for a new cook-off. Most sought after are stir-fried crabs with fresh green pepper.

There are many reasons for that, including the fact that pepper is high in antioxidants and has anti-inflammatory properties. Berries of the Piper Nigrum plant are scientifically proven to fight free radicals and chronic inflammation. Piperine presence in the berries improves memory and benefits the brain in many different ways. As a matter of fact, when you add the edible black gold to your meal it increases nutrients absorption and supports digestion. Who hasn’t heard that resveratrol and curcumin don’t do you any good if they are eaten without black pepper? A pinch of black pepper increases nutrients absorption and helps digestion among other benefits.

For those of you who don’t like the magical Piperine bite, let me share a thing or two about the pepper essential oil benefits. When mixed into the carrier oil it relieves pain in case of spasms or arthritis. Black pepper oil is no stranger to those who are after the radiant, rejuvenated, and evenly toned skin. It should be a go-to option for skin detox if you happen to have skin impurities, infections, or allergies. One-third of world pepper comes from Vietnam, while Brasil is the second-largest producer. Both are known for the heavy use of chemical pesticides and fertilizers.

As you can see Kampot pepper is not only a delicacy but also a medicine. Pepper has many health benefits and it is a king among the spices. You can combine it with sweet, salt, drinks, you name it. If you are looking for one of the best peppers in the world, you need to go to Kampot, Cambodia, and try this outstanding Kampot pepper.