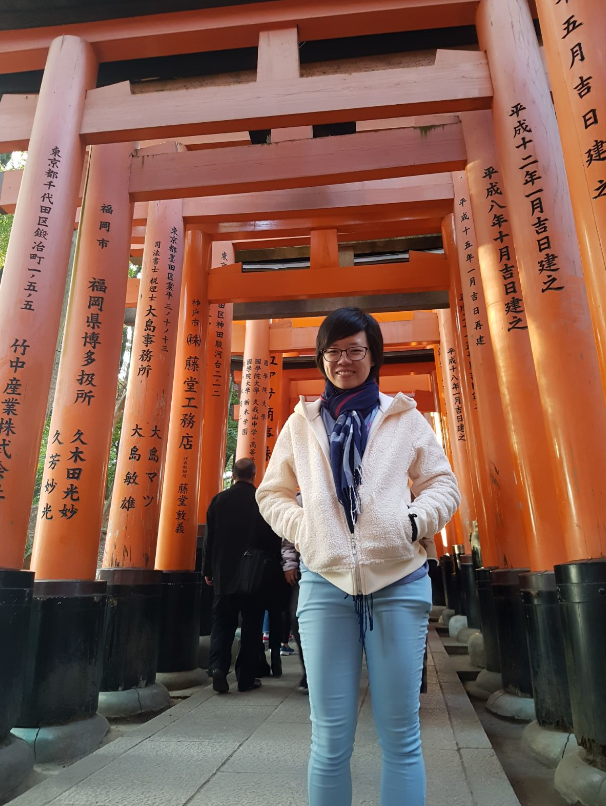 If you missed the last couple of posts, we're currently on a new journey through Japan with my family and Sean, traveling from Tokyo to Osaka! Since we've been here before but it's my relatives' first time we had to bring them to all the popular spots we visited previously already, but it's all good.

Last week, we took the train from Osaka to Kyoto and all the ladies went to try on kimonos! We had booked an Airbnb experience online for kimono rental and got to choose the kimonos and get dressed up by the staff there! They were so helpful and patient with us and even did my aunts and mum's hair!

Then we went outside an took a crap ton of photos! It was such a unique experience putting on a kimono and walking in it, and this is gonna sound girly but I felt like a beautiful princess!

Anyway, I ended the post right after our lunch, after we returned the kimonos to the rental shop, because we were on our way to another special place!

We headed to the nearest train station because the place we were going to was quite a ways away from the kimono rental shop.

This was what the station looked like and I thought it was so cool! If you can read Japanese, you already know where we're going I'm sure.

From the station, we had to walk a bit to reach the special place, and I managed to take this shot of the station!

This shot is reminiscent of a similar one we took in Paris!

Soon we arrived at this street full of small shops!

There were all these small shops selling souvenirs and knick-knacks lining the avenue.

That must've been a nice shot with the reflection on the water.

It was quite a ways away but it was a nice day for a stroll so I didn't mind. And lovely weather too!

And it was nice to experience the hustle and bustle after our day in the park.

Most of them were tourists though, and I do generally try to avoid crowds as much as possible.

But it's not really that plausible when you go visit a famous tourist spot during peak travel time..

Because the place we were visiting, was the famous Fushimi-Inari Taisha! Which if you didn't know is an important Shinto shrine famous for its thousands of vermilion torii gates, which straddle a network of trails behind its main buildings. The trails lead into the wooded forest of the sacred Mount Inari, which stands at 233 meters and belongs to the shrine grounds.

Fushimi Inari is the most important of several thousands of shrines dedicated to Inari, the Shinto god of rice. Foxes are thought to be Inari's messengers, resulting in many fox statues across the shrine grounds. Fushimi Inari Shrine has ancient origins, predating the capital's move to Kyoto in 794. (Source: Japan-guide)

They had such majestic temples there, and with the evening sun (at 4pm) it was quite a splendid sight!

It was extremely crowded though - tourists everywhere! It was tough to get a good shot anywhere, tbh.

I finally managed to get a shot of this part of the shrine with nobody blocking it thankfully.

And Seany got a pic of me here. Unfortunately I'm not too sure on what all these small sections are for. I assume it's part of some old tradition though.

It was really super crowded, and we wanted to quickly head over to the place with the thousands of gates since we read that there isn't much artificial light up there and it gets really dark and spooky when the sun sets.

But looks like everyone else had the same idea too.

It was ridiculously difficult to take any good shots with so many people around, so I just snapped what I could.

I tried to capture the classic shot of all the gates but dang it's so difficult with all this people around..

There were some fortunes written on some of the gates too! And a couple of kimono ladies had come here to take photos. Maybe next time Sean and I will do the same?

There were these random stone gates that broke the chain though, but still looked cool nonetheless!

And here was the crossroads with 2 long aisles of smaller gates! But the banner said to go the right way so we didn't really have a choice. I guess maybe the left was blocked or unsafe.

This is the entrance to the torii gate-covered hiking trail, which starts with two dense, parallel rows of gates called Senbon Torii ("thousands of torii gates"). The torii gates along the entire trail are donations by individuals and companies, and you will find the donator's name and the date of the donation inscribed on the back of each gate. The cost starts around 400,000 yen for a small sized gate and increases to over one million yen for a large gate. (Source: Japan-guide)

I read that the entire hike to the summit of the mountain and back takes about 2-3 hours! Maybe we would've done that if we didn't have my family around, but after a while of walking, we got bored and started turning back.

I thought this was a cool shot though!

It was so tough to get a good shot with decent lighting too, since the sun was slowly setting. But I thought this was a good one:

And this was okay I guess, except for that lady in the background..

After about half an hour or so, we arrived back at the entrance.

And I managed to get this shot of the temple!

Here was the full map of the shrine grounds btw:

Stepping through the shrine after that short hike somehow made me feel special, or blessed in some way.

All the buildings were truly such a marvel. And so well-preserved too!

It was slowly getting cold with the wind and the sun setting.

So after a couple more shots, we started making our way out of the shrine.

Even though it's a very touristy spot, I highly recommend visiting Fushimi-Inari at least once. It's truly a spectacular place that you have to go and see for yourself.

Anyway, we left for the train station shortly after that.

And headed back on the shinkansen on the way back to Osaka!

And that's gonna be it for now! Tune in next week to see what we get up to in Osaka at night!