This post is part two of our Schäfler Ridge hike in the Appenzell region of Switzerland. After reaching the ridge we hiked back down the mountain to the Wildkirchli restaurant. There we stopped for a drink before continuing on down to the town of Wasserauen, the place that we had parked our car for the day. If you are interested in reading part one of the hike you can click the link at the bottom of the page. The clouds were rolling in on the mountain and visibility was quite low on the ridge so it seemed like it was about time to head back down the way we came. We traveled back along the switchback path and once again passed the goats that were grazing on the mountain pastures. As you can imagine, weather and visibilty can change quite rapidly on a mountain. One minute you might be standing in a dense fog and the next mintue you might find yourself in sunny, clear open skies. It really just depends on how fast the winds are blowing. We were pretty lucky in that the skies opened up again as we began our decent. It can be really cool to hike in the clouds but I personally find it much more enjoyable when things are clear. It's nice to be able to see your surroundings as well as the views of the mountain. Overall, we made our decent quite quickly. I didn't time it or anything but if I had to guess I would say that it took us about an hour to hike up to the ridge from the Ebenalp cable car and only about 30 minutes to hike back down. We traveled along the same path that we had while making our way up to the ridge, so the views were mostly the same as before. I didn't take nearly as many photographs because we had already seen everything so that probably sped things up a bit for us as well. 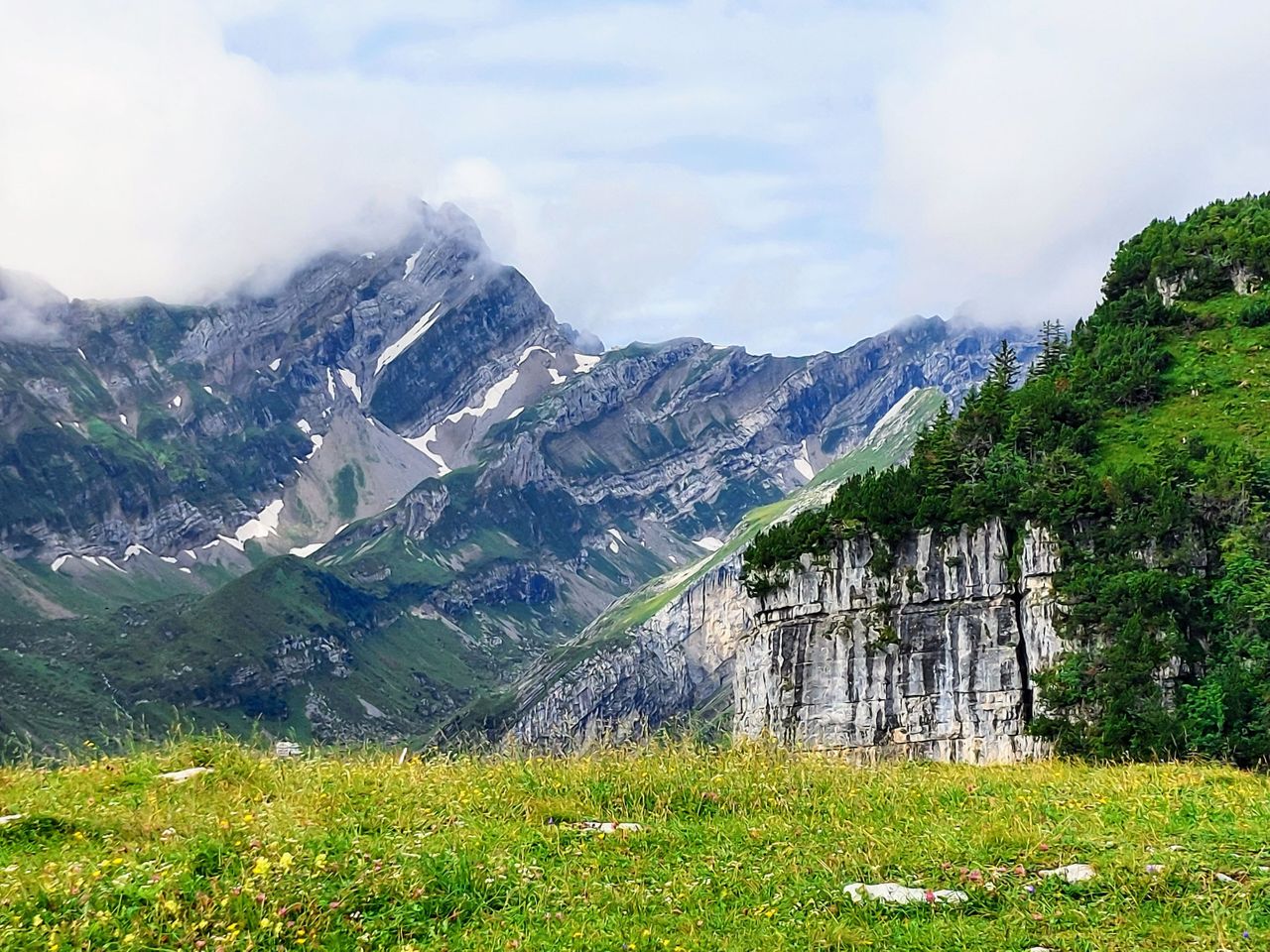 At one point I did stop to take a selfie though. Here I am squinting into the camera. The views are spectacular all along the hike and they are quite different on each side of the path. On one side is the valley where Lake Seealpsee is located and on the other side are rolling hills of green pastures with narrow roads that connect the many farms to the small villages located in the area. Near the Ebenalp cable car the terrain is a lot less steep in comparison to higher up near the Schäfler ridge. As we moved down the mountain we saw fewer and fewer goats and more and more cows grazing in the grass. Funny enough, seeing cows and hearing cow bells are one of my favorite things about the country of Switzerland, which is probably why I take so many pictures of them. The hike down from Ebenalp is actually pretty cool. It has several unique and unexpected features along the way that make for a really interesting experience. For starters the walking path actually travels through the mountain itself, through a natural cave located in the side of the cliff. The cave is quite long but it's wide enough to accommodate several people walking side by side, which is a good thing because it was quite busy in that area when we went through. The cave is lit by a few lights but it's very dark inside, to the point where I couldn't even see the our dog walking only a few steps in front of me. The path is smooth though and the few stairs built into the rocks are low to the ground so tripping and stumbling wasn't really an issue. The cave exits right next to a small cabin and near that is a chapel built into another shallow cave in the cliff face. I didn't take a picture unfortunately but I read online that service is still held in the chapel once a month. Church in a mountain - amazing! From there the path becomes much more structured as you approach the Wildkirchli restaurant. The path is quite wide as you can see, but when we rounded the corner I noticed a large gathering of people that I at first thought was a que for the restaurant. It turned out to just be a line up to take photos of Wildkirchli though. It really is a prime location. The restaurant was busy both inside and out but surprisingly there wasn't a que of people waiting to be seated. We found a table immediately on our arrival. However, we did end up moving to another location fairly quickly. The table was only partially covered by an open umbrella which happened to be directly beneath a small trickle of water that was falling from the cliff above. It wasn't much but was still enough to continuously splash water all over the seats. Our next location was dry though and had a much better view, so I would say that it all worked out in the end. We had one drink at the restaurant and then paid our tab before continuing our trek down the mountain. You would think that walking down a mountain would be easier than walking up but in actuality it's often much more difficult. ​ The path in many places can be quite steep and the steps (if there are any) are typically very large, so the decent tends to really do a number on your knees and shins. Walking up a mountain is always much more tiring but I personally find walking down a mountain to be much more painful. Walking down is like a continuous and relentless hammering on your joints and it doesn't take long for your legs to get weak and wobbly and for your shins to start to burn. That's the way it is for me at least. I personally prefer to walk up a mountain if I have the option. I will choose being tired over having sore joints any day. The path down from the restaurant was only wide enough for one person and you couldn't really pass people unless they stopped and let you by. People were traveling in both directions as well (up and down) so it was quite busy in more than a few locations. Eventually the path emerged from the trees though and we found ourselves walking along a much wider road that made its way into a very picturesque valley. All said it probably took us about an hour and a half to two hours to get back to our car from the Wildkirchli restaurant. Overall the hike from the Ebenalp cable car to the Schäfler ridge and back down the mountain was an incredible experience and definitely ended up being a highlight of our trip.

Well, that's it for now. If you're interested in reading more about this hike and our trip to Switzerland then stayed tuned. The next post will be about the small town of Appenzell. For the previous post, click the link below. Thanks for reading.