My second visit to Hue was longer than I expected. I hadn't wanted to return to this city, but circumstance led me back. I'm glad I came back because I got to see a lot of things that I'd missed on my first visit. 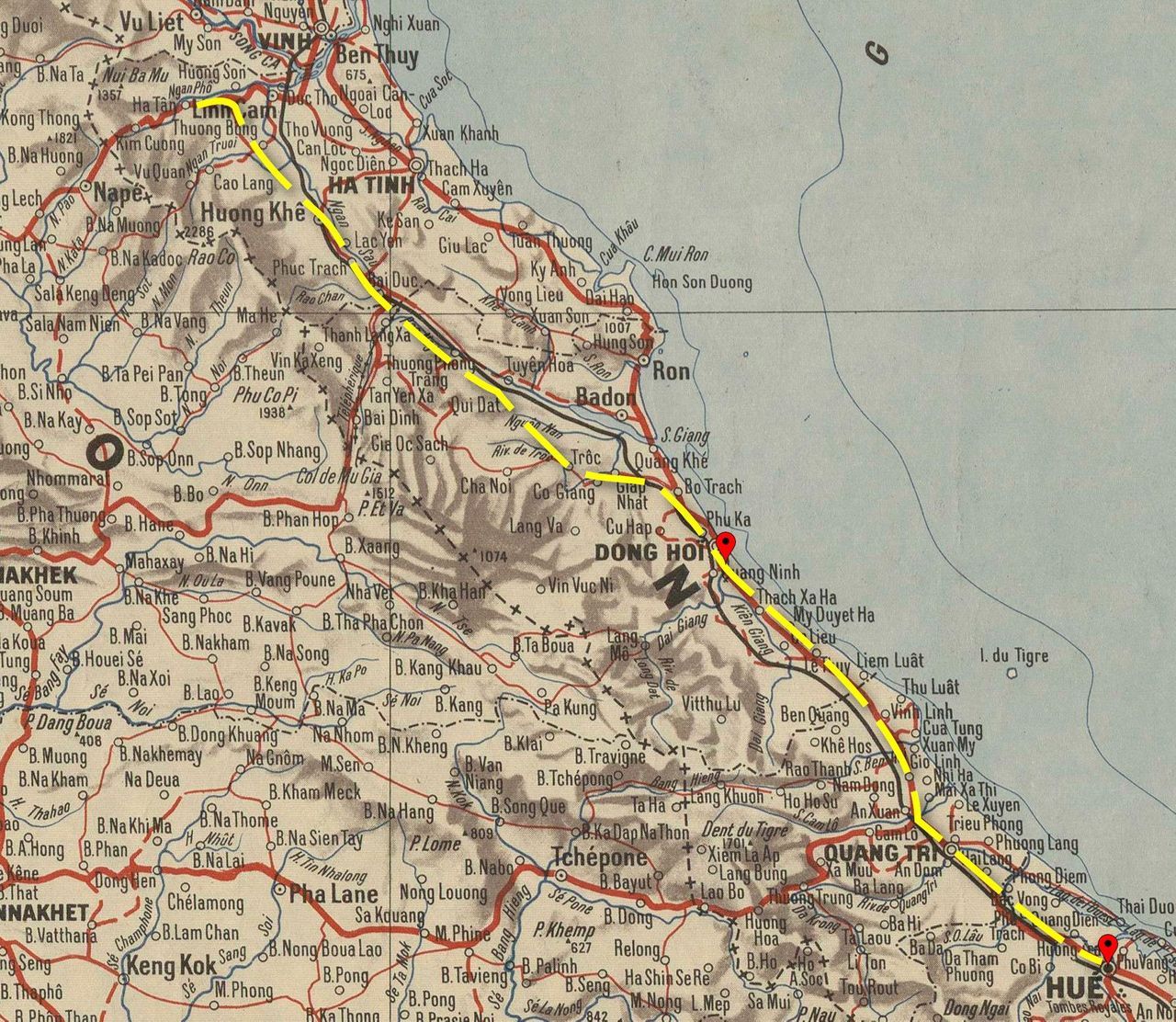 Getting to Hue took a rough couple of days. It was the first time in over a year of traveling where I thought I really might have to spend the night on street.

I left Pho Chau after having some coffee and I thought I'd get a room near Phong Nha Ke Bang national park. It had looked like a cool place and they had a lot of hotels.

I pulled into the town and stopped at the first hotel. They didn't have any rooms. I went to the next place, no room. I went up and down the street and every single room was booked! There was a holiday in Vietnam and everywhere was booked.

There was a funny cultural miscommunication that caused me a lot of confusion. In the Americas if we put our hand out and tilt it side to side, it means kind of, maybe, a little bit, more or less. It's not yes or no. If someone asks if you liked the food and you shake your hand, it doesn't mean no and it doesn't mean yes. It means "sort of".

In Vietnam a very similar hand gesture means no. So I was going to these hotels asking if they had rooms and they would shake their hands. To me they were saying "sort of", so I would stand there looking at them thinking they meant a room might be available. Then I would say "Soooo... there's a room?" No. It took me a while before I figured that one out. 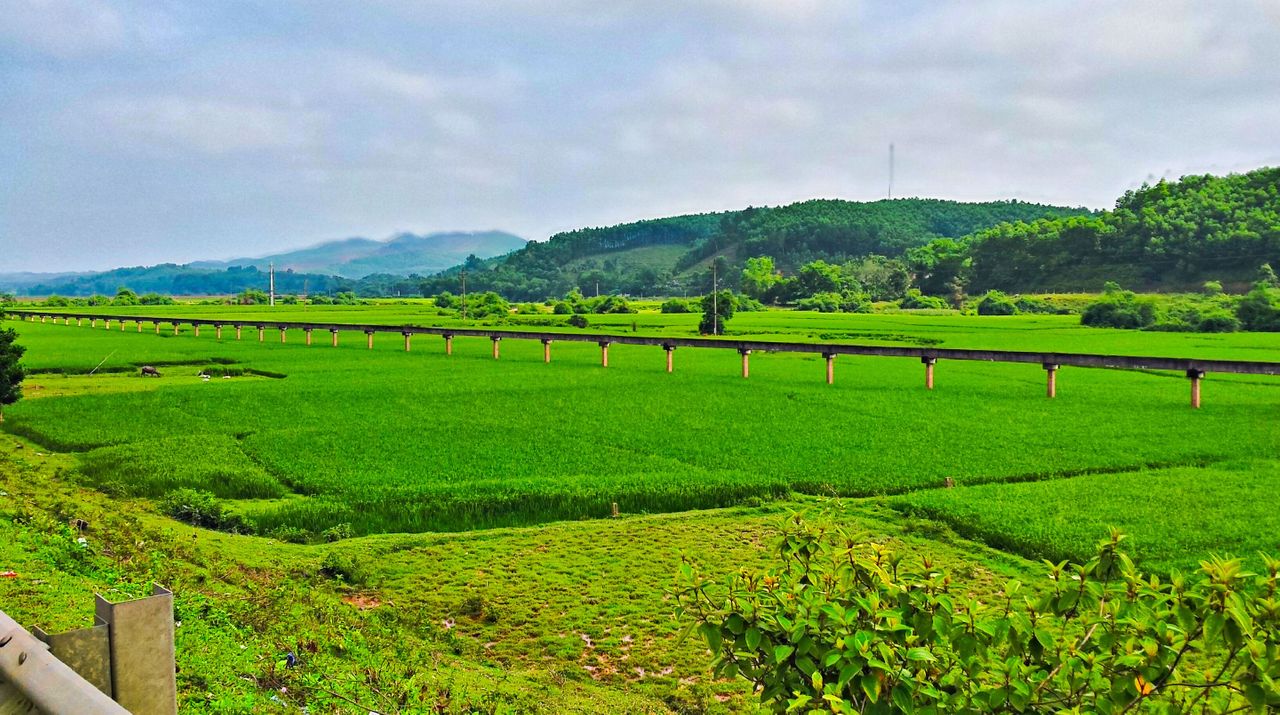 Dong Hoi was really close so I figured I would go back to the hotel that I stayed in previously. It was a decent place and the girls who worked there were super nice.

I went to the hotel and they were booked up too. They called around for me and every hotel in the town was full. At this point I was starting to get a little worried. The holiday was just starting up and the hotels would be full for the next 4 or 5 nights. 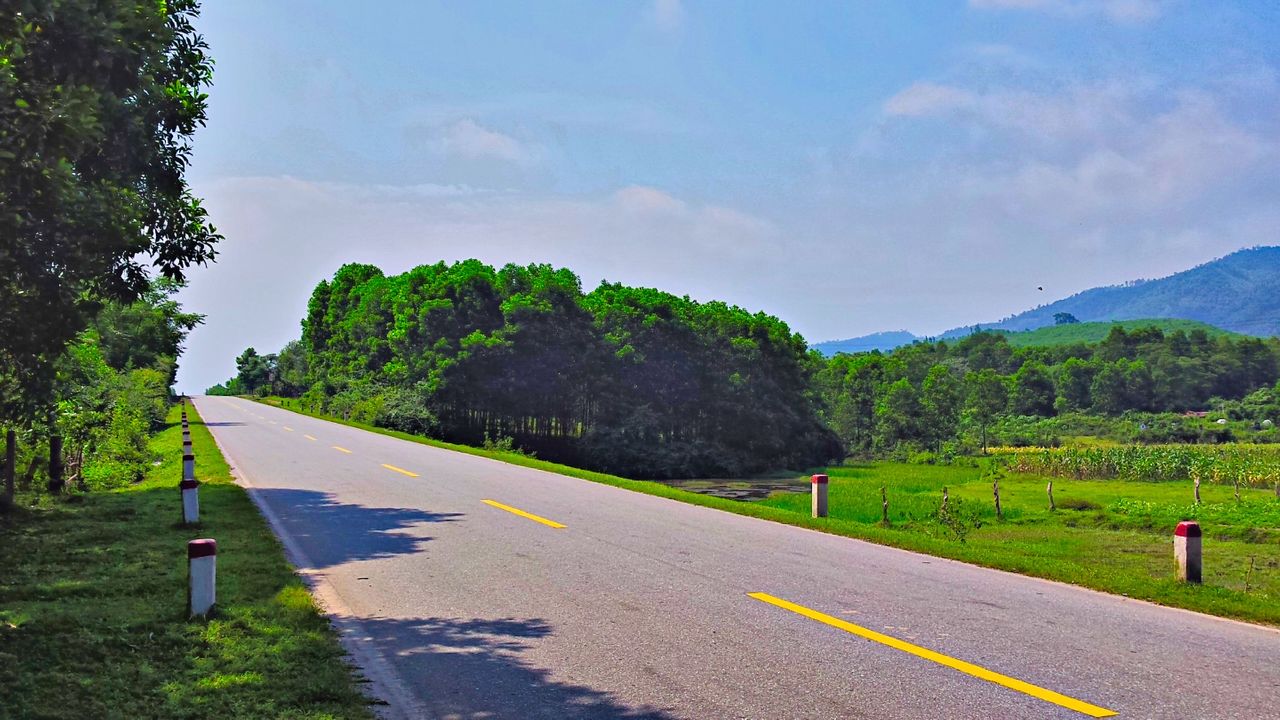 It was 3 or 4 in the afternoon and I knew that I didn't have enough time to get to Hue, but I decided to get on the road and see what I could find.

I got on Highway QL1 which is super busy and not fun to ride on. After about 30 - 60 minutes of riding out of town, I spotted a hotel sign. I stopped and was able to get a room for 4 times the normal price. I would have paid 10 times the price!

That night I started researching and found out about the holiday. Normally I didn't like pre-booking, but now it was mandatory. I figured Hue was such a big city that it must have lots of hotel rooms. I booked a room and felt good that I would have a place to stay on the next day. These photos are from very early on my first day of riding. After not finding a hotel room, I was too worried to stop for photos

The next day I rode into Hue and found the hotel that I booked. The first floor of the building was an internet cafe. The guy at the desk told me that he didn't use booking.com. Someone had set up a scam account and there was no room for me. I ended up getting my money back, but not having a room was what hurt the most.

So I started going to every place I could find in Hue. All of them were full. Luckily for me a local guy saw me and we started talking. I explained that I couldn't find a room. He said he'd help me search if I gave him some money. I agreed and we drove all around Hue for about 2 - 3 hours. We went way on the outskirts of town, we went downtown. We went all over the place. Finally we went to a place right across one of the bridges (Dap Da?). They had a room and I instantly booked it for 4 or 5 days, until the holiday was over. While I was filling out the paperwork for the room, a family showed up looking for a room. I had gotten the last one!

I was super grateful for my guide and gave him a good amount of money. He said he'd take me on some tours in the next few days. I didn't really want tours, but I wanted to thank him with some business and agreed to the tours. 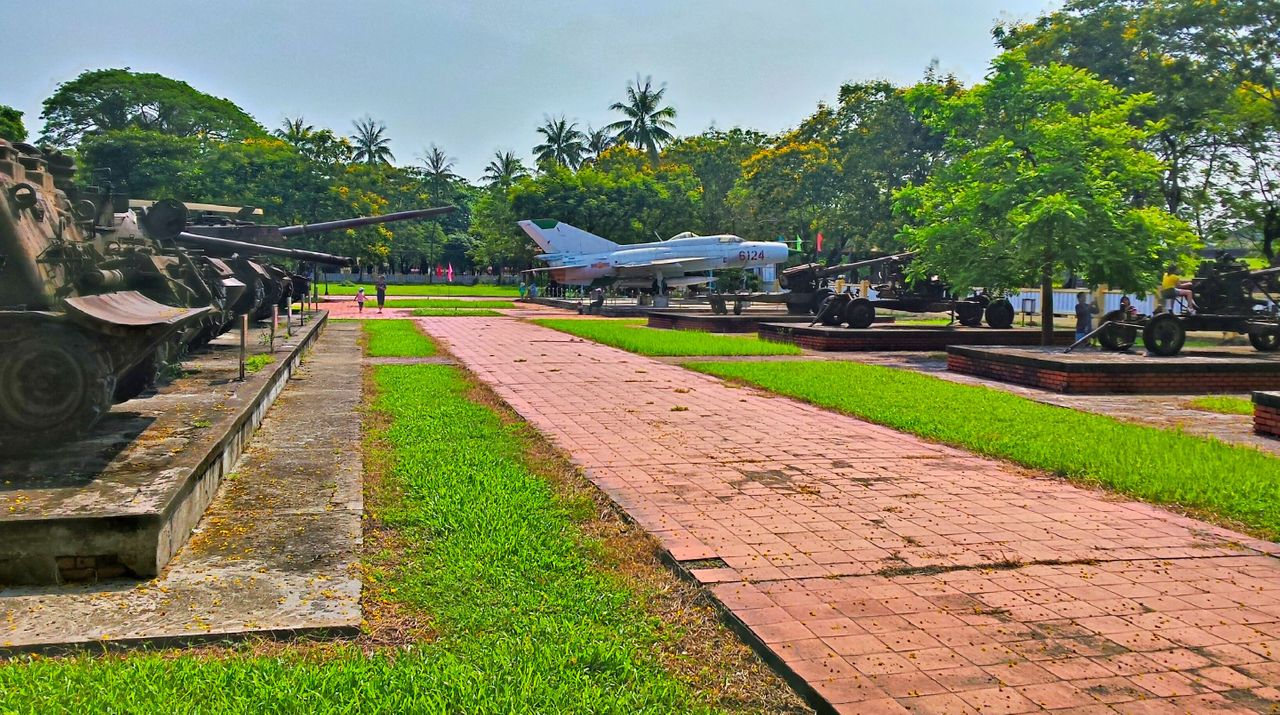 The next day the guide showed up and he took me to the war museum. It was OK, but there were so many tourists in town that every tourist attraction was too crowded to be enjoyable. 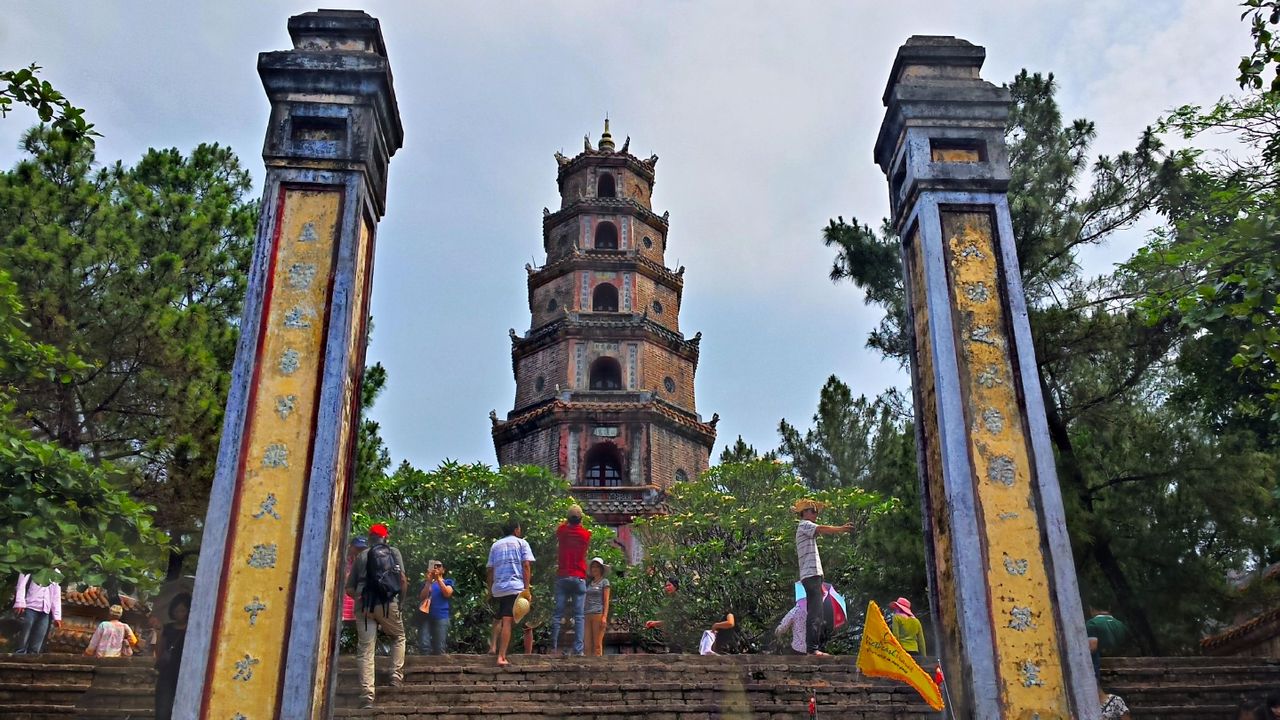 We also went to a really crowded temple. 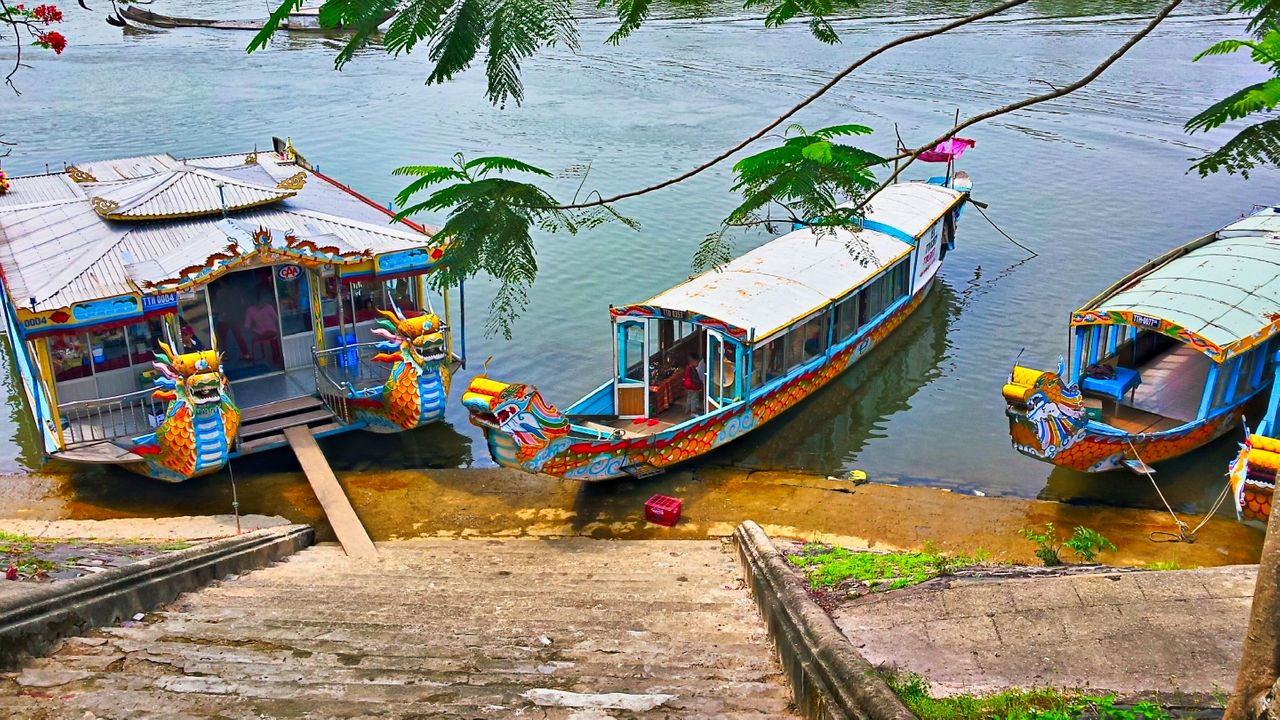 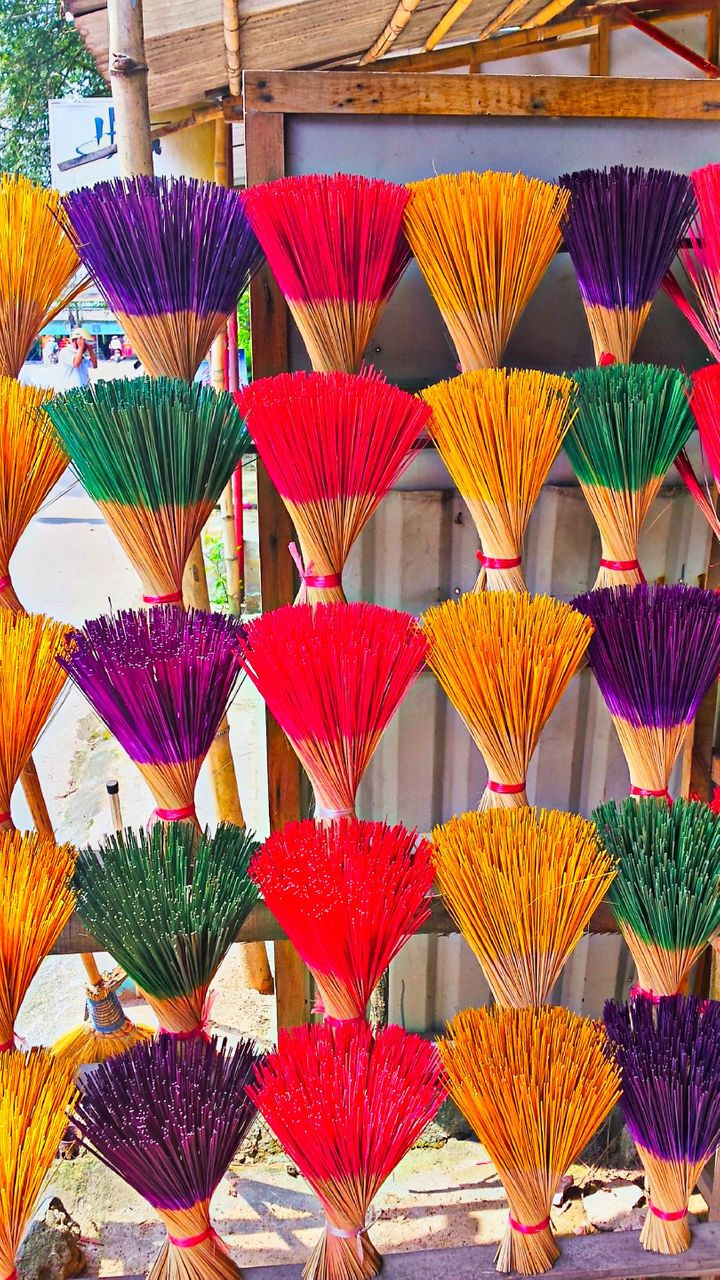 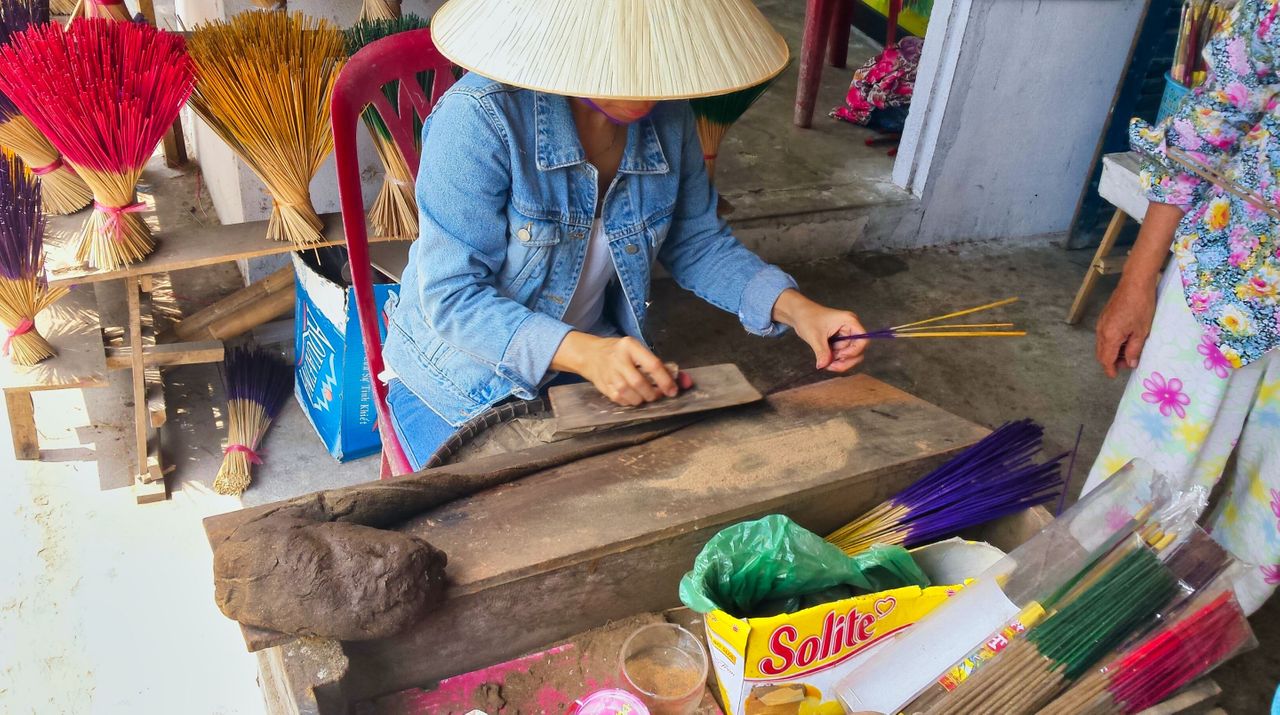 We went to a place where they made incense. It was OK, but I was kind of tired of the tourist stuff. 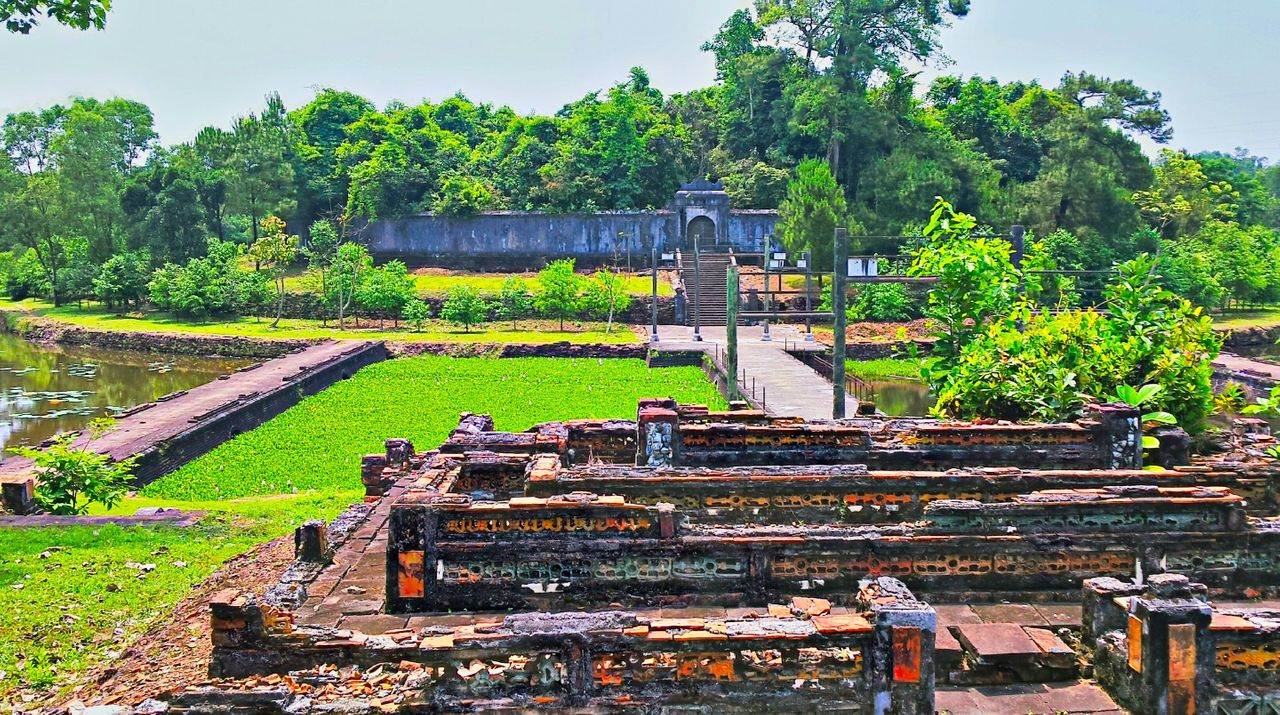 There was a cool ancient tomb (I'm pretty sure it was a tomb, maybe a palace?) that we visited. 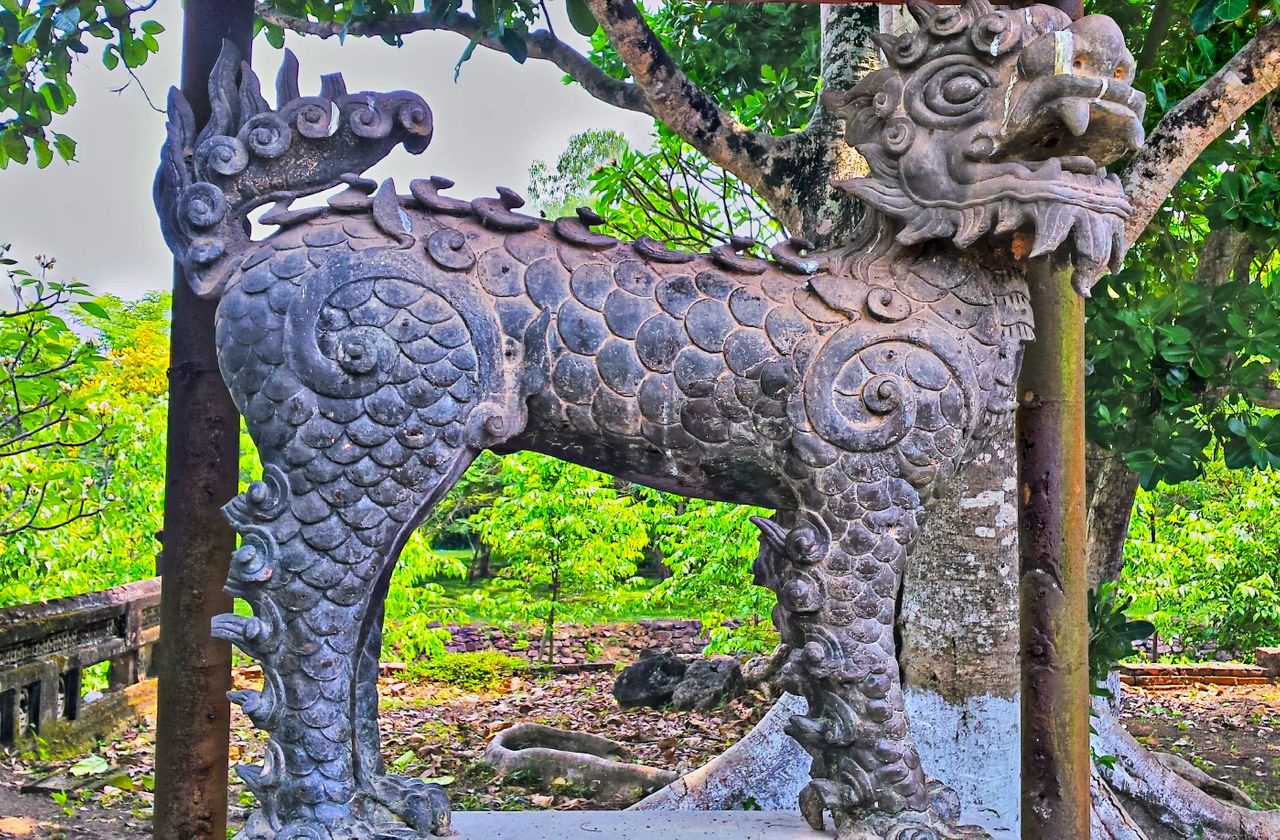 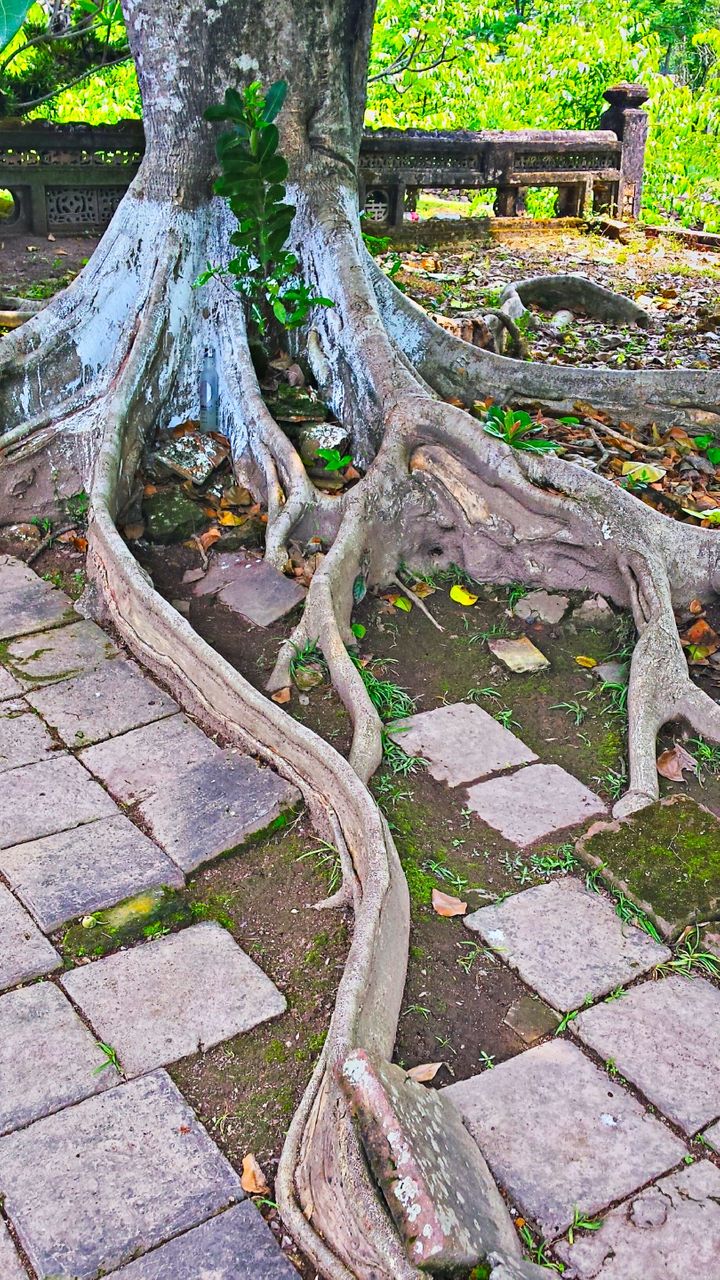 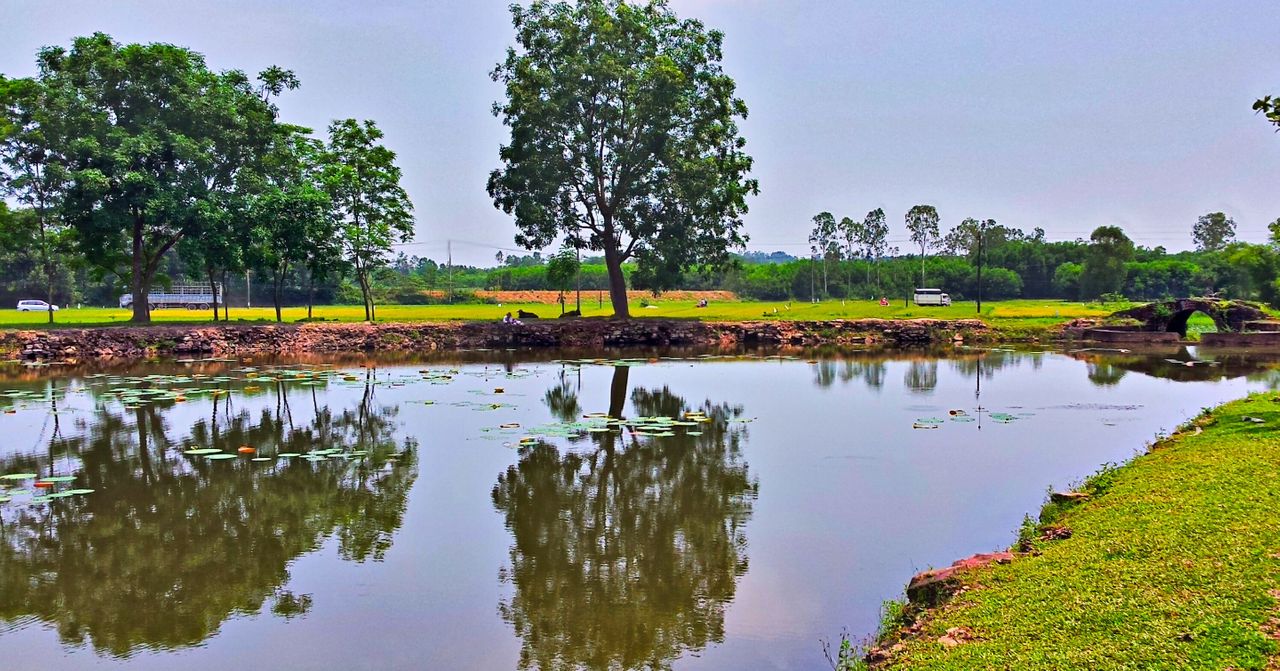 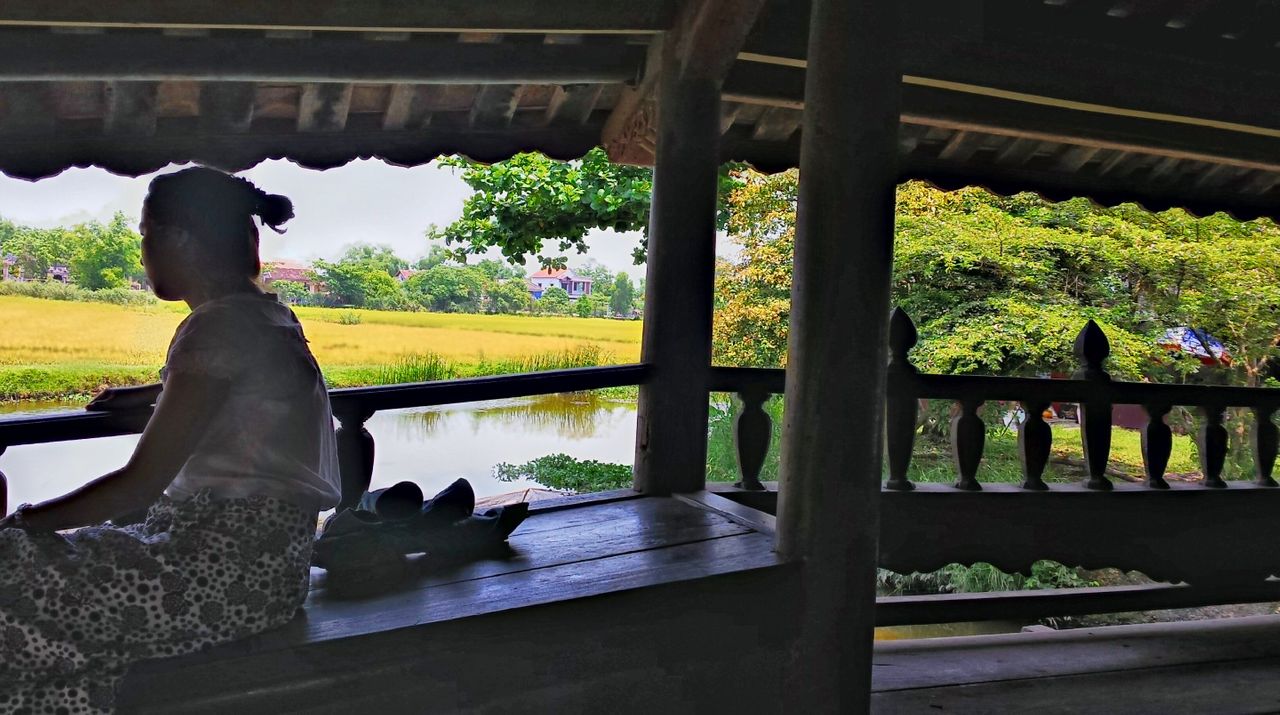 I explained that I didn't want to go to the busy places and my guide took me to a cool little covered bridge where locals go to have drinks and hang out. 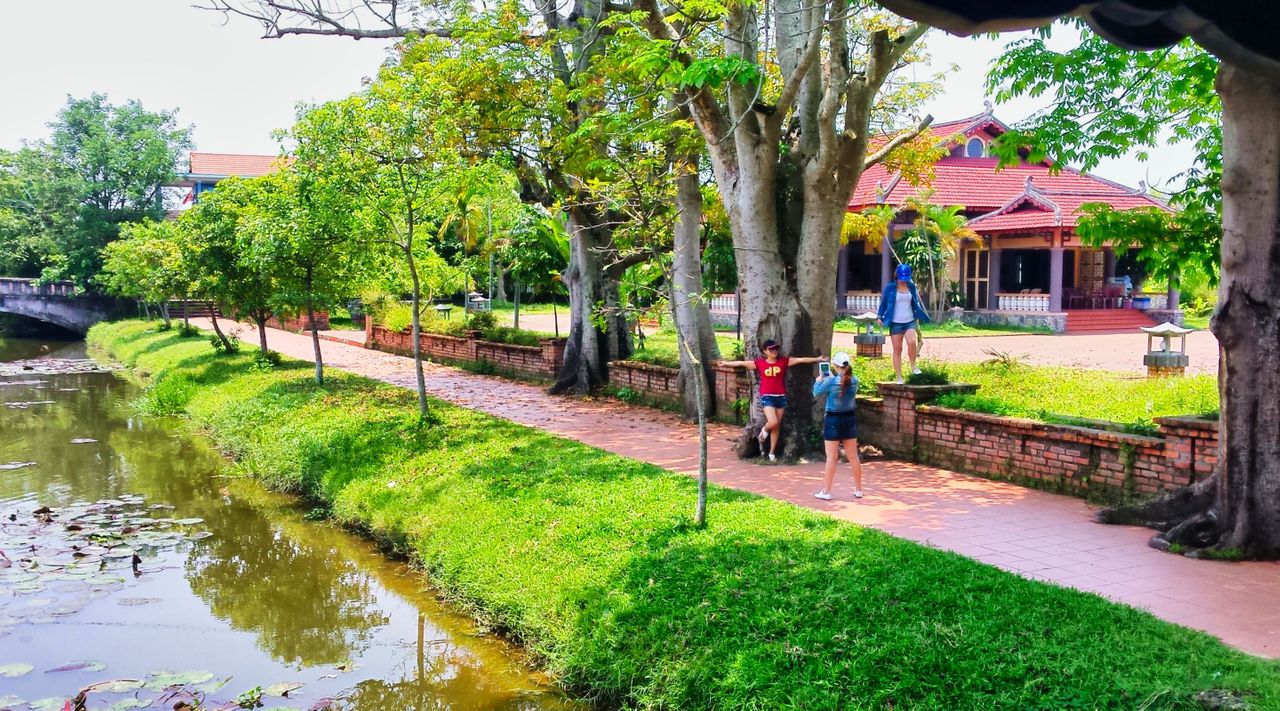 We also went to a little fishing village on the outskirts of the city.

The guide also took me to a family member's farm and it was cool to see inside the house out in the rice field. In the house's driveway they had a ton of chili peppers laying out, drying. I asked if they made hot sauce that I could buy, but they didn't have any made yet.

We also went to some cool cafes outside of town. The guide's sister ran a little shop that made fresh baby food. They had a regular menu on wall of things like fish and vegetables. But it was all ground up and made for babies. At first I thought it was kind of funny because we don't have baby restaurants in America. But the more I think about it, the more I think it could be a million dollar business out here.

The first couple of days hanging out with the guide were fun, but things turned a little sour. I needed an oil change and he tried to have his mechanic friend charge me 3 or 4 times the normal price for an oil change. I told him that I'd ridden across the country. I'd had the oil changed at least 20 times. I knew what the price was supposed to be. I paid the normal price and paid the guide for his tour service then told him I was going to be busy and I didn't want a tour on the next day.

I would have let him drag me around Hue for 2 more days and pay him for it. I was still super grateful that he helped me find a room, but I won't hang around people who are trying to rip me off.

That's most of what I did in Hue. One other thing that I did was almost kill an old man and made his family angry at me. I walked to the store by my hotel to get some beer. An old Vietnamese guy owned the store and we started talking. He was drunk and we started drinking together. I was vaping and he wanted to try it. I tried to warn him that it would hurt and you have to hit it differently from a cigarette. He took a huge rip off my vape and started coughing horribly. I thought he was going to have to go to the hospital. His family was pretty pissed, but maybe they were mad because he was drunk. Eventually he settled down and was good natured about the vape.

Other than that, I killed time until the holiday was over. Once it was, I headed towards Danang. I'm still not sure how to do the Danang post since I was there for months. I guess I'll just pick out my favorite photos and stories. I hope to see you in the next one!