today I will take you with me in another one of my trips through Europe. This time the subject will be a beautiful city in Belgium: Antwerp

I went to Antwerp some years ago, for a work conference while I was working as a Researcher at University. This was actually my first solo travel. I usually don't like traveling on my own, I prefer being in company of my friends, since I believe that sharing experiences is a fundamental part of our lives. There are a lot of psycological experiments that demonstrate how the same experience shared with other people is much more enjoyable than when you are alone.
During the Olympic Games when an athlete is awarded with the gold metal, if you take a look at his expression while she/he is approaching the podium, there isn't usually any transpiration of emotion, like nothing has happened. In the exact moment that they reach their position on the podium and they face themselves towards the public a big fat smile suddenly appears on their face. This happens because they are finally able to share their victory with everyone. All the fatigue, deprivation, sweat and spit blood start to make sense at the exact moment they are recognized by other people. The medal in itself becomes only the symbol of the acceptance of the others.

An other example that comes to my mind is when we watch the same funny YouTube video on our own and with someone else. The video is the same and the sensations it provokes in us are the same, but when we watch it with some one else it always seems much more funnier and enjoyable.
We are social individuals and we need to share our experiences with others, although in the last years this sharing part has switched form a live experience to a virtual one through socials.

So for me the idea of traveling alone was a little bit scary, since I thought that staying there for three days without knowing anyone would have been really boring. And in a certain way it was, but not as bad as I could imagine. I actually enjoyed walking on my own on the streets of the city, taking my time to take photos, resting when I was tired and talking to strangers when I felt it was the case.

And this last part was actually the best one of the trip, I had the chance to know some really interesting people during the trip. One in particular really impressed me for his story.
I was eating lunch in a local fast food, when this old man sat in front of me and started a weird conversation with me. He told me that he was a priest form Isreal, and that when he was 30 years old he decided to leave its home country and travel through Europe to predicate the word of God. Up to now nothing really strange, but then he added that he arrived from Israel to Sweden only by foot 😱. It took him something like 4-5 months and he said that this was one of the best experiences of his life. We talked for almost two hours and I had a lot of fun listening to his stories and telling him also some of my experiences.

This experience made me realize how each stranger that we encounter on the street may have a lot of interesting stories to share, and most of the time we are too focused on our lives to pay attention to others. Of course this is not the only reason why we don't approach random strangers on the road, it also not so socially accepted and we are probably afraid that if we started doing so, other people would start thinking that we are creeps. But I believe that for most of the people this is not the case, we likes to share our stories and experiences with others, even if they are strangers (at least for me it's like that).

After this very long psychological introduction 😂, probably it is the case to start sharing some of the photos I took of the city.

I went to Antwerp some years ago, so my recollections of the city are not so vivid in my mind. I actually had to check on internet in order to remember what were the buildings present in my photos. So the descriptions of each photo will be a little brief this time, but I hope that you will still enjoy it. The Museum aan de Stroom is a museum located along the Schelde River, in the Eilandje district of Antwerp, Belgium.
The MAS stands 60 meters high and was designed by Neutelings Riedijk Architects. The facade is made of Indian red sandstone and with curved glass panels. The main theme of the works and objects exhibited at MAS is the long history of Antwerp as an important international port.

Unfortunately I wasn't able to take photos of the museum so I will be only sharing the ones I took of the building. The first thing I saw about the city was the train station, and I was immediately impressed by it, because the style and architecture are quite unique. This is one of finest example of railway architecture in Belgium, and the British-American magazine Mashable even awarded Antwerpen-Centraal the first place for the most beautiful railway station in the world. 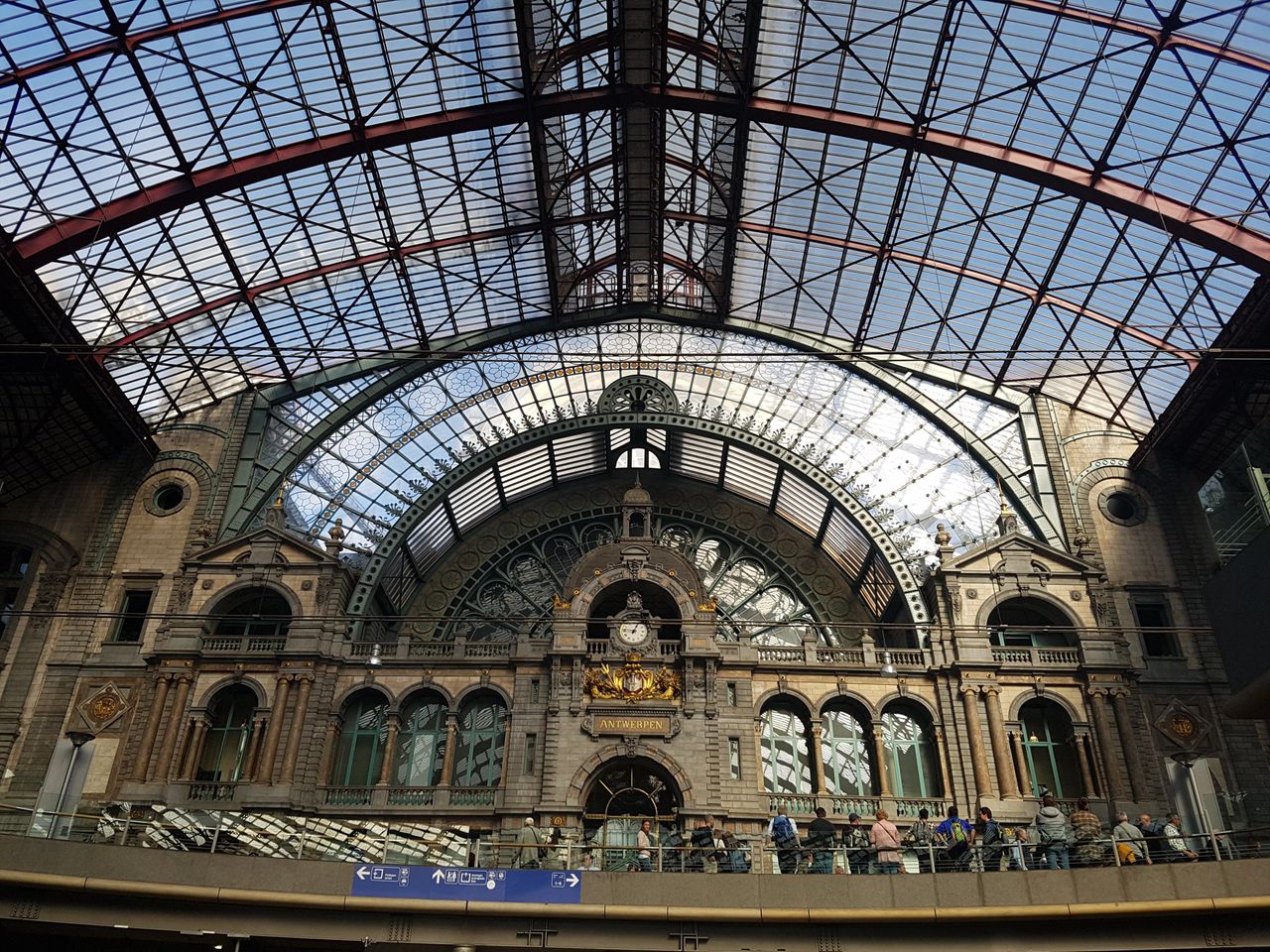 The church of St Charles Borromeo is a church in the center of Antwerp, located on Hendrik Conscience square.
During the night the building is completely illuminated (take a look at the front image of the post) and it is really amazing to watch.

I also entered inside to take look, and although I am not an expert of architecture or art, I have to admit that I really enjoyed the interiors. The Cathedral of Our Lady

The cathedral of Our Lady is the largest cathedral in Belgium and also has the highest tower in the country, one of the tallest in Europe which also earned it its inclusion in the UNESCO World Heritage List. Some photos of the city As I was saying at the beginning of the post, this was my first solo-trip and it really helped me discover a side of myself that I didn't know. Now I don't mind going alone and visiting new places, so this was a way for me to exit from my confort zone.
Apart from this, Antwerp is a nice city, not a memorable one actually, since there are other cities in Belgium which are more beautiful (like Bruges or Gent) but I actually enjoyed the three days I spent there.