Amazing Facts About The Earth And The Sun...!!! 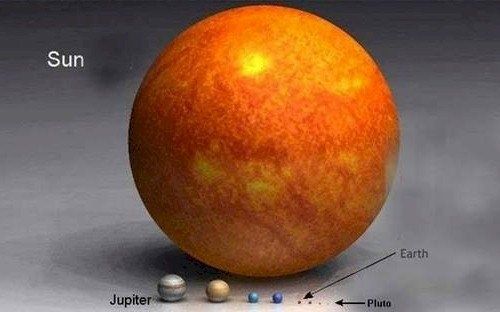 The earth is like a frog in front of the sun, just like a frog in front of a human, just like the sun is zero in front of the Beta Century star. The Beta Century star is far away from us. The power of 3.703 times ten is 15 km away.
That is 3703000000000000000000 km. Beta Century is also called "Ajina". The temperature of Beta Star is six times higher than that of the Sun, ie the temperature of the Sun is 6000 degrees Celsius while the temperature of Beta Century is 30,000 degrees Celsius. No matter how big the beta star will be. Beta Star is not the only one in the entire Universe, but in the millions. The amazing thing is that if the life of any star ends, then the black hole which is the grave of all those stars is eaten by attracting that star and does not even know if a black hole is a thousand. The son is still hungry even if he eats a star. Black is not an animal, but something strange and gravity has been created by Allah Almighty. The dead star keeps falling into it and does not allow even a piece of the star to go into space. Our earth is an armor. How big would be the one who made such a great universe of loneliness. How big would be the throne of Allah Almighty. In front of the Throne, this whole universe is less than a particle. If you say the glory of God in just two words, it is that despite such advanced technology and devices like Hubble Telescope with NASA, the seventh heaven is a distant thing. I haven't even seen the first sky. My Lord is so great. Is.!!