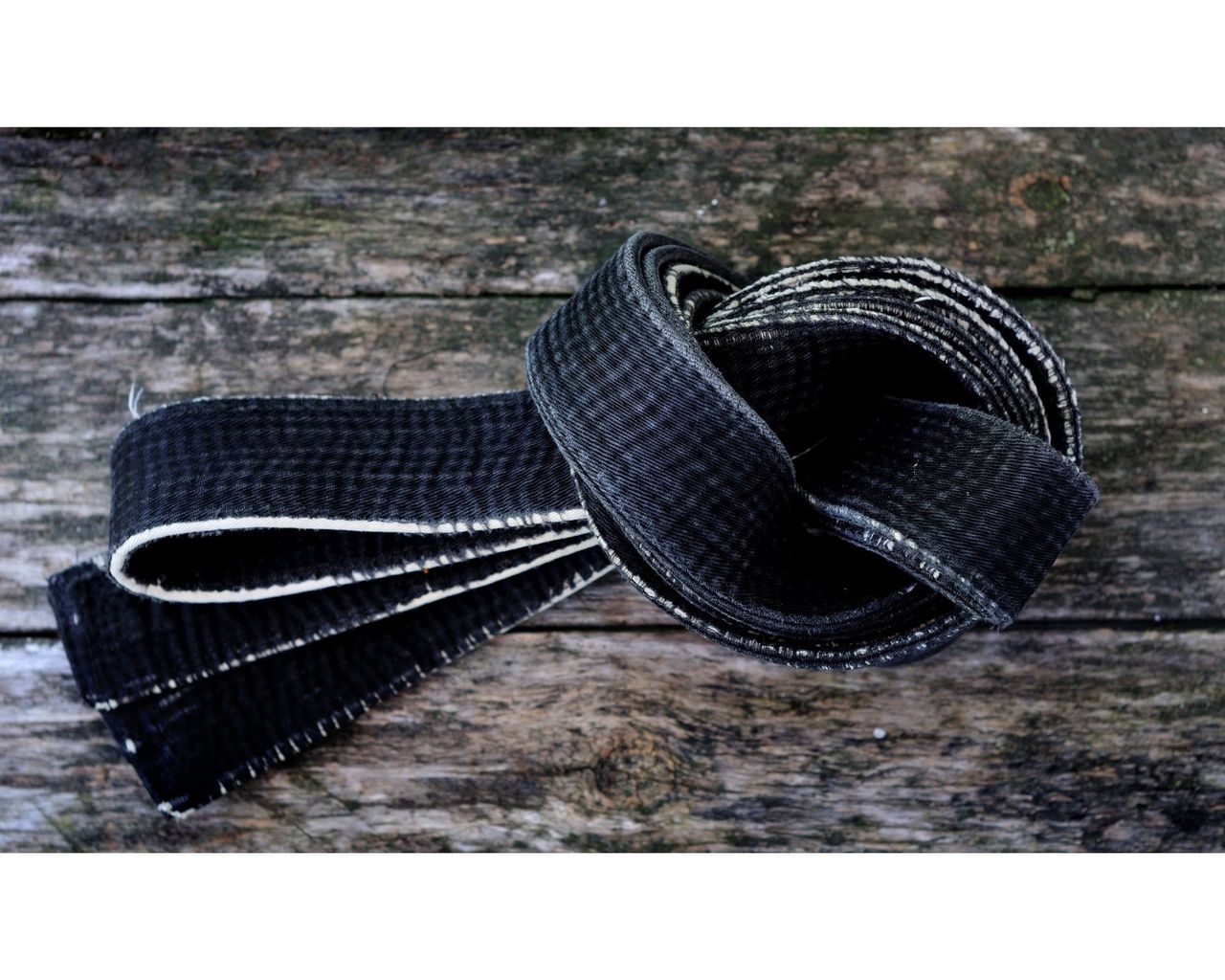 The old man opened his bag, pulled out a long white belt, and with both hands cupped together, offered it up to the youngster standing before him.

Honour it. Treasure it. Protect it. Do not let it out of your sight. It is a part of you now.

David turned the blinding white double-stitched belt over in his hands, contemplating the importance of the moment, its starched stiffness testament to the difficult journey that lay ahead. A journey filled with taut discipline, unpliable values, and requiring an unbending resolve to remain on course; with many layers to unravel. But the excitement he felt for the start of this new adventure was tinged with sadness; the knowledge that he was destined to train in solitude and without the frills, did not fill him with much joy.

Every day he walked by the flashy martial arts studios on Kings Road, replete with sprung floors, full-length mirrors, and stacked floor to ceiling with training equipment. The coloured hues from the rows of belts staring down at him from the dojo floor inside left him sullen. It was not that he did not like them; on the contrary, he coveted them. The other guys in the dojo all had coloured belts. Belts that showed that they were worthy, improving; notches of experience.

He had been at the beginning of his journey, and there would be plenty of time for belts, or so he had thought. His mother, however, had not been able to afford to send him to any fancy lessons, and so for the past few years, he had accepted the invitation to train with the old guy in the local park who pitched up every day at the exact same time without fail, removed his shoes, and performed a beautiful series of slick routines and manoeuvers; the lyrical dance that had entranced him on so many occasions whilst he had sat lonely, on the park bench, waiting for nobody and nothing in particular.

He shook himself from his reverie; he just could not understand why his sensei did not feel the need to grade him; the element of recognition once again being denied.

Over the years he had watched as his friends progressed from white belt through yellow, orange, green, some even hitting their blue belt before their first year was up, and then they moved onwards and upwards through purple, red, brown... and still, he sat with the same white belt, now grubby with wear, that his sensei had handed to him at his very first lesson. It had seen early morning rumbles in the dew-laden grass, the dusty trails through the bush when their kumite had attuned with nature, the salty grains of cool wet beach sand in the evening twilight at the end of a day of endurance training, and many many days in the park spent perfecting their craft, fighting each other, learning about each other.

Today was no different. He still wanted to be seen. To be recognised; understood. He could feel the wet dew of the morning grass between his toes. It was still early; cold. The sun was just peeking over the horizon. He looked up and around him, he was still the only one in the class if he could even call it that.

Three years had passed and he still sported that same original white belt. He had questioned his sensei on the merits of denial and whether he would ever be permitted the opportunity to attend a grading that would allow him to earn his black belt, the pinnacle of any karateka's journey through the martial arts. His sensei had maintained that gradings were not necessary, that too much importance was placed on the eventual attainment of one's black belt and that the journey was far more important. The end goal should not be to prepare for a black belt exam. One should remain focused in the moment. Follow the Dōjō kun of Karate:

and most of all, enjoy the process. When the time was right, the effort would be rewarded; they would both know. There was no need to set any timeframe for achievement.

He was not convinced. The other karate schools all had flashy belt designs and grades and he felt insignificant next to them.
Another year passed and a major regional Karate tournament was taking place in his hometown. David begged his sensei to allow him to compete against the established dojos in the area. His sensei tried to get him to remain attentive to his own progress, to continue to look within and seek perfection and growth there; not to compare himself with others, but he felt compelled to prove his worth.

He shifted uneasily as he waited in line to register for the tournament. The queues were long and abuzz with expectation, excitement, anticipation. His friends all proudly sported belts spanning the colours of the rainbow. He dared not look down at his own.

As he stepped forward to complete his application form, his heart sank. A line of tables greeted him and each one was labeled by the belt of attainment held to ensure fair competition. With his head held low, he shuffled through against the direction of the crowd towards the little table at the far end of the line.

After all these years, it was a kick in the teeth.

Excuse me, can I help you?

The cheerful voice rounded from his left shoulder as its owner took his place behind the table, pen in hand, attentive.

Um...yes...I... actually I'm looking to sign up for the tournament.

Ah, yes, of course. I saw you training earlier in the practice arena.

The man grinned back at him.

You're pretty good! But I can't help you here.

It was always going to be this way...he resolved. His heart heavy, he turned to leave, the low utterances leaving his lips, barely audible...

Am I never going to fit in anywhere?

Sir! Wait, please!...maybe you misunderstand me? I didn't mean you couldn't compete, just that I couldn't sign you up, here. You see this table is for white belt entries only.

He paused, his hands moving to his belt, feeling the old worn cotton between his fingers. They tightened their grip.

You're hilarious, you know that,

The guy was now leaning back in his chair, pointing directly at his belt.

... your belt tells a different story!

He stared back at the bloke who was now brandishing a white belt in his hands and chuckling.

Look, see...now this is a white belt...that (pointing again at the one wrapped around David's waist)... is not!

He turned to see his sensei standing behind him.

I knew I would find you here.

He could barely face the old man. Downcast, he felt robbed of opportunity; robbed of the honour of ever being able to wear a black belt.

Sensei, if I cannot even do white belt properly, how will I ever achieve black?

David, the mark of a black belt is not one who has attended many fancy gradings, been awarded belts in recognition of advancement. You do not need these accolades, for your belt is recognition itself. It tells its own story. It is never silent. It is a living testimony to the hard work, the effort that you have put in, and the experience that you have gained. Your belt takes on the hue of its years and this is the traditional way... as masters of the craft we do not wash our belts... the more experience we go through as karateka, the more our belts reflect that growth, ever-darkening with the years until it becomes so dark that it becomes the true reflection of your own experience and ability in the arts.

The young man at the table interjected;

Yes, uh... erm... this is exactly what I have been trying to tell him, he is simply at the wrong table.

With that, David looked down at the belt wrapped around his midriff, and then back again at the belt in the young man's hands. In that moment of cognition, he realised that his belt no longer bore any resemblance to the shiny virgin white belt of yesteryear. That image may still have been starched in his memory, but the belt whose ends he now tugged tightly in his hands was a soft, well-worn version of the original, a dark charcoal grey of the engrained blood, sweat, grit, and tears it had encountered and endured. He had been ashamed at times to wear it. But at that moment he realised that it was also a belt countenanced by years of hard work and experience. A belt that never separated itself from its master. And his mood shifted.

You don't need a new belt David. You just need to believe in yourself. You are a black belt. Osu.

This short story was inspired by Freewriters 5 minute freewrite prompt: black belt and by The Inkwell prompt #50: shoes, mood, adventure