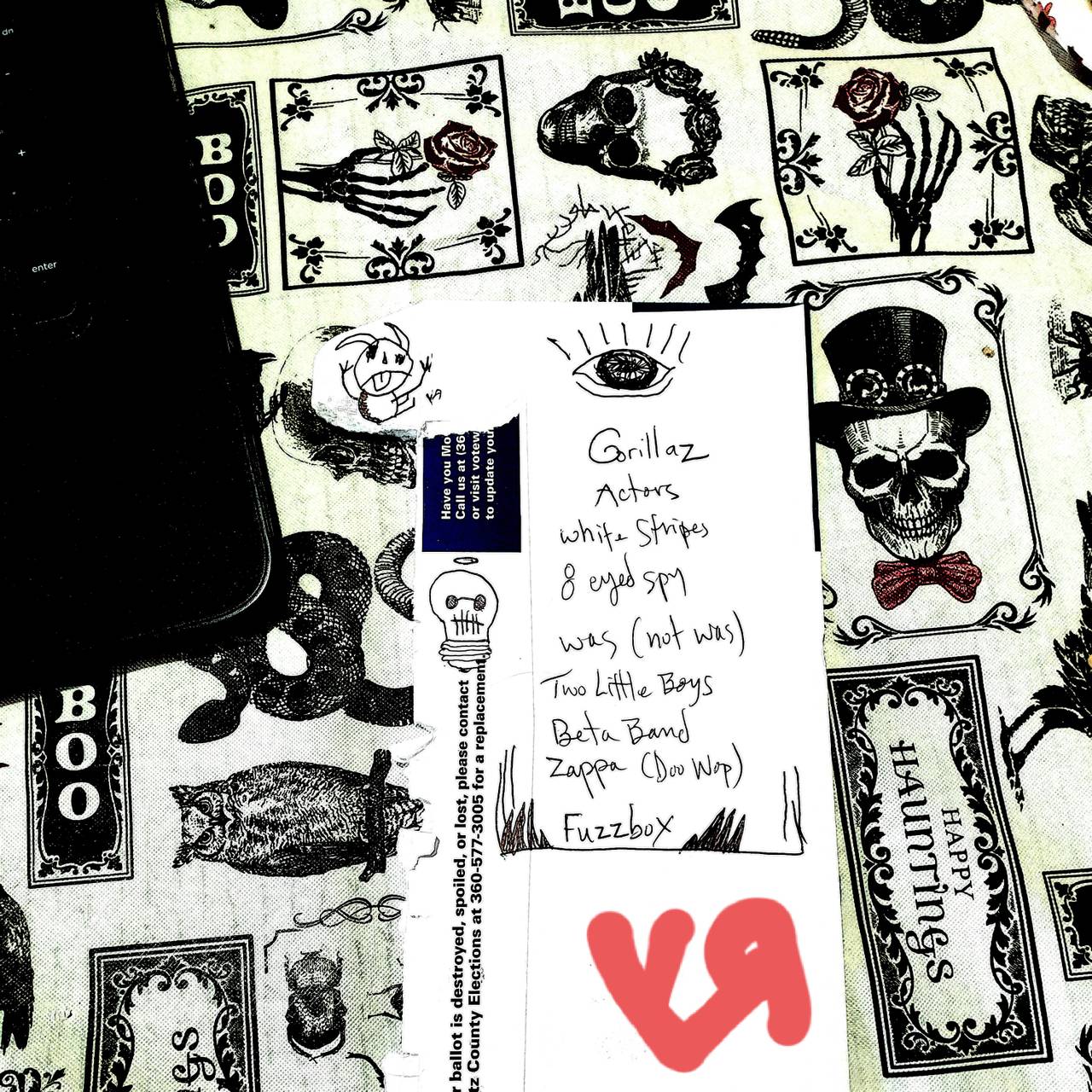 [My photograph of my kitchen table's tablecloth, plus my shopping list for tunes (from the digital realm) and some WORK IN PROGRESS doodles. I draw really small, then I blow stuff up to help preserve the flaws and impurities in the work. Anyone who sands off the rough edges to make their work look "smoother," is missing the point, IMO...]

The world is fucked up right now. Maybe it's always been fucked up. I don't know. (I don't have adequate verifiable sources for prehistory...) So...what do we do?

For the last few days, I've been trying NOT to look at election junk because I'm a neurotic and it's freaking me out. I'm already on too much medication (prescribed and self-inflicted), so I can really go much further down that path. Therefore, (if we Add N to (x)...), the best thing for me is dipping my entire head in a bucket of art: music, drawing, writing, coloring, photography, comics... ANYTHING that I can grasp or do to keep my mind occupied.

There have been some odd results...

For one thing, I've been selling a TON of art lately, and (as you can tell from my doodles above) I'm not creating particularly COMMERCIAL art! The DADA practitioners, particularly of the Swiss and German varieties, swam in similar streams during World War I as I'm skinny-dipping in now---times of great stress, of doom, of societal collapse---and in these environs, dabbling in the irrational and chaotic is the APPROPRIATE tone. That's where I live...

Still, it's surprising when OTHER FOLKS find something in my works that inspires them to drop CASH... I've sold something like 15 or 20 pieces at MakersPlace in the last couple of months (used my earning to buy postcards from other artists AND music!!!), quite a few thru Rarible, and even a half-dozen or so from NFT Showroom... I like NFT Showroom the BEST---by far---but the buyers at the other places PAY MORE... I'm not a heavy bread-head, though, so I'm okay with the compromise. The HIVE-based platform is simple, the price is SET (no fucking outrageous GAS FEES---I paid six bucks in gas fees last night to sell a ten dollar item!), and the community is HILARIOUS, SUPPORTIVE, and ENGAGED. If you haven't check out the Showroom yet, DO IT NOW!!! If you already have a HIVE account, you have a WALLET ready to go at NFT Showroom!!!

As I mentioned above, I make art to keep the DEMONS at bay. It's therapeutic, but it's also GENERATIVE. It might not seem like it based on my drawing or writing style (which are both SILLY,) but there is a deeper philosophy behind my noodling. I'm CREATING STUFF for a reason: I want to show everyone that they can make art; I want to show everyone that their art can find an audience, even if it looks rough or unprofessional; and I want to leave a BUNCH of evidence behind that can help support the following thesis: "Richard F. Yates was here and he did some stuff." How many people do you know who, after the konked out, just slipped away. They're remembered by their friends and loved ones, but what happens when THOSE folks also drift off to infinity? (Have you seen Coco?)

I'm trying to make it MORE difficult for THE NOTHING to GET ME. It's not a forever game---that's down to the Big Crunch or the Big Sizzle or the Big Bland...three ways the universe could end...but I'm making it TOUGHER for the folks who are still around after I zip off to Neverland to get away from my ghostly presence. I'm HAUNTING this world with my creative works, (and through teaching my kids and grandkids how to look at the world---head slightly tilted sideways, tongue out, eyes crossed, middle finger raised!)

Meanwhile, here's a project that I started a week or two ago. It's a VIRTUAL PAPER GALLERY in NFT FORM... (Weird? It almost makes sense to me... Almost...)

"Nothing To See Here 001" by RFY (HF)
Collection: Trash for Life (In the Haunted Honeycomb)
Total Edition(s): 13 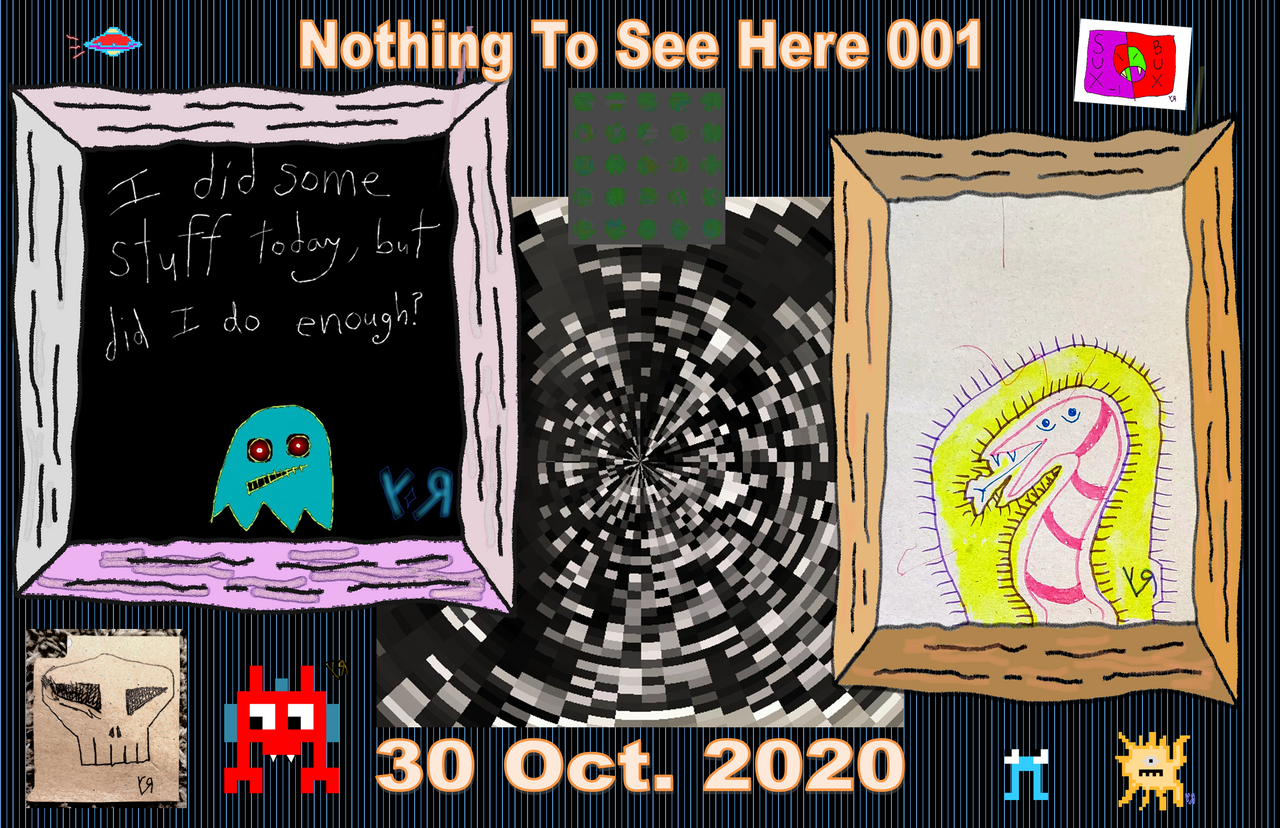 This is a collage. I've been trying to make a VIRTUAL gallery in Minecraft, and so far I've integrated ONE picture from "real life" into the game. And I've been working for weeks. And the image is fuzzy and pixelated. (I would not call it a massive success...) But then I thought, "Why can't I use my ancient computer to SIMULATE a gallery-space in a LITERARY sense?" So this is a "PAGE" of my new couldbepaper-gallery-installation! Printed out, it would be 17 inches by 11 inches (and I would use a nice matte finished paper and at LEAST a 30lb. cardstock... Might cost a bit more, but it will look REALLY nice! (Weird...but... Well, I like it...))

"Nothing To See Here 002" by RFY (HF)
Collection: Trash for Life (In the Haunted Honeycomb)
Total Edition(s): 13 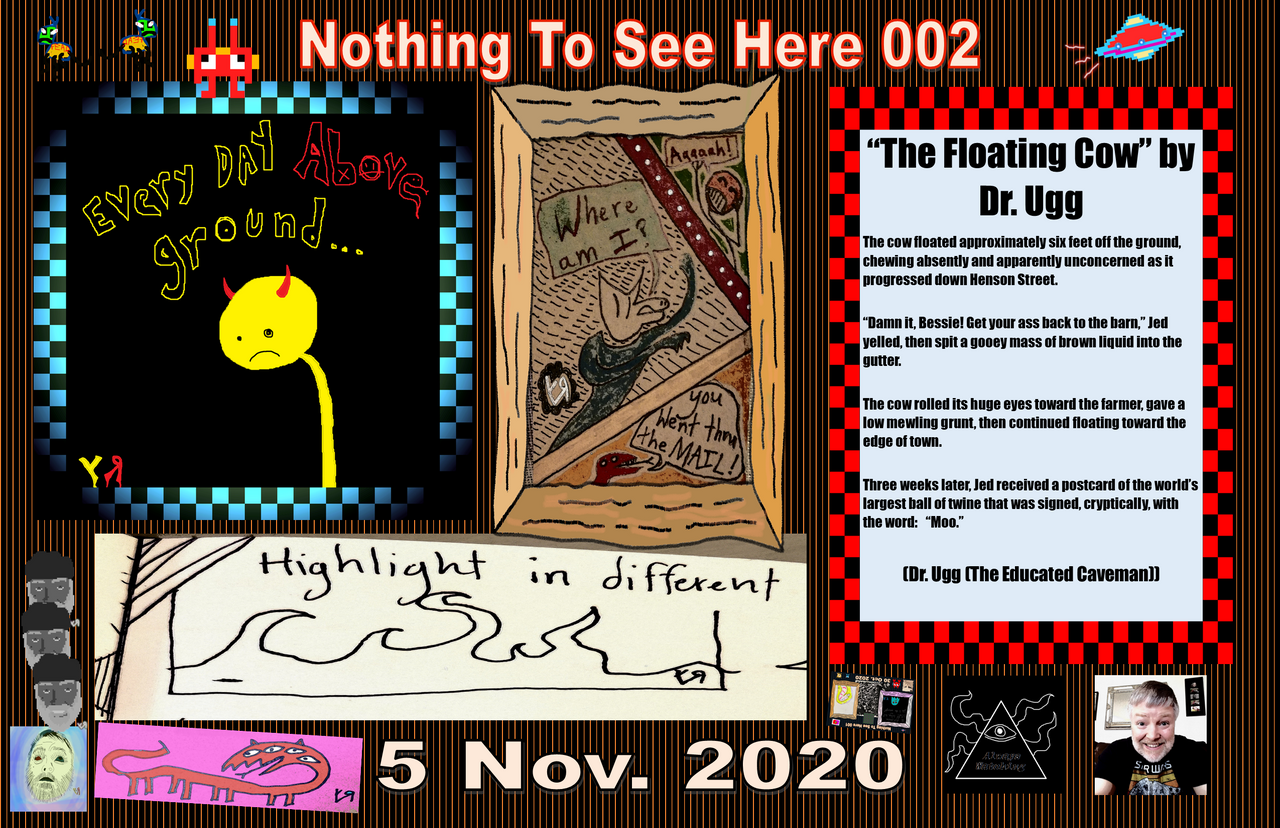 [Mixed media on digital canvas. Lots of pixels and even more brain cells were harmed in the creation of this piece!]

Here's page TWO of my new couldbepaper-gallery-installation! Printed out, it should be 17 inches by 11 inches, either bound on the left with a sewn or glued binding or just left loose...or framed, if you're one of THOSE TYPES... TECHNICALLY, you could probably get away with printing this on 11 x 8.5 inch paper, but you'd really only be robbing yourself of the TRUE experience. Don't be like that! This page includes a very, very, very short story that I wrote in 2012 under the pen name, Dr. Ugg the Educated Caveman. I've republished this piece several times on various blogs (and I still think it's funny), but this is my first time TOKENIZING this work! (A historic moment!!!) Enjoy...if you DARE!!!

I make a LOT of stuff. Weird stuff. Stuff that even I look at and say, "What the FUCK is that supposed to be!?" (Those are usually my favorites.) This is a thing that I made. Page two was created today! I don't know if anyone will buy them (even though each NFT is less than two bucks!) but that doesn't matter to me as much as the MAKING! It's created. DONE! Shared. There is PROOF that I was here today, that I GENERATED something from sort-of-nothing. These pixels would have been here on this screen regardless, but the IMAGES---which require intelligent interpretation, especially the WORDS---would not exist if I hadn't made them.

It's a neat way to look at stuff, if you ask me. (And you didn't---or, if you did, I didn't hear you because I have ear-buds in, and I'm listening to some tunes as I type this!)

Okay. I've rambled and brambled my way through more words than most folks will probably read, but that's what I do. I ain't gonna STOP doing it just because people MIGHT NOT read all the way. Ha! That would be weird!

By the way, this was post... SEVEN? I think it was seven in my #HiveBloPoMo challenge for November. Shooting for 30 posts before December 1st. Doing okay, so far!!! Keep my nose to the keyboard! Carry on...

SUPPORT INDEPENDENT FOLKS WHO ARE JUST MAKING STUFF BECAUSE THEY LOVE IT!!!