You may have missed the previous parts 1 2 3

The Violin Gate is located at the entrance to the heart of the city, it is a superb double arch decorated with a gigantic cello carved in the rock, which seems to have melted under the effect of natural erosion. This monumental portico, which looks like an ancient civilisation, is also flanked by huge scores engraved on the interior columns and on the steles of the building. In front of the gate, unrolled banners fluttering in the wind publish the latest events organised in the city. You will enter the city through the left arch of the cello, while on the right you will come face to face with the entrance to the Cosmic Scores Library. If we have already mentioned the many parks and their enchantment, the urban interior of Broozel has just as many other surprising sights. As you stroll through the various districts, you will be able to admire the abundant architecture that the symbiosis between music and nature has created here in a unique way of life. Amongst these wonders, you will come across these strange plant harps which, like creeping ivy, intertwine with the façades of the buildings to create immense urban vegetal structures. When the young, flexible branches of these trees vibrate like a powerful rubber band, they produce the subtly sweet notes of a harp. If you go for a morning walk, you may see residents playing arpeggios by grabbing a few branches and vibrating them together to create chords and melodies as they walk. Musician shops - a jumble worthy of an oriental souk

If the shop windows are teeming with hundreds of oddly shaped objects in a jumble worthy of an oriental souk, it's because he is a musician and junk dealer, having collected all the instruments and scores for which he has a boundless passion. Do not hesitate to initiate a conversation with these artists, they are all delighted to share their knowledge and discoveries with you. 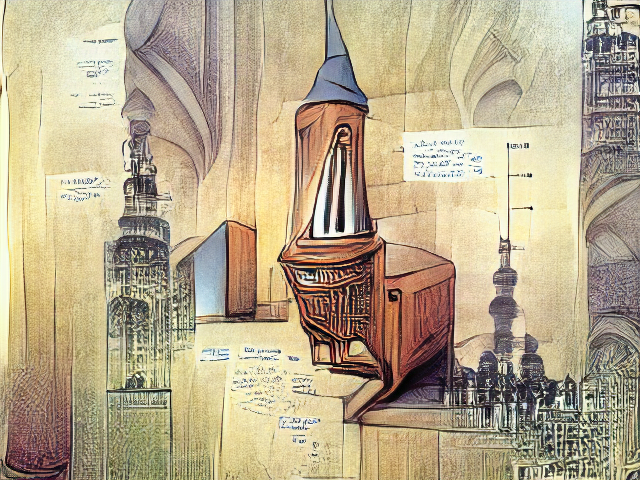 At the corner of Drum and Bass Street you will be in front of the first Bass Minaret of the town. It's the oldest one in the world, still built in wood but still vibrating at the hours of the percusisons prayer. Under the hood of the minaret stands an enormous resonating wooden bassbox. When the percussion monk begins its beating , 15min of improvisation of prayers calling, the box responds immediately with its wooden sound. This archaic vibration wave makes it possible to produce easily in open air a trumpet of sound in very low frequencies. This event occurs everywhere in the city and looks like a call to prayer, excepted the fact that in this case the call is dedicated to the global universal rythmic energy of the world. While there are many minarets, other districts have bell towers with what is called here, doppler bells, consist of two kind of steel trumpet designed like elephants ears hanging at cathedral top. As a Doppler Bells moves away from hearing , the heard pitch ascends , and as bell moves closer to hearing , the heard pitch descend. When moved one inch away from your ear , the bell will sound E-flat sharp . And at the real high end, when the bells are about two inches away from your ear , it will sound B-flat sharp . The higher you position , the sharper the tone. So in fact, when they play, what you hear depends on your location, and nobody ears the same note. And if you move while the bells are playing, it can give you the impression that it plays exactly the same note all along. Some people like to run around the doppler bells when they play, so don't be surpised when you see people running in circles around a little tower, just look to the top of the building, it should have doppler bells.

Sunset at Beach of Sounds Beach of Sounds - the concert that floods the entire city bay

Finally, when the sun sets, the majority of the population will invite you to accompany them to the beach of sounds. Every evening, to the west of the city, there is a beach with a monumental opera house above it. The people of Broozel are accustomed to going there in their hundreds to enjoy the concert that floods the entire bay. The sunset gives the atmosphere specific wavelengths which, like the aurora borealis, make the music played in multiple cloudy volutes of sound stratus.

After such a walkind day, you may wish to relax and study furthermore this universal harmony civilization by going to the Library.

An original creation series made with support of generative VQGAN+CLIP and tranfsormers model languages (GPT-J & GPT-Jumbo ) technologies, driven by my own dreams

You may have missed the previous parts 1 2 3