yesterday the last round of the Hivechess Tournament season 5, "Spring" was played. 12 players were brave enough to go for the 2 hours 10+0 Rapid chess marathon, and most of them actually played until the end. 3 more players had shown up but didn´t play a game. Due to the time mode the overall berserk rate was quite high (45%). The average rating seemed low, but many players are not used to Rapid games and so this number is not adequate and in fact it was a strong field. No surprises in the top ranks, @sawko (sawkito) won with quite a margin to the second, @jaki01. The next was a surprise, as it was a completely new participant. @ulisesjhm1510 got the third rank in his first Hiveches tournament. Congratulations to all 3 players! 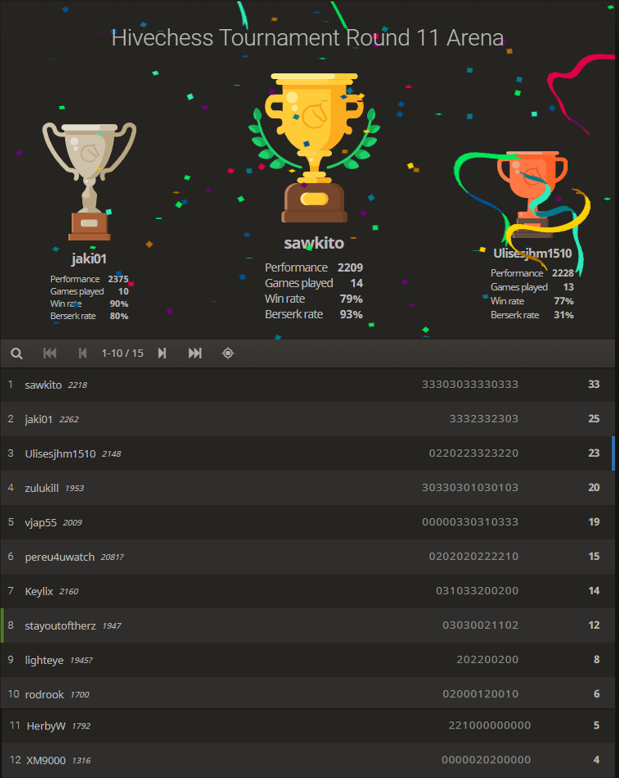 The Top 3 players were the same as in the last season.
As expected, @sawko is again the deserved winner, although this season he was not able to win all rounds. After him @jaki01 gained the second rank, followed by @yazp (zulukill) who again had a very good season. The gap between the three and to the remaining field is quite considerable.

Congratulation to all players! Season stats:
The average tournament rating of this season 5 was 1844, the highest so far! Also the participation with an average of 13,9 players per round was a new record (but can of course still be better).
In total 26 players participated - more than in any other season! They took part on average in 5,9 rounds (and 8 players joined all 11 rounds). On average the players gained 2,6 points per round, but quite unequally distributed! While the Top 3 players gained on average 6,5 points in each round, all the others could make on average less than 1,7 with 7 players even ending with 0 points. This shows how tough it was to land in the Top 8 ranks. As of next season the Top 10 players will get points.
9 of the 26 players had participated less then 3 times and will therefore not be considered for the prices!
Overall it looks like the Hivechess tournaments slowly increases in attraction, especially for relatively good players, but there is still big room for growth, especially for lesser experienced players!

Here are all results of the 11 rounds of season 5:

As always, I will do the exact calculation of the prices after the payout of this post, but so far it looks as if the total price pool will be more than 400 Hive (and Hive is worth more then previously)!

In the next weeks there will be a break and somewhere in May the next season will start. Watch out for the announcement post!

See you soon in Season 6!