yesterday the last 2 rounds of the Hivechess Tournament season 3 were played, first a 3+0 round, followed by a blitz Swiss Tournament.

In the 3+0 arena round we were 10 players (@pereu4ivatel (drakOnb) seemed to have connection problems and couldn´t play a game). @sawko (sawkito) was unstoppable and won with a incredible gap of 26 points to the second, myself. He won all his games except just once I could draw against him (due to a fatal premove😁). Third was @yazp (zulukill) and behind him @maciejficek (XM9000) as 4th and, very close, @schamangerbert (HerbyW) with a 5th place and his best result in this season. The remaining tournament points went to @vjap55, @zacherybinx (sirtetris) and @rodrook. 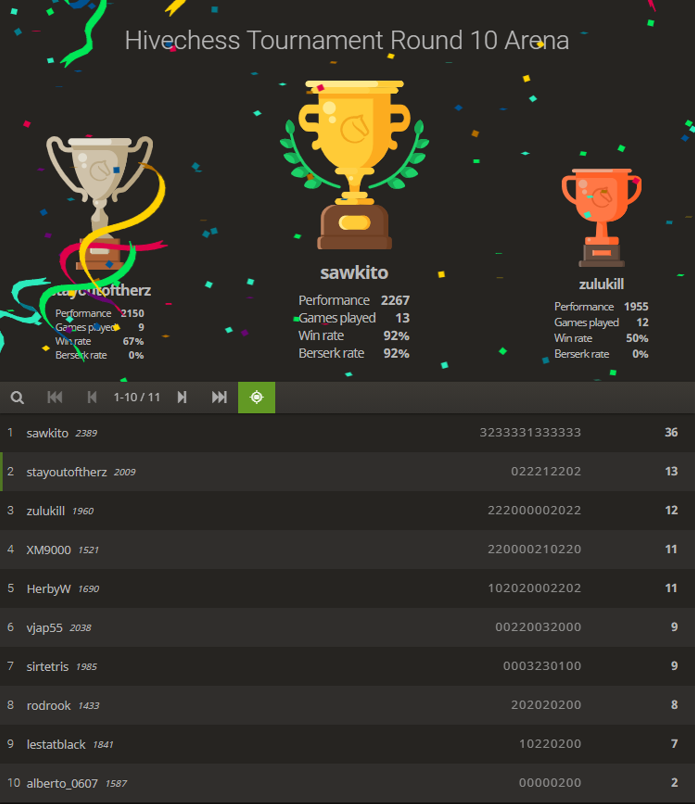 Directly afterwards the final round was played as a 5+0 Swiss tournament with 7 rounds. We were 9 players (10, but this time @franciscomarval (lestatblack) didn´t make a move). It was the round with the highest average rating of this season, 1877! Again noboby could challange @sawko (sawkito) who won undefeated. Only the second, @zacherybinx (sirtetris) could achieve a draw against him. Third was again @yazp (zulukill) and I got the 4th rank, followed by @vjap55. Sixth was @alberto0607 with his best result so far! @rodrook could get 2 points and the 8th rank went to @pereu4ivatel (drakOnb) who only could play two games. The problem with Swiss tournaments in small groups is that - since a rematching of the same opponents is forbidden - weaker players have to play against all the top players. A pity that not more players have attended. 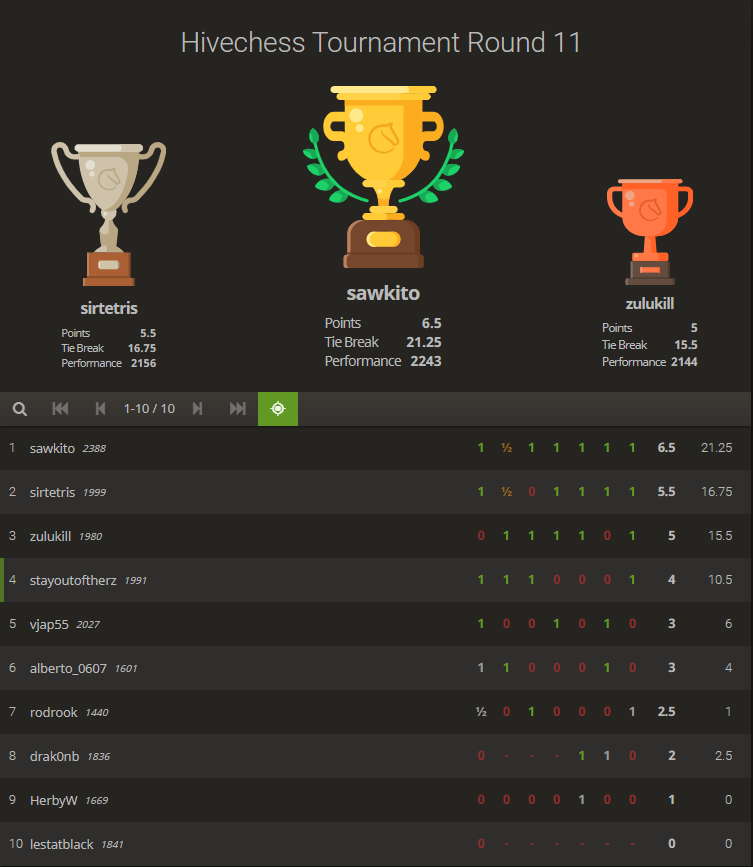 The games of this round can be found here.

Congratulations to the double winner @sawko (sawkito). He could repeat what @jaki01 could accomplish in the first season. By the way, @jaki01 was missing today and had previously - as a sad surprise for all of us - announced to do a break from Hive. I hope he will participate nevertheless in future Hivechess tournaments. 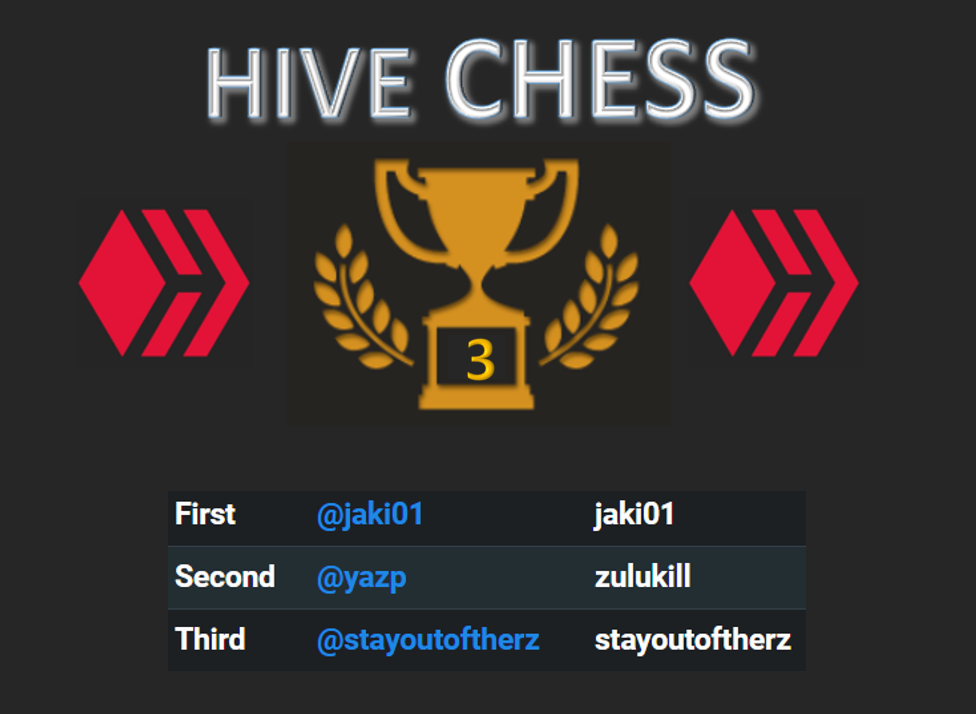 From m8loss, and jonbellionfan I don´t have a Hive name and thus they were not counted, @parung76 and @catto000 were also taken out, as they didn´t play a single game

@jaki01 is again the expected winner of this season with 67 points! Congratulations! @yazp (zulukill) who played very strong as well, took the deserved second rank and I got this time the third rank only. Some strong players like @sawko, @eniolw and @zacherybinx were ranked lower due to having played much less rounds, so in future it could look very different if they would play more often.
Due to the double win today, @sawko jumped to the 6th rank, also his brother, @vjap55 could gain some places. Otherwise no surprises and big changes in the ranks. Funnily, this time it was very close between the 15th and the 16th, @schamangerbert and @alberto0607. Both are same in points and participations, so the average tournament performance had to decide: 1643,0 for @schamangarbert and 1642,86 for @alberto0607! Can it get any closer?

Some season stats:
The average tournament rating of season 3 was 1821, considerably higher than in the previous seasons (1791, 1760). On average we had this time 11,3 players participating per round, slightly lower than the 11,6 from last time. Not sure what to do to attract more players. Suggestions are welcome.
This time 23 players played at least one game (one more than last time) who on average participated in 5,4 rounds and gained on average 2,9 points. Top scorer per round was @sawko with 8 points(!), followed by @jaki01 with 7,4 and @yazp (zulukill) with 5,6.

Here are all results of the 11 rounds of season 2:

Regarding the price payouts, I will do the exact calculation after the payout of this post, but so far it looks as if the total price pool is around 600 Hive!

Next week will be a small break and in 2 weeks, on the 27th Nov., a kind of Christmas season will start. Block already your calendars to not miss it!

See you soon in season 4, stay safe and as always: keep practicing!