yesterday was the final showdown of the Hivechess Tournament season 2. It was again a double round, one bullet and one blitz.

In the bullet round we were 12 players, as a surprise late joiner we could welcome @eniolw for the first time this season. @jaki01 showed today that also in bullet chess he is a class on his own and won all games exept one - Congrats! Second was @yazp (zulukill) who played again very solid today like in the last rounds (4th time in a row in the Top 3) and on the third spot was @foxconnmars, followed by myself.
The remaining tournament points went to @pereu4ivatel (drakOnb), @schamangerbert (HerbyW), @sammy00 (migmag) and @rafaelaquino (ajedrezclub2t). 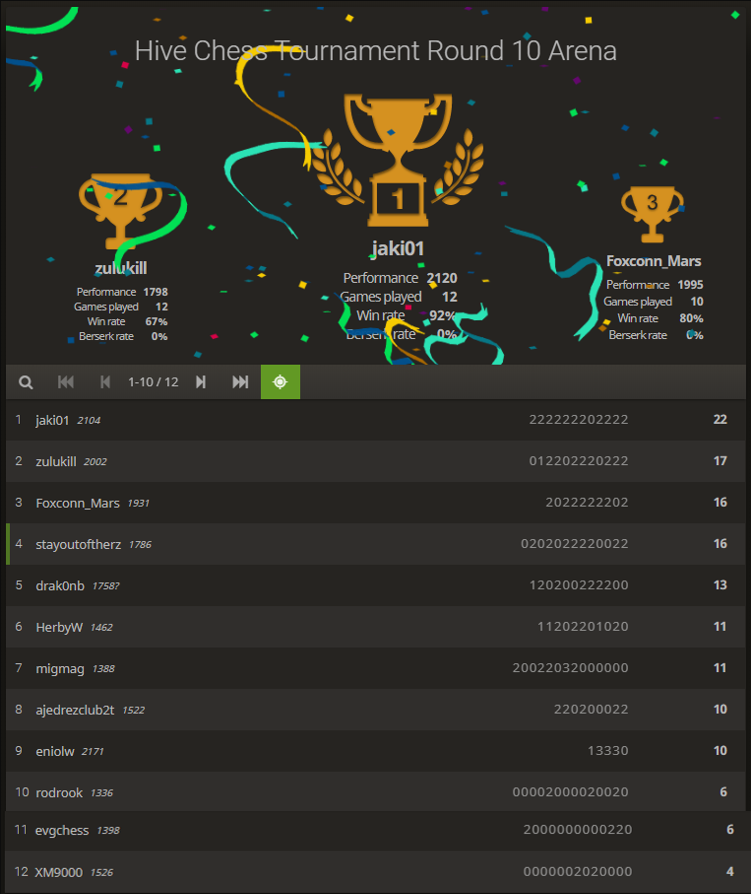 Directly afterwards the final round was played as a 5+0 in Swiss tournament mode with 7 rounds. @eniolw was unstoppable and could win with 2 points advance and a full score of 7 points! Congratulations! Well deserved 2nd was @foxconnmars and third was @pereu4ivatel (drakOnb). Like in the round before I got the fourth rank, closely followed by @yazp (zulukill). The remaining tournament points went to @rafaelaquino (ajedrezclub2t), @evgsk (evgchess) and @schamangerbert (HerbyW). 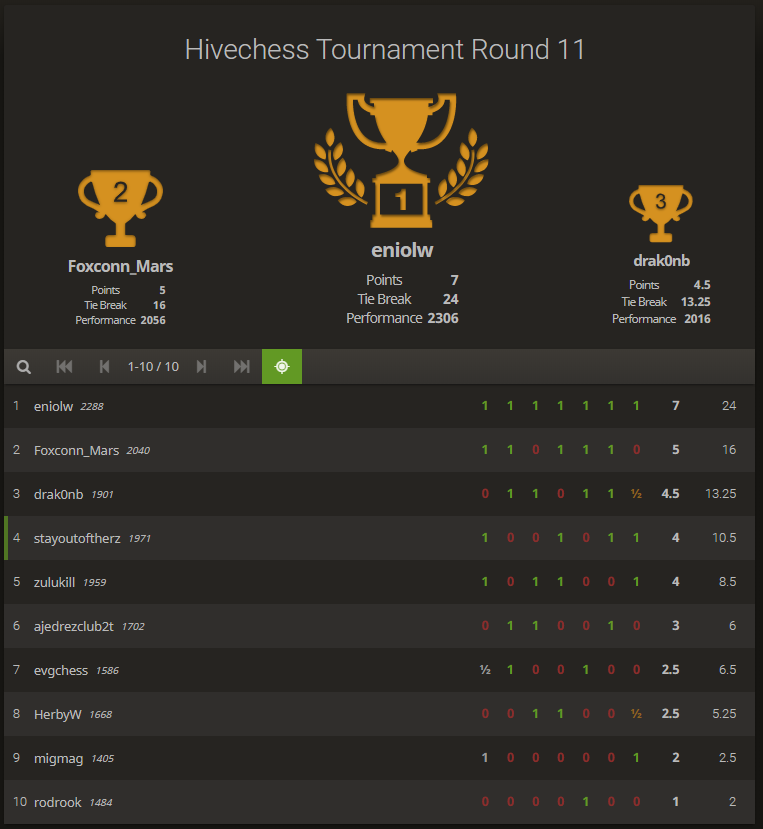 The games of this round can be found here. 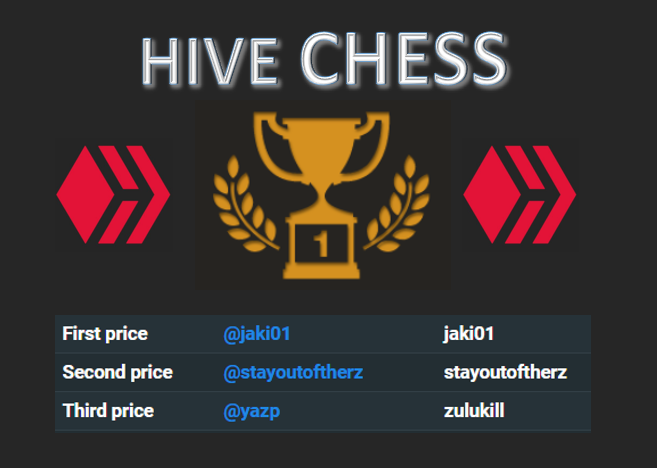 The average tournament rating of this season 2 was 1760 (slightly lower than the 1791 from last time). While in the last season on average 8,7 players were participating per rounds, it was this season considerably higher with 11,6 (ranging from 9 to 14), so it was more difficult to get tournament points than last season. This time 4 players participated in all rounds and 22 players in total (3 less than last time where we had 25 registered players), but on average, each player participated in 5,8 rounds (much higher than the 3,6 rounds from S1).

Thanks to All for your engagement, you all made the tournament a successful event!

Here are all results of the 11 rounds of season 2 (click to enlarge):

@jaki01 is the deserved winner with 70 points! Congratulations! He scored on average 7,77 points per round (almost exactly like in season 1). The gap to the second was again quite big. I was able to get again the second rank, but it was much closer than in S1, the distance to the third ranked @yazp (zulukill) was only 4 points and shrank throughout the tournament. @pereu4ivatel (drakOnb) got the unlucky 4th spot, only 2 points were missing.
There were some strong players on other ranks like @eniolw, @jrevilla (josephchess90) or @foxconnmars, but they participated too inconsistently to gain the top spots. If they would have shown up more often, the picture would have looked quite different!

Regarding the payouts, I will do the exact calculation after 7 days, but so far it looks as if the total price pool is around 420 Hive (40 more than last season)! So the winner will get in one week app. 126 Hive, the second 84 and the third around 42. The rest of app. 170 Hive will be distributed to the other 19 players according to how often they have participated!

Next 2 weeks will be a summer break and in 3 weeks, on the 11th Sep. the next season "Autumn" will start. Block already your calendars to not miss it!

See you soon in season 3, enjoy the rest of the summer and as always: keep practicing!