Late Afternoon in the Mountains Well, well, well, a few weeks without writing a post for this event #WednesdayWalk (three, to be exact). Not that too many walks happened either. The days mostly go in order hive, swimming, hive, work, hive, and more of it. Even the weekend flew away so quickly, different circumstances and events made that Saturday disappeared, and Sunday went in setting the new laptop and playing a bit the piano. A half-crazy day surprised us on Monday, as after coming home from work in the evening, we went out to eat with friends and their family. We took a nice walk after that, but no photos to prove that. It was just a talk and walk, and anyway, it was pretty late, so no nice image could come here. As we are approaching the day of Wednesday, after this short introduction, one day is still missing in the queue. Tuesday. A "free from the work" day, as it was a holiday, I had huge plans for that day. I have planned to go around some communities here and read some posts, improve my faded engagement from the last week, prepare some drafts for at least two posts, but nothing happened from those plans. It's incredible how one can spend the day and ask later itself what useful thing has been done!? Near to nothing. After facing that cruel reality, I had to wake up from sleeping mode and do something. Go somewhere. Ok, go to the mountains was not a bad decision. Not very creative work either, but still, it's better than being in the apartment and desperately watching how the time is making the day die out. The last minutes of sunshine, painting the mountain yellow. Soon after that, everything went into gray and dark... Almost dying out literally, as it was around six in the afternoon when we went to the nearby mountains, and not many hours of daylight were ahead. We left the car close to the spring where we usually take water and went for a walk. It is a road, barely used, as the villages have a better connection with another road. This is used just for those who have a cottage or a house to spend there the weekend or summer. It is actually very nice to be there during the summer days, cooler than by the sea. Well, it is always cooler... some ten degrees Celsius of difference can be measured and felt compared to the place we live. I had just one sweatshirt, as didn't think I would need a jacket maybe. The thermometer in the car showed eleven degrees Celsius, so I walked pretty fast to warm up. But every now and then I stopped to take a photo of some flowers or mushrooms. So that the flowers do not take up a lot of space in the post, they come in the form of a collage. Don't wait for mushrooms, today... 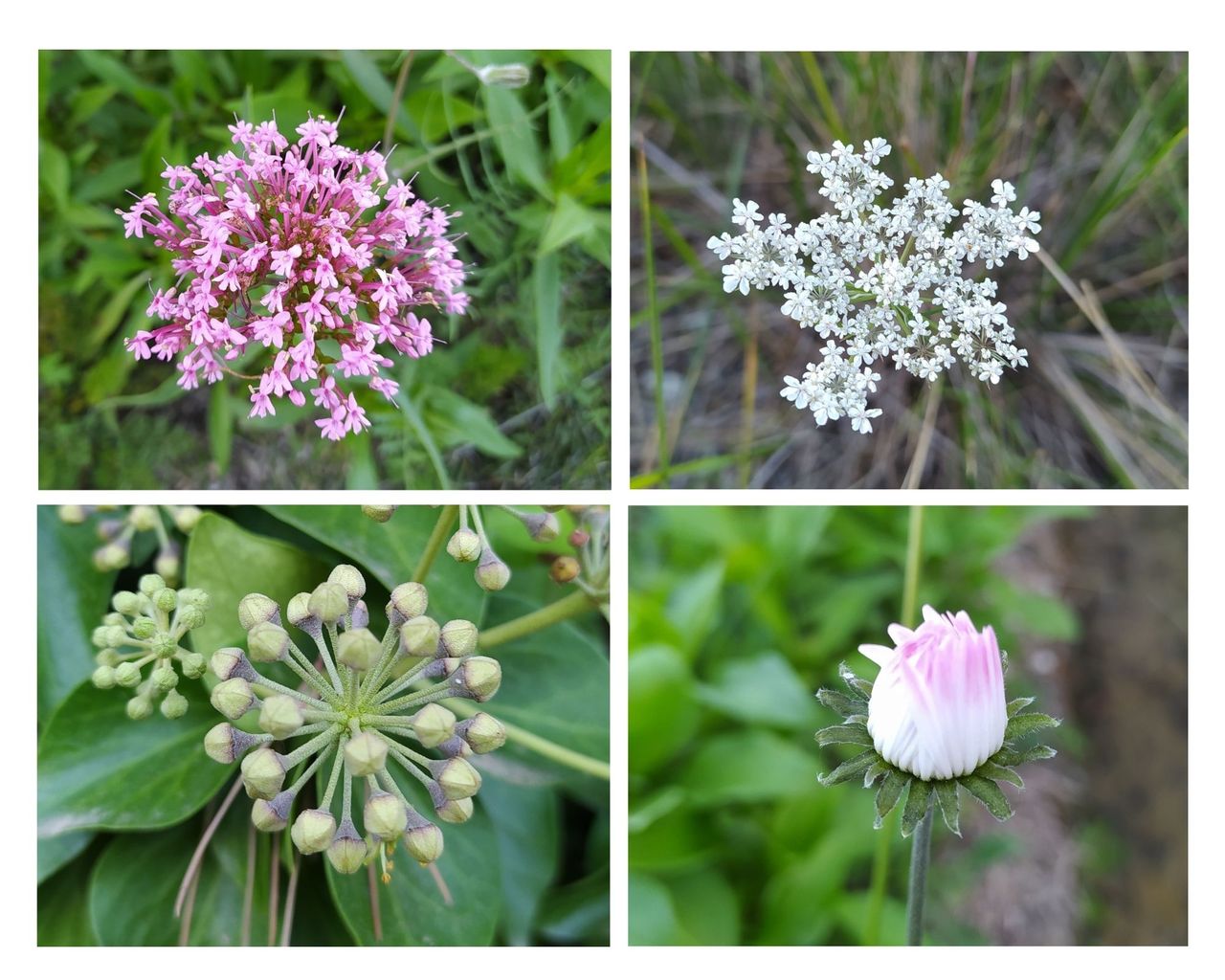 We were quite far from where we parked. But it was nice and fresh, and the walk was definitely nice. If I was in that sleep mode at home, I definitely was not in the same condition here. Sometimes, when I am in good feeling, and I find myself in nature, the euphoria wants to come to light. Then I start jumping around and running. It was also good, to warm up and stop complaining that my hands are freezing. Wouldnt be good having the keys to this house? A cup of hot tea or coffee would come as a great relief. Probably the view is the same beautiful towards the valley and hills, watching the sunset and how the colors in the nature are changing into less expressive ones and fade away completely as the evening is taking place. Somewhere here, at this point, we decided to go back, as we also wanted to take water from the spring. But, the darkness was falling faster and faster and the cold was reaching harder and harder to the bones. Well, we will not describe it so expressively, we will stay with the fact: It is late! We will fill the bottles with water in the dark. Last photos of some pinecones and mushrooms, and rushing back to the water spring. Returning to the desired place and filling bottles with fresh spring water, the night showed. Elegant, though, with these silhouettes. What was no longer so elegant were the sporadic sounds coming from the bushes, and the rustling of twigs from them. A little fox, or another animal, doesn't matter what it was, but it was a sign that we should go home. The #WednesdayWalk, that happened on Tuesday is finished here. Hope you enjoyed the walk with us and take this mini advice: Have a small jacket when you go in the late afternoon to a colder place :)