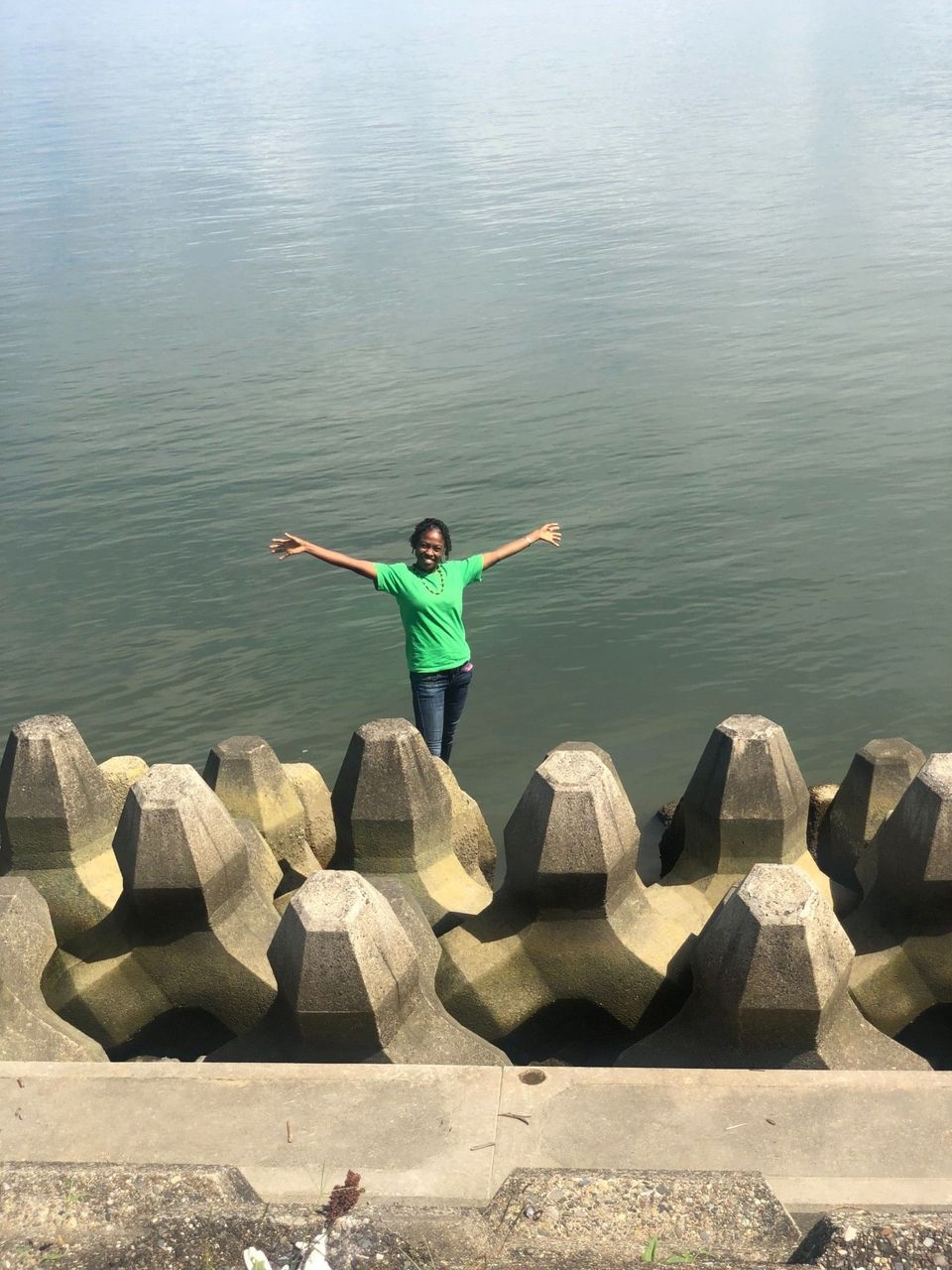 It was after 5:00 when I was alerted in bed and I knew there was no going back to sleep. I got up, used the bathroom and then prepared for a short time of prayer and the word. It is a good thing to be led by the Spirit of God. And indeed, there is great peace when we walk in the way of the Lord. But we must be listening for His still small voice “And thine ears shall hear a word behind thee, saying, This is the way, walk ye in it, when ye turn to the right hand, and when ye turn to the left.” Isaiah 30:21 KJV
https://bible.com/bible/1/isa.30.21.KJV

After my devotions, I started packing my backpack and the cooler box. It was a bit smaller than I thought so I had to creatively fit stuff in. And truth be told, I was bringing some random stuff. I’d decided I wasn’t going to go to the supermarket again and so whatever I could find in the house, I stuffed them in the box. I brought enough fruits to keep me in any event so there really was no need to be overly concerned about food. I packed a frozen water bottle and thought about taking a 2 liter one from my friend’s car. Now I remember it isn’t advised to have water in plastic bottles in cars. I’m not going to stress about it. I left home at 6:15. I didn’t check the route I’d be going again, I just decided to go whichever way. I went the first leg by bicycle which was a good way to get some exercise in. At that hour of the morning however, it was difficult to find ‘free’ parking. I had found one which was the first place I’d gone to, but when I looked at the time the train would come, it would have been about 25 minutes later. LOL. This is what I get for not checking the train schedule. And so I opted to not use that parking. But low and behold, I couldn’t find any other parking close to the next train station and ended up parking much further away and having to walk 10 minutes back to the first station. But I learnt quite a lot this morning. The morning was cool and the air crisp and clean. I enjoyed riding without my bike for that first leg, until I started sweating and realised that in all my packing, I’d not packed a rag.

After descending the seemingly endless steps into the subway, I waited a couple minutes for the train to arrive. It was my least favourite subway to take because of all the complexities of clockwise versus anticlockwise and destination. Just too much. I got to my friend’s house at 7:33 and we left out at 8:00. While j was waiting, I did a few leg and back stretches. I took a ply of paper towel to use as a rag from my friend’s apartment. When I told her why, she presented me with a small rag which she said I could keep. Would you believe I didn’t need the rag after that at all? LOL. We set off for the unknown place. I had no idea where we were going until we got there. I realised that it wasn’t a ‘cook-out’ designated place. It was an area where the river meets the sea in Mie Prefecture. It seemed to be a popular hang out spot, as there were several other cars when we got there. Many cars came and went while we were there. It was about a 45 minute drive from my friends apartment and quite close to Nagashima Spa Land where they have a roller coaster and ferris wheel. 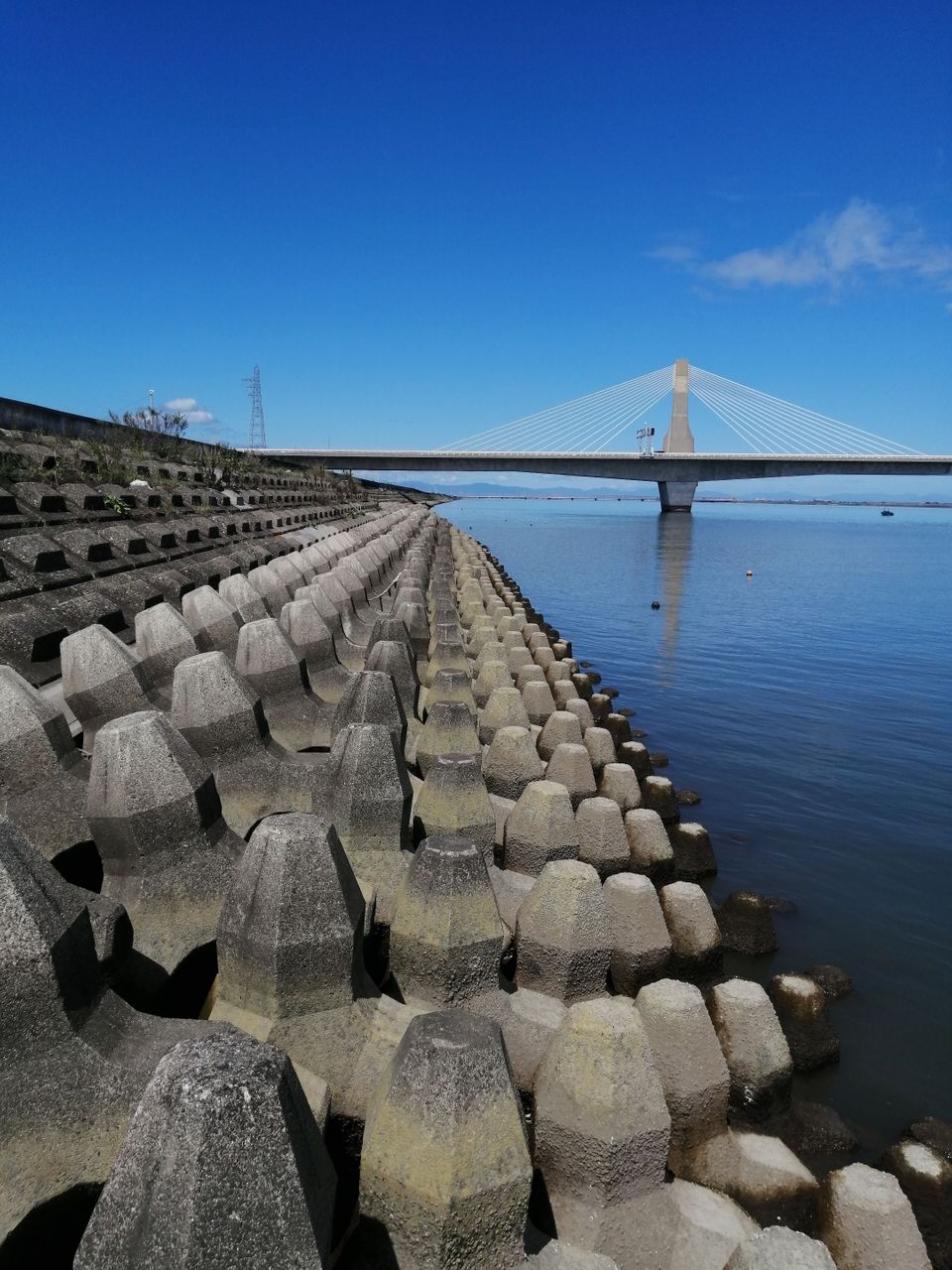 The scene was beautiful, relaxing and refreshing. I was beaming and smiling from ear to ear and my friend was happy to see my reaction. I was so excited and unable to contain myself, as I observed my friend expertly set up the portable stove and set about making breakfast. Her husband first made Turkish coffee which I had with something like Oreo. But I found out that the Turkish coffee was a bit sweet and didn’t go very well at all with the cookie as I had envisioned it would. My dad video called me while I was enjoying my morning brew and I spent some time sharing with him and allowed him to say hi to my friends. I was truly happy to hear from him. My friend whipped up some scrambled eggs and sausage while I did bacon and plantains. We shared everything except the bacon and it gave me a good feeling. My friend was also happy to know she could freeze ripe plantains and use them months later. The plantains I used today were from June 5 this year. Three months later and they were still delicious. Once our tummies were full, it was time for the backgammon showdown between myself and my friend’s husband. I got my butt whipped in 3 games back to back. But they were intense games and I felt so proud for making him sweat. LOL. He was the one who had introduced me to the game. It’s a beautiful game of skill and chance, since it involves dice. 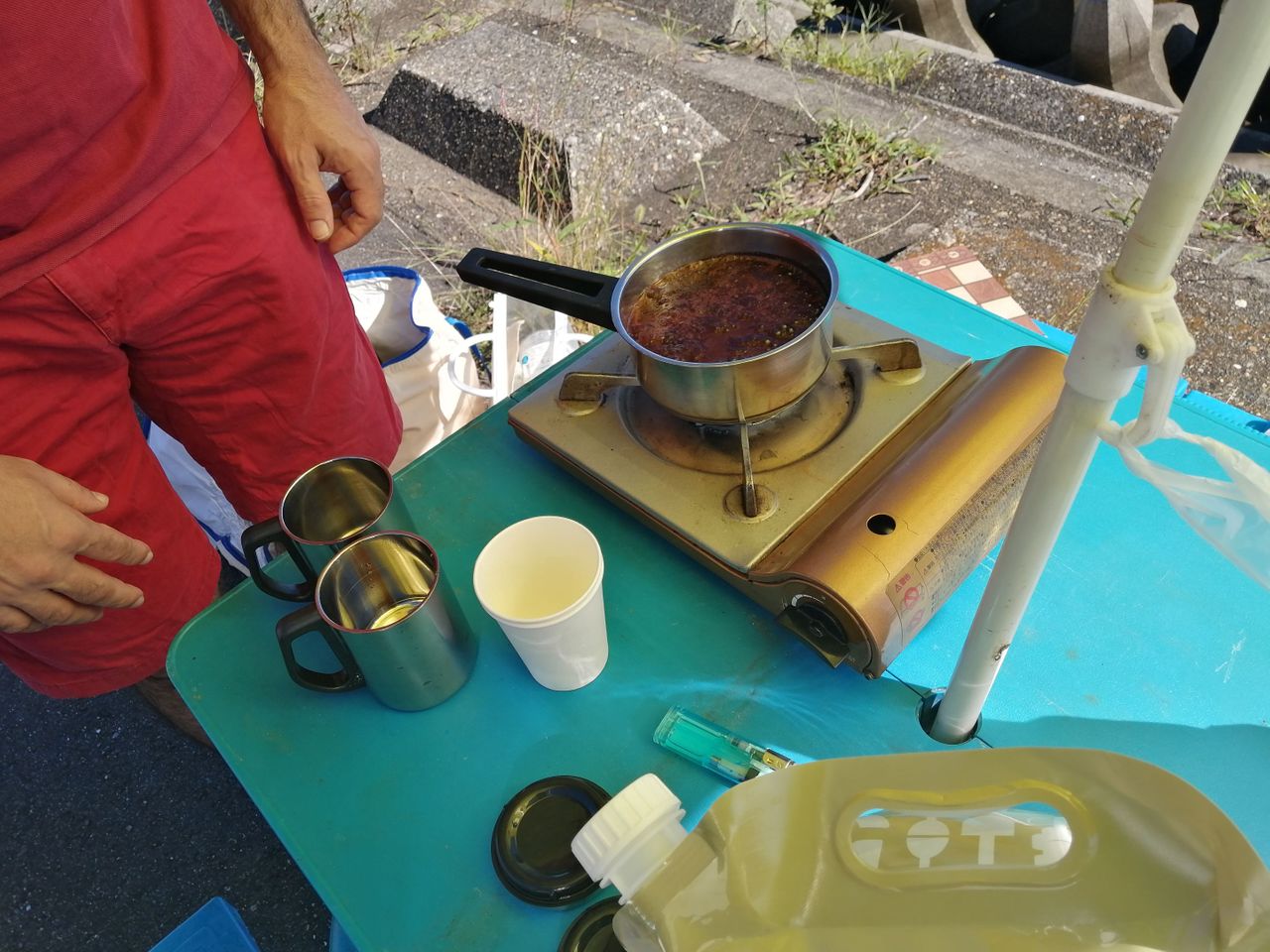 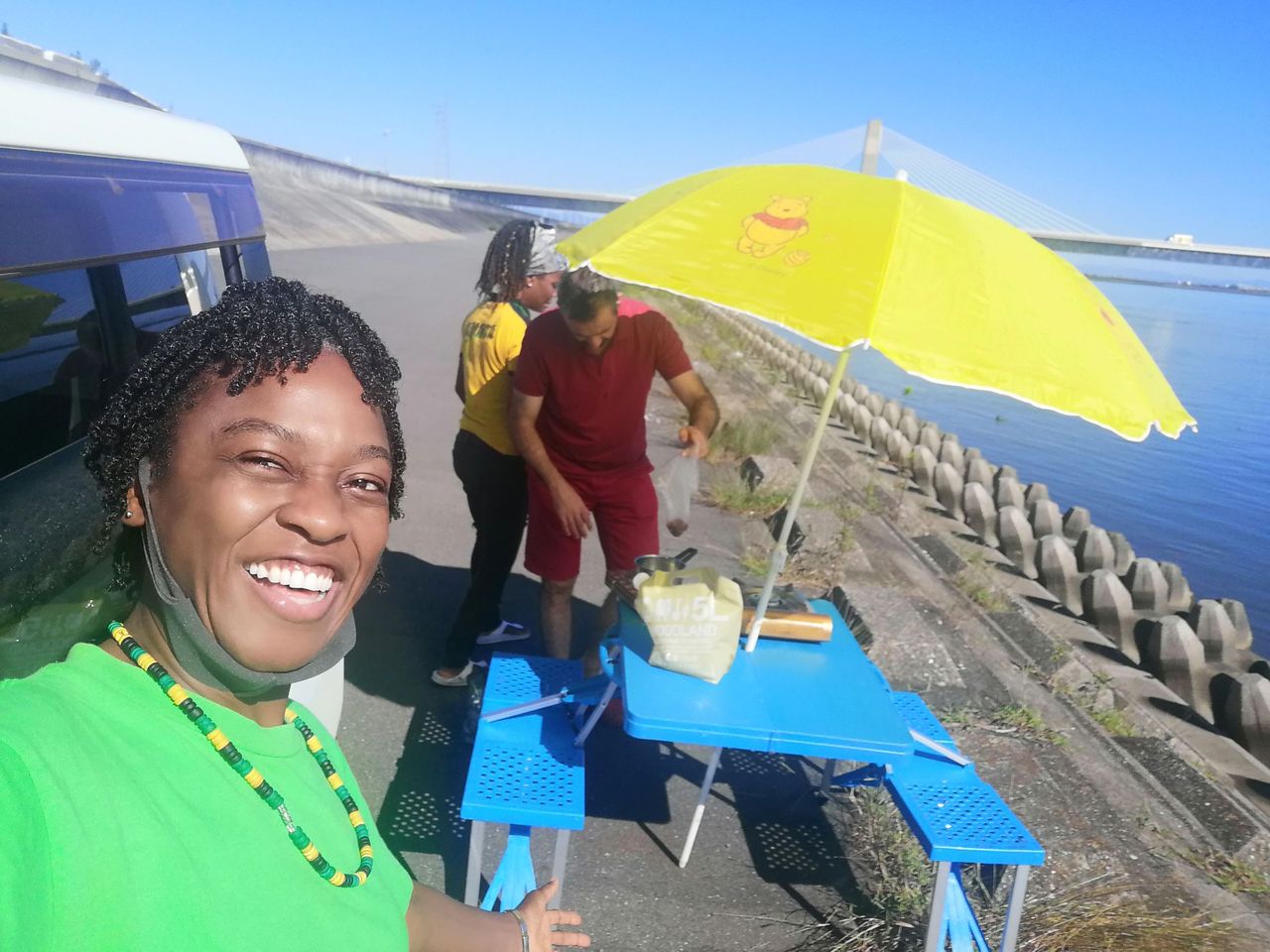 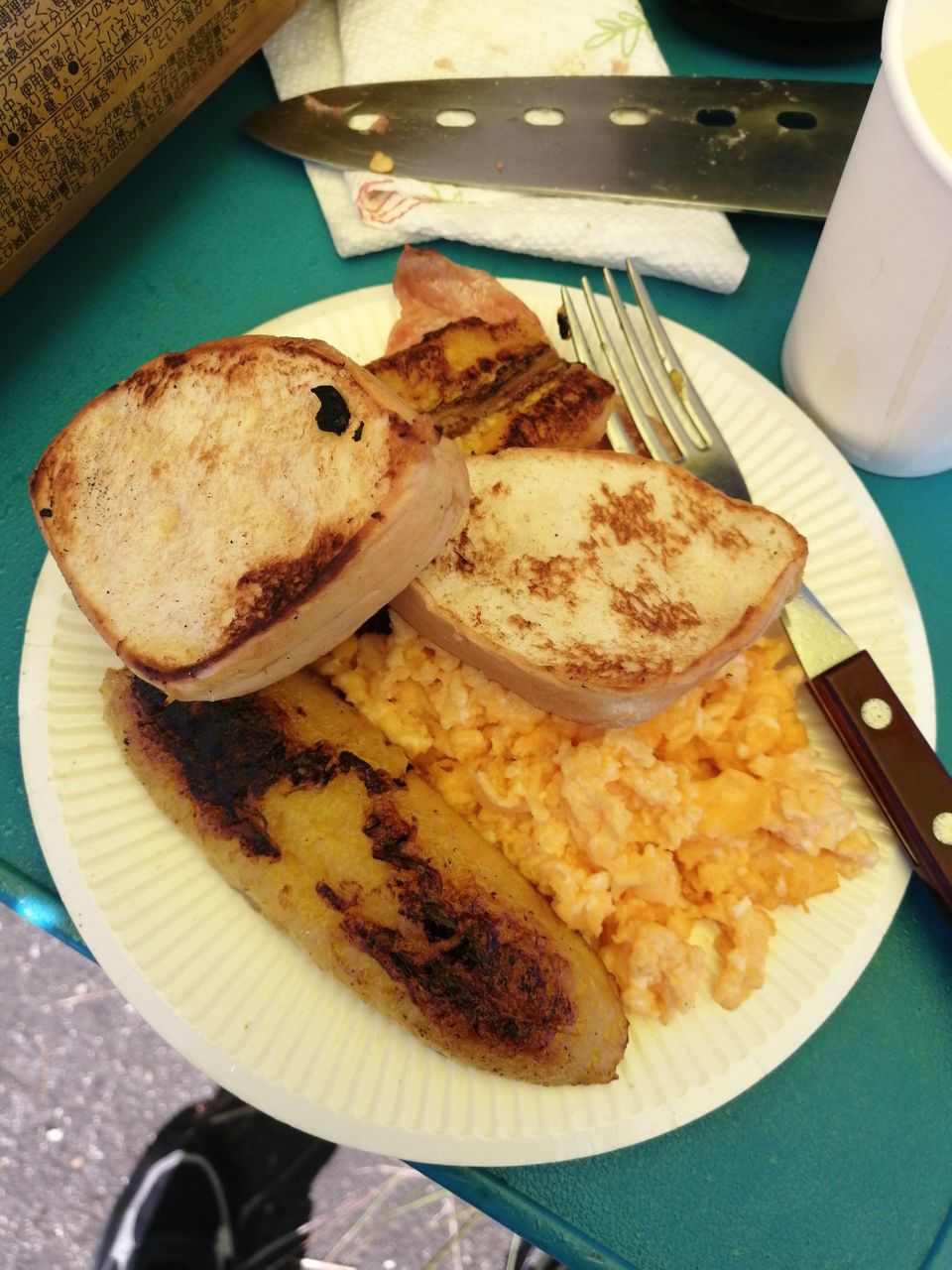 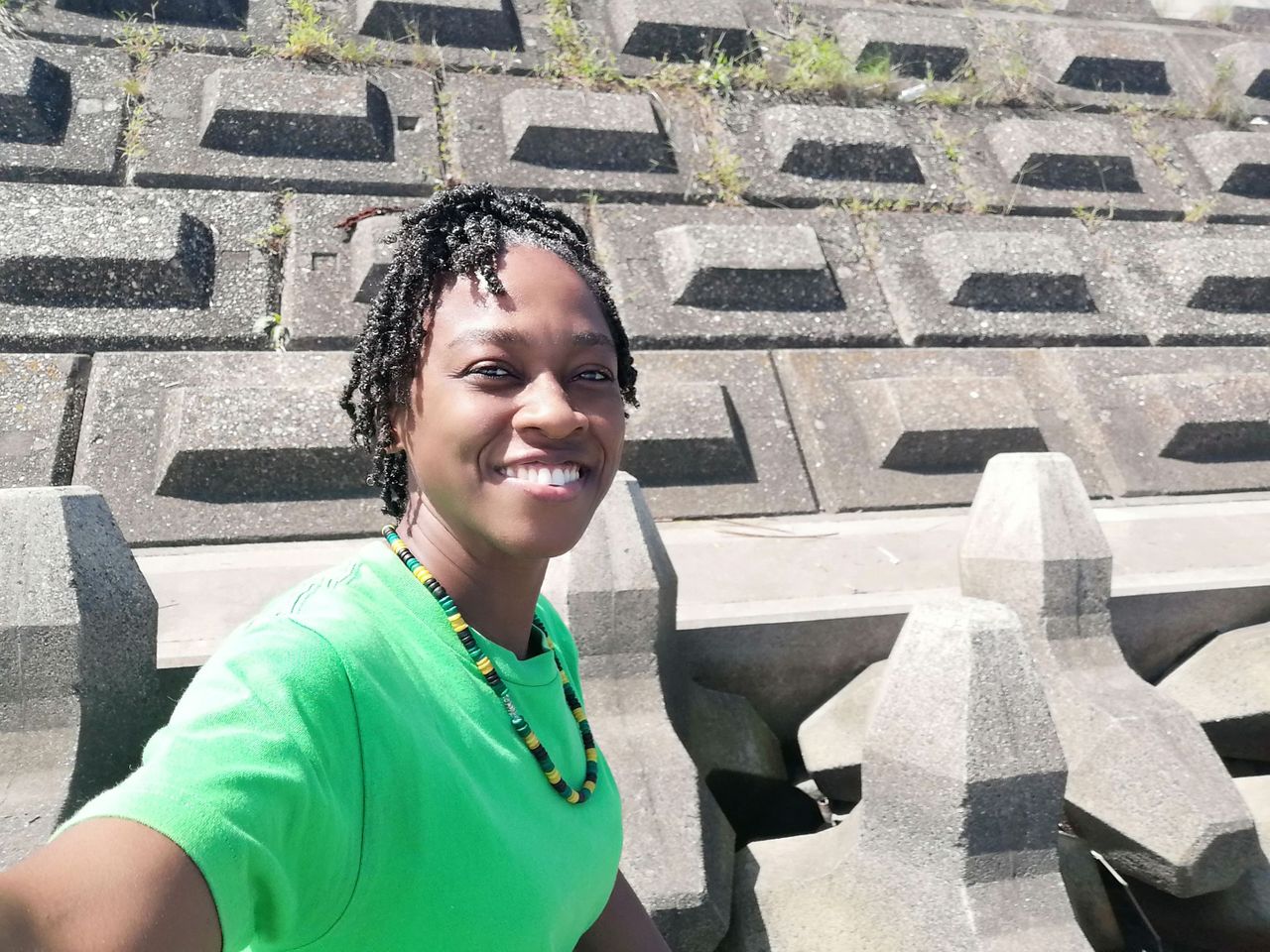 I enjoyed climbing down and swishing my feet in the water. But, I was afraid of what might have been in the water under the huge rocks and so I didn’t allow them to stay long at all. I felt so free though! We left at around 14:00 and headed back to my friends apartment. I still had another hour journey to my apartment. As I was about to leave after 15:00, my friend said I must be hungry and that I should eat something. Up until that point, I was just focused on getting home and had t given much thought to being hungry or not. But once my friend mentioned eating, I thought that I must eat something. I started to feel faint and so hungry. I had some of my friends pumpkin soup with rolls. After having that, I didn’t feel like moving at all. My friend said, now I should rest, since I didn’t have work tomorrow. But it wasn’t about having work or not, but wanting to get home before it was dark and doing stuff at home before bedtime.

After all the deliberations about which train to take with my friend, I decided to take the train in which I had to change platforms after the first two stops. My friend had advised that I just go to the station and check the information on the digital board. When I did check the board, the next two trains would require some changing of trains it seemed. Anyway, I got to where I’d parked my bicycle around 17:30. I felt really tired, more tired than I thought I should be feeling. I couldn’t quite explain it, but besides the slight uphill gradient at one section to get to my house, I was struggling for most of the journey and this was not a new route for me. I rode with my cooler box in the bicycle basket, while my knapsack was on my back. There was an ever slight drizzle as I made my way home which became heavier as I turned into my apartment’s bicycle parking area. It was 17:53 when I got inside my apartment and dropped my things on the floor. I was hot and sweating and I mused at the fact that I now needed the rag. But instead, I went right into the shower and had a cold one. Very unlike me, but it felt so good. I decided to have an apple to close out the evening, but then ended up putting clothes to soak in the washing machine. Of course, I also had to pack away my things from today’s outing. I found out that my chocolate which had been tucked at the top of the cooler box instead of inside where the actual ‘cooling’ was taking place had been melting. That created a little bit of a mess which was easily remedied with a few licks of the tongue. LOL. Now, o could end the night, though with thoughts of a messy kitchen and messy room floor with yesterday’s hairs still waiting to be vacuumed. I’m grateful to my friends and to God, for today’s experience with the beautiful weather that complimented it.