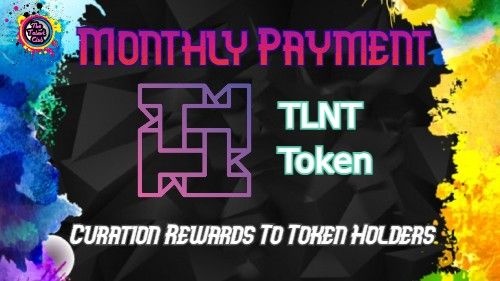 As we explained in our Token Introduction, we're distributing the 45% from club's monthly curation rewards to to our TLNT token holders, on a monthly basis.

As you also know, you need to hold a minimum of 1% of TLNT's circulating supply (10,000 TLNT at the beginning of this year) to be eligible to start earning rewards.

The interesting thing is that if you buy a certain amount of the circulating supply a year, with that single token purchase you can be generating income for years, since each year 1M of tokens are put into circulation and that will mean that the following year you will have less percentage of the circulating supply but you will continue to generate income as long as you do not fall below the minimum 1% required to be eligible to start earning rewards.

On top of that, our last update to enhance TLNT's tokenomics has been to implement a Buy & Burn system, wich thing will lead to distribute higher rewards to wider holders, every month.

Note 1: This Hive's TLNT token has nothing to do with Steemit's one, although they share the same name, put by mistake. You can read the statement we made about at here.

Note 2: Despite not having made a token migration or future planning to do so, we are compensating with new tokens, at a fixed conversion ratio, those users who bought to us the Steemit tribe token and who thus helped finance the club in some way in a past stage.

All these conditions regarding the token, its technical data, its benefits, etc., may be subject to change under a unanimous vote in favor of the Executive Board of the club.

If you have any doubt don't hesitate to ask us about.

Visit us on our Discord server!