A Newbie at Axie Infinity Diary

It’s a grind. A boring grind. Without much assistance I started and thought I was doing great. Apparently I made an error though, an error I was convinced I hadn’t made. I’m not an expert at this type of games, at least not yet, but I know a very basic principle: you need a tank. A tank to absorb hits.

I have a tank, a plant, and I thought my plant was leading the battle. I had made sure of that when setting up my team.

Apparently, the blue Axie — with the small fish icon above it — is not a plant. It belongs to the aquatic category. And that Axie at the left, the last in battle — with the heart icon — is the plant or tank. Swapping those two in order towards the end of the second day made all the difference. Suddenly adventure levels become less of a grind. More so even, in the PvP Arena my season score stopped dropping, coming always closer to 800 below which no SLP are scored anymore. Instead, I started to improve my score again, scoring occasionally more SLP too. The boring, almost depressing grind ended.

Changing the order of my tank (plant) and aquatic Axie made all the difference. There’s still some things I need to learn but in general, playing is more fun now. I guess that’s the burden of being competitive, when every loss nags you. Still played a little longer than aimed for but also my first day making more than 120SLP. I’m now at 326SLP which is around $13.2 at today’s rate. Not too bad at all given these are my first few days of playing Axie Infinity.

My team of axies is now lvl. 10 and farming adventures has significantly sped up. Thanks to an awesome 5/6 run in PvP and with a rating above 1,100 — which almost made me feel like wanting to take on @gabush, almost — I managed to score the daily achievement in only 1hr26, including a decent amount of farming adventure as well. In that time I had farmed 113SLP compared to around two hours in each previous day. Obviously, that evening I decided to farm a little more as it was a relaxed Saturday and some dull TV show was playing. Leveling up my axies was, of course, the smarter thing to do. I ended the day farming 136SPL, my highest yet all while having played only 2 hours. Tomorrow should get even better.

It’s Sunday today and this is my fifth day of playing Axie. I’ve gotten faster at farming adventures, but mostly because I play the lower levels for speed. I didn’t have too great a day in PvP and briefly even dropped below 1,100 points after few losses. I was mostly hitting axies which would keep less than 20 health and my axies just didn’t want to crit. To call it frustrating would be an understatement for a competitive player.

My day was definitely below 1:1 but eventually I managed my 5 needed wins for the daily quest. Must be all those responsible dads with better axies playing while at church service. Hopefully next few days will be less frustrating. Nevertheless ended the day with almost 140SLP and that in less than 2 hours actually.

Day 6 started with me dropping below 1,100 in PvP again after two consecutive losses to begin the week with. It’s going to be a long grind today to still score +120SLP. Additionally, Globe (local ISP) is being the turd we know it can be at times.

It ended being a poor day, especially in PvP with many losses. At some point I even scored only 1SLP for a win, but eventually I did get my 5PvP wins for the daily quest. With my axies being lvl.14 now I was able to farm higher levels in adventure, so the end daily earnings were decent. Despite still being below 1,100 rating in the Arena.

I didn’t keep a diary as it was time to write my review. If you’re too lazy to hop over to see how much you can earn from Axie Infinity, here’s the table of my first week’s earnings for you. Because I’m nice like that. :3 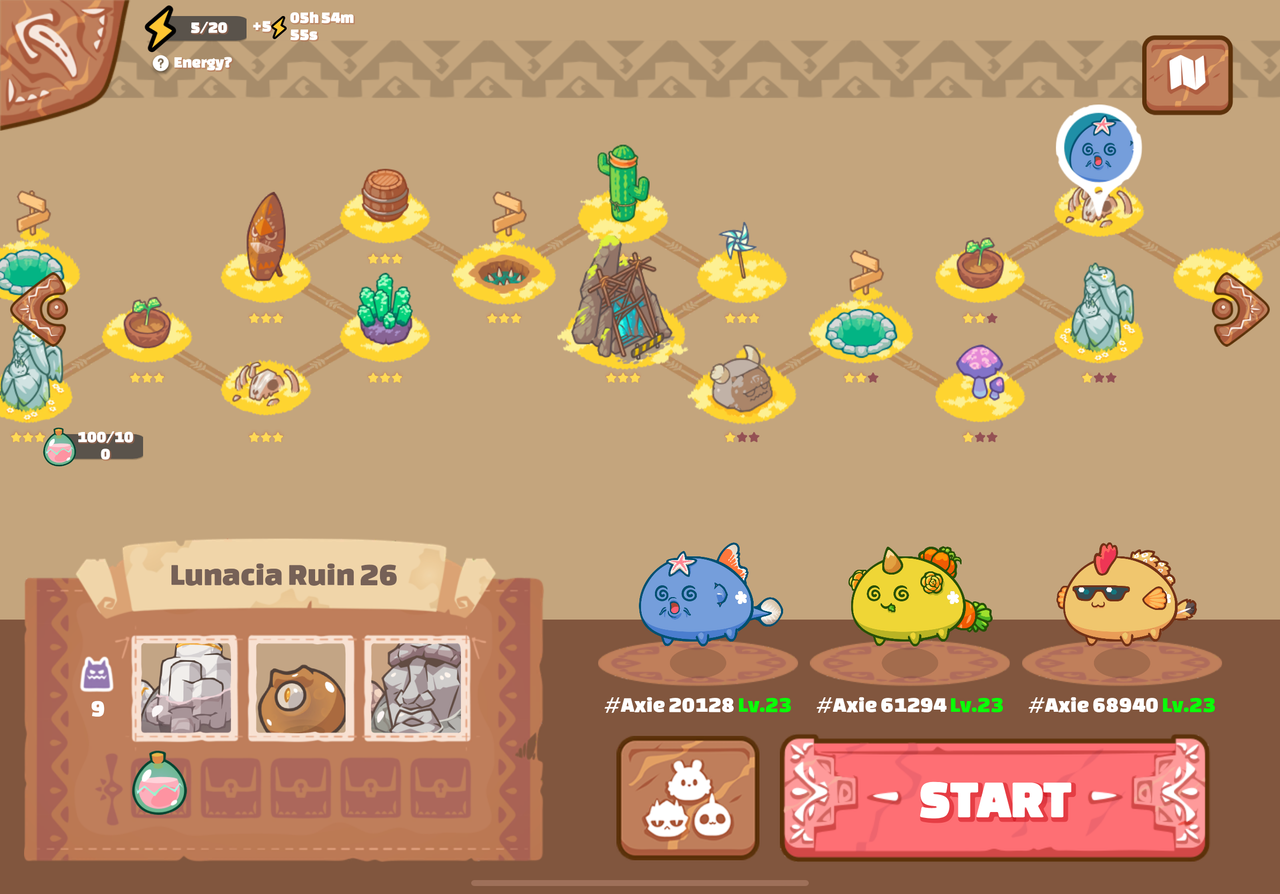 I kept playing because I actually enjoy Axie Infinity. The PvP battles can be fun, are definitely challenging at times, and absolutely frustrating too. Luckily, not too often the latter.

Axie Infinity released the new energy levels only few days after my initial review, meaning I only have 20 energy daily now. But sufficient to slowly but surely further upgrade my team in PvE and play ample of PvP battles.

With my Axies at lvl. 23 now, scoring the max. daily 100SLP in PvE is a breeze and goes relatively fast as well. I think most days it takes me only 30-35 minutes.

PvP has improved in enjoyment. I generally seem to have a ratio of 3W:2L (guesstimated), although there are, of course, bad days. I haven’t dropped below 1,200 score anymore meaning I make 35SLP minimum daily in PvP. I even regularly hover in the 1,300-1,450 points, scoring 8SLP per win. But those days are usually followed by one or two 5W:12L days. That’s Axie Infinity for you and me. 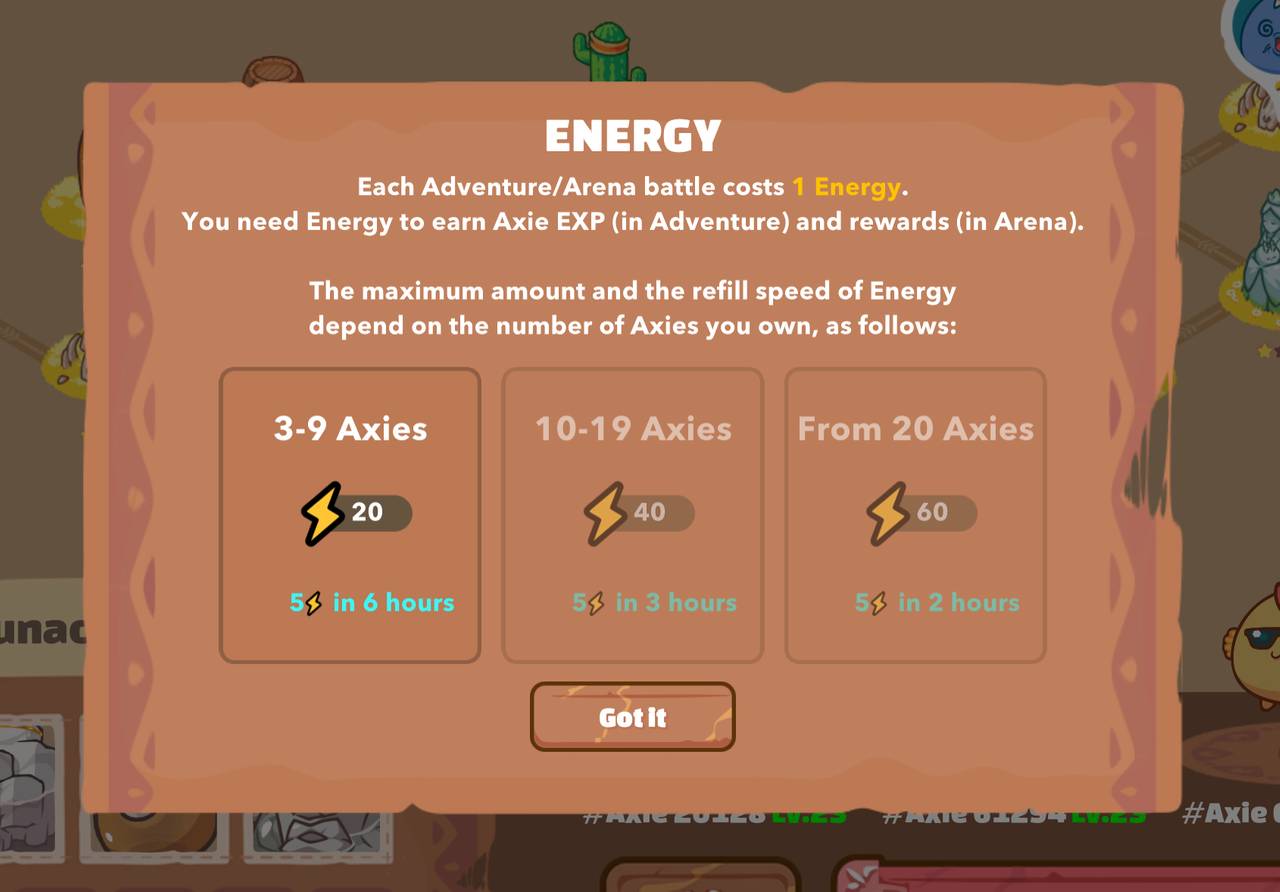 I spend now around 60-75 minutes playing daily, earning at least 185SLP daily with the 50SLP bonus from the daily quest.

Generally, I enjoy the game though. As well as the SLP earned. Except for those energy destroy cards, especially if used in combo with energy generation and critical attacks!