Time For Answers: A Tale Of Two Pizzas 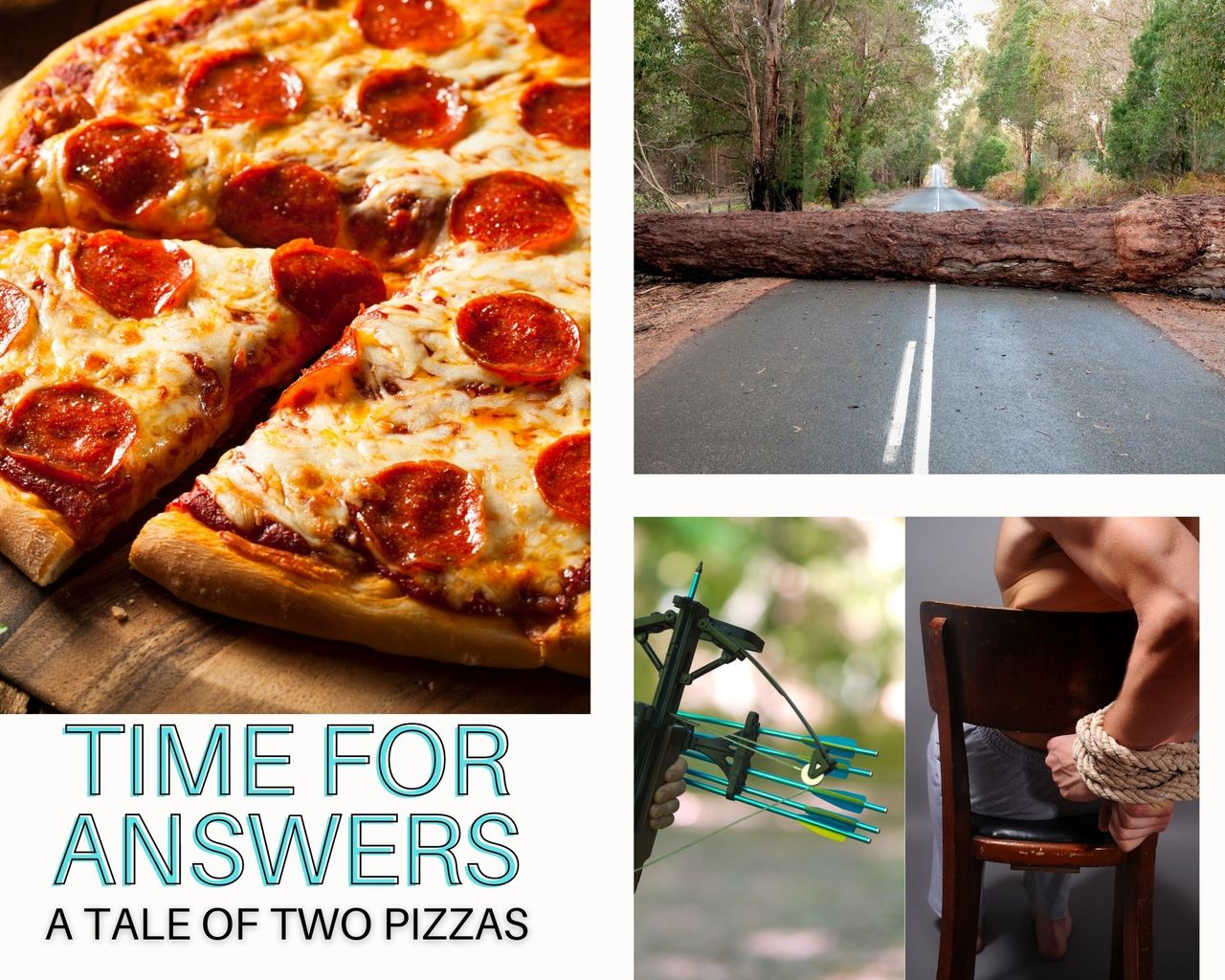 "And what is your name?" Rachel asked the quivering man again. "You can call me The Engineer." said Rachel sweetly. She was so close, he could feel her breath.

He whimpered in fear. If his comrade's shrieks of pain had frightened him, that name absolutely terrified him!

"Please don't hurt me! I'll tell you anything you want to know. My name is Mozzarella Mike. I just wanted to liberate some pizzas for the people on the dock to enjoy."

"And how do you know Otto, Mike?" she asked, getting back to the point. The details could wait.

"Well, this whole scheme was the idea of his bosses. He escorted us in the last leg of our trip to the secret meeting place, when we got our first orders."

"Exactly who are Otto's bosses?" she asked in a level tone. She had straightened up, and now towered over the man who sat helpless, tied to a chair and blindfolded.

"The Oil Baron and the Fruit Baron. They wanted to turn everyone against the Pizza Baron, by making it look like he couldn't deliver as promised. I just went along with it so my buddies and I could have a taste of the good life for once. We don't care about any of the barons, we just want to enjoy life."

"Did they say anything important? The more useful you make yourself, the better things will go for you."

He went silent for a short time. Suddenly he lifted his head, and began talking.

"I think so. That one guy, the Fruit Baron. He wants to be High Baron. And the Oil Baron wants to be the next Pizza Baron."

She already knew that the Predas wanted to steal Danny's pizza empire. But it wasn't exactly common knowledge, so it gave credibility to the information about the Fruit Baron.

"Is there anything else?" she asked in the same level voice.

"No, we didn't stay long. We just got our initial orders. After that we received instructions via messenger."

"I'll be back, my friend. And you had better not even think of lying to me." She said lovingly, brushing her lips against his neck. He shuddered so hard the chair vibrated like a musical instrument.

Techno Tommy had just begun to stir. She casually clouted him over the head. She then gagged him and Jason before slipping out of the room.

Rachel had considered this little tidbit of information worthy of an immediate report. The prisoners could wait.

"The Fruit Baron?!?! I thought he was an ally!" stormed Danny.

"I know, but he has always been ambitious. Remember when he expanded South after the Dackers and Harrels destroyed each other? He's an opportunist at heart." explained Rachel, trying to calm him. Danny had been dealt a lot, especially with Otto's betrayal. He needed to be cold and calculating right now, rather than ruled by his emotions.

"Yes, of course. I know it's not personal, but it's still unacceptable. He will have to be dealt with. And you already know the Predas days are numbered..."