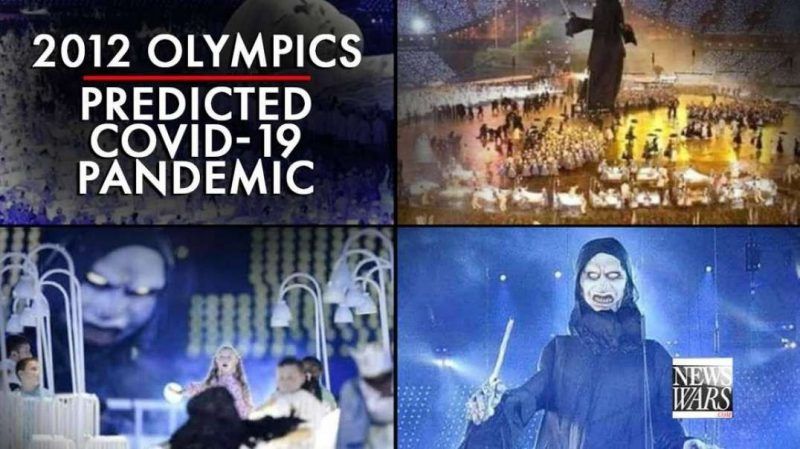 The picture above was 2012 and the London Olympics.

If you watch that opening ceremony you can see what was planned and planned well in advance.
From above the stadium that is Wembley looked funnily enough like a coronavirus, you know the computer model image they sling about on TV and in newspapers for their germ theory plandemic.

Want to see from above? 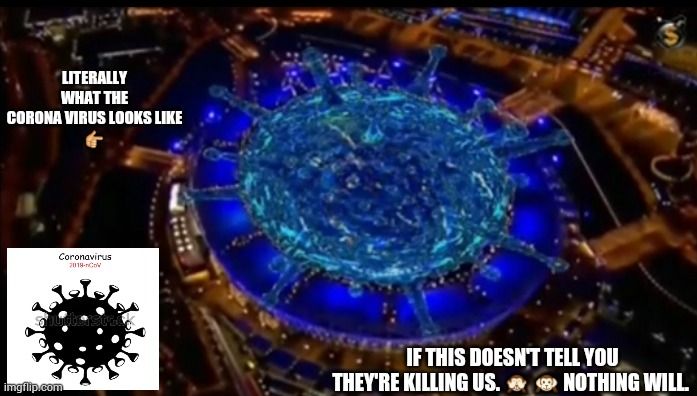 Is there a sinister depopulation agenda with regards what is going on now?

I was trying to find the earliest mention of depopulation and the agenda of it.
But there simply are so many that listing them would take one article alone.

If you look at selected so called leaders a lot of them are without child. Macron, Angela Merkel etc Research them all and you will find quite a lot have no interest in having children.
People like Boris Johnson have been banging on about overpopulation for decades. (even though that hypocrite has plenty of children with various mothers)

A quote from the man we call the buffoon below.

"The world’s population is now 6.7 billion, roughly double what it was when I was born. If I live to be in my mid-eighties, then it will have trebled in my lifetime.

The UN last year revised its forecasts upwards, predicting that there will be 9.2 billion people by 2050, and I simply cannot understand why no one discusses this impending calamity, and why no world statesmen have the guts to treat the issue with the seriousness it deserves."

There is of course Bill Gates talking about depopulation by 15% using vaccines from Ted talks around 2010 if memory serves me correctly. Easy enough to find if interested. He is also now the worlds largest investor in vaccines, no surprise there.

So my best guess is yes there is a depopulation agenda and yes via vaccines.

Where does that figure come from? Well you only have to look at the monument in Georgia in granite, the guide stones that states from 1980 "maintain humanity under 500,000.00 in perpetual balance with nature."

If we also look into history there has been a sustained push to make people think they are a problem for old mother earth. Ozone layer, global warming both seem to have morphed into climate change.
We can clearly see if we look back in time, yes mother hindsight is a wonderful thing, we can clearly see there has been a plan in place for many decades to get people almost suicidal and self loathing. The newest being climate change and ending CO2 by 2050. That CO2 is you and I. We breathe therefore we produce it.

We can also look back in time to see documents like lockstep written by the Rockefellar foundation in 2010.

‘Scenario of the Future’:

‘Even after the pandemic faded, this more authoritarian control and oversight of citizens and their activities stuck and even intensified.’

‘In developed countries, this heightened oversight took many forms: biometric IDs for all citizens, for example, and tighter regulation of key industries whose stability was deemed vital to national interests.’

They also - the rockefellar foundation that is came out with another book last year. National covid19 testing action plan.

It seems to lay out a strategy like this.

Book 1- 1 First they announce a global pandemic with a coronavirus and say what it should lead to: a whole new level of authoritarian control. (2010)

Book 2 - Secondly they give practical steps on how to apply this control system. (2020)

If we look back again in history as it is no fool. We find interesting characters like the famous investigative journalist Anthony Patch.

Here is a quote from him below.

‘They will release a man-made coronavirus. As a result the people will demand a vaccine to protect them. This vaccine will add a third strain of DNA to a persons body, essentially making them a hybrid.

‘Once a person is injected, almost immediately their DNA undergoes a transformation. This genetic change will cause people to loose the ability to think for themselves, without them even being aware this happened. Thus they can be controlled easier, to become slaves for the elite.’

We can also look back and find event 201 in 2019 with the infamous Bill Gates. Plandemic in advance.

We can also find his tweets about how excited he was for the next year and his vaccine sales.

Yes Bill I bet you were excited safe in the knowledge you would get a good payday.

So old bill Gates holds event 201 before a plandemic, simulating a plandemic, invests heavily in vaccines then a plandemic comes rolling along bang on queue less than a few months later.

Another person heavily invested in Big pharmaceuticals one Anthony Fauci was also another with a crystal ball for the future. 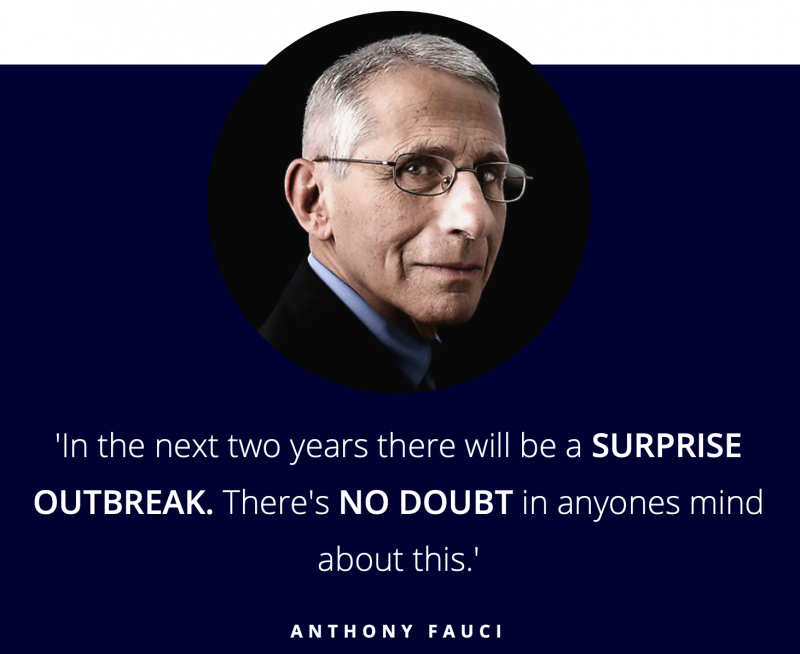 Do you think they sell these crystal balls for the future? I feel certain Bill could make a killing selling them. Or Fauci for that matter.

Now as no pandemic has ever happened before, why did the world bank issue pandemic bonds in 2017?

Seems they had a crystal ball to see into the future also hey?

I have not yet watched this I must admit. But I want to offer a link to it here all the same = https://humansarefree.com/2020/05/unmasking-the-many-truths-about-the-covid19-plandemic.html

But looking back in history you can find many hateful characters that wrote about an event like this, self loathing, self contemptuous.

Go back in time we will with our crystal ball shall we?

The year is 1968 and this is the start of the mind trick about over population, this is the agenda still being pushed now.

"As 1968 began, Paul Ehrlich was an entomologist at Stanford University, known to his peers for his groundbreaking studies of the co-evolution of flowering plants and butterflies but almost unknown to the average person. That was about to change. In May, Ehrlich released a quickly written, cheaply bound paperback, The Population Bomb. Initially it was ignored. But over time Ehrlich’s tract would sell millions of copies and turn its author into a celebrity. It would become one of the most influential books of the 20th century—and one of the most heatedly attacked.

The first sentence set the tone: “The battle to feed all of humanity is over.” And humanity had lost. In the 1970s, the book promised, “hundreds of millions of people are going to starve to death.” No matter what people do, “nothing can prevent a substantial increase in the world death rate.”

Published at a time of tremendous conflict and social upheaval, Ehrlich’s book argued that many of the day’s most alarming events had a single, underlying cause: Too many people, packed into too-tight spaces, taking too much from the earth. Unless humanity cut down its numbers—soon—all of us would face “mass starvation” on “a dying planet.”

People will offer you links to fake studies that lay claim they have isolated it. But all my requests to various governments via freedom of information acts has given me the same response, no government can provide a peer reviewed study to prove convid exists. Prove me wrong and write to them asking for proof it exists. Then await your reply that they have zero proof. I will not be holding my breath.

It is my daughters 10th birthday today and the party has started. I wanted to make this a single article but family comes first so I will break it into 2 or 3 articles.

Allow me if you will to leave you with this information below.

For those who still doubt that the fraudulent, genocidal, Communist-style tyranny of COVID-1984 was planned long ago by the self-appointed Riders of the Pale Horse, as the unnatural denouement of their reprehensible facilitation of Big Pharma Bolshevik Coups in almost every nation worldwide becomes all the more pervasively obvious, prepare to have any remaining illusions shattered.

The following statements, which were made in 1981 by powerful international banker and unapologetic eugenicist, Jacques Attali, are taken from Interviews with Michel Salomon – The Faces of the Future, Seghers edition, which was published in France by Emi Lit when Attali was a senior adviser to French President, Francoise Mitterand:

“In the future it will be a question of finding a way to reduce the population. We will start with the old, because as soon as it exceeds 60-65 years man lives longer than he produces and costs society dearly, then the weak and then the useless who do nothing for society because there will be more and more of them, and especially the stupid ones.

Euthanasia targeting these groups; euthanasia will have to be an essential instrument of our future societies, in all cases. We cannot of course execute people or set up camps. We will get rid of them by making them believe it is for their own good.

Too large a population, and for the most part unnecessary, is something economically too expensive. Socially, it is also much better for the human machine to come to an abrupt halt rather than gradually deteriorating. We won’t be able to run intelligence tests on millions and millions of people, you can imagine!

" We will find something or cause it, a pandemic that targets certain people, a real economic crisis or not, a virus that will affect the old or the fat, it doesn’t matter, the weak will succumb to it, the fearful and the stupid will believe it and ask to be treated."

We will have taken care to have planned the treatment, a treatment that will be the solution.

The selection of idiots will thus be done on its own: they will go to the slaughterhouse on their own.”

Have a superb weekend. I as always am open to question about anything I write.
If you want more links ask and I shall provide with regards to anything I have written.

No time to edit so any spelling mistakes will stand.