The power of Transparency, Learn from Crypto... 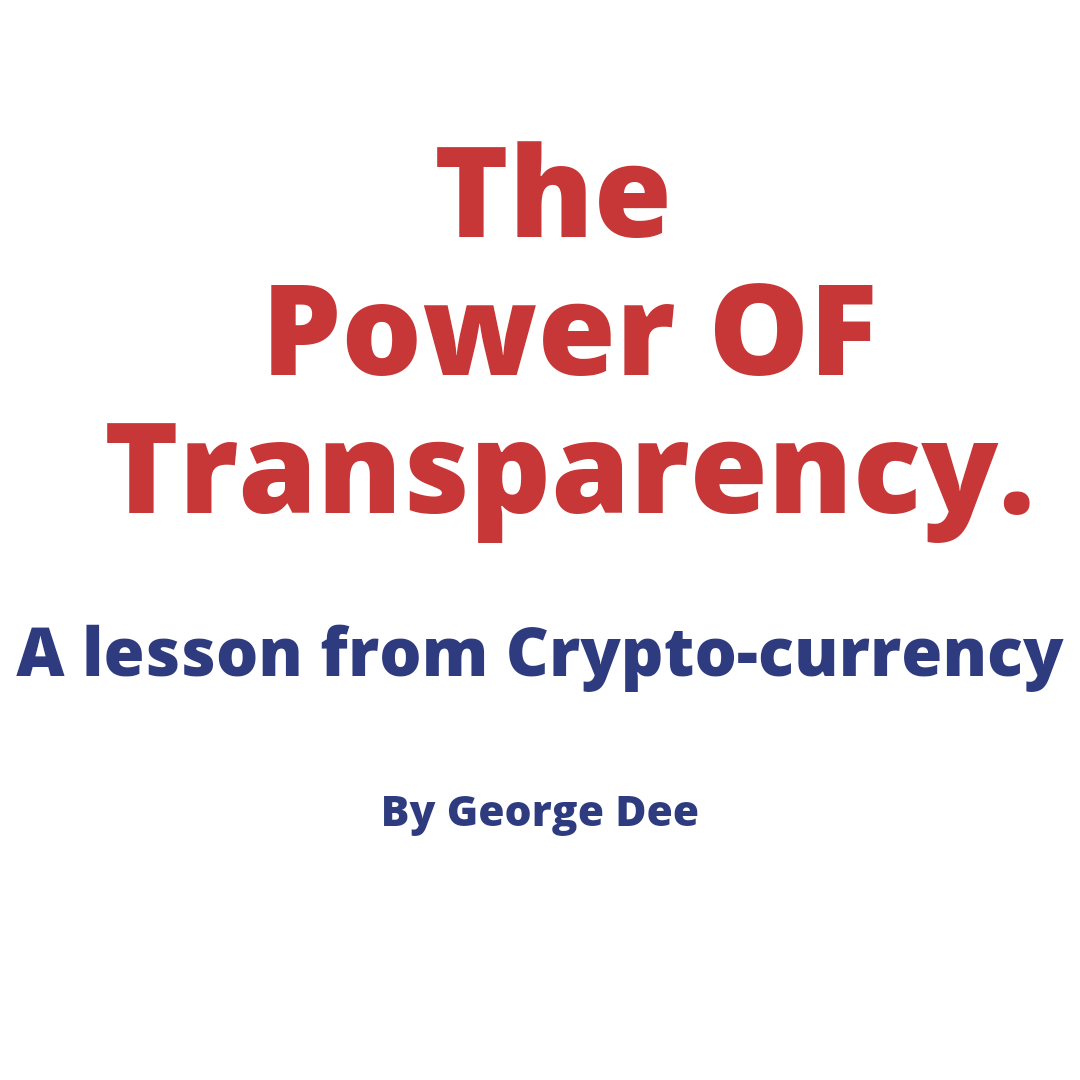 A lot of things have been damaged across the world just because of dishonesty, it baffles me how this act has been passed on from generation to generation and it keeps growing among humans.

It is something we don't see as a problem among us but its effects on the world have been very disastrous and despite everything, most of the people out of the world population still chose to embrace dishonesty just because of greed and the temporary benefits they are getting from the act.

I laugh hard and react badly when I see parents who are superb liars scolding their children for lying, they don't understand that those kids are learning from them. The kids then grow to be like the parents and it becomes something that keeps flowing from one generation to another. That's why it looks like the terrible things happening in the world can not be curbed whereas they can but it involves us all.

We have formed the habit of blaming the government for the problems we are facing today but the fact is that many of us would do worse than they are doing if we ever get the chance to lay our hands on the power they possess.

Do you believe that a simple application of transparency amongst us can change the looks of things from bad to good in the world we live in today?

Let look at it from the cryptocurrency angle because there are lessons we are not paying attention to in the world crypto has built for itself.

Cryptocurrency came into the world in 2009 and it has since then been able to accomplish what even humans couldn't which includes promoting International relationships, giving people financial freedom, and lots more. I can confidently say that transparency which is one of the attributes of cryptocurrency has made it flourish more than it was expected to do in just 12 years of its existence.

Crypto transparency is what has exposed the dishonesty of the banks and how they have stolen from us all this while we thought they were helping us. This same transparency is why the governments and powerful greedy people around the world are trying their possible best to silence the future.

That might not sound convincing, let me show how transparency can make the world a better place for everyone irrespective of your tribe, race, educational background, health conditions, and financial status.

Transparency in the government:
I believe that this is where the biggest form of transparency is needed all over the world.

The government has become a corrupt body across the world because the foundation is now built on dishonesty, people now aim to be part of the government just because of their selfish desires, they are only interested in embezzling the public fund instead of focusing more on the service they are meant to render to the people who bestowed power.

Imagine simple transparency in the government of a country.

Imagine the citizens of the country are been carried along with everything happening in the government.

Imagine people are been allowed to express their minds freely as a result of transparency in the government.

Wouldn't the world be a better place there was just 50% transparency in the government? I believe that most of the problems the world is facing might not have even existed at all.

A simple approach of transparency in elections for appointing leaders is enough to make the world a better place but it is the other way round. The problems start from rigging elections, the evil people are elected and chaos escalates.

What the citizens want is transparency but it is much for the people in power to give out.

Transparency in Relationship.
A lot of marriages have crashed just because of dishonesty, secrets, and others, sometimes I ask why people can't just exhibit transparency in their relationship and this same people are the ones who point fingers at the corrupt people in the government.

Many relationships would have remained peaceful and happy if couples choose to be transparent with one another. Someone once told me that opening up completely to your spouse is complicated and I asked why? He said "some things are meant to remain secret", this is what many people believe but have you thought of the repercussions when those secrets are forcefully exposed?

If you are in a relationship and can't open up to your partner completely, it means you are either in the wrong relationship or you are doing something that's is against what your relationship was built on.

I have met someone who justified her act of dishonesty in a relationship, she decided to use her temple to get what she wants because her lover couldn't provide them. My question for her was why she agreed to be with him when she knows he doesn't have what he wanted?

No reason justifies a dishonest action, it is better to walk away if things seem unbearable.

The power of transparency can't be ignored, it can mend the damages dishonesty has caused the world. Demanding for transparency is wrong when we aren't practicing it ourselves, every change we demand must start from us at the grass root.

The question now is that will the world ever embrace transparency? I don't think so but let me hear your point of view.

The post was originally written by me and it first appeared on another platform.