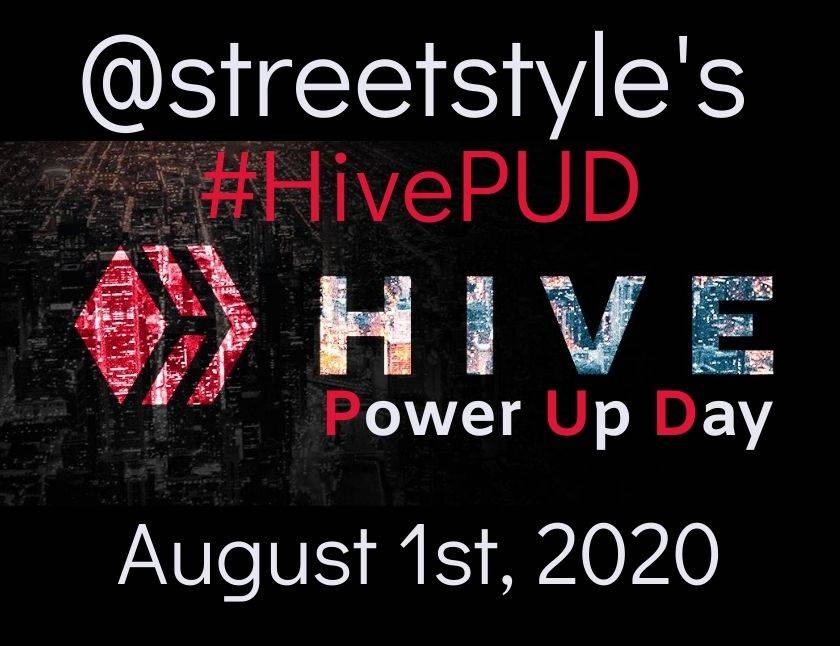 Hard to believe it's already been an month since my last #HivePUD announcement post - time flies when you're having fun, eh? 😂

In a little less than a week, the next Hive Power Up Day arrives on August 1st 2020! Since @streetstyle is still AFK (away from keyboard), I'm continuing to run his initiative in his absence, as well as sending good thoughts in his direction and hoping we hear from him soon that all is well.

Rules to Win Prizes for HIVEPUD

Again, in @streetstyle's words (with my changes edited in)

MUST make a post about your POWER UP on AUGUST 1st with the tag HivePUD . It can be as simple as "I powered up X amount of HIVE COIN" to a simple picture/screenshot of your Power Up and posted to your HIVE blog, or it could be a super long dissertation on HIVE Power. IMPORTANT:use HivePUD hash tag so that I can be sure to see them.

another HIVE member has 300 HIVE Powered up prior to AUGUST 1, and on AUGUST 1st Powers Up 60 HIVE Coin, then this 2nd user would be winning with a 20% power up versus the first example with a bigger power up but smaller percentage of only 10% based on their account.

In addition to making your own vote more valuable and adding to your curation rewards (as well as earning interest on your stake), some amazing members of the Hive community are offering prizes that include delegations, Hive giveaways, and other cool stuff (listed below). I've also upped my prize game for this initiative - in addition to my longstanding 10 Hive giveaway, I've also offered a handful of delegation prizes (along with @nathanmars) for those who qualified through the brand-new-this-month Five for #HivePUD initiative, which runs from the 5th to the 25th of the month. However, since we have a total of five prizes, and only four entries from two people (@fionasfavourites with one post and two tweets; @jeanlucsr with one tweet) in July, I'm going to do something a bit creative with the prize awards (which I'll announce in the official winners post), and I'll work on getting the word out more effectively for August.

And once again in @streetstyle's own words...

If you'd like to jump in and offer a prize for future #HivePUDs just shout out either in the comment section, or on Discord (traciyork#4860) and I'll be sure to update the prize list accordingly!

And no worries if your account is too big/small to qualify for an "official" prize - remember that any time you power up, you "win" a bigger upvote and more power on the blockchain. Can't go wrong with a prize like that! 😍

I know everyone confirmed for last month, and many said to just go ahead and assume that these prizes are confirmed again, but lots of things can change in a few weeks time. So I'm going to mark them again as ⛔ (NOT CONFIRMED) for now, and will update it to ✔️ (CONFIRMED) once I know for sure.

Shout out to the Hispanic #HPUD Initiative!

Last month I discovered that the amazing @victoriabsb started a #HPUD initiative for the #HiveVenezuela community (and I believe a few other country specific ones have popped up as well). It was such a success that not only is she doing it again for August, she's expanded it to the Hispanic community at large!

That's it for now!

Thanks to everyone for all you do to make our new blockchain space a home! Special shout out to @abh12345 for graciously agreeing to help me again by pulling together the data when the time comes - Asher, you're a ROCKSTAR! And here's to another awesomesauce Hive Power Up Day - I think we're doing @streetstyle proud!

Image Credits: blog thumbnail created on Canva, using a photo (that I first spotted on a post by @fionasfavourites) created by @nateaguila which is "free to use for the purpose of supporting, promoting, or marketing Hive-related topics or projects." HivePUD GIF created using both Canva and ezGIF.

Blog graphics created on Canva
My photographs are taken with my trusty Nikon,
sometimes utilizing my handy dandy tripod.

All words and images are mine (unless otherwise indicated),
and can sometimes also be found on my various social media sites.
Speaking of which...


I have many homes on the interwebz.
Here are a few...