This is Jack Handey Jack is a humorous man who's made a career writing humour.


He can spin a handy yam. With words.

Jack is a writer. He has written books, comedy for TV, news, surreal wit and poetry for his pet rat. However, there’s a particular style of writing he's become well known for. Unique, ironic, absurd and aphoristic: his signature Deep Thoughts “If I ever opened a trampoline store, I don't think I'd call it Trampo-Land, because you might think it was a store for tramps, which is not the impression we are trying to convey with our store. On the other hand, we would not prohibit tramps from browsing, or testing the trampolines, unless a tramp's gyrations seemed to be getting out of control.”
- Jack Handey. Deep Thoughts, 1992 During the rest of the 1980s, Jack’s work appeared sporadically in other American magazines, newspapers and TV shows.

He then worked as a writer for comedy sketch show Saturday Night Live, and from 1991 to 1998, Jack’s Deep Thoughts were turned into interstitial segments — short recurring features run between skits. Set to stock footage of landscapes and calming scenes, the author narrated while the text scrolled. The results were surreal parodies of New Age affirmations widely enjoyed by viewers.

Compilations in book form were published through the 2000s and sold well. More writing projects followed like What I’d Say to the Martians and Other Veiled Threats in 2008 and a novel in 2013: The Stench of Honolulu, among others. At time of pixel, his most recent book is the self-published Please Stop the Deep Thoughts, released in 2017 and available from his website “The big, huge meteor headed toward the Earth. Could nothing stop it? Maybe Bob could. He was suddenly on top of the meteor—through some kind of space warp or something. "Go, Bob, go!" yelled one of the generals.
"Give me that!" said the big-guy general as he took the microphone away. "Listen, Bob," he said. "You've got to steer that meteor away from Earth." "Yes, but how?" thought Bob. Then he got an idea. Right next to him there was a steering wheel sticking out of the meteor.”
- Jack Handey. Deeper Thoughts, 1993 I was fortunate enough to discover some Deep Thoughts in the mid 2000s. It wasn’t through a book, a magazine or a TV show, but a text file on a random website. Before the Web became monolithic and monopolised by corporate interests, unique homepages created and maintained by individuals made up the bulk of the online experience. This was a fledgling time where each site needed an animated graphic or six, MIDI music was set to autoplay on page load, a rolling visitor counter was a necessity and people thought "Under Construction" signs were nifty. It was all janky as a sardine biscuit but it had heart, man.

At least one person, and probably several independently, took the time to type up some of Jack’s creations and host them on their own servers. I don’t exactly remember how I discovered the selection that I did. Just luck, I suppose. I knew nothing of Handey or his career at the time. But, on that fortunate day, I printed them out, grabbed myself a folder and sleeved those bad boys ready for school the next morning. This stuff was like lightning in a bottle, on paper. Writing that could actually make you laugh out loud! Who knew that could exist? I certainly didn't at just over a decade old.

I was keen to share it with anyone who’d listen, and so the Deep Thoughts in that plastic folder lived in my backpack for quite some time, emerging whenever I encountered somebody else with a sense of irony. 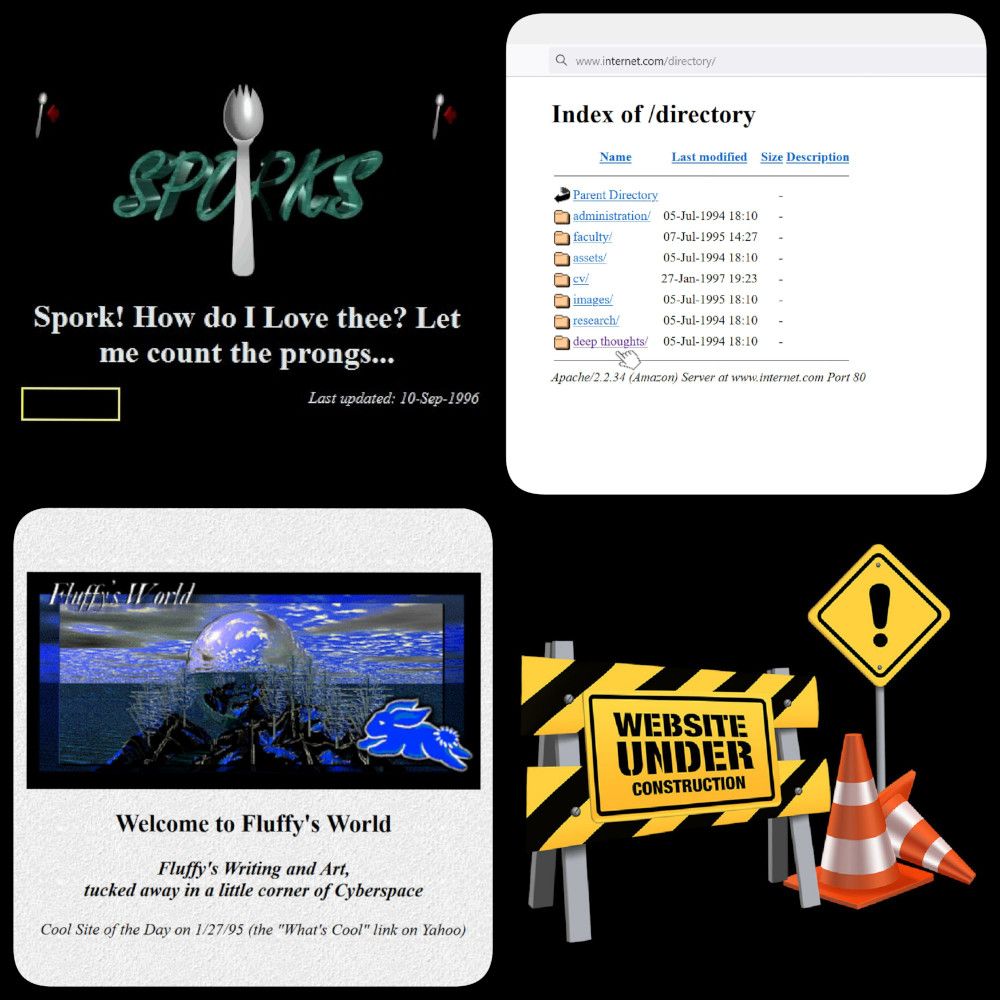 If you ever crawl inside an old hollow log and go to sleep, and while you're in there some guys come and seal up both ends and then put it on a truck and take it to another city, boy, I don't know what to tell you.
- Jack Handey. Deepest Thoughts, 1994

I am not Jack Handey. I am but an enjoyer of his style and humour. I have also been a Hive account owner since the beginning and treasure this blockchain as a permanent digital record of text, among other things. This aspect is immensely valuable. It’s the closest thing we have yet to Internet Stone Carving and is just one way the technology is underestimated in the long term. A few weeks ago, apropos nothing, that school-age memory of online discovery came surging back to me, ending a 20 year span of total forgetting. Suddenly, I had the desire to track down and read Jack Handey's Deep Thoughts once again.

And now here I am! Wanting to share them all with you. And also now I can go a huge step further and commit them to a distributed network that literally never forgets. So, consider this account and it’s postings the first, but hopefully not last, Web 3.0 mirror of Jack Handey’s Deep Thoughts.

My coincident intentions are to have some fun, share a few laughs and introduce his work to a broader audience. I’m interested in what you think, so comment away. I have no interest in profiting from the work of someone else, so author rewards are turned off. And I also do not want to present myself as the author of the Deep Thoughts or take any credit for them, so each post will contain a reference to the original source and a link back to this post so people can read up about what the hell's going on.

We'll go with that.


Alright, here's the breakdown: Jack Handey is the author of a large body of written humour he calls Deep Thoughts and I am not Jack Handey. For further clarity, refer to the top of this post and work your way down. Okay so you see that? That just now. It might look like a photo of a rock. Or a pebble. Maybe a stone, even. In truth it's actually none of those things. Not a rock, not a pebble, not a stone and definitely not a photo. What? That's right. It's a completely generated image.

Perhaps your house exists entirely within the underside of said rock, and you haven't seen all the online commotion about text-to-image systems lately. Dall-E earlier in the year and now Stable Diffusion. Ubiquitously but erroneously labelled artificial intelligence, these machine learning algorithms are actually domain-specific statistical models, with extra steps, and they're getting pretty good at creating interesting pictures from text prompts.

To add a visual dimension and thumbnail to each post, I'll use each Deep Thought to prompt an instance of Stable Diffusion.
This one right here
Try it yourself! Four images are produced per prompt, but each post only really needs one, so I’ll be curating and choosing the subjective best.

So, the plan is this:

So the plan was that, because I hit a snag: I ran 20 Deep Thoughts through to test the approach and found some of the longer ones tend not to produce images at all, per se, but walls of generated ‘text': I tried steering the model away from this sort of output by expanding the prompt: Which also... nope. Yelling at it didn't work either. The prompts are just too long. Too many words. After a certain point the model’s training data clearly shifts association from actual pictures to images of quotations, which the Internet has in spades. The Internet being where the model's training data is sourced. You've no doubt seen this kind of stuff around, but here’s a very clueless example I found: If you’re familiar with the lyric, you’ll understand that the creator of this image has completely missed the point of the song it’s lifted from: Oh No, the ninth track from Weasels Ripped My Flesh.

Well anyway, back to the story. What if I reduced the prompt down to a few keywords, making a lexical kernel of the Deep Thought instead? Might work.

It's a compromise. I was hoping to generate an image for each Deep Thought based on nothing but the Deep Thought as it is. No more, no less. But, hey… what can I do? I'm not getting the results. Onward!

So, in order to make it a little more, I don’t know… scientific.

Aaand in the interest of keeping this whole thing terminally online, I searched around for a web application that could analyse text and label the component parts of speech. You know: the nouns, verbs, adjectives, all that.

Then I found Parts-of-speech.info by Stefan Schramm

I ran the Deep Thought through and got this: Okay, cool. So what happens if I just take the nouns and use that to prompt Stable Diffusion? Out of curiosity, I tried just the verbs too. Well that is interesting, but not so useful. Just nouns it is.

I wonder what a linguist could say about the model producing mostly 'text' from only doing words? Maybe nothing. Maybe a whole lot. What are the implications of this, sociological or otherwise? What does this say about the found nature of all the text-image pairs online that went into training Stable Diffusion? What does it say about humanity more broadly? Maybe a whole lot. Maybe nothing. One image generated from a handful of verbs isn't a great sample size, to be fair. And some of the words don't have obvious pictorial counterparts, being a bit abstract like: 'have,' 'been,' 'done,' 'was,' 'set.' Even with all this in mind, I'm reminded of the song Plateau by Meat Puppets, the one covered by Nirvana in 1993, with the line:

Who needs actions when you got words? And well yeah, that's enough words from me.
Time to get on with it.

I made a Hive account to post Jack Handey’s Deep Thoughts one by one. Author rewards are declined. I'm having a machine learning model create an image from and for each Deep Thought by feeding it the text verbatim. If the model fails to create a decent image, I give it the nouns only. What I'd Say to the Martians and Other Veiled Threats:
Barnes and Noble

The Stench of Honolulu:
Barnes and Noble

Frank Zappa lyric from 'Oh No' presented in a way that completely misses the point:
Quote Fancy

Every once in a while, everybody has one or two deep thoughts. I happen to get a lot of them.