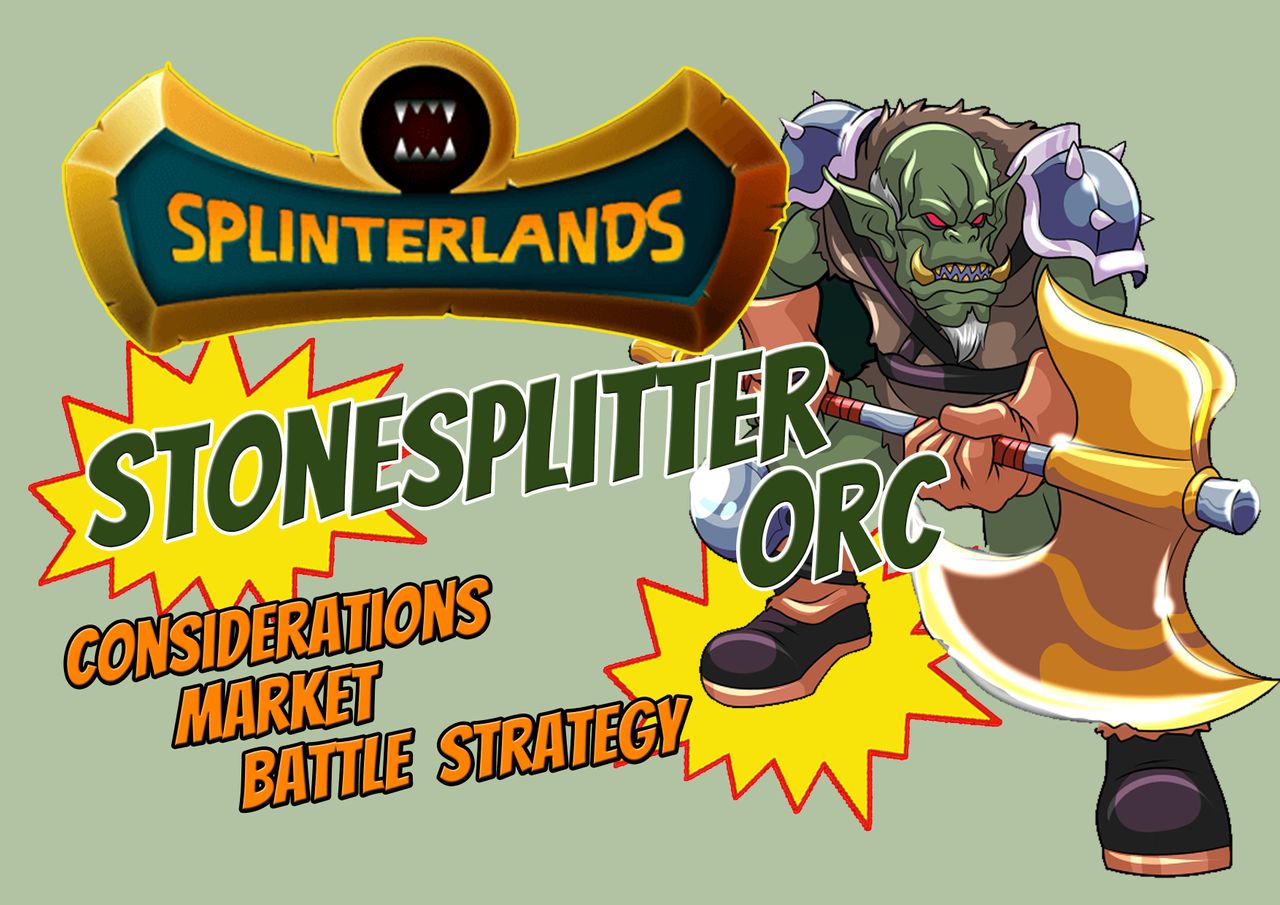 The topics I'll be covering in this post are as follows:
. 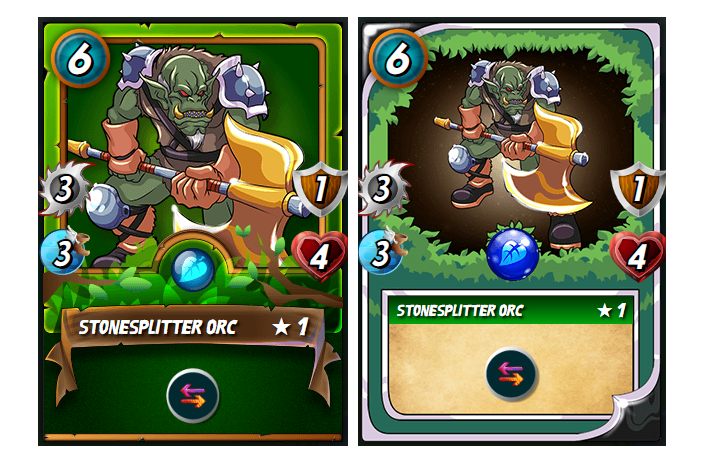 Stonesplitter Orc is a card that is part of two different collections: Alpha and Beta.

It is a Rare card and is a card of the element Nature.

Stonesplitter Orc of level 1 has the following stats:

The Retaliate ability allows Stonesplitter Orc to have a chance to counterattack the opponent's card with a melee attack that hit it.

When it reaches level 5, it acquires a second ability: Enrage.
Cards that have the Enrage ability increase attack points and speed points when they take damage.

In the following image you can see the complete statistics

In the following image you can see the complete statistics

To reach level 3 you need:

Level 6 is the level that, in my opinion, has the best benefit/price ratio!
When Stonesplitter Orc reaches level 6 it gains its second and final ability (Enrage) and, compared to level 3:

To reach the maximum level (8) achievable by Stonesplitter you need:

My advice, especially for those who have a not very large collection of cards, is to upgrade Stonesplitter Orc to level 6 at the most because spending at least 8 dollars more to have 2 more life points and 1 more armour point than level 6 is not a very reasonable choice because it is important to first expand your card collection to have more strategic choices and only then max the cards in your collection.

Now let's see how Stonesplitter Orc behaves on the Battlefield

A battle of mine with Stonesplitter Orc 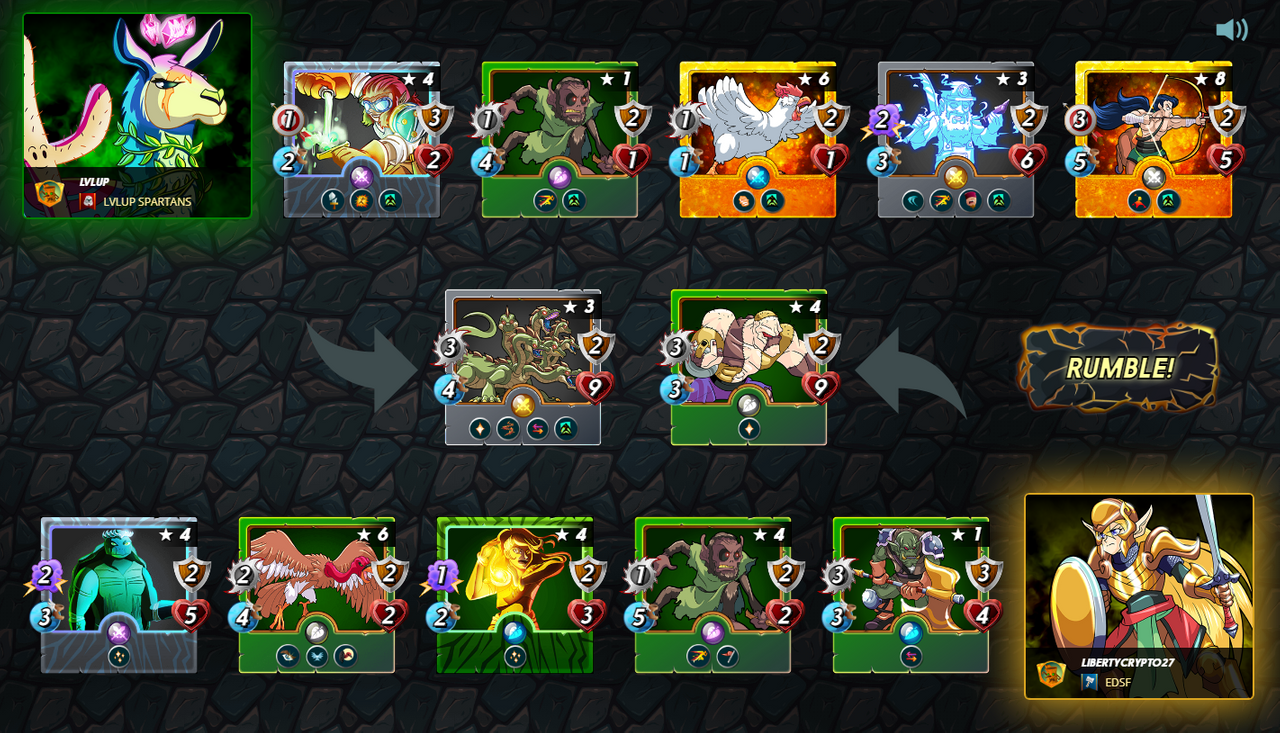 In the battle of this post I had the following conditions to respect:

The maximum number of cards that can be deployed in battle is 7 (1 Summoner + 6 monsters)
.

First position: I have deployed Flesh Golem (level 4) in the first position because it has a good starting attack of 3 points, has 9 life points that guarantee a good level of survival in battle and has the ability Heal that guarantees a recovery of 2 life points every round of play.
Thanks to the combined use with Brownie and Daria Dragonscale his attack increases by 2 nits (3->5).

Second position: In second position I have deployed the protagonist of this post: Stonesplitter Orc (level 1).
A card that I don't use much for the reasons I explained above but that can be very useful in battles that have precise combat rules.
I chose the second position because it provides a little more protection than the first.

Third position: For the third position I chose the card Brownie (level 4).
Brownie is a card that I like a lot because it has two very good abilities and a very low mana cost (1). Thanks to the Inspire ability, all my melee cards get an additional attack point.

Fifth position: In fifth position I have deployed Screeching Vulture (level 6).
It has three abilities: Flyng, Scavenger and Opportunity.
A very useful card that I use a lot.
It only costs 3 mana and thanks to the Scavenger ability it gets an extra life point every time a friend or opponent card is eliminated.

As a summoner, I chose Daria Dragonscale (level 4) who, thanks to her ability, allows me to increase the attack of my melee cards by one point.

Generally for the Share Your Battle contest I choose balanced battles and in fact in this battle there is an initial balance:

During Round 1 no cards are eliminated, although at the beginning of Round 2 I lose my first card: Khmer Princess. 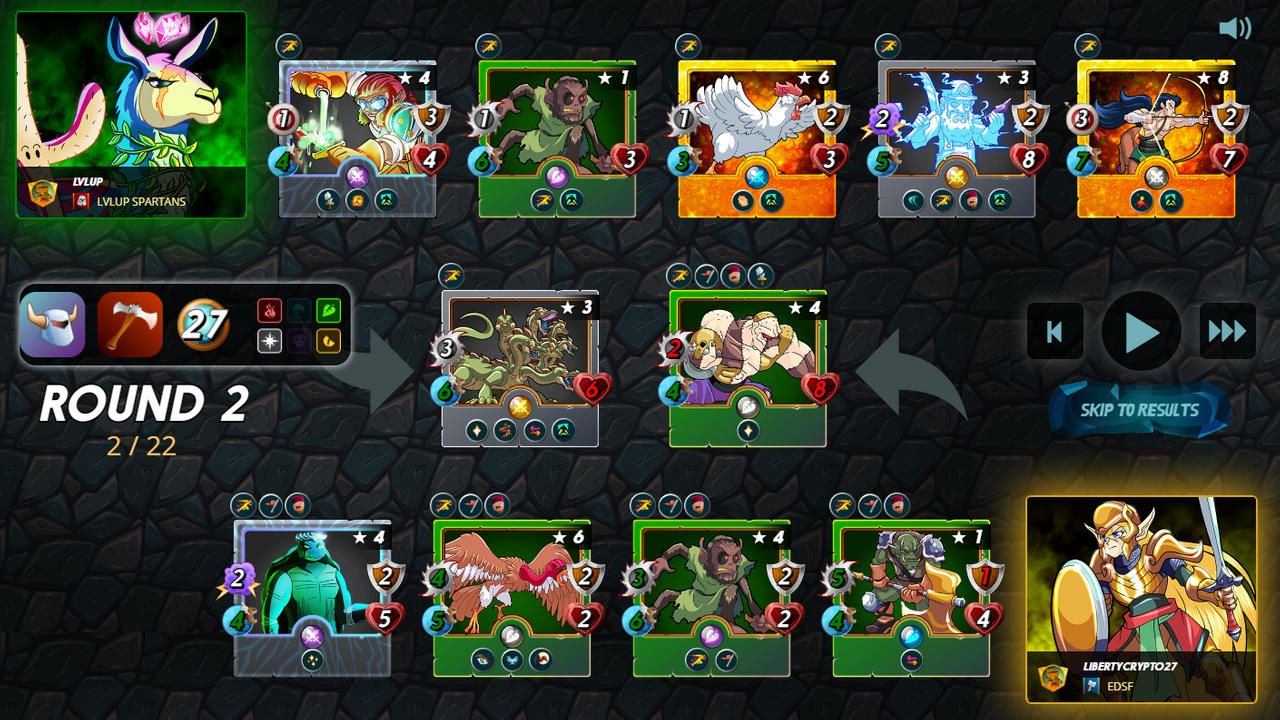 During Round 2 my opponent loses his first card and his Brownie. 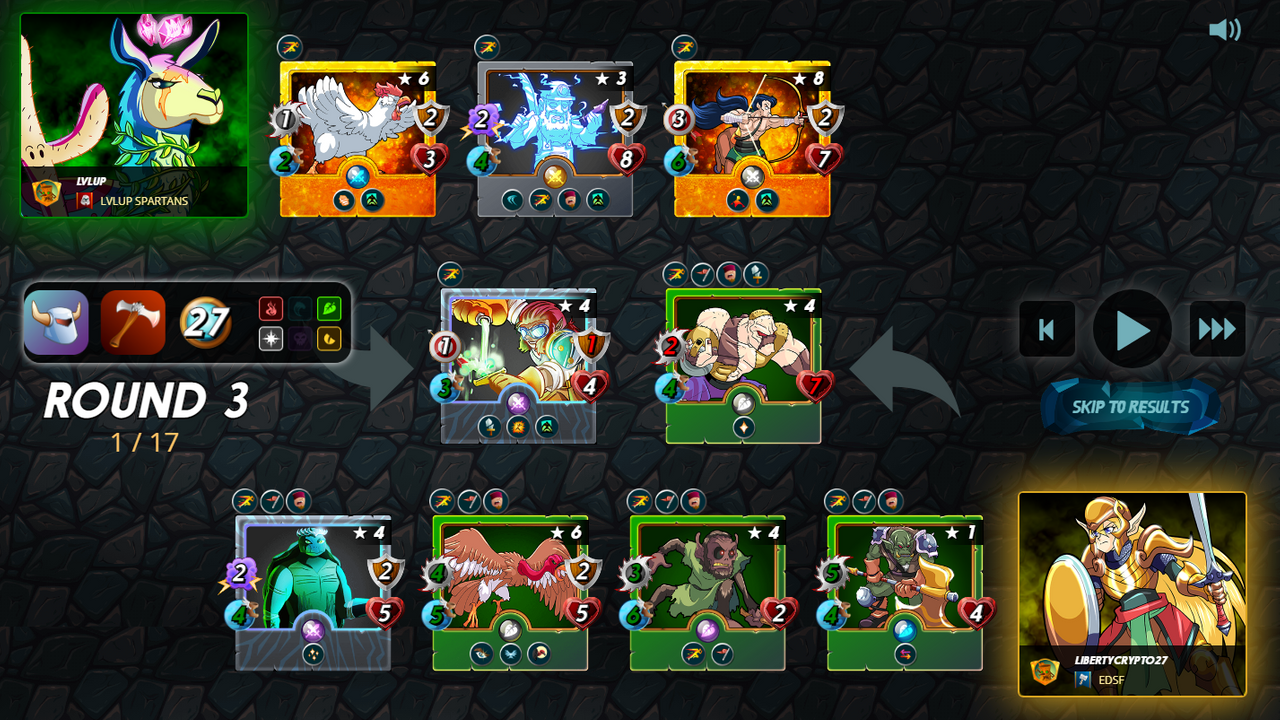 By now my advantage is big and the battle ends on the 4th turn of Round 6 with my victory. 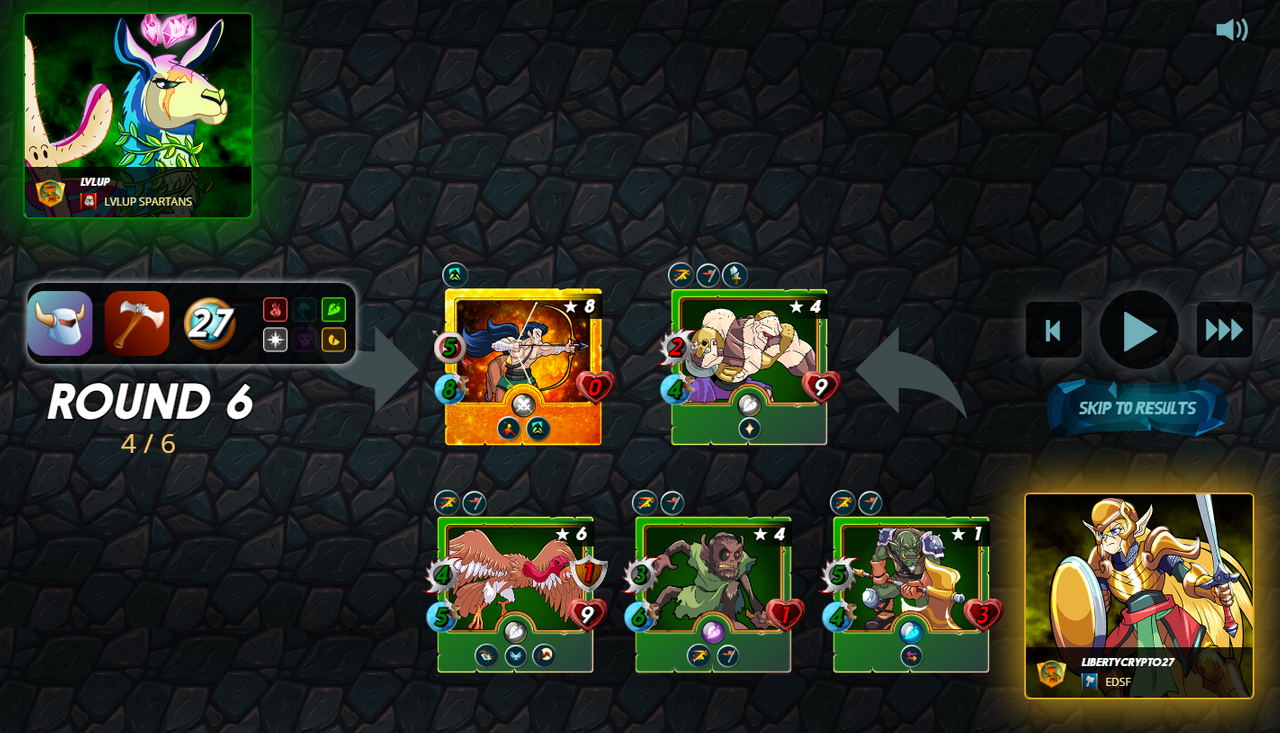 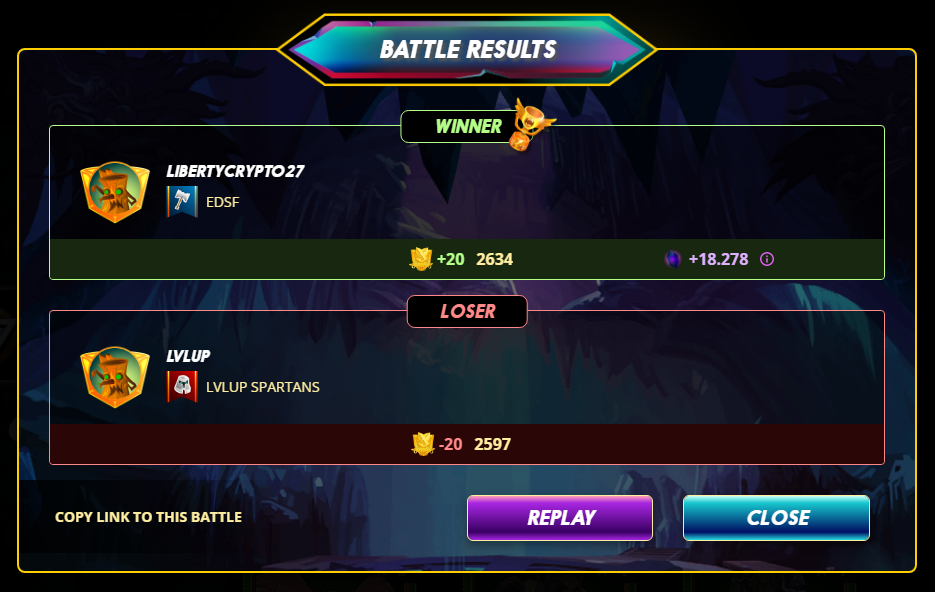 Stonesplitter Orc is a card that has good abilities but it's a card that can't be used all the time and is only useful in battles that have specific combat rules.

In my opinion, there are three main rules of battle that are favorable to using the Stonesplitter Orc card in battle:

The situation is even more favourable for Stonesplitter Orc if one of the three rules listed above is also combined with one of the following battle rules:

Not a Splinterlands player?

If you are not a Splinterlands player, you are missing out on a unique opportunity to have fun while earning cards and DECs (Splinterlands NFT).

If you decide to register, you can do so from this link:
.
https://splinterlands.com?ref=libertycrypto27
.
Of course if you'd like to use my refferal link... :)
If you use a refferal link when registering for Splinterlands you have the following advantage::

Splinterlands is a beautiful game but it is above all a good investment (this is not a financial advice but just my personal opinion) especially if you regularly participate in the weekly contests organized by the @splinterlands account.
If you liked my post leave a comment, an upvote or do a reblog.
See you on the Splinterlands battlefields.
Unless otherwise indicated, the images in this post are screenshots taken from the sites:
https://splinterlands.com/
https://peakmonsters.com/
The images containing calculations and tables are my property
.