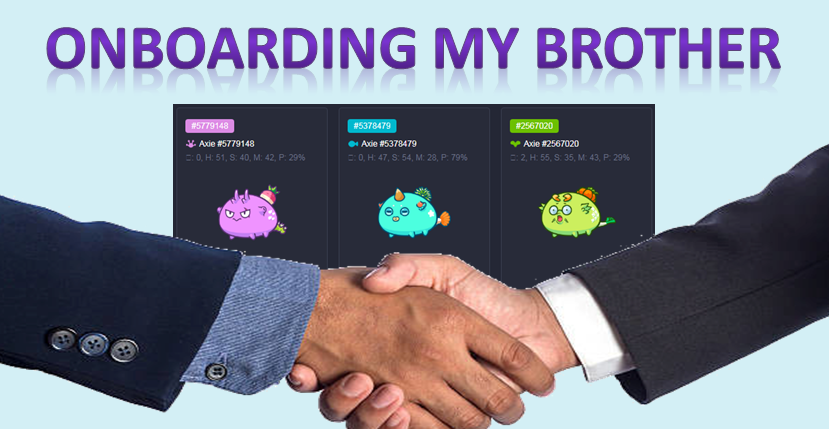 Onboarding My Brother to Axie Infinity

I have started playing Axie Infinity for months already. 5 months to be exact. But you might be shocked to know that none of my family members and relatives know about anything crypto. But just recently, blockchain games are steadily increasing in presence here in the Philippines. The biggest sign of this for me was that even my older cousins who rarely play games are curious about Axie Infinity.

Now for a background story. When I was just new to the crypto-world, I kept on telling my brother that “blockchain is the new frontier”. Furthermore, I was looking for opportunities to join Axie as a scholar at that time. My brother never understood Play-to-Earn games like Axie Infinity as well as blokchain games so he kept on ignoring my words. Only after 4 months did my brother actually got the interest to join the game! And so, I helped him join in the world of Axie!

It was hard. Explaining the basics right from the very start was tiring. I even had to explain how to use Discord. It was also important to explain ways to keep accounts secure all the time since scams are aplenty in the air. I also wanted my brother to join Hive, but it seems that his day job hinders in that aspect so I focused on teaching him about Axie Infinity. While he was saving up for an Axie team, I let my brother practice using my Axies. He lost a lot of matches. So I had to coach him some more. But that was not enough it seems.

The team that I first made for my brother was a Plant-Aqua-Beast team. When I was just starting playing as a scholar, I had the same team composition. I felt that it was balanced and easy to use. These are the Axies that I picked. 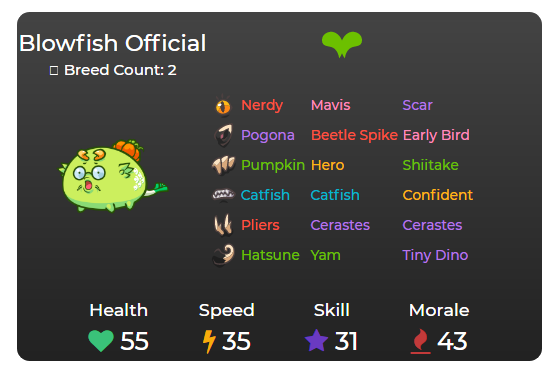 First things first, I was working at a budget of 200$ per Axie at this time. So I did not look for pure Axies at this time. But as always, I had to make sure that the Axies that I picked was PVP-capable. For a tank, high shields are important. So picked this one for the Hatsune and Pumpkin. Aside from this, it has catfish which helps keep this tank survive longer. Pliers is the cherry on top of the cake. It deals tons of damage against shielded target! 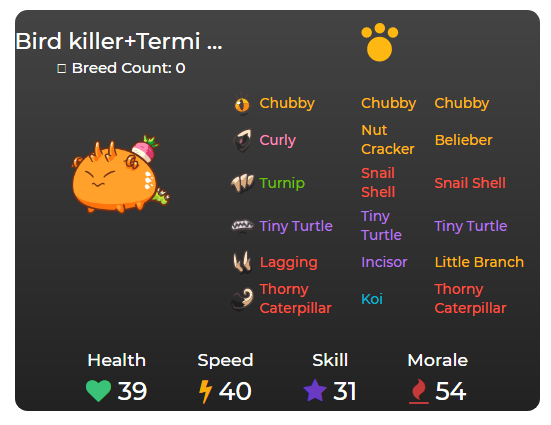 This Axie was chosen by my brother since I felt that it has a great capability to defeat Bird Axies quickly. Plus, it is capable of dealing slows and stuns just like a Terminator Axie. Since my brother has practiced on my Reptile Axie: Mr. Suave, I knew that my brother knew how to use slows to the change the tide of the battle. Unfortunately, I overestimated my brother. We had to replace this Axie with something more durable but with the same card set. 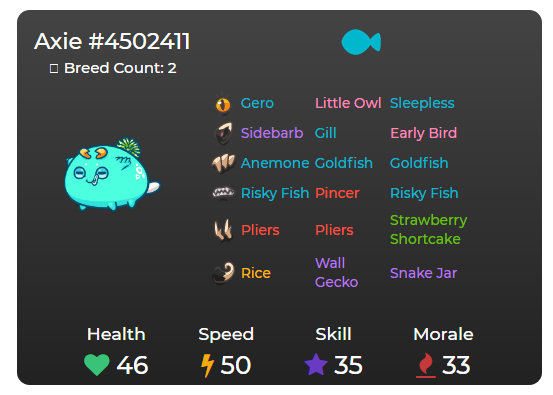 This was an Axie that I chose due to how it closely resembles my previous scholarship Aqua Axie. It has Rice for energy manipulation, risky fish for high damage and buff, and anemone for the heals. But most importantly, it has Pliers! My previous scholarship Axie had Rose Bud which deals no damage but heals a lot. But once again, my brother was not able to make full use of this Axie.

My brother had a hard time using the team. I tried coaching him but it seems that he was not able to make it work as I had intended. His rank kept decreasing until it reached 900 MMR!

These were how my brother felt using the previous Axies:

So I had to remedy this by searching Axies with the following skills: Nimo for the Aqua Axie; Reptile Axie instead of Beast Axie. These are the replacements that were made: This Aqua Axie now has Nimo for its tail for more more energy gains instead of energy steals. The mouth and horn were replaced with Beech and Lam due to their higher shields(10 more shields) that previous skills. Furthermore, this Aqua Axie is 4 more speed compared to before! Unfortunately, it now lacks damage to Plants, Reptiles and Dusk Axies. 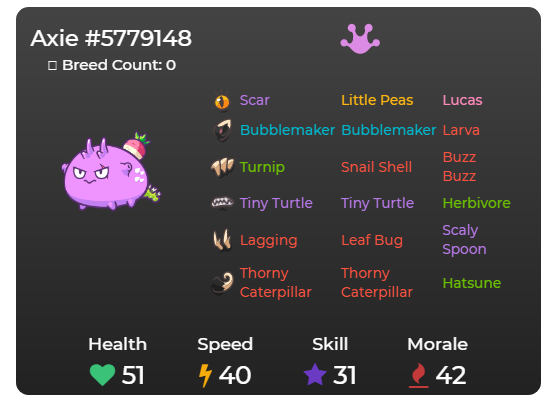 Now we have a Reptile with the same card set as the previous Beast Axie! It has higher HP plus, it can survive better against Aqua Axies which proliferate in the lower MMR. I wanted to find a better card set for the reptile but it seems that my brother loved the skills and got used to it. He said that the only problem with the previous Axies was that they die to easily and lacks durability. Now, it seems that his MMR has improved! Sadly, it seems that my brother is not that good with mind games but now sits at 1200+ MMR.

After seeing the results of my brother's MMR, I has to admit that I was wrong. I kept on pushing my ideals to my brother on which Axies should be picked and what to do. But there is a big difference between the two of us. Maybe it was my pride that kept me from asking from his input as well. Since I was earlier that my brother in joining the crypto space, I felt that my brother was a total noob(which he still is) and kept on pushing what I think is right. So for now, I will try to guide him but reduce my infuence so that he could grow on his own.