First Time Breeding My Axies: Too Much Expectations || Axie Infinity

First Time Breeding My Axies: Too Much Expectations

Breeding Axies is luck based. Breeding non pure Axies with differing recessive genes, even more luck based. Furthermore, my luck in games is not that amazing{RNGesus please bless me). The result? I got an Axie that I did not like at all. The offspring has “OK” cards and parts. It only one Zero(0) energy card, which is good. But, I expected too much.

As this was the first time for me to breed an Axie, I was very excited and wished for great success. But from my past experience of playing gacha games, my luck is so-so. Which means that I need to keep my expectations in check which unfortunately, I was not capable of at that time. Who knows, I might breed a Meta Axie right? I do not like gambling but I like gacha games. Moronic ain’t it? LOL. Axie Infinity is a GACHA game!

So I had these two Axies that I planned to breed, the Blue Demon and my Slow Kisser. These are the skills and genes of each of these Axie: 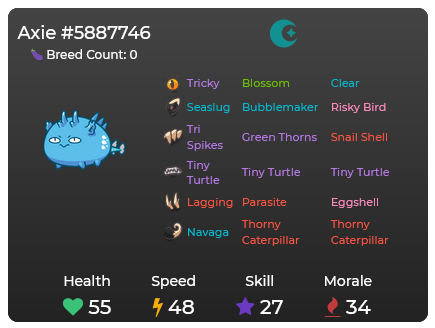 What I Was Expecting

Based on the percentage chance of parts to appear in the breeding calculator, the offspring has a high chance to get: Tiny Turtle mouth part; Lagging horn part; Tri-spike/Croc back part; and Thorny Caterpillar tail part. Plus, I was expecting the Axie to be a Dusk Axie. This would mean that the Axie could have been very durable with tons of damage and capable of jumping over the Tank. Aside from that, I was expecting an Axie that would roughly cost 300$ in the market! Not only is it powerful, it is also expensive! Sadly, my expectations were too high. And I quote Thanos, “Reality is often times disappointing.”. I knew what I was getting into when I purchased Axies that are 60-70% purity. I kept my expectations low at the start but as I was breeding, I could not help but feel expectant for the powerful Axie I was expecting. The results were out after 5 days. As you may have expected now, I was greatly disappointed. The Axie had the following parts: Axie Kiss mouth part; Lagging horn part; Snail Shell mouth part; Thorny Caterpillar tail part. You might be thinking, “Hold on, isn’t this Axie still be really good?”. To be honest, it is already lucky enough that I was able to breed a semi-termi Axie. It has slow debuff, high damage and a defensive stun. But as I have told you, I was expecting more than that. At the same time, in season 19 of the Arena – nerf is incoming. That is right, a lot of Axies will be “balanced” or nerfed. Furthermore, it seems that everyone thinks that aside from poison compositions/skills, termi skills will also be balanced.

With the massive pump in price of AXS, I could not help myself but “take profit” for now. Which means I have 0 AXS once again(This was a good move since price dropped to 120$ recently). So it got me thinking, should I breed once more? Maybe? I don’t really know to be honest. Price of AXS has soared. As Newton has said, “What goes up must come down.”. This means that I should wait patiently till AXS or breeding fees go down some more! But no one knows the future. I don’t really know how to make an analysis of crypto market as well. But still, I am hoping that AXS go down(to the ground if possible XD). For now, I might purchase another AXS to breed another time for future breeding. Breeding will cost me around 150$ which means that buying an Axie might be more worthwhile as well. Currently, Axies are at 150$ lowest price as well so it might still be a good chance to purchase some more Axies.