Datura, moonflower, thorn apple, or jimsonweed, and a few other names are common names for the plant genus Datura, which contains quite a few species; all nightshades (members of the family Solanaceae, along with tomatoes and tobacco) that bloom at night and have similar medicinal properties between them.

Datura, like many nightshades, is very toxic in certain consumption methods. When eaten, the seeds are reported to induce the most terrifying disassociative hallucinations of any drug. It contains many compounds of medical significance; including Scopolamine, an anti-nausea medicine, and atropine, an anticholinergic agent (it blocks the effects of some poisons and nerve agents (source)). Of course, like anything, those aren't the only uses for those compounds. They belong to a group of chemicals called tropane alkaloids, which has something to do with the chemical makeup of the molecules. I won't pretend to know anything but the word on that topic. Supposedly cocaine is in the same group though. 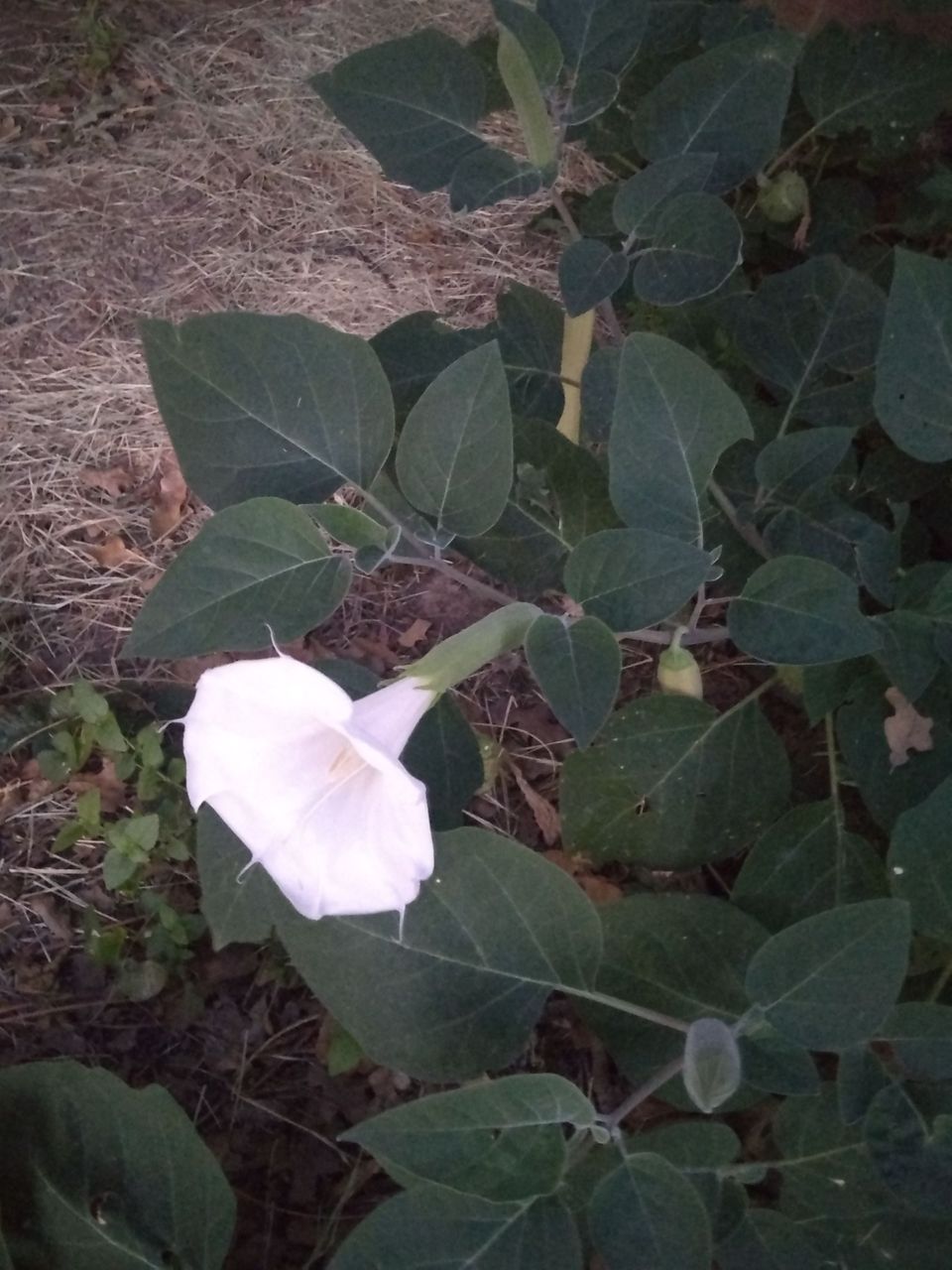 In my own life, thorn apple is used in a smoking blend. I'll be honest, I first heard about it in the TV rendition of Outlander, where the main character, Claire, used it to help with respiratory difficulties. I didn't think much of it til my seasonal asthma kicked back up, exacerbated by having to wear a damn mask at work. I got on my yearly inhaler and was using it at a frequency of two puffs, twice daily. Unsatisfied as always with the tie to big pharma and their industrial medicine, I looked into other things and saw thorn apple mentioned again.

On my own natural medicine journey, I tend to wait until things are providentially presented to me. I learn and read and keep an open eye for things, so when God makes them available, I'm ready to act on His gifts. Shortly after learning about jimsonweed, I noticed some as a landscape feature on the square in Denton, Texas. I trimmed a handful of leaves and a couple seed pods and set it all to dry on my dresser. This was last summer when we were living with my parents while rebuilding our house.

After drying on my dresser, I loaded up a bowl in my cob pipe and kept it handy. Man, I tell you what. Two puffs twice weekly replaced my two puffs twice daily inhaler. My mix is about 30% mullein, 70% datura innoxia. Mullein is another lung healer, used for a long time by people with tuberculosis, pneumonia, asthma, bronchitis, etc. I have plenty of it available from harvesting some on a hunting trip with my dad.

This year, I planted some of the seeds that I saved from the square, and grew three plants that germinated. I now have probably enough datura for my whole town if they need it! Not that I'll harvest that much, that'd be far too much for me to ever use or market to friends. I do now have some for sale to my local communities though. For $20, I have as much of the blend as I've used in a year (not a whole lot), along with ten seeds for folks to grow their own next year. I'm a part of little pharma and slow food, which means I don't want repeat customers. It's a terrible business model really. I'll never be a billionaire from it, but the people around me will be autonomous and healthy, so there's that. Some things matter. 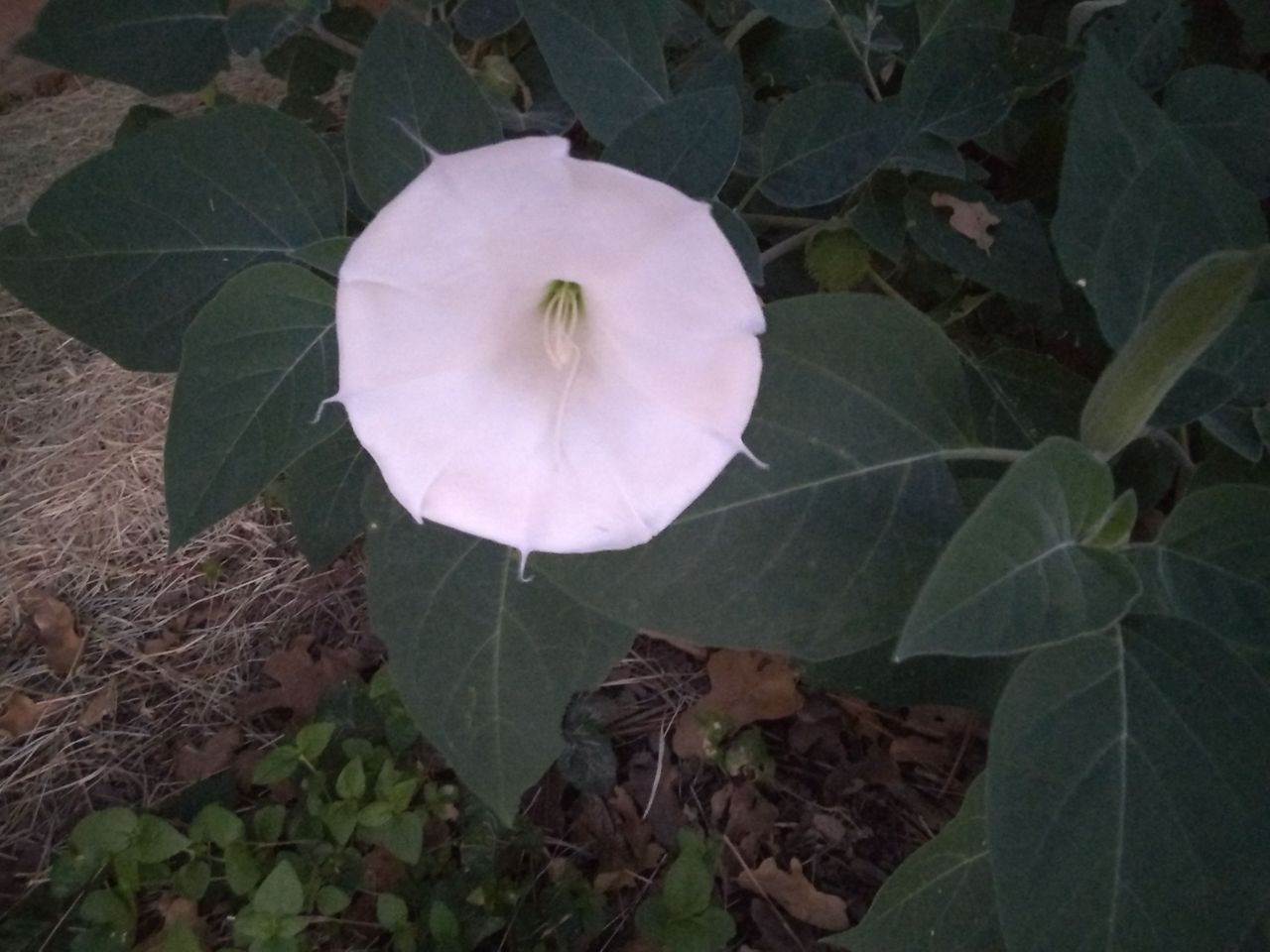 Being a nightshade, there is a possibility of overdose, but at the mentioned dosage, I've never had any side effects. When harvesting though, I did have what I've deduced was a side effect of scopolamine exposure. When I got to work about half an hour after harvest, my left eye went blurry. Upon inspection, my left pupil was very dilated. It wasn't uncomfortable, and the blurriness was just from the halo on all the bright lights at work. It lasted a couple of days and then subsided. I am a person that checks my pulse regularly, and I never noticed any change in my pulse throughout that time. I'm suspecting scopolamine because it is often given in a clinical setting via transdermal patch rather than injection or ingestion (source). Turns out dilated pupils are a common side effect of tropane alkaloids. Now you know.

As for any hallucinogenic effects, like I said, I've experienced nothing of the sort from this plant at the dosage I've worked with. I don't intend to push this one to see where that threshold is, because that is not an experience I think I need in my life right now. I also don't intend to smoke it til my eyes dilate, and I'll be washing my hands diligently after working with the fresh leaf matter.

As a parting note, now that I think of it, I haven't had a hint of asthma this season. That makes me curious if it actually helped rid me of my asthma altogether... Time will tell I suppose.