How to Exode: Deck Building

This is intended to be part of a series of articles discussing the upcoming game Exode. Exode is a blockchain based space colonization game currently being developed. Considering it's a one man team, progress is going fairly fast. There is a playable alpha of the first phase, Evacuation, and scanning / colonization gameplay will be coming soon!

You can learn more about the game at the official webpage as well as reading the developers hive blog.

I will fully discuss the game in another article, for now I wanted to share a quick Deck Building Guide. This is focused on exposing people to various cards and showing the deck building interface. The game is very complex so you will need to puzzle out proper synergies and strategies on your own.

If you haven’t already read my Evacuation article, you can find it here. That article discusses the basics of evacuation gameplay and may help understand what a good deck needs. In my Evacuation article I discuss getting started using the older demo version. To launch a real evacuation the steps are slightly different. Here is a brief summary: The biggest decision when building a deck is selecting an origin. This is choosing your character and is the main thing which determines what cards you can use in your deck. If you bought the starter bundle, you will have the following three choices:

Each of the starter origins grants a synergy bonus to same faction cards as well as bonuses to two specific skills. The alpha set origins, only available in boosters, each have different benefits and once you understand the game better you should find the one which works best for you.

Once you have selected your origin, each slot in the deck builder will be filtered to cards allowed by your faction. In general this will be any card which shares your faction and “versatile” cards. Your origin also determines how many officers you can have. With the exception of the Legendary Origin Repentant Pirate which allows four, each origin allows for three officers. There are currently 16 different ships divided among the categories. Each ship has different equipment / modules which may help during future gameplay. What matters most during alpha is the origin, crew, equipment slots, cargo, and passengers.

Each ship also has different speed and toughness values, but those numbers are currently hidden from users. Choose a ship which best reflects the crew you want to take. This will then adjust the number of cargo, crew, and passenger slots available in the deck builder. Each ship has a certain amount of equipment slots. You can use them for weapons and armor which will then be available for your crew to equip during evacuation and later gameplay. There are also items which modify the ship and grant rewards during colonization. As you cannot collect equipment during gameplay it is good to take something with you, even if you don’t expect to need it. It could surprise you once colonization gameplay begins. 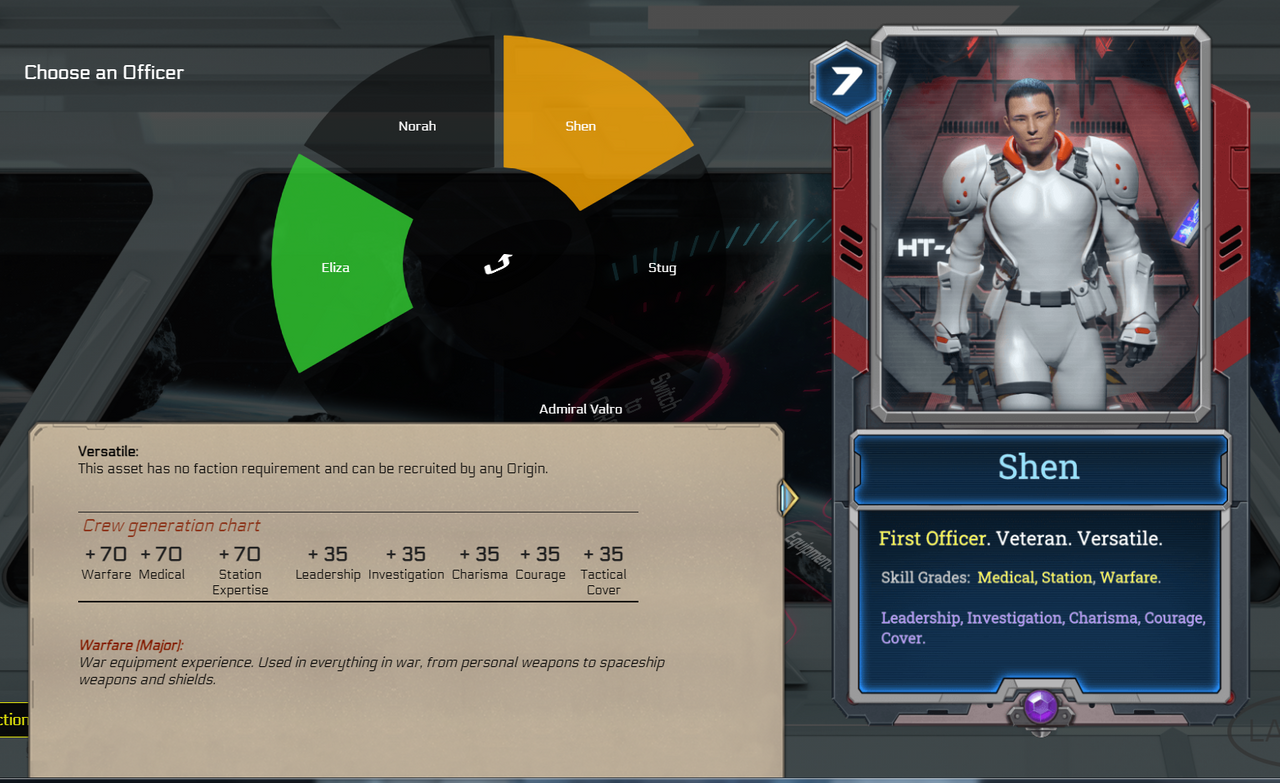 Typically you will be able to select three officers. Ships and Origins can modify this number. These are usually your most skilled crew members. As you select each you will see a display with their base skill modifiers. You can scroll down using your mouse button to see the descriptions of any skills or abilities. You may notice that not all officers have the same information in their display. This is simply a side effect of the game being in alpha. The number of crew members you can select is determined by your ship. Aside from that, the interface is the same as selecting officers. You will notice that crew members typically have lower and fewer skills than officers. When selecting your crew, it is vitally important that you choose someone with Cybernetics and Mechanics who is capable of upgrading your hyperdrive. It is also useful having someone who can fly your ship otherwise landing may be difficult. Ultimately though your crew choice should reflect your desired playstyle. After selecting your cards you can give them starting equipment. In general for crew members this will be “faction changers”, Weapons, and Armor. You can also equip items to your origin and ship as well.

There are three faction changers which can be equipped to your origin. These will allow you to use cards from those origins

There is a single faction changer which can be equipped as equipment. The Genetician Console will turn your origin and entire crew into the Genetician faction.

There are two faction changers for your officers and crew. This will add the faction to the target card often allowing you to select someone you wouldn’t normally be able to.

There is one passenger, the Drachian Commissar, who will grant you "Drachian" faction slots as well. There are a handful of other factions as well so you can expect to see a very diverse universe in the future!

Most weapons are from the Rekatron Contract. This means the only way for new players to get them is through the market or trading. The military starter deck does come with the “FMR-17 ‘Atonis’ (x3)” which is also available in the alpha boosters. This card is equipped as equipment instead of a specific character and then any character can take them out and use them.

Unlike weapons, there are a lot of armor options available in the alpha boosters. They come in two types, suit sets and individual suits. The sets are equipped as equipment and can be equipped by anyone on the ship. Alternatively, the individual suits can be equipped on your character during deck building. I personally prefer to give everyone armor directly as they will start the evacuation wearing it, but there are numerous reasons to bring the equipment sets as well.

The equipment interface is fairly straight forward. You click on the target card, click equip, and then select from the available options. Be advised that each item will indicate what slot it is equipped to. It is safe to expect that some slots will be limited to a single item. A single character will not be able to take two rifles for instance. Once your crew is ready it's time to think about cargo. If you scroll over “Switch to Cargo” at the top of the screen, the display will change to “Load Cargo”. Clicking on that will bring up the Cargo screen. Depending on the ship this can be quite crowded and will likely be updated in the future. If you click on the button again it will return you to the crew select screen. This screen lets you specify Passengers, Cargo, and Escorts.

Your ship will determine how many passengers you can carry. These cannot be used during evacuation but will generate (possibly multiple) people after you land. It's entirely optional whether or not you load them in advance or rescue them during colonization.

Cargo is a critical decision for colonization. If you are poorly equipped you are unlikely to survive unless you find a perfect planet. It's such an important decision that I plan on writing an article dedicated to it. That being said, it also is an area with a lot of flexibility.

A lot of the cargo items you will find come from the TOM Contract.These items are often upgradable and can be “dropped” to the planet. Both upgrading and dropping burn copies permanently though. Cargo is also available in the alpha boosters. Many of these items are also upgradable and droppable, but there is a limited quantity of them compared to TOM items so the decision to use them is harder. There also is the option of gathering cargo during evacuation. There are a lot of items which are only available if you load them from the station, but loading cargo is a dangerous job. 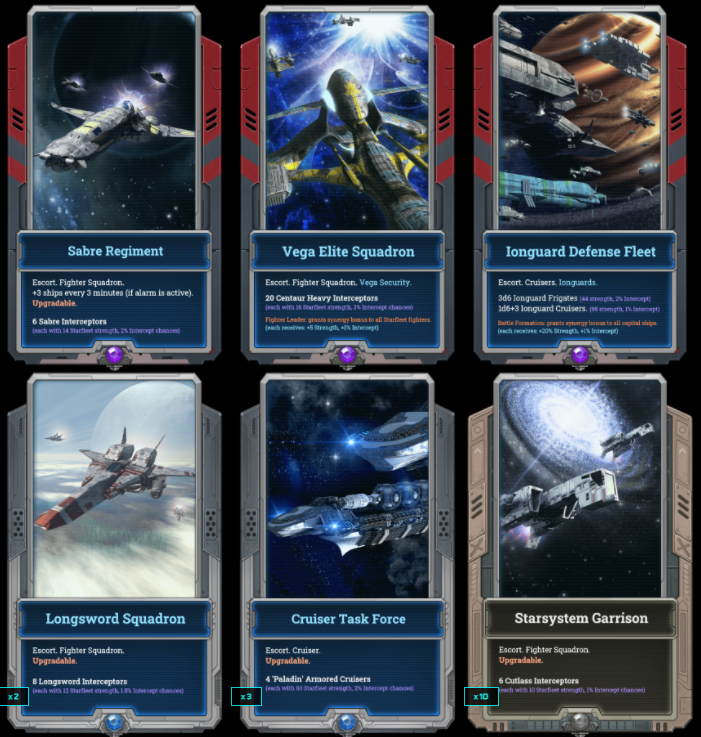 When the aliens start their attack there will hopefully be numerous ships defending the system. If there aren’t, you can use escorts to buy some time. Most of the escort ships were released in alpha boosters and you are likely to have several choices.

That covers the bulk of Deck Building. Thanks for taking the time to read this guide. You can view a sample deck building session here.

If you have any requests for the next feature I focus on please let me know in the comments. At the very least I want to do "Cargo Selection", “Crew Investigation”, “Planet Explanation”, and “Skill Cheat Sheet” articles

If, after reading this, you want to give Exode a try, please use my referral code! You only need a $10 starter (payable in Hive or Paypal) to start, or you can get on all three starters for $20. We will both get two free (account bound) booster packs if you do.