Welcome to the next Rabona Work Report! This time we want to update you with the recent updates to the game infrastructure, present the new V2 API and also a new Finances page in V2 interface.

In the last few weeks we were updating and migrating our infrastructure, bit by bit. This included many steps, like migrating the database to a completely new server, and also transferring services (like frontend apps, APIs, processors) to a new server as well.

Some users noticed drops in performance—especially pages taking much more time to load. We want to confirm that this was just a temporary issue, and now that the migration is over the performance should be much better, even better than before the migration started.

It was an important step in the development of Rabona, because any new features that we'd like to introduce to the game, and the increasing number of users will all lead to an increased load that the game has to handle. Now we will be able to more easily scale the available resources.

As part of the ongoing works on infrastructure & architecture of Rabona game, we have also been busy working on a brand new backend engine for the game.

Today we'd like to share with you great news, that we have implemented a new API service for the game—we call it API V2.

For our users this new API means that the app will be running much faster, as this API can sometimes be multiple times faster than the old one.

Going forward, we want to also encourage more tech savvy users to create their own Layer 2 solution to Rabona: useful tools and helpers, etc. But in order to do that, a good API documentation is required. We're happy to announce, that the new V2 API follows the OpenAPI guidelines. The documentation for it can be found under these two addresses:

Both documentations are kept up to date and provide the same information, they only differ in style and base on the same openapi.json file.

Keep in mind that the V2 API is still a work in progress. Only a handful of API endpoints are available at this point, but more are added all the time.

The last announcement that we want to do today is the addition of a brand new Finances page to the V2 Interface.

The page allows you to see financial outcome of your team in each season. There's also a nice chart which shows the overall financial performance in the last 30 seasons.

You can also view your current Advertisement Contract or sign a new one if you receive an offer. 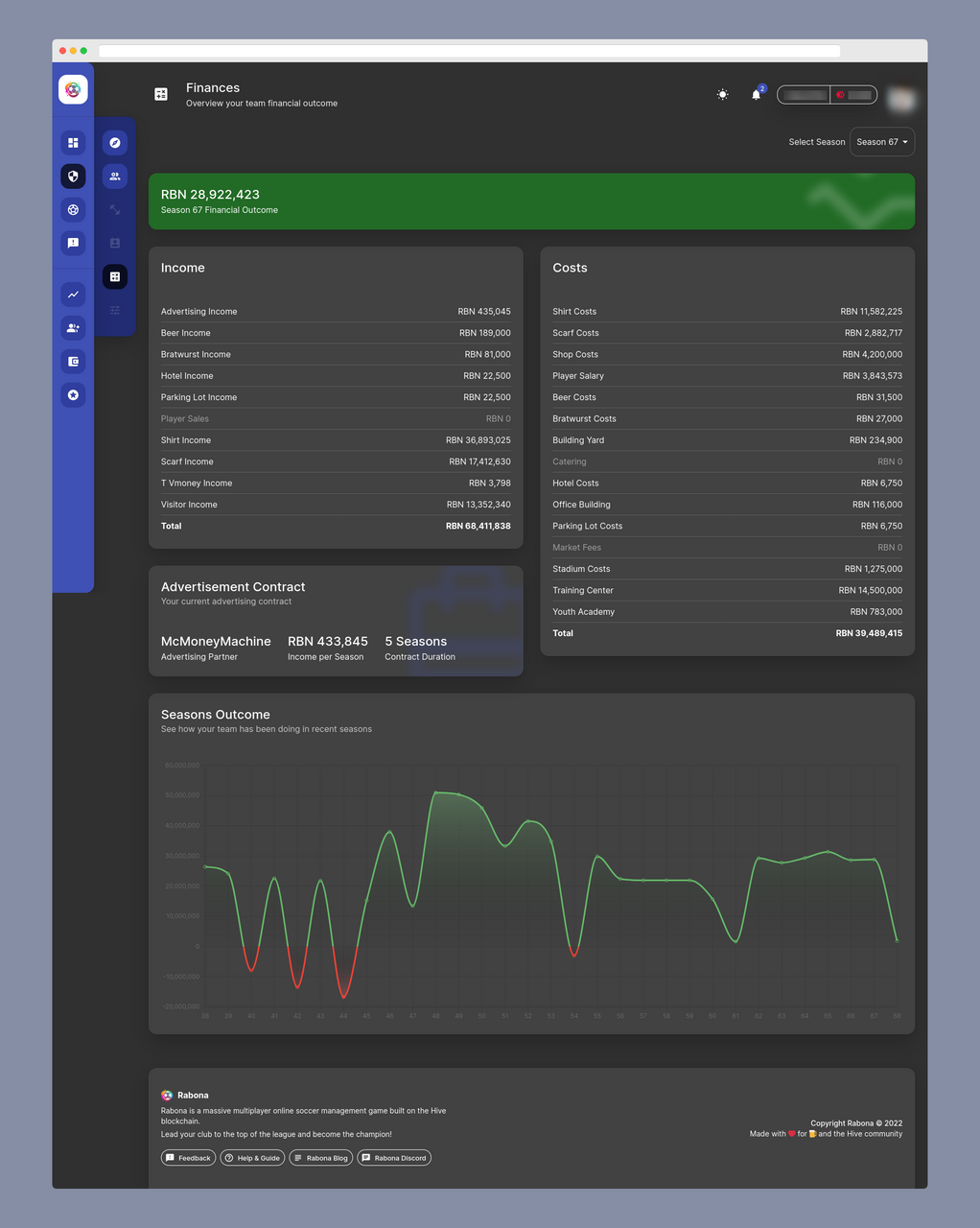 As outlined we are very happy to have the feedback board now and saw a lot great contributions from you guys already, thanks for that! The suggestions will keep us busy for the next 24 months at least. This really helps a lot to listen to the community feedback and take it into
account in roadmaps.