I Decided to go Back to Mars I've been to Mars before you know. I used to live on a colony there working towards terraforming the planet. But alas, I got Earthsick and returned here for a few years. Now that I have recovered, I have been yearning to return. Thanks to Elon Musk's advanced rockets, we can accurately and quickly reach the red planet now. This is the logo for the collective Martian colony, dubbed Citlali-1, which consists of 3 outposts relatively close to each other. What a view! Many colonists wake up to this vista, especially those who live in that spire, and receive a comfort boost. The next outpost is not very far away, which is good for trade. But the one in the rear is where it all started. (Further than that is a defunct Regolith quarry inhabited only by drones.)

Paradise-1, Home of the Founders After a healthy supply of concrete was procressed from the Martian Regolith quarry, and a source of water found by the first probe scans, the construction of a small round dome began. This dome, the first habitat ever built on Mars, was and intends to be the ideal paradise amongst the harsh Martian environment, or lack thereof. And so it was named Paradise-1[a]. A new drone hub was erected halfway between the dome and the well, along with a water tower, fuel refinery, generators, and solar panels, which have outlived the wind turbines.

Eventually a mini trigon dome was built on the far side of the orginal, aptly dubbed Paradise-1b. The twin domes are meant to be a utopia, fitted with everything one would need not only to survive, but to thrive! This perfect society is still a work in progress but right now it's equipped with apartments, a bar a gym, an infirmary, diners, a research center, a produce market, a theater, and a park.

Some brave colonists work in the 3 outdome buildings, the polymer factory, the fungal farm, and the fusion reactor. Not many people are qualified to work in the newer fusion reactor, which is only run at night. Actually, it's a Martian myth that an accident in the reactor, which may have almost caused a meltdown, caused a mutation to occur in the fungus grown in the adjacent farm. The farm had to stop production for 10 sols (Martian days) in order to isolate the gene in the new strain, though toxic, but more prolific. We thought we had enough reserves, but some people inevitably starved. Although the fungal farms produce more food now, there is a hydroponic tower garden in Paradise-1b which serves as a supplement to the colonial diet and as a backup in case such an incident should ever happen again. In the future, there will be a university built in Paradise-1a to prevent such incidents from ever happening again. When scans detected another subterranean aquifer near some ferrous and non-ferrous metal deposits, this became a new outpost. Mining Hub-1a, the spired dome, started out much like Paradise-1a, though missing certain luxuries. First it was just apartments and the metal mine a short distance away to keep the dust generated away from the dome.

Some research into the native Martian metal allowed my predecessors to learn how to properly manipulate it and turn it into valuable parts that Paradise-1 desperately needs. A machine parts factory was developed, which in turn required more workers and thus more housing. So the spire was constructed because it could hold many more people than an apartment building. One of the empty lots in Mining Hub-1a is reserved for the construction of a school.

To supplement the workforce, there was need for another satellite dome, and so Mining Hub-1b was born. It exploits a second metal deposit. Later, a Steven Hawking Institute was built. I used to be based out of there! Here we did work that was not possible with the equipment available at the Paradise-1's research station. When I arrived to Mining Hub-1b, the Hawking Institute was still operational. I worked there with other Scientists and we often collaborated with the hydroponics and fungal farm teams. Today, the institute is defunct. It is run down and falling apart from the lack of electronic parts. The few rare metals found in our mines go towards making electronics to keep the machine parts factory afloat.

Our last big collaboration was with the mines' geologists. They were getting some strange readings in a location near a Regolith deposit that was initially being scouted as a potentially closer and richer source of concrete. Well, they were wrong about the Regolith but right about the strange readings. Another outpost sprung up in just a few sols. Its directive:
extract rare metals like platinum, gold, even neodymium and exploit them to their fullest potential. I often find myself doing work in this outpost. Here, with the electronics factory we have developed a provably fair casino that runs on Web 4.0 blockchain technology! That blue skeleton of a building you see in between Mining Hub-2a and -2b is going to be a shuttle hub! It will take over and pretty much make our transport rover, Little Buddy, obsolete. Little Buddy is enormous! The entire colony owe their livelihood to this beast. He transports a lot of machine parts and electronics back and forth from the mining hubs and makes polymer runs from Paradise-1. All the concrete needed for the habitats was also carried by him.

Meanwhile, during this time of planned obsolescence, we're hard at work researching an alternate form of propulsion technology. The rocket fuel is made in the refinery using water from the aquifer. We've been burning the excess in a very dirty way to warm up the planet and thicken its atmosphere. Then it hit me. CO2 propulsion! First test flights have gone smoothly! The next phase will test flying with cargo. This could revolutionize our trade system and with Mining Hub-2 verging on the singularity, we will be able to expand to new horizons. We have found a suitable location for a full base, not just a mere outpost. The site sits in between 2 Regotlith deposits necessary for the initial construction projects, a source of water, and plentiful metals both rare and non-rare! This dome will have more ample room and is unofficially being called Paradise-2. 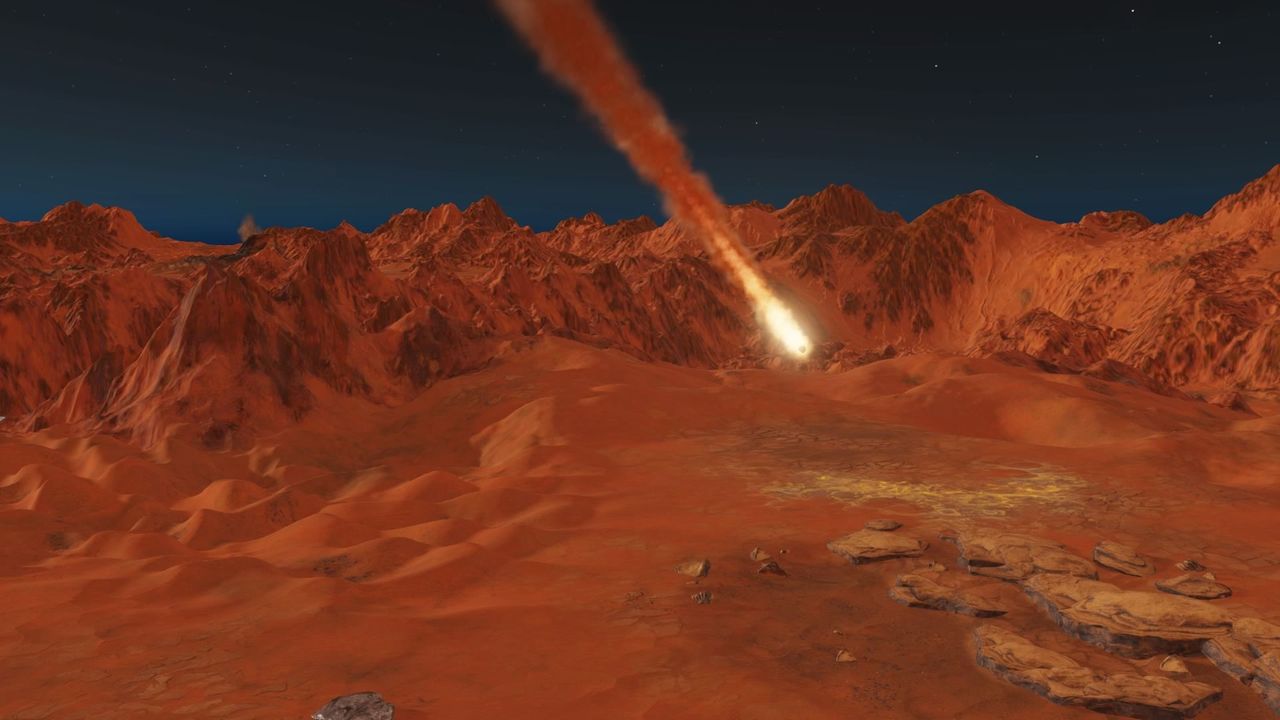 The site is thought to be an ancient crater, which would explain the metal deposits. There will be many research opportunities. In the near future, electronics and machine parts production should really increase. Perhaps the Hawking Institute will even re-open and get refurbished.