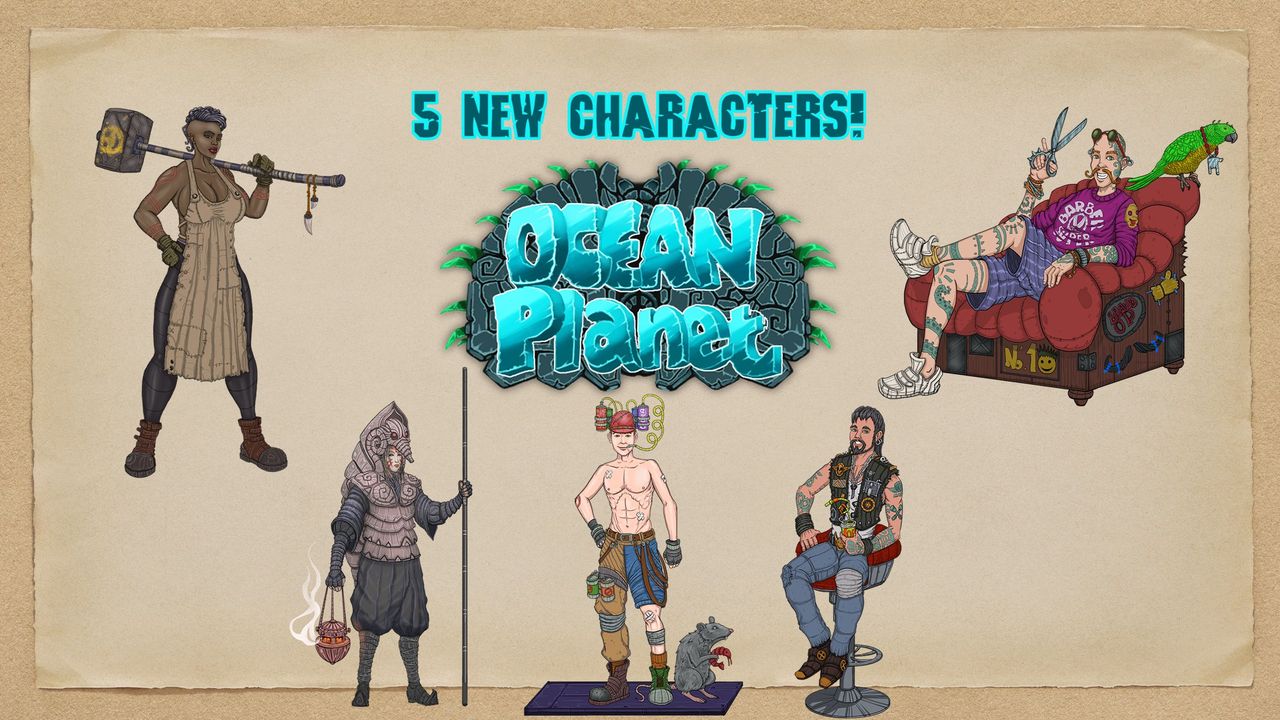 In update 1.4.0 we added new locations (you can read descriptions in the previous post) and you will find 5 new characters there: Sari, Dollar, Vincenzo, Max, and Kenneth. They will help you in your adventures and quests. Let's take a closer look at their history and learn more about their hobbies, preferences, and goals. 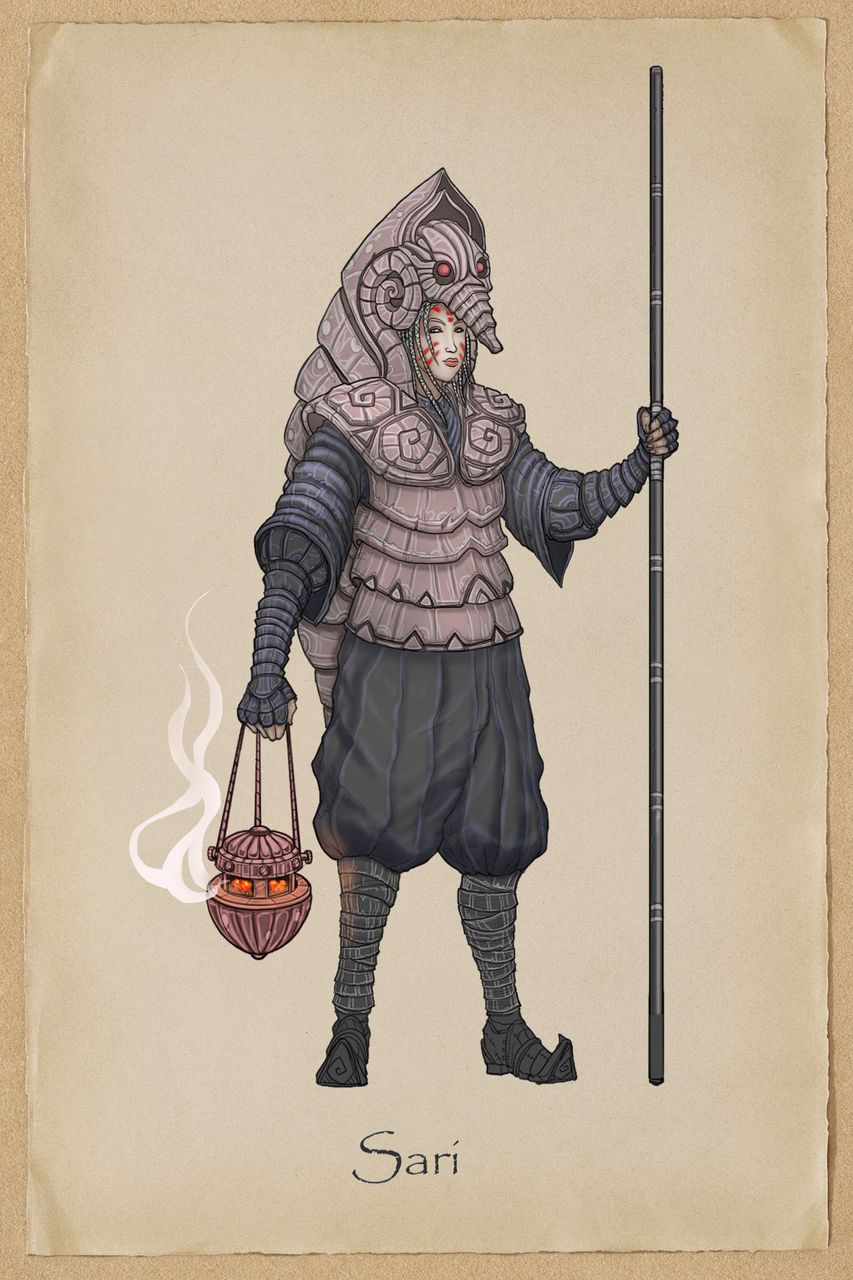 Priestess, chief shaman, and founder of the Holy Shrimp cult. According to believers, she talks to shrimps and they share the wisdom of the Holy Shrimp with her. Heretics believe that she has just invented a shrimp language and is fooling everyone. Sari’s not telling anyone the story of her life, but residents have noticed that every full moon she disappears for a few days and returns as if nothing happened.

Sari's goal is to gather a large number of followers for the cult and spread it throughout the new world. The more Players invite people, the more blessings Sari is giving in return. The statue of the Holy Shrimp was built by Sari and the first followers. Whether you believe in the Holy Shrimp or not, the Temple is the place where the main generator of electricity is located, it supplies the whole city with light and electricity, which is why Sari accepts donations only in the form of fuel for the generator. 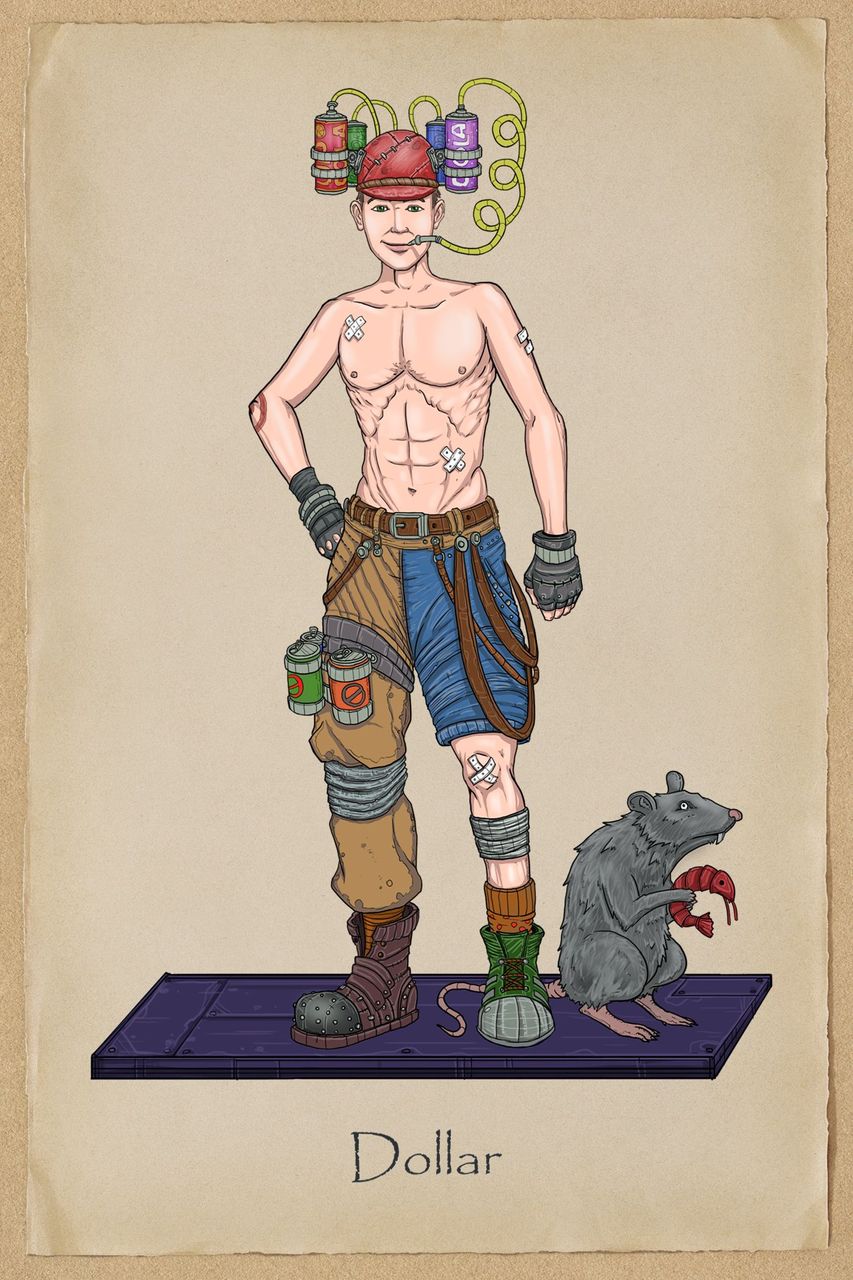 Even junkyards have their own managers who control the sorting and recycling of garbage. Garbage collector Dollar is holding this position in Glory Waters. He lives in the Junkyard in an old truck, which he has modified into a garbage recycling point where he saves every piece of junk and always finds a way to use it. Dollar is an orphan and has never seen his parents. Butcher found him as a child and invited him into the family of Glory Waters. Dollar's friends are hand rats who help him collect different garbage. He is responsible for recycling garbage into useful resources and can turn it into soil or fuel which are quite useful in a world, where all resources are in deficit. 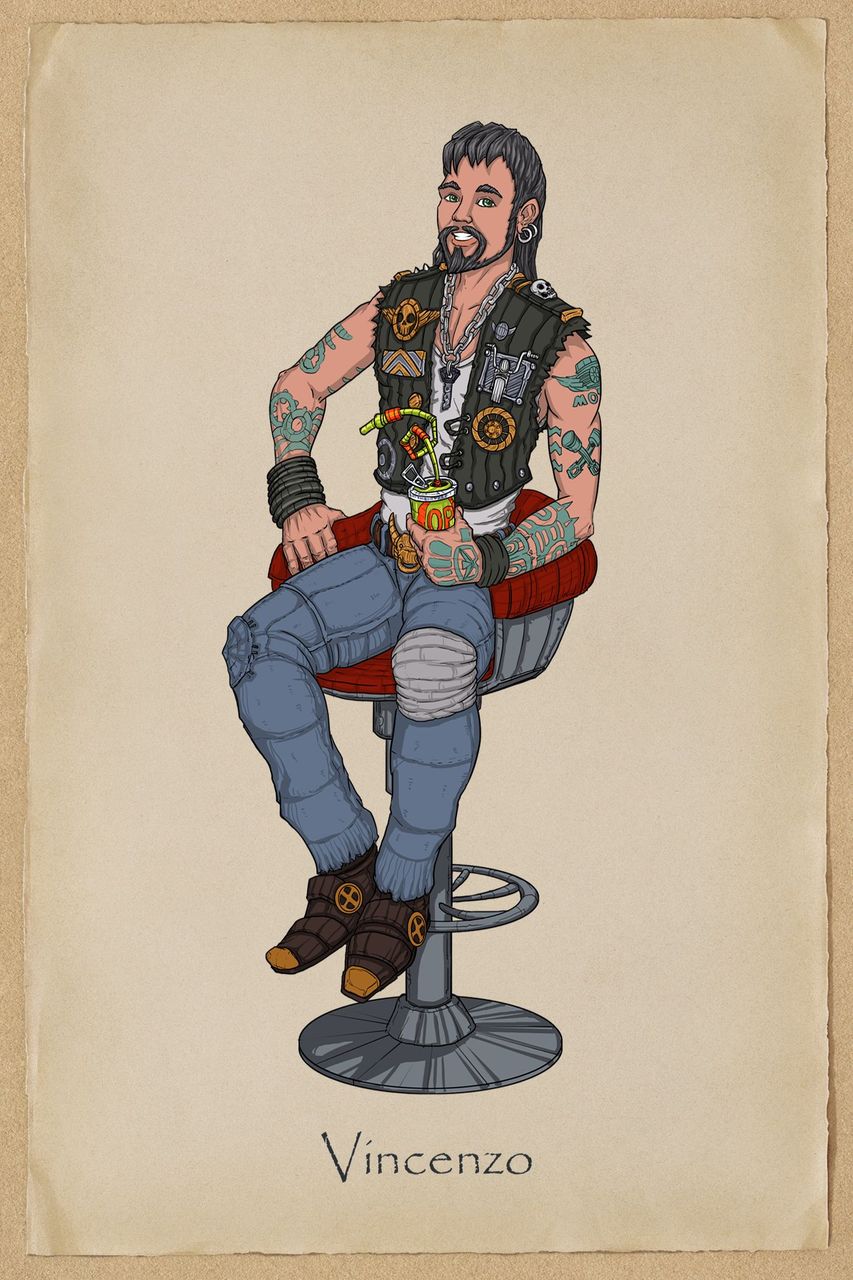 Vincenzo has a dramatic story behind him: in the ruining world before the apocalypse, his father was a biker who died in a fight against the raiders. Many years after that tragedy, Vincenzo still carries a lighter that his father gave to him and he believes that one day he will find his father's sunken Harley. Even though he has many friends in Glory Waters he doesn’t want to tell his story to anyone. Vincenzo is known for his friendliness and he is always happy to offer a beer to any visitor of the hotel. Vincenzo has organized a collaboration with foreign breweries, so the Player can always buy a high quality beer at the bar. 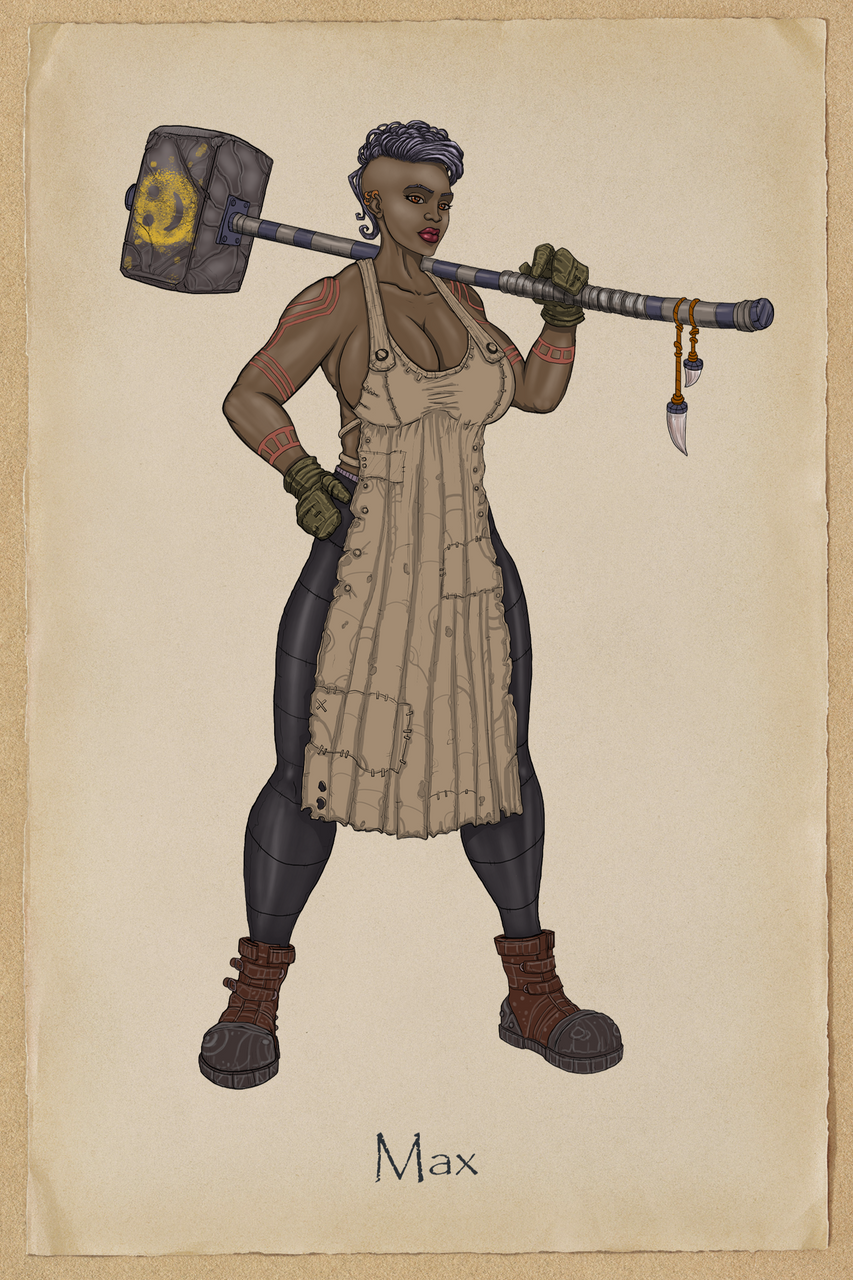 Max is a strong and big woman with a huge hammer. She grew up in a family of blacksmiths, where secrets of blacksmithing and the metal processing have been passed down since pre-apocalyptic times. Max's hands are covered with tattoos that symbolizes the power of metal and fire. Tattoos are a traditional symbolism of blacksmiths’s guild, whose representatives are scattered around the cities of the Ocean Planet. Unfortunately, all of Max's brotherhood moved to other cities to help people, so she’s the only one who remained in Glory Waters. Despite strong hands and a heavy hammer on her shoulders, Max is very friendly and helps Players to open lootboxes or to craft desired details. Also she gives the go-by to all the attention that Spike places on her. 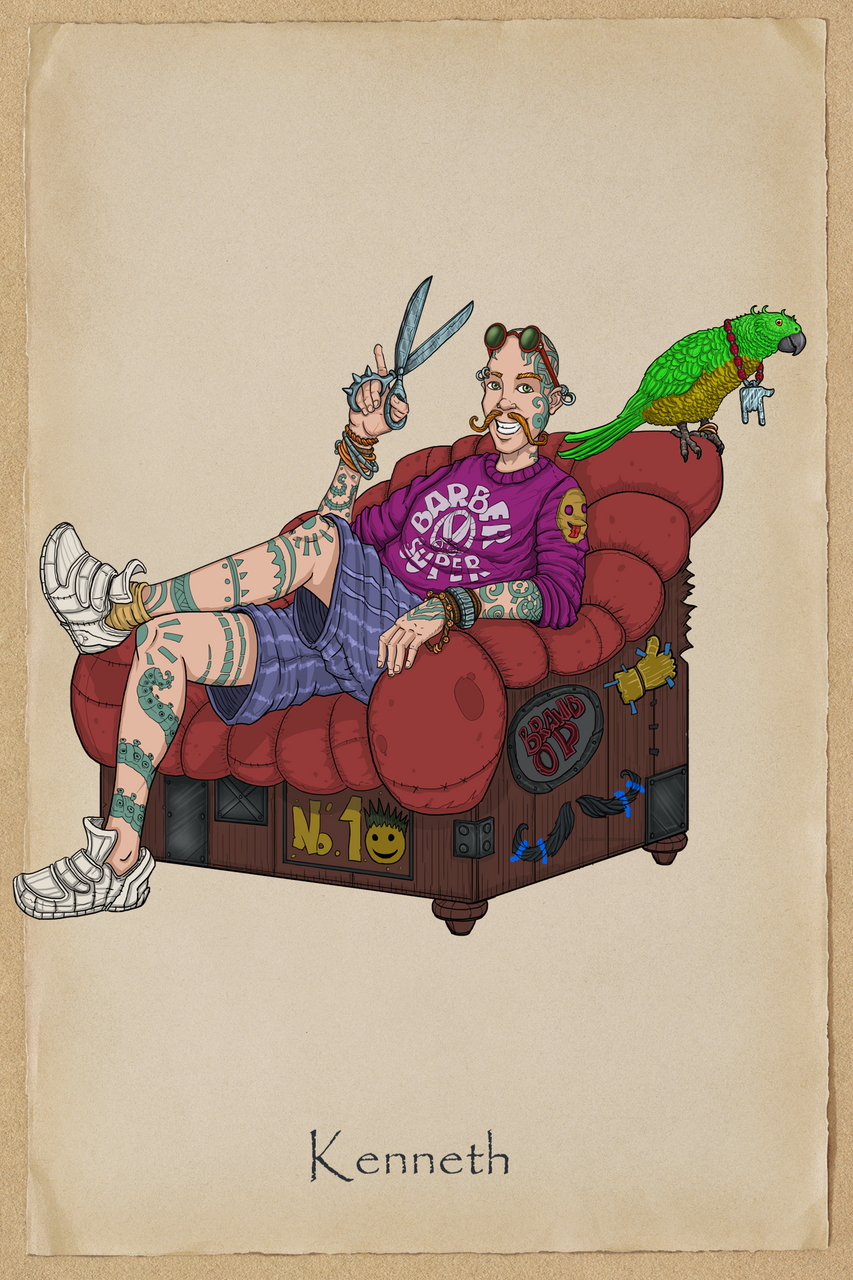 Cheerful and bright young man who always smiles and likes good jokes. Kenneth's entire body is covered with different tattoos, most of which he did by himself. You can always see his best friend on his shoulder - Rocky the parrot, who loves singing different rock songs and teases guests about their haircuts. Moreover, Kenneth has a large wardrobe with various clothes, equipment and jewelry.

The story of this young man is quite simple - he is a child of the post-apocalyptic world and has never seen the old world, he belongs to a generation of people, who have adapted to the new world and have never suffered from emotional loss. He and his parents have sat pretty well in the new world and they often help others in need. Kenneth is a pacifist: he’s against the war with the raiders and judges Klaus's policies. He believes that the conflict can be resolved only diplomatically, however he still has no plan how to actualize his visions.

You will know about the story of other characters in future posts!