The Game With Immense Potential | Escape From Tarkov

Tarkov, a game loved by many, a game that is hated by all. Okay that's not true, the love for this game is crazy but the feelings while playing or after dying says another story. Escape From Tarkov is a hyper-realistic FPS survival game set in the Apocalyptic Russia era. Some of you may think this is just another shooter game like CoD or Battlefield, let me stop you right there and showcase to you some of the most in-depth and insane mechanics that separate this game from the rest. Tarkov suits to many different varieties of players based on what you enjoy in games. For the gear-fear guys, you can loot around the maps and run to extracts and leave. For the Chads, there are hotspots in the map where high-tier loot is and many times, players. For the goal achievers, there are quests to be done ranging from kills, S&R, and survival challenges that will eventually lead to god-tier items to buy/acquire.

Each time you go into a raid, you are tasked with internal and external challenges to go against, hunger and thirst, time limits and other players out to kill, as well as being too greedy when looting. Here's a map to show how big the map can be and the diverse landmarks to check out. 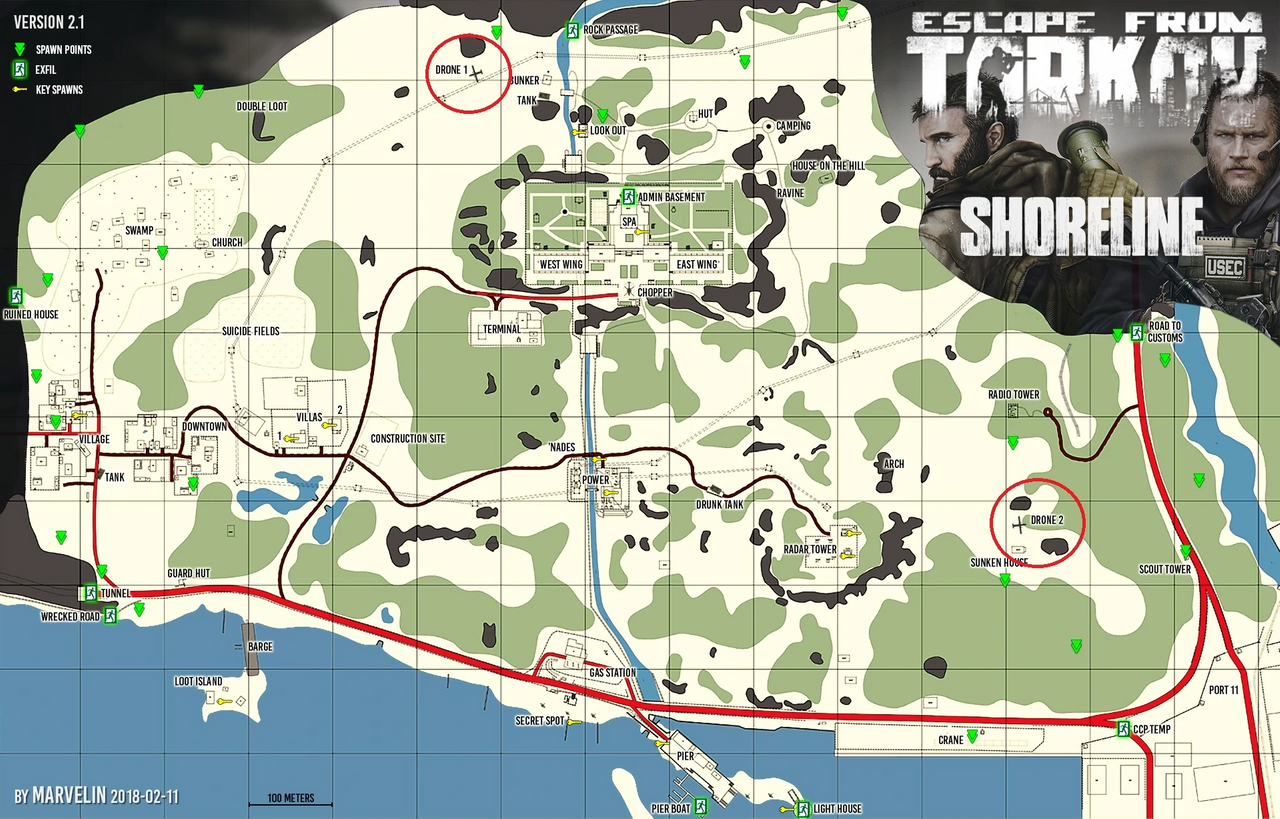 In Tarkov, you have a wide range of controls from leaning all the way to yelling taunts or information in-game. As stated, you can lean left and right in game, but that's not all. In addition, your player can blind-fire overhead as well as to the right (as your player is right handed). 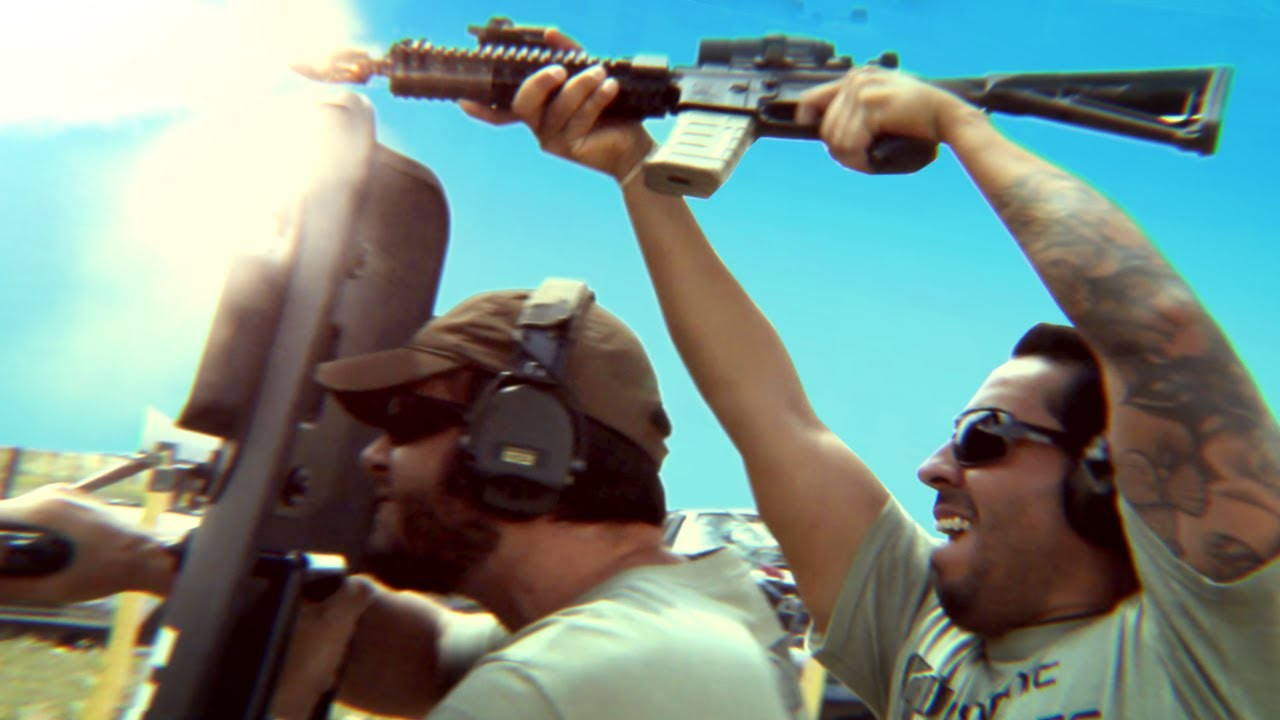 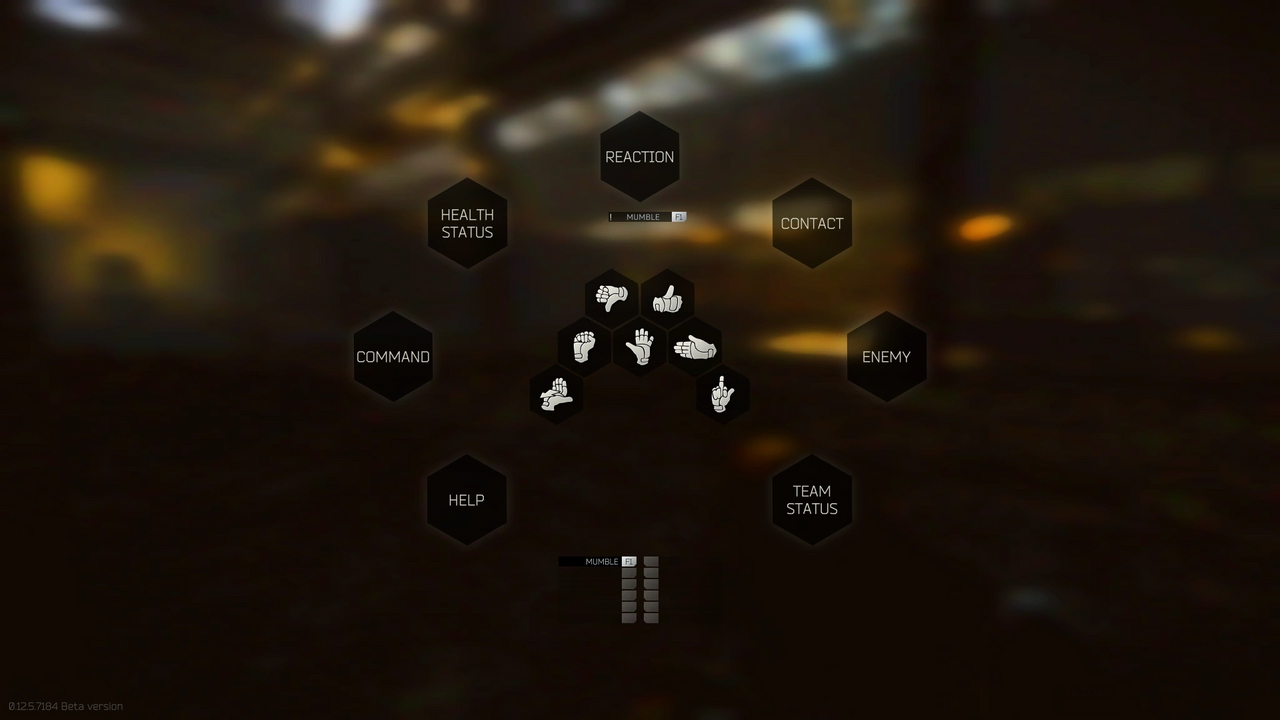 Continuing, by use of the caps-key, you can slow your movement and reduce noise while moving. Along with this is the crouching and prone, crouching is extremely vital in fights as there is not set crouch "level". Rather, scrolling can allow you to crouch lower/higher to make the perfect cover out of virtually anything.

Tarkov is known for its' infinite-seeming attachments and weapon suite that follows realism very closely. 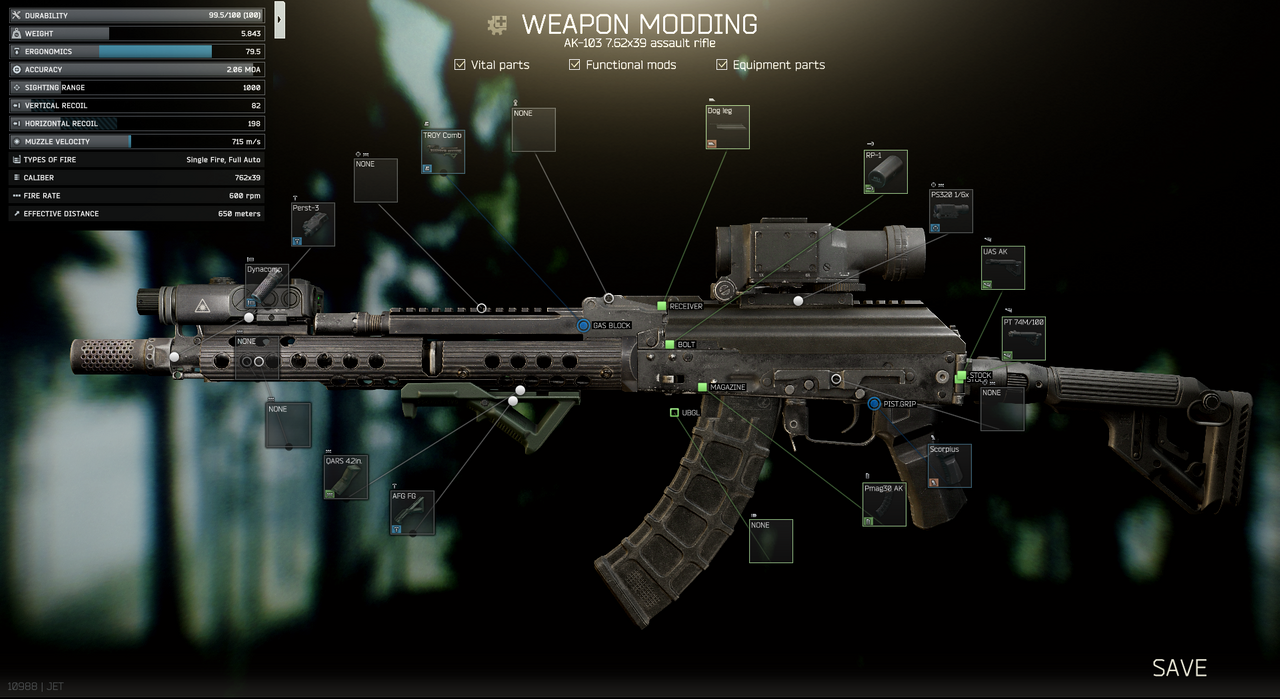 Shown above is the modding menu for one of the many guns in the game, on the top left is the statistics menu that needs to be closely monitored as everything will matter when out on the battlefield. This game tries to copy real life, if something is replaceable in real life, so is the in-game part.

Weight is a big problem, the heavier the weapon the less you'll eventually be able to carry in raids. This is only a problem when combined with other weapons and loot, so it won't seem like a big deal until your faced with being over-geared or leaving something good behind.

Ergonomics is the quickdraw attachment from older CoDs. The ergonomics will change the speed at which you can aim down sight. Of course depending on the type of weapon, such as an SMG will be much higher in ergonomics but the caliber round will be lacking.

Sighting range is something you should only have to deal with when on huge maps and I honestly do not look at it much. This has all to do with the sight you have attached on the rifle.

Recoil.. the biggest things that matter in this game, you have to know how to control it, or keep those numbers as low as possible. Recoil is no joke, the recoil on full-auto will knock your gun into the sky and you will not hit a single shot.

Bullets And The Variation 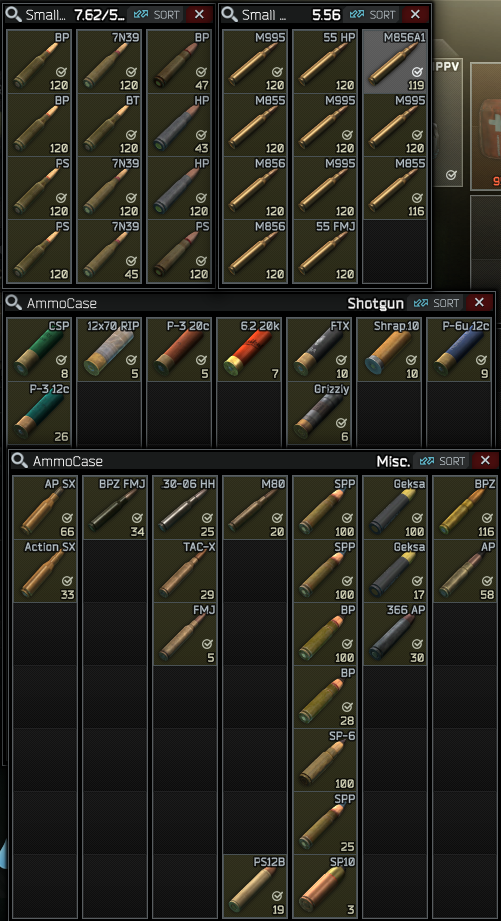 the amount of rounds in this game will make you feel soo noobie when you start. Not only does every gun have different calibers like their IRL counterparts, but also there is better/worse ammo for each caliber.

I know... it's a lot to look at. Early game, I wouldn't worry about this too much. However, later on you will need to know the difference between them and what you want to do with it. Some are really good for armor, others are better at bleeding and lethality.

I still do not know what every round is on the rankings, but I tend to look at the heavy bleeding percentage as well as the velocity of each round. I don't know if it is good or not, but I always go for the highest velocity round.

Welcome to the world of not just dying, but having to suffer the whole way down to the imminent end. You must loot at least a little bit so that you can continue to play. Each raid, you lose a percentage of your food and water constantly, a failure to monitor these can cause a wide variety of symptoms including death. Some of these symptoms are tunnel vision, shakiness, vomiting, decrease in stamina and more. 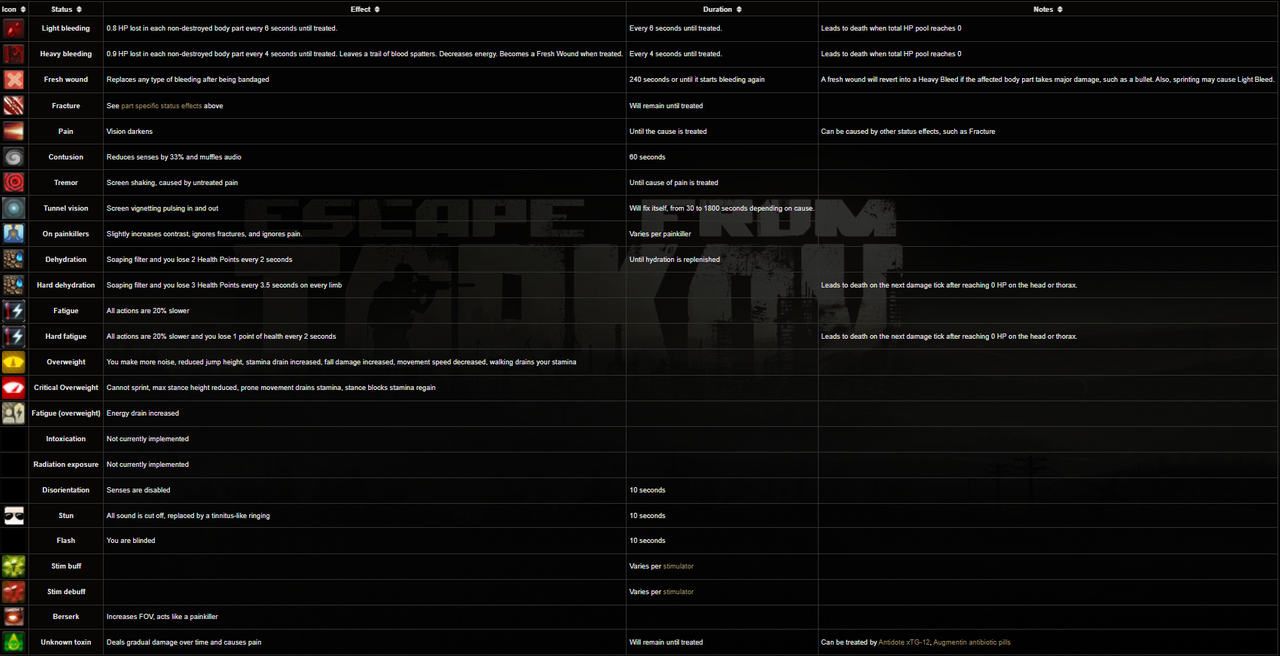 That's not all! There are a wide range of injuries that can happen, from being shot, all the way to falling a bit too far. Body armor and helmets depending on the level can help reduce the chance of something bad happening but it does not guarantee easy living. The maps are huge, you break your leg, or get shot in the leg enough will result in death from the shooter, or 20+ minutes of constant hobbling to get to the open extraction area.

All of this can be helped, if not completely alleviated. However, time is not your friend along with the one that shot you when it comes to healing these injuries. Meds are a priority in any loadout to hopefully reduce the chance of death and being able to keep all of that juicy loot acquired through the raid. Another crazy deep medical system for an insane game. 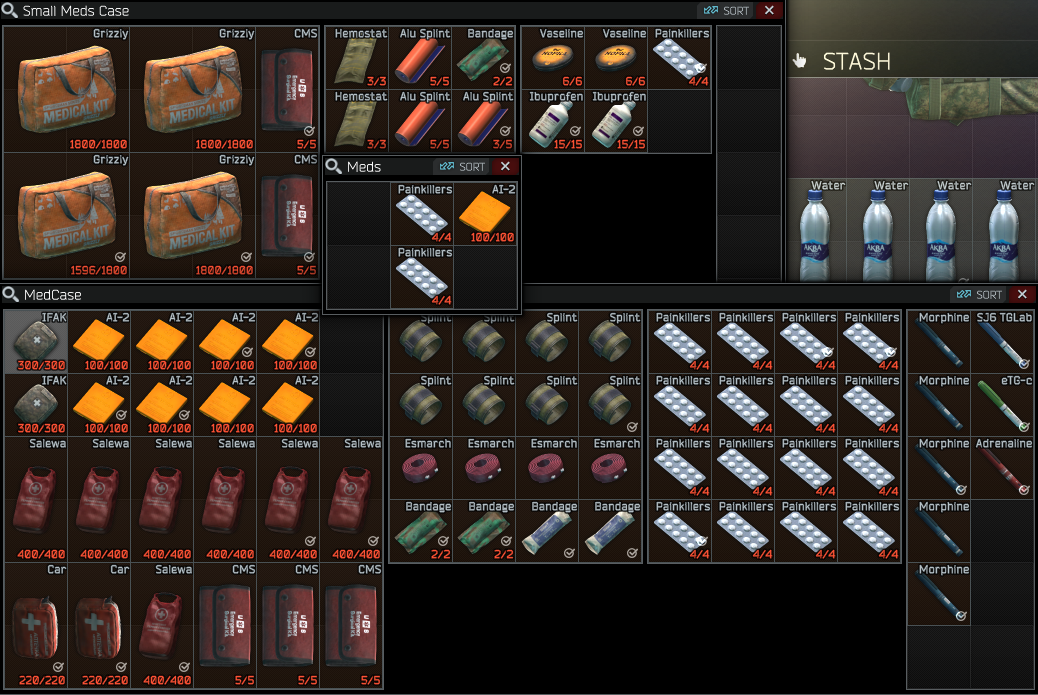 Everything has its' place, some stuff are the same and accomplish the job. However, not everything will, you need a good combination to make sure any problems can be fixed otherwise you face further bleeding and a horrific array of consequences.

The End (I Know, So Original)

By no means is this everything to expect, and there are other things I did not include. But this is why I see this as one of the biggest games with actual potential. If this game was not multiplayer only, it could bring in a huge player base (like me!) and allow for updates that can truly make this game the best FPS in the last decade. I mean, just think, have you ever heard of a game with such good graphics, intense medical/survival system, weapon customization through the roof, and maps more detailed than the newest GTA?

Now with all of these mechanics that I brought up, mix it with a world like SCUM with true solo play. I'm saying it now, the game would be UNBEATABLE.

But let me know what you think...

Thanks for reading!
Until next time...