I've always been a huge fan of the Warhammer (and Warhammer 40k) universe, the grim take on the fantasy genre is a refreshing take in contrast to the usual D&D light fantasy. In Warhammer, everything is viscous and there is a distinct lack of "goody two shoes" style of alignments and moralism. In many ways, it is much closer to reality... with corruption and human failing being ever present in the fight against Chaos. Even though I never really played the tabletop games (I was always too scared by the almost zealous nature of the players in the shops!), I would always get the books and manuals to devour the lore! I still do....

Mordheim is a warband management game with a heavy dose of skirmish based tactics... the sort of thing that is right up my alley! With permadeath of characters and nasty difficulty and highly realistic injuries and fragility, this seems like it could very well be one of by all time favourite games! 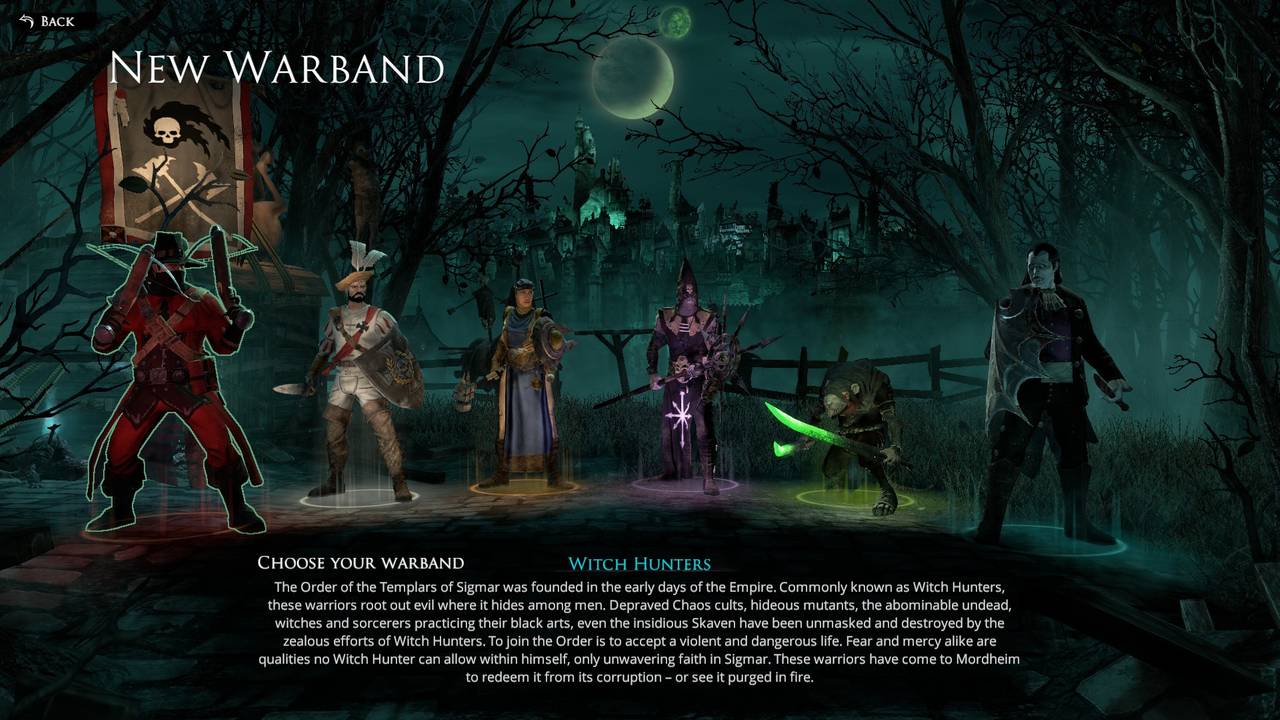 Mordheim is set in the city of... Mordheim! The city was a vital centre in the Human Empire, until the current time of strife and chaos when a comet appeared in the sky. The comet landed on the city, destroying it completely whilst scatter magical stones known as Wyrdstones throughout the wreckage. These magical artifacts are highly sought after by the various factions of the Warhammer world, and every faction has sent out Warbands into the desecrated city to recover as much of this valuable resource as possible.

You lead one of the warbands that is braving the Chaos and corruption to harvest these Wyrdstones... 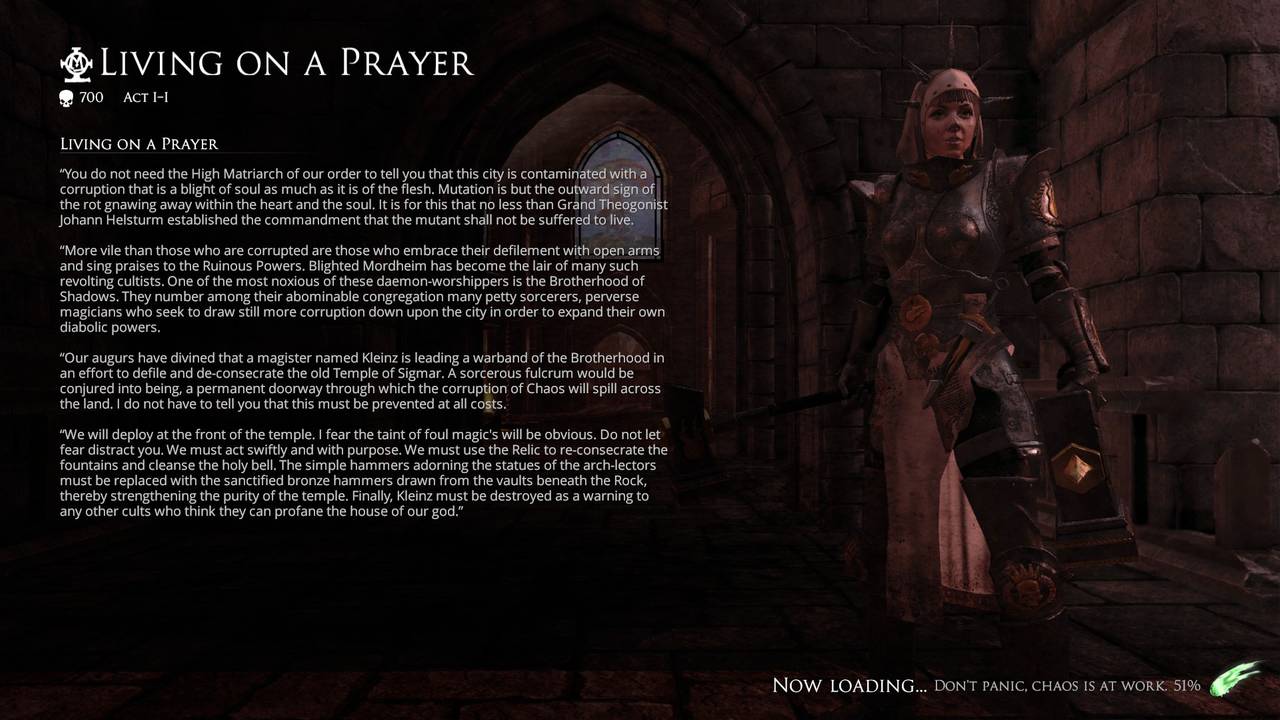 Each Warband has a loose story that is guided through the various Acts of the game by scripted story missions. You can choose to ignore them, but if you do attempt them.. be prepared for a nasty fight that will likely leave your Warband bloodied and beaten! 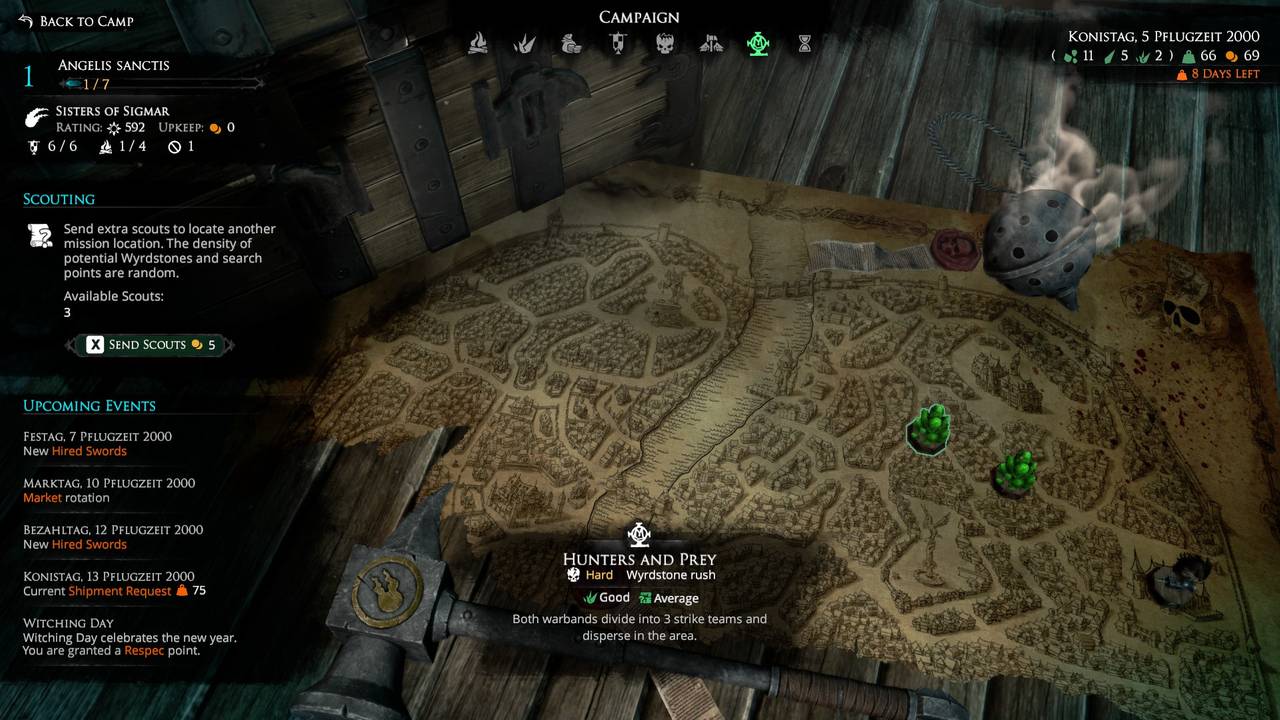 Mission selection takes place on beautifully crafted map... a salute to the tabletop roots of this game! Every "turn" there are only two missions that are available by default (plus a possible story mission)... more can be unlocked by sending out scouts, but the gold cost is pretty hefty for a warband to stomach near the start of the game. The actual information and intelligence available for any particular encounter is best described as barely there. You get a rough estimate of the encounter strength and potential loot on the map... and a rough idea of the beginning deployment of forces, but other than that... you are dropped into the dark.

What I find much more troublesome is the fact that the enemy team scales with the Warband that you deploy! So, if you deploy with more warriors, so will your opposition... I'm not a fan of this. Easy missions should suddenly get so much more difficult just because you fielded a stronger force... and likewise, harder encounters shouldn't get more manageable if you field a smaller group! It's a bit of a perverse mechanic... 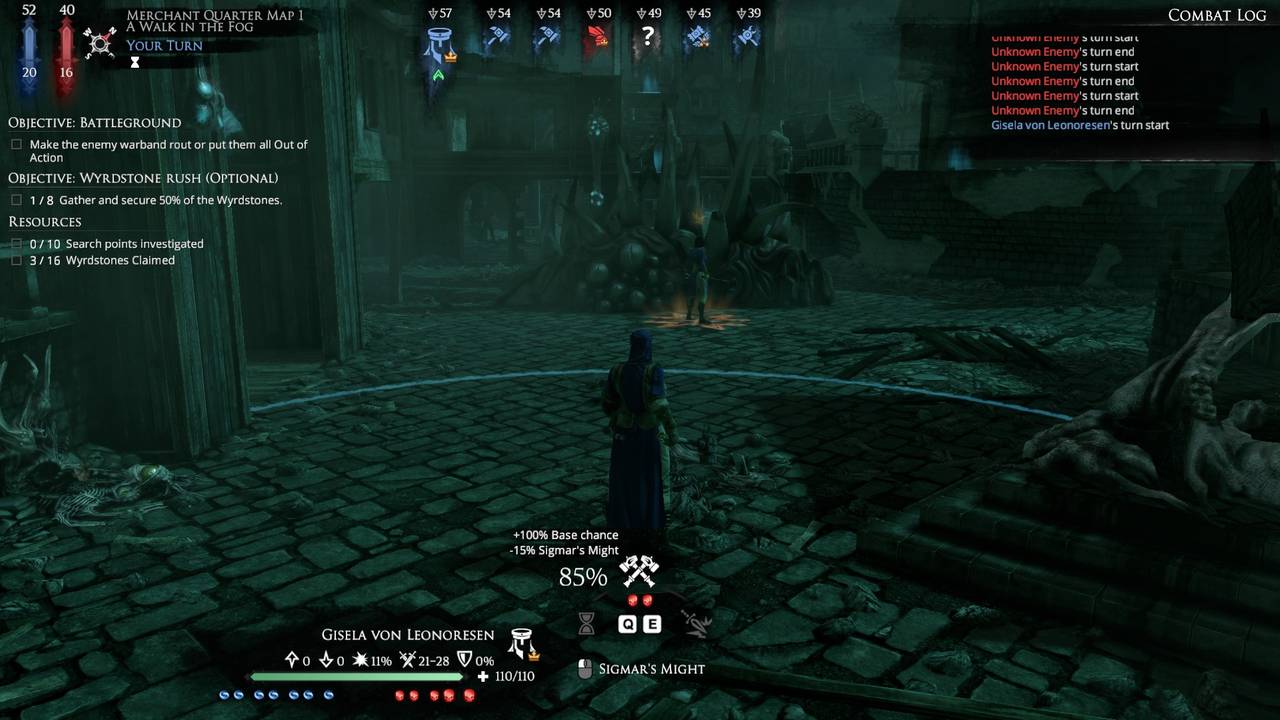 The meat of the game is in the tactical skirmishes between your Warband and the opposing force (Chaos or another warband). These take place in the ruins and wreckage of Mordheim, a location that is full of traps and Chaos magic, danger lurks around every corner and death comes incredibly quickly! So, a real test of tactics and nerves! Expect casualties...

Each encounter has a main objective which is usually a variant on Capture the Flag or kill/rout the enemy. Most often, it is easier to rout the enemy (reduce their morale) rather than killing them or completing the mission objectives. There are always additional optional objectives, which ARE definitely worth trying to complete if possible... extra loot is definitely a must in this game! Every little bit counts! 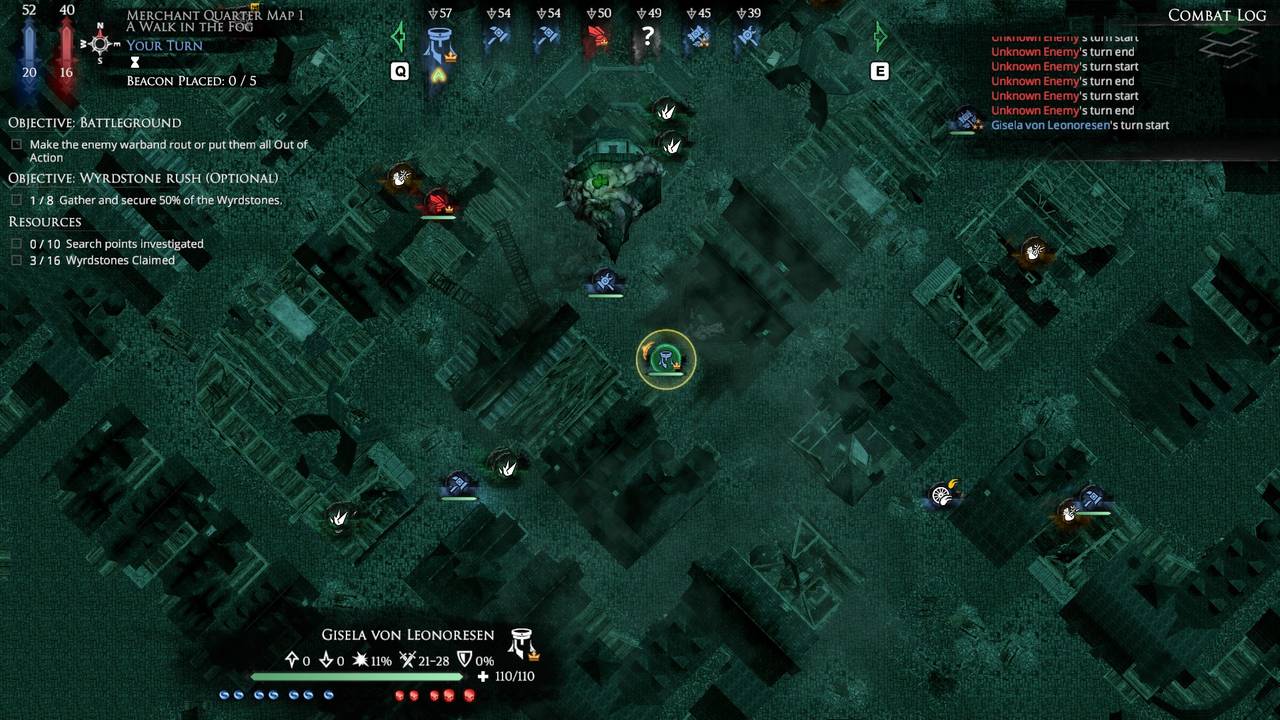 The top down map view is by far and away the most critical aspect of the tactical game. From here, you can get a rough idea of where enemies are and all the little back alleys and nooks from which they might appear. The fog of war in this game really keeps your information to a minimum... so, it is always good to be prepared for anything. Your warriors are fragile, and a hero can be easily taken down if they are caught unawares. The tactics and combat engine draws heavily from the board game... it is pretty dense and you will find that you will nerf more than a few of your characters as you level them and equip them... Still, after a while, you will get the hang of it and start to get some success with your warband, at which point the game transitions from being insanely difficult and frustrating to something akin to masochistic love!

The RNG as always in these games is a moment of lump in the throat suspense. As I had mentioned before, the melee/ranged/magic combat in this game is nasty and realistic. Your characters (and enemies) are NOT invincible gods... they take permanent injuries and die easily. The battle and life of each character is always up in the air... Every hit and miss is moment where the entire encounter can turn from bad to worse!

In the end, you will start to learn that placement and grouping up is really critical to the survival of your warband. Your heroes are strong, but NOT that strong... two or three weaker characters can easily mob and take down a stronger one, so it is critical that you winnow out the enemy ranks by catching them by surprise and hopefully isolated before they can group up. Every victory is likely to come with causalities in addition to loot. Mostly, you are scraping the bottom of the barrel in terms of loot... and your warriors will be hammered around. Generally, it is much more effective to aim to rout the enemy (reduce their morale) to make them retreat rather than defeating them completely in a pitched battle. You will lose less characters, and just surviving battles is the key to leveling up your characters! Every survivor of the encounter will level up a little bit... however, leveling up is not the big deal that it is in other games. Character growth is very much incremental, with 1 percent bonuses to certain skills or the ability wield a certain magic or weapon. You won't be looking at unkillable machines here... everyone remains fragile! ... speaking of fragile, every character is subject to potentially permanent injuries if they were sufficiently injured in battle. Sometimes, it is just a minor injury that benches them for a few days... other times, it is a debilitating injury like a lost eye or hand or leg. At this point, it is up to you if you want to keep them or ditch them by the wayside... However, some injuries do come with a little perk as well... so, it isn't quite the clear cut decision as you might otherwise think it is! Independent to the character growth... there is also XP awarded to the Warband as well. Individual characters have their own growth, but the warband growth unlocks new character classes, additional deployment slots and equipment. 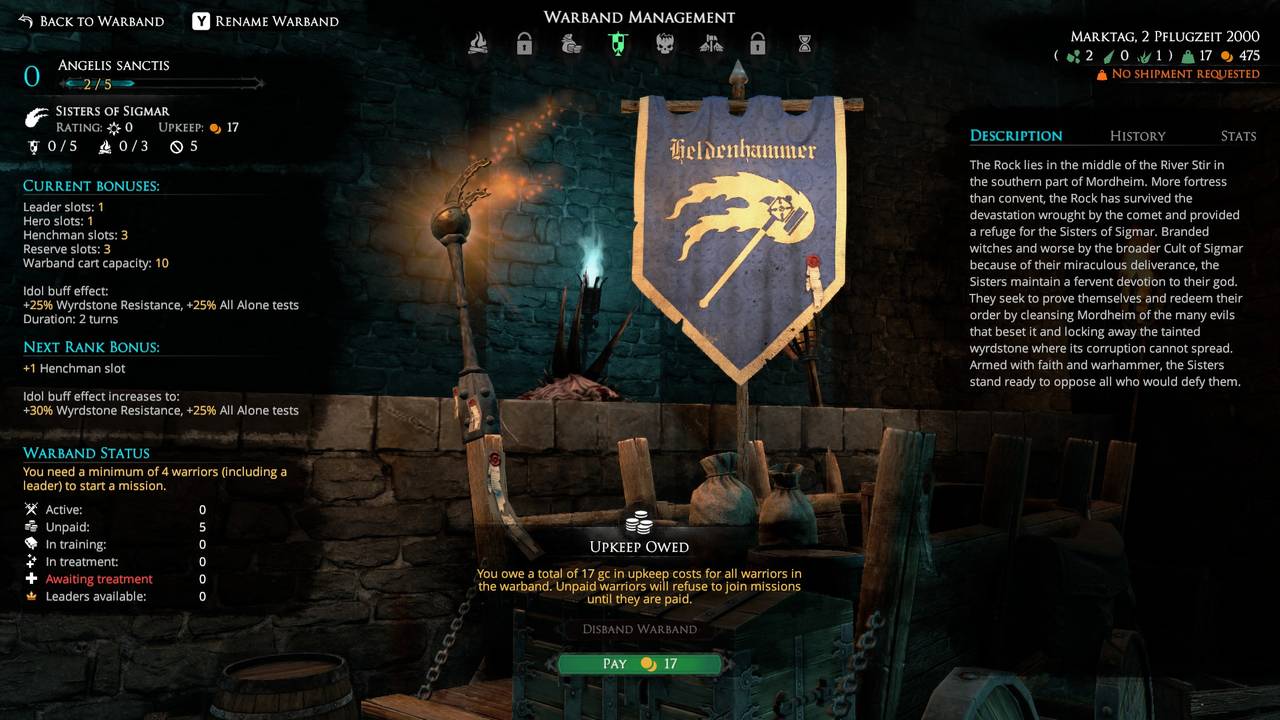 So, we go to the warband management meta-game. This is where you get back to your hideout and try to prepare your warband for the encounter... interestingly enough, each warband serves as a sort of mercenary group. You NEED to pay your warriors before they take to the field... that means that you have to make sure that you loot enough from the battlefield to make sure that you can afford to pay them. Equipment is pretty cheap and generally not worth it, it's not like other RPGs where every peasant seems to own a magical sword... Wyrdstones are where the money is! ... and the factions that have sent you into this hellhole will purchase your Wyrdstones for a nice price. Your primary faction will send timed demands that you MUST fulfill for Wyrdstones or the warband is dissolved. However, after you have completed these demands, you can fulfill additional requests for gold... and after enough requests are fufilled and your reputation with the various factions grow, you do get some nice little perks. Most of the heroes (and some of the lower ranks) have a vast array of skills and spells that they can learn. Again, it is mostly incremental when it comes to perks and skills... but the spells do give a certain edge. However, magic is very much a dangerous thing to play around with in Warhammer... with blowback and self-harm definitely on the cards with every cast of a spell! I've had a fireball wipe out my Warband... it was supposed to be a healing spell!

Another thing about the skills and spells is that they take up very rare skill/spell points to learn... plus a huge amount of gold (in comparison to your reserves)... PLUS, the character is out of commission for a decent amount of time! So, just LEARNING a skill/spell is a huge investment of time and resources into a single (very fragile...) character... On the two machines that I played Mordheim on (see below to the review hardware), I had mixed results. The XPS generally struggled, whilst the Fusion had not too much of a problem with the game. However, the game is NOT really well optimised in terms of the opposing force AI... enemy turns can take a VERY LONG TIME!

That aside, the style in terms of visuals and sound is appropriately grim and dark in keeping with the Warhammer and destroyed city settings. Of particular note is the narrator, a deep and grim sounding male... and the slow and heavy metal sounds that accompany the button presses! I LOVE IT!

Mordheim is a game that will appeal to a particular sort of gamer. You have to love turn based tactics, and a deep and complex ruleset to start with. Then you need to come to grips with the fact that your characters in the Warband are fragile, and at times expendable in pursuit of the "greater good" of warband survival. Bonuses from skills and equipment are minimal and very much incremental... don't expect to have your superhero complex satisfied, your representatives in this game world are very very very squishy! So, if you appreciate a really steep learning and difficulty curve in a game with an awesome dark fantasy setting, Mordheim might be the game for you.

Personally, I really do enjoy the game... mostly. I wish there was more mission variety, and I REALLY HATE the fact that the opposing force scales with your deployed force. More breadth of deployments in the city would also be good too... and a wider range of variety in equipment, as the various warband factions are heavily stereotyped into a small range of items and equipment that suit their fighting styles.

Much of these gripes probably stem from the faithful rendition of the board-game rules into the PC adaptation. I do love faithful recreations... but the fact that we have a different medium can also allow for an expansion of scope and mechanics as well, to better serve the fact that the game becomes less a single skirmish encounter on a table top to a fully "open" survival and resource management game.

Splinterlands (aka the best blockchain game out there!) Humble Bundle Subscriptions, it's a no brainer for the dedicated gamer! The classical music community (Subscribe at Steempeak and Peakd) at #classical-music and Discord. Follow our community accounts @classical-music and @classical-radio. Community Logo by ivan.atman
hive-140217gamingopgamingreviewteamaustraliathealliancepalnetneoxiansteemacebattlelifestyle
bengy75
via peakd/2021.01.3
Reblog
$ 51.03
376
16 Comments