Square Enix released a Debut Demo for this project in order to gather player's feedback. (They did with Bravely Default II with favorable results.) The Demo released just after it was announced in Nintendo Direct in February 2021 with the full game scheduled to release sometime in 2022.

I think Project the temporary name "Triangle Strategy" is uniquely uninspired... I saw many comments about the trailer and elsewhere that it's a bad name. From marketing perspective I agree. Still, I'd like to imagine if the game became so popular it replaces every other use of the term on search engines! That would be fun to watch~ 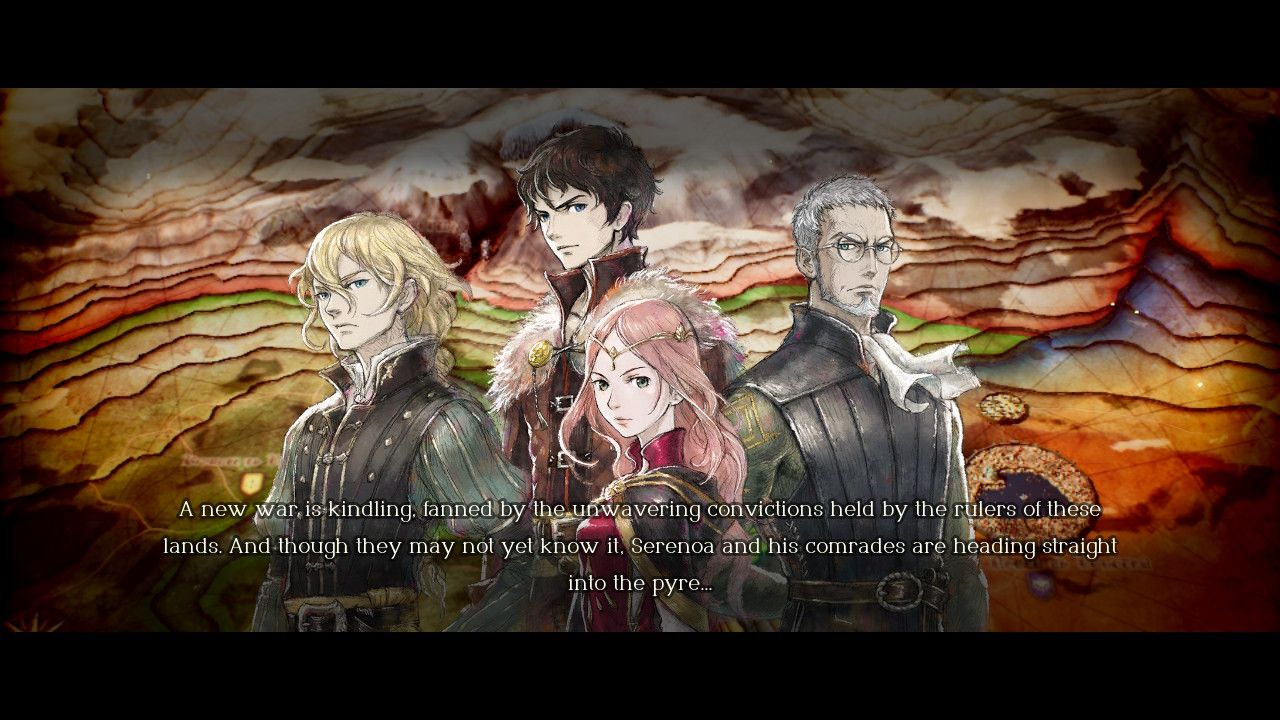 I played the Demo until I got a feel for how Triangle Strategy's story and gameplay. I didn't finish it. I stopped in the second battle, but I love the many gameplay systems Triangle Strategy attempts to add to the war-game/tactics genre.

The Demo starts by putting the player in the middle of action. No context is given. Only a backstory about Salt-iron warm in which three nations fought over each other resources. Years after the war ended, the current political unrest is leading to another war. We are thrown in the middle of Chapter VI. Glenbrook royal family is being attacked. The main characters: Serenoa the prince of one of the biggest three houses of nation, along with his advisor, friend and fiancée, are trying to stop the invasion... Things happen and the party must stop the evil Gustadolf while branded traitors.

Little context is given, but the game does a good job hinting at what happened in the leading chapters. The main character saw the antagonist murder someone they held dear, then the blame shifted on someone else. With that, I built a backstory for the game in my mind.

Despite taking inspiration from Final Fantasy Tactics, this game is completely different. For a start, Triangle Strategy gives more information than the average tactical RPGs including characters turns order, the expected damage and the areas enemies can move/attack.

It's not the information that makes me like it, but the presentation. It's nice and doesn't deter from the action. You could play while ignoring them like I did, or you could incorporate as much information in your plan to win. The battle area can be used to your advantage in this game. Certain terrain types affect the amount of damage dealt in them, and they are affected by Magic. Grass can burn and get wet. Some areas can be interacted with, like in my second battle (after choosing to save Prince Roland) in which the battlefield is filled with traps I needed to trigger.

Triangle Strategy encourages the player to use the characters' unique skills. There doesn't seem to be a class/job-change system in this game. (There isn't one in the demo and it's a system too integral for a game to omit.) You control more than 10 units in battle, each with their unique skill and an efficient way to use. There are many hidden ways to use the game's system to your advantage like placing the units so they help each other out in attacking or using their skills. 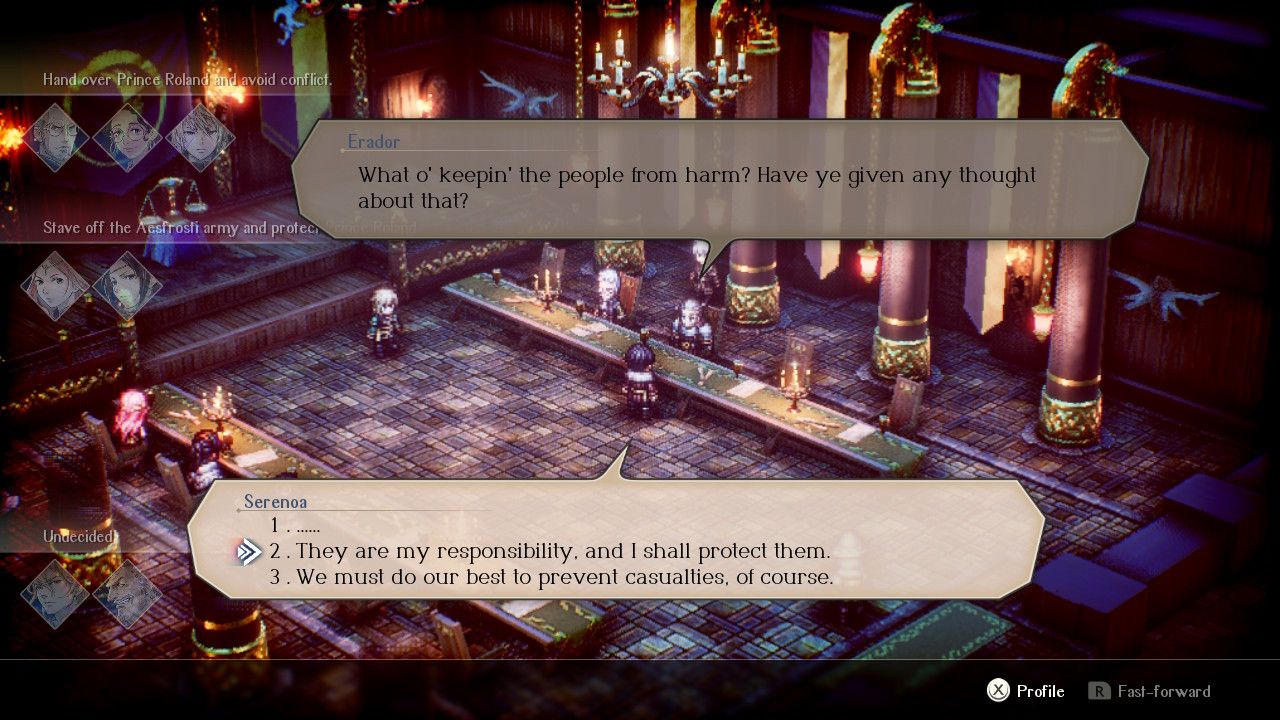 The Scales of Conviction is my favorite mechanic of Triangle Strategy! It's the game's version of branching the story: When the group can't decide between themselves, they decide by Vote.

You (as Serenoa) can persuade the counsel to reach the decision you want to reach. You are allowed explore town to gather more information to help doing so. Depending on the information you have, new options can appear when you talk to the party members. Some council members are harder to persuade than others.

I managed to convince all my companions expect the advisor Benedict that my decision is the better one. After I succeeded and saw the results in the next battle, I'm not so sure if that was a good decision. I love when games provides dilemmas like these~

I love the attention to detail in Triangle Strategy. From how the scenes are framed, the blinking of the sprites to how the characters look at each other for a split second when they hear grave news. It's small detail that makes the flow of events feel more natural.

They bloody scenes are handled artistically too. The art style leaves so much to the imagination that it manages to be so gruesome and non-graphic at the same time! The voice acting is good. It is very dramatic. Similar to Bravely Default II's voice acting (I'm talking about the English version) but it felt better fitting here. It's the type of voice you expect in a historical war story.

After playing this and feeling the beauty of HD-2D presentation, I want to play Octopath Traveler by the same producer when I get the chance.*

I thought while playing "Ah, the storytelling is clearly Japanese." The tone of this War is very optimistic if not romanticized. There's an underlining message of "all lives matter" that I expect from a Japanese War story.

On a final note: This Demo of Triangle Strategy is hard! They did that with Bravely Default II Debut Demo. The reason is to force players to use as much of the game's mechanics as possible which in turn will provide a better quality feedback to the developers.

I look forward to this game's release in 2022. Any JRPG/Tactical-RPG with branching story can catch my attention easily, but this one seems to be on the higher-end of quality. I hope it'll be as amazing experience as I imagine!