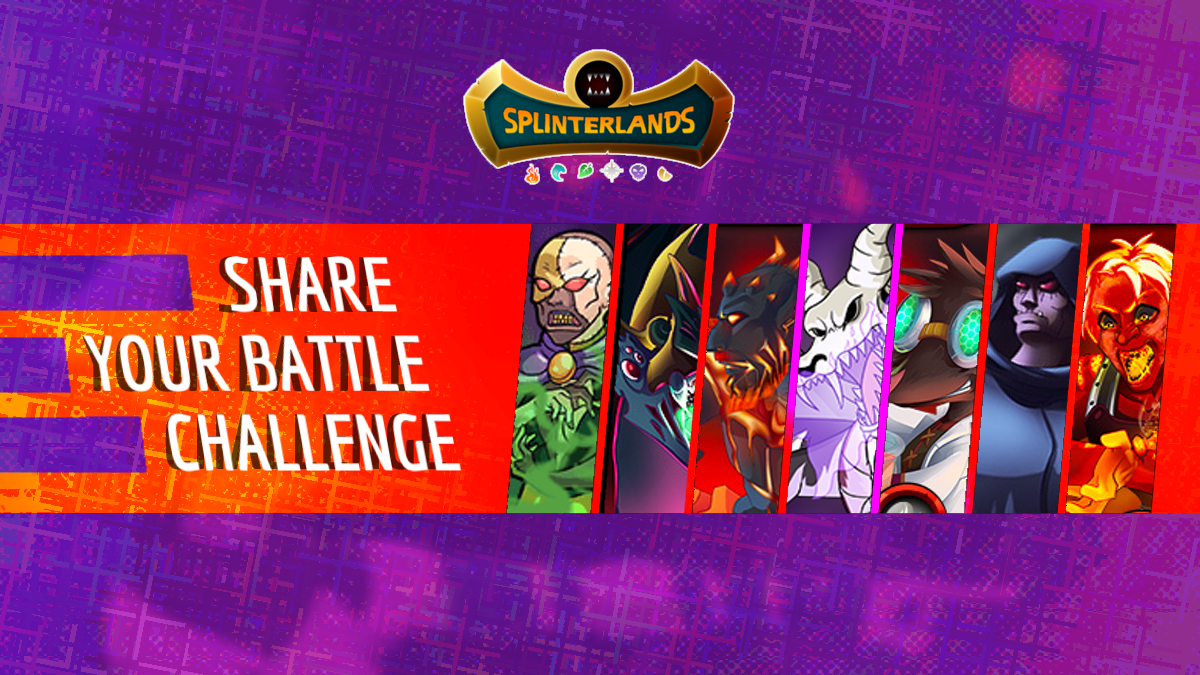 Hi everyone, Welcome to my post regarding the "SHARE YOUR BATTLE" Challenge. For this week's challenge, I'll be sharing my battles using Dragon Splinter. Actually I wanted to share this last week, but I didn't have much free time to write the entire contents of this post. And I can only do it this week. But before going to the main discussion......... 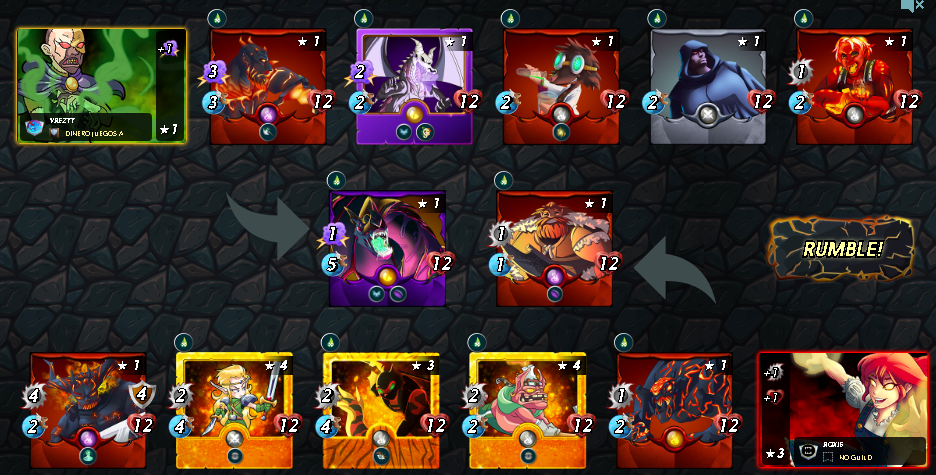 The opponent chooses to use Tarsa (Give 1 Additional Healh point to All Allies Monsters and 1 Additional Attack Point to All Allies Melee Monsters) to use in this battle. He also brought Void Monster (perhaps he already guessed that I would choose Magic monster) and Forgotten One which has IMMUNITY (perhaps this is the reason he chose Tarsa over Obsidian) 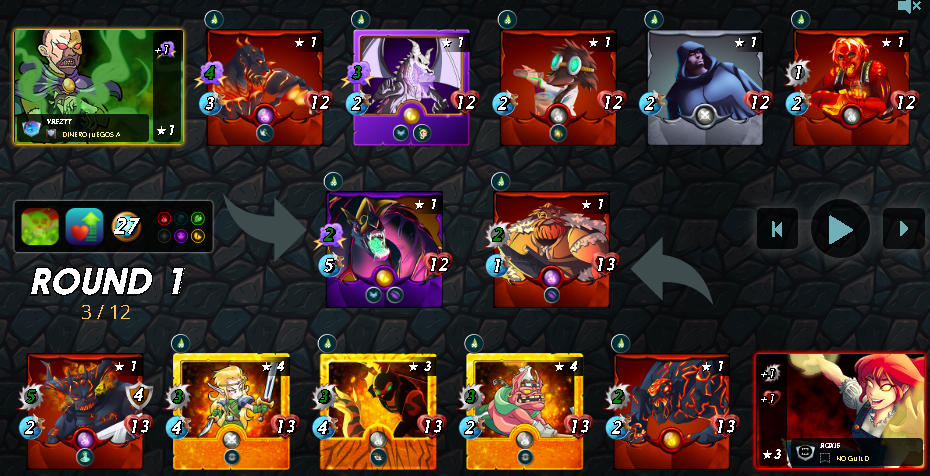 Tarsa's Ability gives additional 1 Attack point to all opposing Melee Monsters and 1 Additional Health Point to All opposing Monsters. There are no additional abilities from enemy monsters.

Delwyn Dragonscale's additional 1 Attack point to all my Magic Monsters. There are no additional abilities from my monsters. 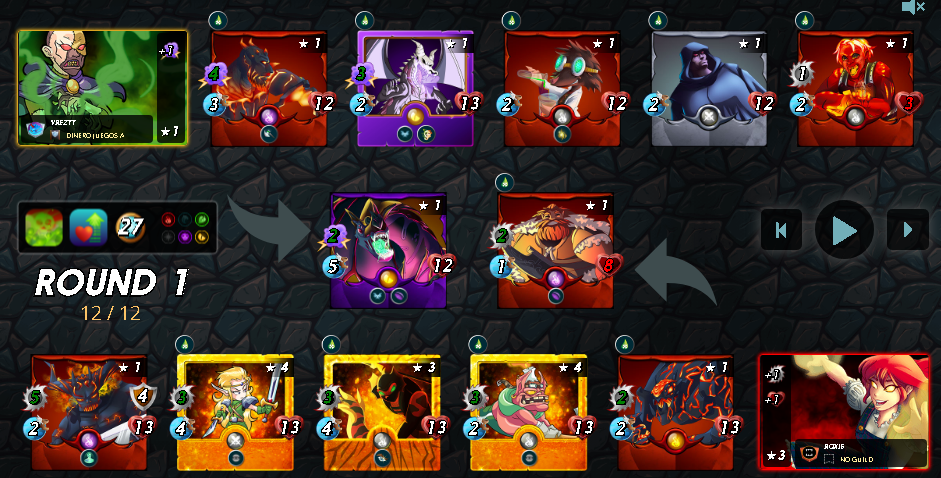 In round 1, all my Magic Monsters (Void Dragon, Djinn Inferni, and Black Dragon) attack Tusk the Wide. But unfortunately the attack that hit Tusk the Wide was halved (from 9 to 5) due to the VOID ability of Tusk the Wide.

Black Dragon gets an additional 1 Health point from this attack.

Meanwhile on the opposing side, 3 Monsters (Serpentine Spy, Elven Cutthroat, and Kobold Miner) attack Radiated Scorcher and only leaves 3 Health points. Tusk the Wide tried to attack Void Dragon, but his attempt failed due to the speed difference which was quite far and Void Dragon has FLYING Ability.

In this round, Scavo Chemist managed to remove the poison effect of Void Dragon. At the beginning of round 2, the poison effect starts to work. monsters that have this effect, their Health points are reduced by 2 points

In round 2, 3 of my Magic Monsters attack again Tusk the Wide and can only leave 1 Health point (can't beat him directly)

Tusk the Wide's attempt to attack Void Dragon still failed in this round. 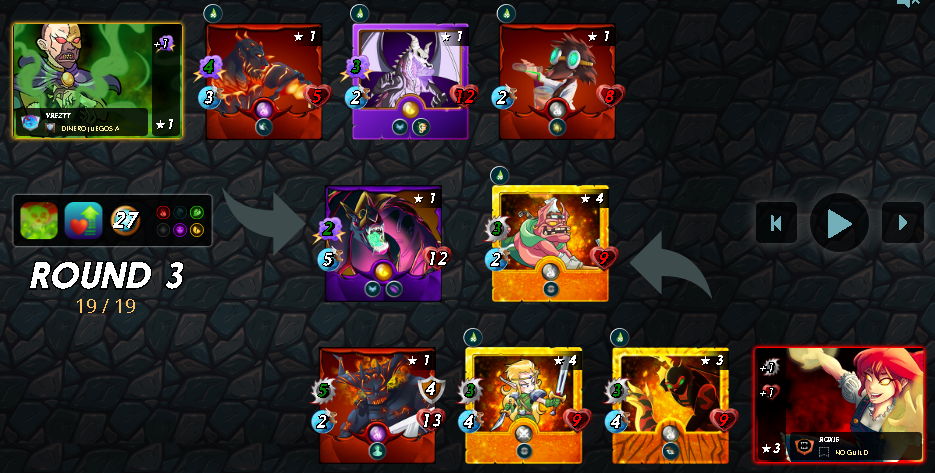 At the start of round 3, the poison effect starts to work. monsters that have this effect, their Health points are reduced by 2 points. Tusk the Wide is the only monster to die in round 3 due to this effect.

In round 3, 3 of my magic monsters attacked and instantly defeated the Scorch Fiend who was occupying the position left by Tusk the Wide. This causes the Kobold Miner to occupy that position, and the SNEAK ability cannot be used because he can only attack the monsters in front of him.

On the other hand, Elven Cutthroat and Serpentine Spy managed to defeat Chaos Agent. Meanwhile Kobold Miner couldn't even scratch the Void Dragon's Health Point at all. 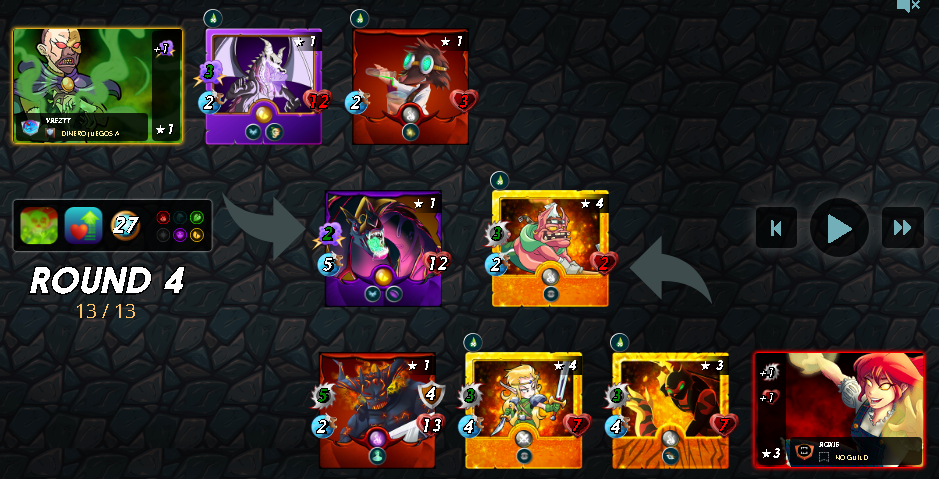 At the start of round 4, the poison effect starts to work. monsters that have this effect, their Health points are reduced by 2 points 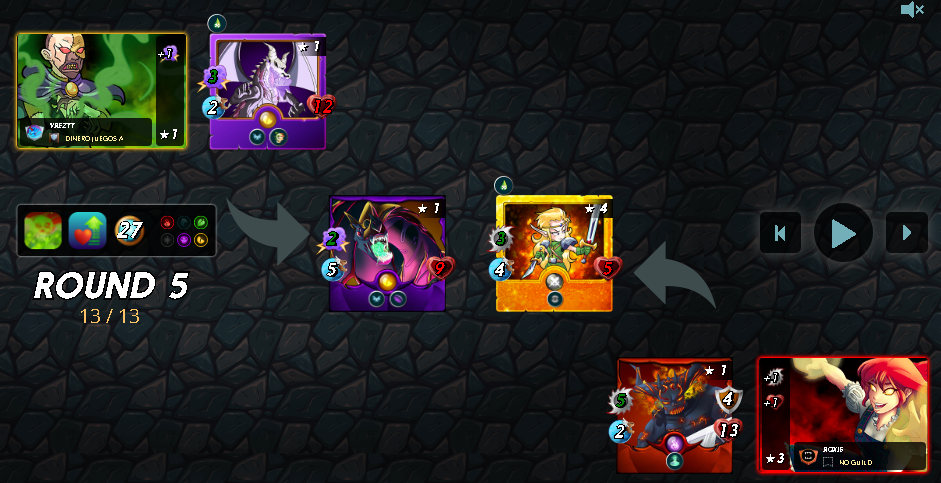 At the beginning of round 5, the poison effect starts to work. monsters that have this effect, their Health points are reduced by 2 points. this time it's Kobold Miner's turn to fall in round 5 due to this effect.

In this round, Serpentine Spy managed to launch an attack on Void Dragon (because the SPEED difference is not that far). But in the end Serpentine Spy was defeated by the attacks of my 2 Magic Monsters (Void Dragon and Black Dragon) 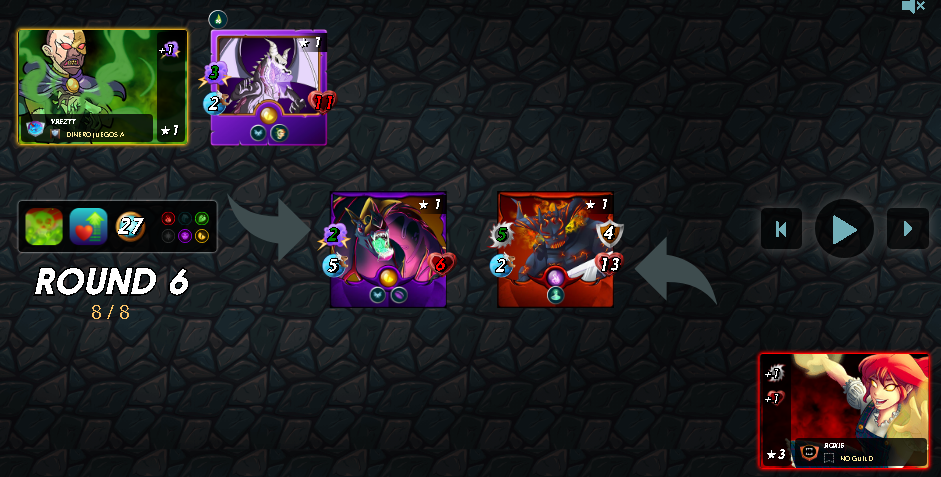 At the beginning of round 6, the poison effect starts to work. monsters that have this effect, their Health points are reduced by 2 points

In this round, this time it was Elven Cutthroat's turn to successfully launch an attack on Void Dragon. But again, in the end Elven Cutthroat was also defeated by the attacks of my 2 Magic Monsters (Void Dragon and Black Dragon) 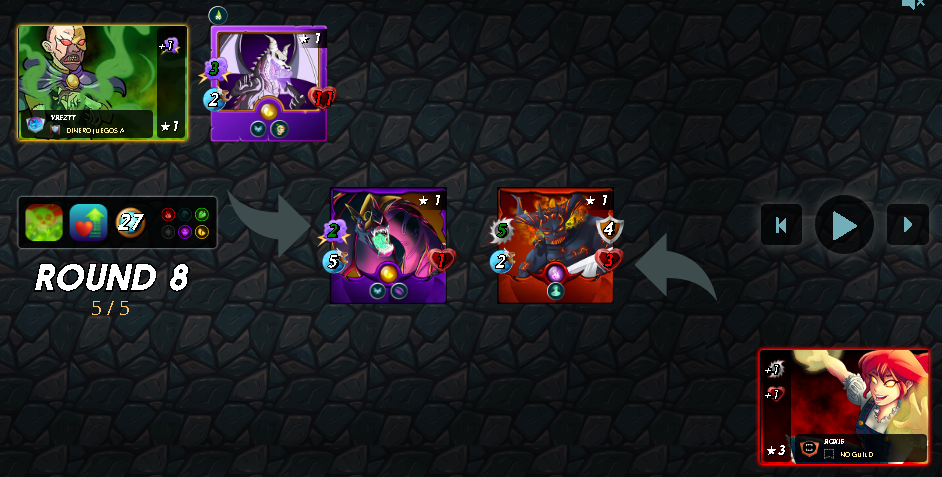 The only remaining opponent monster is Forgotten One, it's quite easy for Void Dragon to defeat it (because in my last battle, my Void Dragon always won when only dealing with Forgotten One) Moreover, I also still have a Black Dragon assisting the attack.

If one were to say whether my strategy worked this time, I might feel more luck on my side. The reason is

For the next strategy maybe I will swap the positions of some of my monsters.

Yes, Void Dragon is like Djinn Oshannus from Dragon Splinter. even though his Attack point and Health Point are lower than Djinn Oshannus, but he has low Mana and FLYING ability to increase the chance to dodge the opponent's attack.

That was the battle I shared this week, I was still able to survive this time because of the FLYING ability and the EQUALIZER Ruleset. The result might be different if I didn't have both. Hope you guys get an idea after seeing my battle this time.