Just In Time For A Legendary

It's been a rough little weekend for Splinterlands as the game was down for a good part of it as the servers where being upgraded. Good old growing pains but hopefully a more stable system in place now with easier upgrading options with minimal down time.

The team did a great job thought keeping us up to date about what was going on in the discord channel as well as other social media channels so THANK YOU for that. Downtime is understandable but it's important for gamers who really are investors now to know what's going on.

Anyways the season is ending here very soon so I went as fast as I could to complete my quest. My guess is the quests reset after the season ends? That might not be the case though. However to play it safe I wanted to get it done. 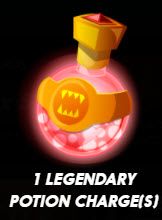 lol, not the greatest item as it provides no real value in itself to the account but it still comes in handy when I unlock decks which will be something that happens more often once chaos packs are here.

Does anyone in the splinterlands community know if quests reset at the start of a new season?