Splinterlands - How Many Cards in Circulation? 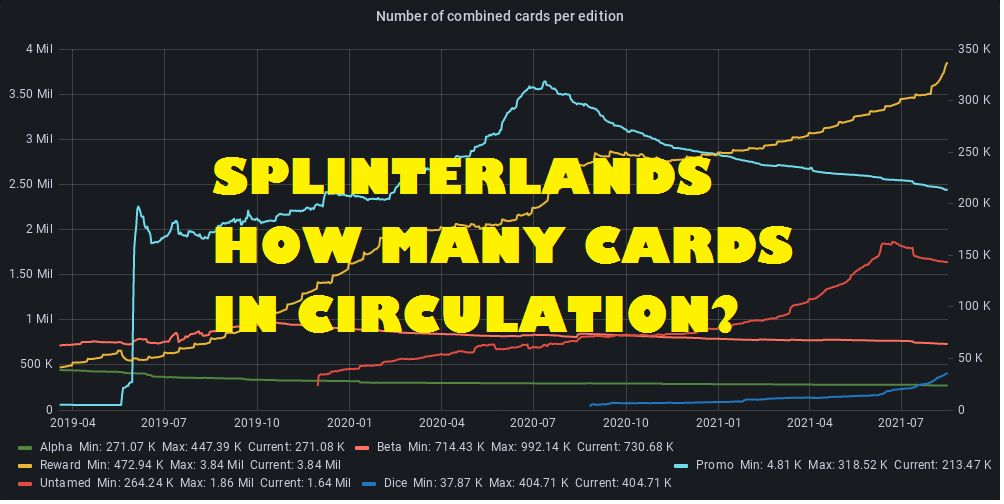 Today was suppose to be the end of season and players were to collect their season's chest loot. Instead the game got overwhelmed with activity to the point where it has been temporary stoppage of battles. So instead of talking about season ending rewards in this post I will have to do so tomorrow as the season has been push off for another 24 hours.

I think a good topic for new comers to the game to be know about is the current amount of cards available to play in the game. That way players will know how rare or common certain edition of cards are and how valuable they currently are and how much potential they have in the future.

Short History of Each Edition 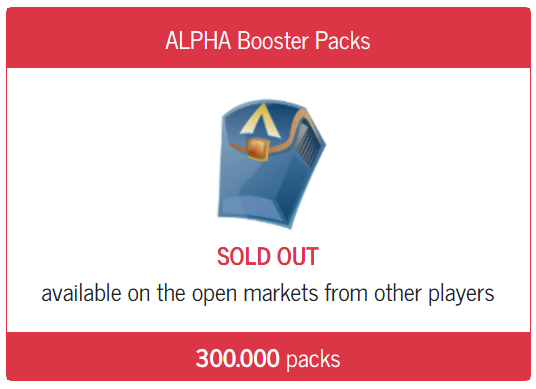 The original first booster packs of the game were available in early 2018. At the time cards were just based off of splinter, image, and name. There were no stats. A few months later the cards would include stats which was the start of the battles using just alpha cards.

As of now there are currently less than 7k alpha unopened Alpha packs. There is potentially some players who have bought at the pre-sale and not realized or lost their account passwords and can't access to their packs. Or it could be real diamond hands and the remainder are being held so they could sell for much more now. 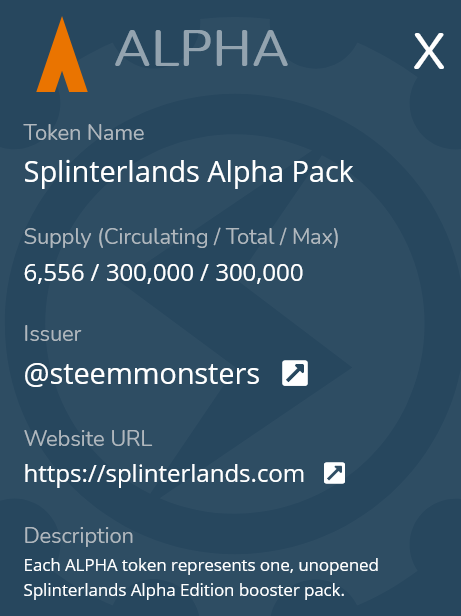 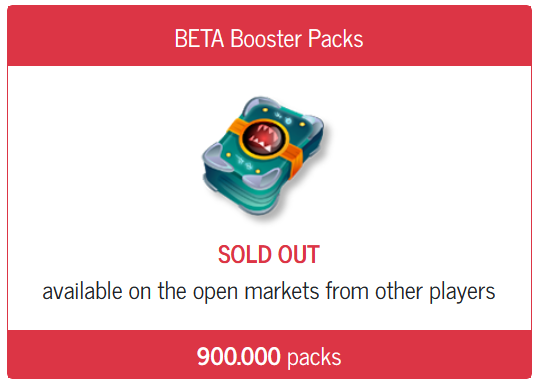 With what at the time would be a low supply of cards it did not take long for the next edition of cards to roll out. Beta came out late 2018 and it encompassed mainly all of alpha cards but in Beta version and introduction to the neutral splinter. There were also some legendary summoners that would later on become some of the most sought after cards in the game. 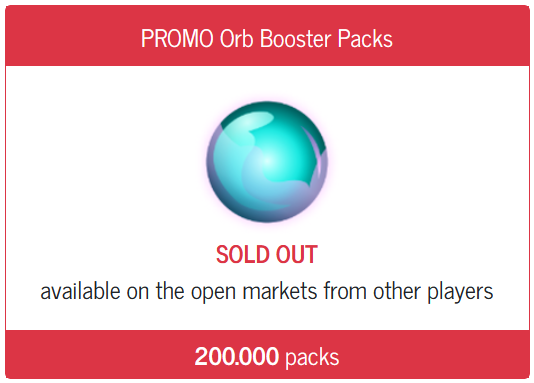 When orbs were introduced they were only available to be purchased in DEC. Not long after players would be able to potentially win Orbs in reward chests. The cards in the Orbs were unique in that it pack only contained 3 cards. Still the cards under promo category gave users bonus for use when winning battles.

While talking about the Promo cards there would be a few scattered pre-sales and promotions offer by the game's developers that feel either right after alpha release or up to orb release. In those occasions the cards all remain under the promo edition. 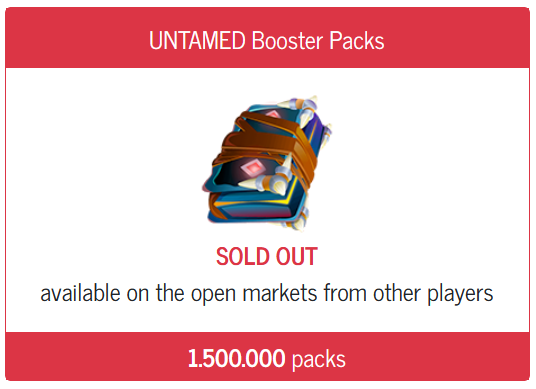 Not long after the completed sale of Beta came forth Untamed edition. With air drops for every 100,000 packs sold it still did not gain real traction in sales relatively to what we are currently seeing. It was officially sold out about a month ago but currently there are plenty of packs on the open market fetching a retail value of close to $25 each.

Considering the fact that Alpha, Beta, and Untamed packs all started at a price of $2 when sold through the game it is amazing how fair we have come to witness where the prices of the unopened packs have become for each edition. If present value of alpha edition packs is a prediction of the future then three years from now Untamed unopened packs could likely fetch upwards close to $300. Of course this is not financial advice and outcome could vary considering there were more Untamed packs made and DEC burn rate of the cards are less than alpha edition. 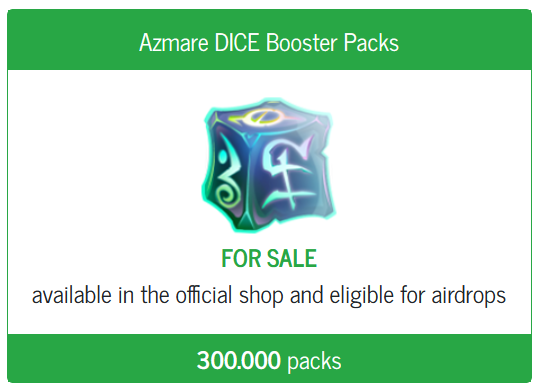 When Orbs were all sold out Dice was introduced. As it stands now Dice packs have reached over 200k in sales and will be sold out pretty soon with a little over 20k packs left as of writing this post. Dice packs similar to Orbs could only be bought with DEC. Furthermore Dice packs could not be obtained any other way than the use of DEC to purchase. 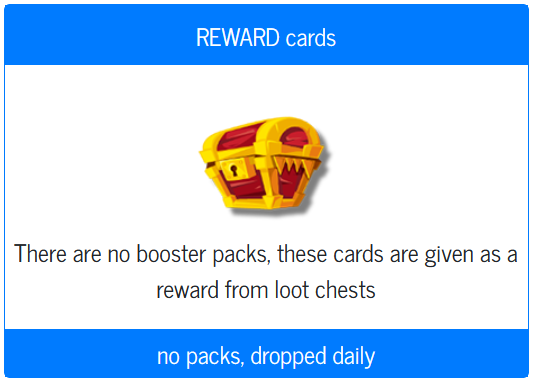 Win players earn reward chests there have always been cards they could win in those chests. From the very beginning of the game those chests included individual cards in each chest. As the game progress with more players the rewards had wider distribution. With that reward chests were divided into multiple types of rewards rather then cards alone. In any case Reward cards are the most printed in the game and this edition is on going and has existed with new cards arriving once old ones are out of print.

How Many Cards In Circulation Now? 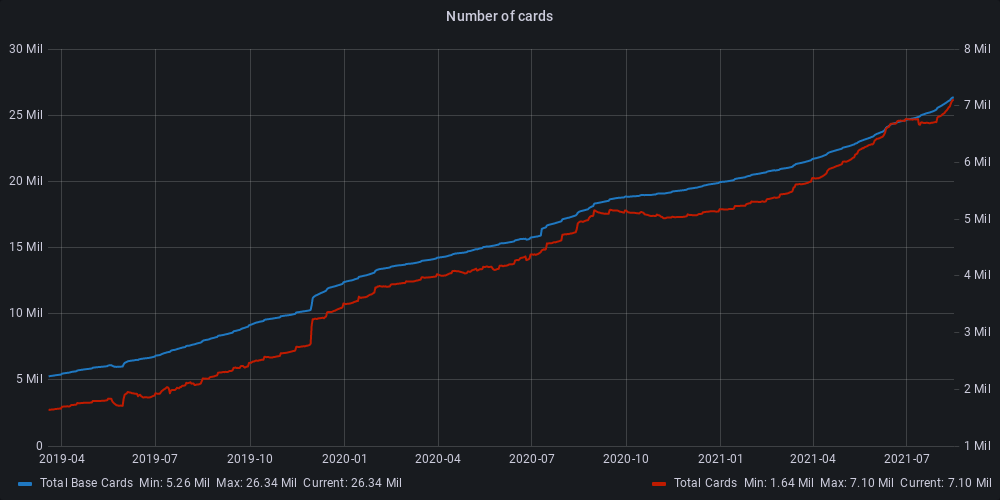 Chart above directly from Splinterlands indicated there are over 26 million cards minted to date. However when players have staked and burned cards the actual in game for use cards is at 7.1 million. To interpret the chart a bit better has a clarification. The blue curve is the maximum possible cards created for the game. The minimum is the amount of cards the game started before it was playable. The red curve is the maximum amount of cards available currently in the game to use. If per say with the remaining 7.1 million cards were to be stacked to max level there would only be about 1.64 million cards for use in game as the minimum. 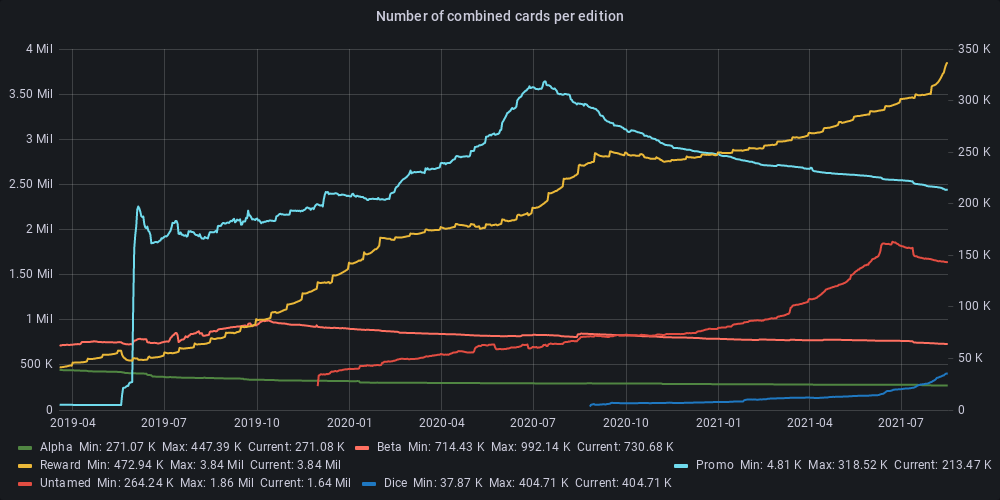 Now the most latest chart of each card ever was in circulation based on edition is shown above. This chart is also directly from Splinterlands. A careful look at the numbers and you can see that alpha currently has +271k cards in circulation. This is very limited considering each packed originally had 5 cards and there were a total of 300k packs created. Close to 80% of the opened packs' cards are either burned or staked to level up monsters.

It is worth noting Rewards edition has the most and continue to rise because after an existing reward cards becomes out of print there is a new one in its place. Therefore this edition is on going and make sense that it continues to rise as time passes.

What is somewhat eye opening is that Untamed edition has begun to slope down. Since its completed sale of packs in game it has been a steady decline in quantity of cards in circulation. This matches all the other editions that have been sold out before Untamed. In Alpha, Beta, and Orbs- apart of Promo, are all sloping negative and continue to do so. This making less and less cards available for players to play, but in turn likely also making the cards more valuable due to its scarcity.

I would like to end this post by emphasizing to players who are new or hesitant to want to start owning cards due to prices that appear to high. The fact is the game is growing with new players exponentially. While the quantity of cards available to have are being reduced with each passing day.

For those concern there is not enough cards to play though and may cast some new comers from joining, need not to fear. There is already a new edition of cards in the works and hopefully will beginning pre-sales in September as mention by the game's developers. There is no word as to how many packs and at what price per a pack is but from past experience it would make sense that this new series be close to 3 million packs ever made and maintain a cost of $2 each. Although this is just my guess as there are many factors at play here. For instance a lot more players now than ever before and the existing card prices have mostly increased at least 10x.

What Cards Are Low Cost and Worth Buying? Aug 2021