Hi friends, I hasten to congratulate everyone on Bitcoin Pizza Day, I wish you success with investments in cryptocurrency, and I am pleased to share my successes in Splinterlands.

Today's day quest for the element of Life was not the most successful and brought some DEC, some potions and a couple of rare cards - Venari Crystalsmith and Twilight Basilisk: But unlocking the Chaos Legion Pack's purchased the day before brought an excellent Life Sapper archer and an Epic Magi of Chaos in Golden Foil! In my opinion it's a very cool card and a worthy alternative to the rather expensive Spirit Miner mage, so I decided to try out a couple of strategies, one of which turned out to be quite spectacular.

In the first position is a powerful SHIELDBEARER, with great health and the ability to "attract" enemy attacks on itself.

Since the battle was Noxious Fumes rule and all cards are poisoned, I put the mighty KRALUS on the second position, capable of resisting negative effects and dealing magic damage besides melee.

The third line I gave to the mage BILA THE RADIANT, which restores its health while dealing damage to the opponent, which is a very useful ability in a poisoned environment.

The fourth line was given to MAGI OF CHAOS, who was supposed to deal damage to enemy ranged positions while my first two cards were holding their ground.

I finished the combo with SILVERSHIELD SHERIFF, which has a lot of health in addition to its strong attack, which is very important for poisoning.

My opponent chose an excellent set of strong Fire cards, and GRUM FLAMEBLADE with FORGOTTEN ONE, supported by IFRIT RISING and MOLTEN ASH GOLEM looked pretty dangerous, but my mages and archer did their job. Deprived of the archer and GELATINOUS CUBE was left only to deal with his powerful melee cards, and here not the least role played the difference in speed.

Very pleased with this fight. 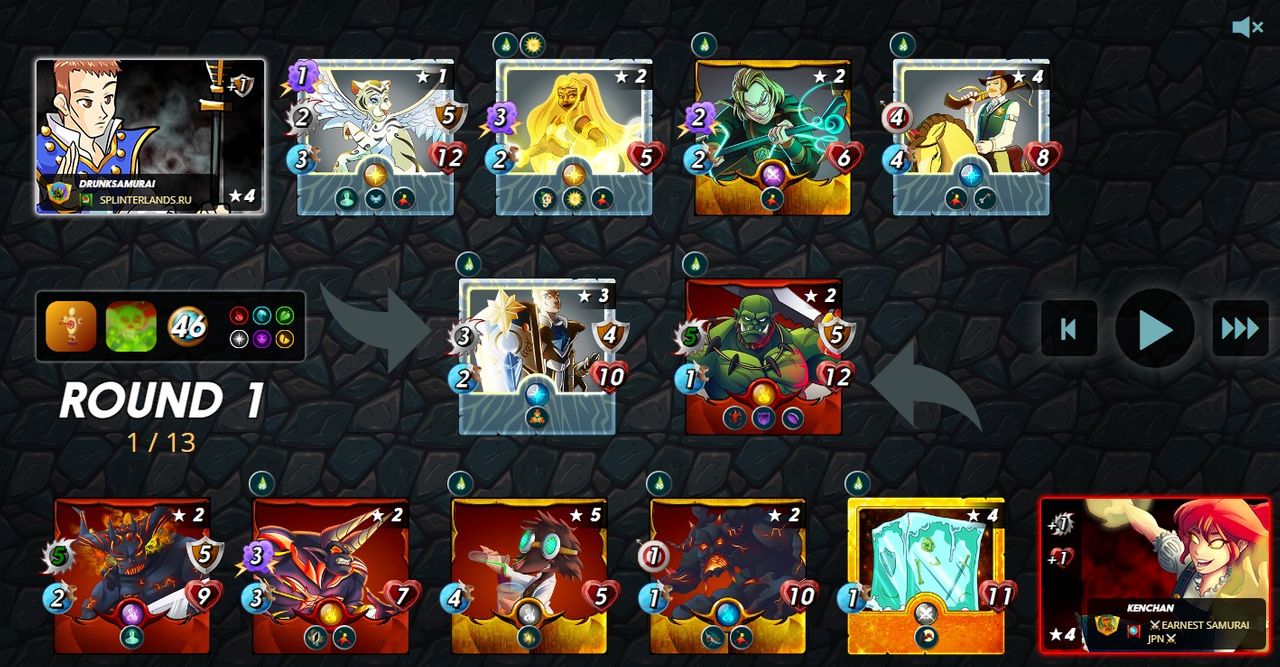 Finished with the battles engaged in the finances, and the last week I'm actively building up my CTP on the LISTNERDS platform, and the "bonus" tokens I get into the game by buying DEC / SPS or exchange them for perspective tokens SCV, with which you can get a share of SPS after the launch of validation nodes.

At the same time I pumped my pool PIZZA:ONEUP and there are already about 1500 ONEUP tokens in it. The next target will be 2000, so in the near future I will try to write more often.