When two days back, news agency Reuters, referring to some anonymous sources, published the news of India proposing a ban on crypto and criminalizing its possession, issuance, mining, trading and transferring (just as it was stated in the old draft bill), most main stream media picked up this news from there. Thus "Crypto Ban in India" once again started to find a place in news headlines.

This FUD news unnecessarily created a lot of panic among many Indian crypto investors.

It most likely seemed some paid news or had some vested interest as there was no such development to trigger such a nerve-wracking news which had a potential to have a devastating impact on crypto markets, without any provable sources.

Therefore, I immediately published this post with a link to video where Finance Minister herself sound quite positive about cryptocurrencies and blockchain technology.

But Reuters news had already done the damage by then.

So here, I'd like to quote another news source from the mainstream media.

Ruchi Bhatia, a senior journalist and Deputy Bureau Chief of ET Now has just tweeted this: 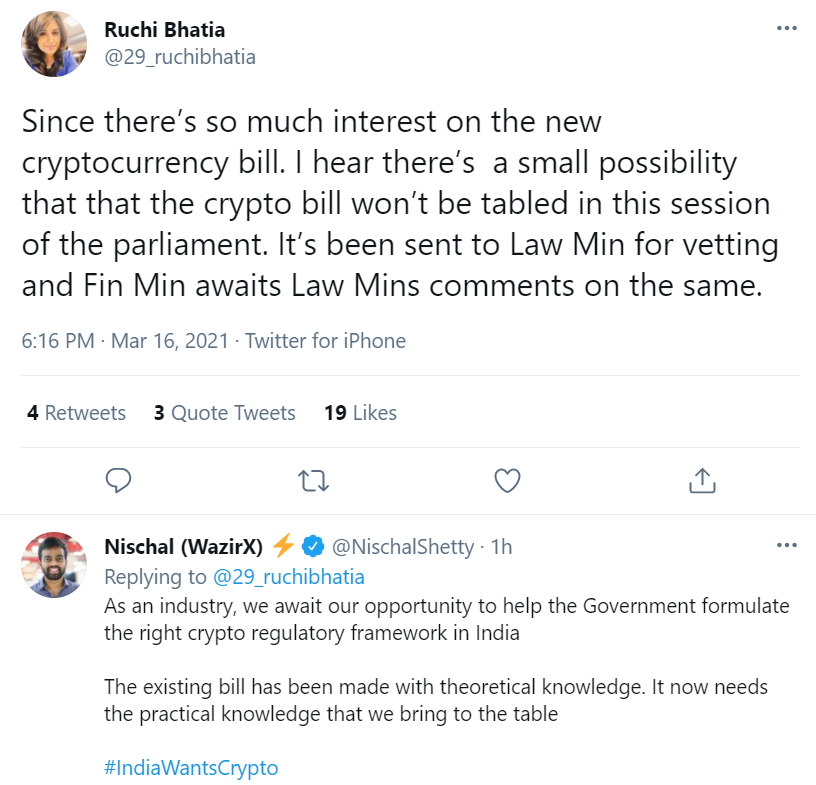 She says that crypto bill may not be tabled in this Parliament session. And I believe, she could be in the know!

Current Parliament session is already being cut short because of various States going to polls and other reasons like festival of Holi etc. were also considered for its sine die adjournment March 25 onwards. It was scheduled to be concluded on April 8th.

Therefore, this tweet from Ruchi Bhatia may have some credibility.

Don't go by the Reuters old recycled news which was fed to major media outlets. It has no legs for sure. This is how I feel about such an irresponsible news!