Hive Town Hall 1 x @Deraaa: Hive and Women - What is your experience? 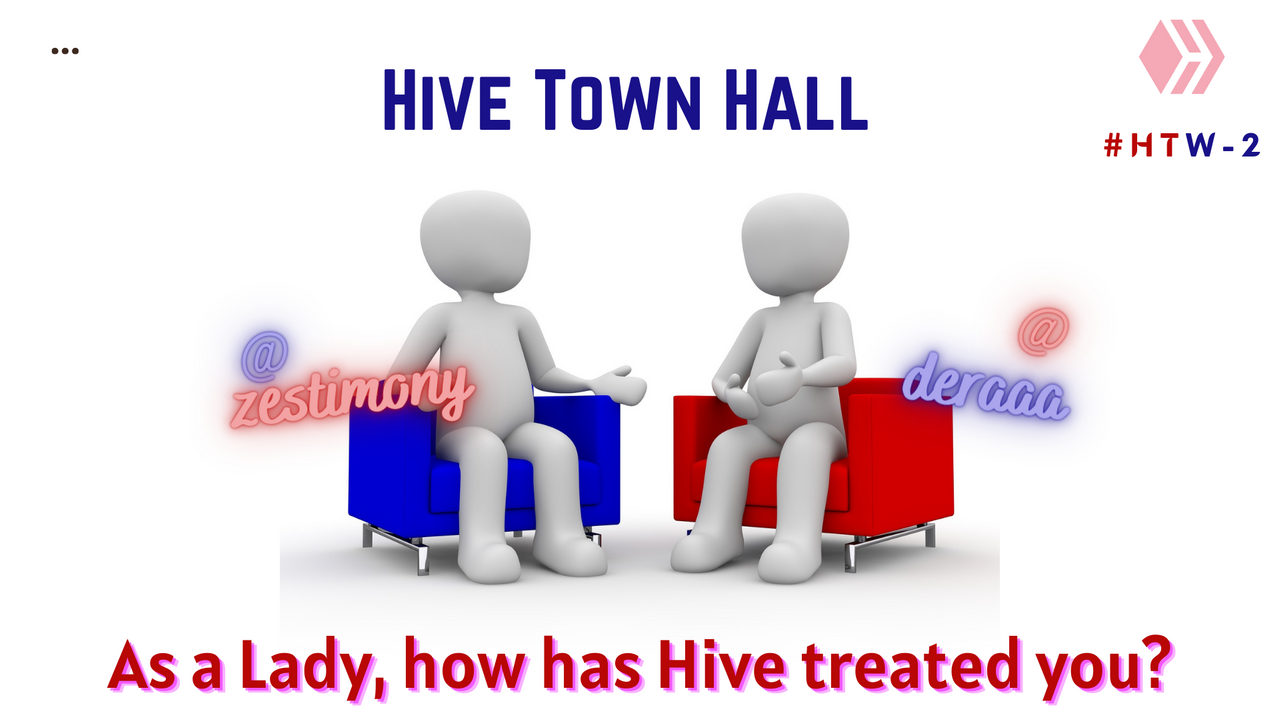 We live in a world that is erroneously referred to as a "world of men." This concept may be found affecting the work and activities of many people today, both men and women, in the world, and particularly in our workplaces.

According to current statistics, senior jobs in traditional businesses are overwhelmingly held by men, with women accounting for only approximately 14% of top management positions in countries like Nigeria.

While the Hive blockchain is a decentralized ecosystem created to resist gender differences, as seen in the first episode of the Hive Town Hall, the world remains a place where you are either male or female (though other gender roles are emerging, that's a story for another day).

Furthermore, distinct Hive blockchain communities generate several microcosms beyond the blockchain, allowing them to use centralized systems to interact, which, unlike on the blockchain, interpret gender norms more.

But now it's your turn, @Deraaa.
- How has the Hive blockchain treated you as a woman?
- Have you ever had an experience where you believe the outcome would have been different if you were a man?
- Has the blockchain succeeded where others have failed in terms of gender balance when compared to regular workplaces?
- Or do you think something could have been done differently?
- What is the tough truth if at all, there is any?

Thank you @zestimony for having me. It's an honor to be a part of this. This is quite a question and it's going to receive quite an answer. I don't think I have ever been made aware – directly or indirectly – that I'm a woman on the Hive Blockchain or that I should act like one.

In fact, if anything, I'm being reminded daily that I can be whoever and whatever on the Blockchain. Being a female on the blockchain has its merits indeed, just as being a male does, but I don't think our sexes count when we are ultimately faced with the task of socializing or, in this case, learning.

The only things that matters is your personality, flexibility, and reflexes. This is something that is rare to see in the office environment, especially where I am based. The North. It is like common knowledge over here that a woman can't be placed over a man, even if she's more worthy, has more experience and earned it.

I believe the Blockchain has given us a taste of what it should be like out there. Right here on the Blockchain, you come across amazing women who add value daily and are applauded for it. Whereas there is envy, sexism, and misogyny prominent in the official environments. There's stereotyping. This is perhaps the worst.

A woman can't be made without being linked to a man. Now that women are embracing technology to live their best lives, they are termed as negligent and selfish. I have been called arrogant for being confident in what I do. I believe that anyone can be their best self.

At the same time, open-mindedness is very critical for the development of any human being. Unless there's a shift in mindset, a lot of these would be seen as bad and not good.

@Deraaa has been quite articulate and provided a solid answer, and with this, she gives more women a reason to join the Hive blockchain. It is a place for everyone.

@Deraaa has given me permission to invite her friends to this conversation:

What do you think?
What is your experience?
Let's hear from you.

Feel free to join in the conversation. Your feedback, and suggestions are welcome. Also, a no tag request will be honoured as well.