Are You Who You Wanted to Be? Life is Not a Choose Your Own Adventure Novel 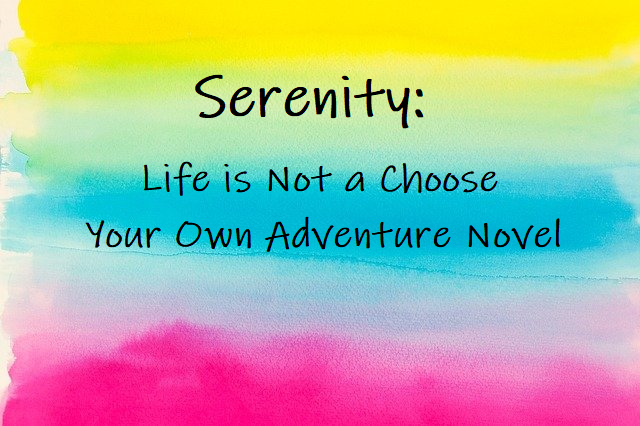 Are you who you want to be?

Did you dream of being something else, or settle down into a life that just took you along...?

When I read this week’s question, my first response was to feel regret and think of all the many ways my life has not gone as planned. However, then I remembered something important: nobody’s life goes as planned. The sad thing is that very few people realize that.

Often, we go through life with a feeling that we are somehow defective or different because we are not living the lives we planned or hoped for. We feel that “if only” some thing or person had not come alone and ruined things, we could have been living a much different and happier life. Maybe it is true. Who is to say? We can never go back and find out.

What is true is that we are living the life we are living. Have you ever read a “Choose Your Own Adventure” novel? I used to read them when I was a child. In case you are unfamiliar with them, they are books in which you can make a choice for the protagonist, and the story depends on your choice. I was the kind of kid who would go back and make a different choice to see how that story would end also. Which choices would give me the best outcome?

As an adult, I came to understand that life was certainly not a “Choose Your Own Adventure” Novel. In fact, I think part of being an adult is coming to realize that much of life is way beyond our control. We can make plans, and we should make plans. It is important to have goals, and it is important to believe in ourselves and to redouble our efforts when faced with discouraging outcomes. However, it is also important to recognize which battles are worth fighting and which are not.

Although I am not a religious person, I really like the Serenity Prayer:
“Father, give us courage to change what must be altered, serenity to accept what cannot be helped, and the insight to know the one from the other.” The Serenity Prayer was written by American theologian Reinhold Niebuhr.

I think this gets to the very heart of the daily struggle of every human being. Some things can be changed, but it takes strength, courage, and patience to change them, whether they are inside ourselves or out in the world. Then there are things that are upsetting, frustrating, or even devastating, but that we cannot alter no matter what we do. Those are things we must learn to accept. If we cannot achieve some peace, we risk going insane. As Niebuhr says, the difficulty is often that we lack the wisdom to know which is which: which things can be changed versus which things cannot be helped.

It might sometimes seem obvious, but too often, we limit ourselves with beliefs or ideas that just are not so. These are self-limiting beliefs. Of course, there is also the danger of going the other way and believing that we can change things that we cannot change.

I had a boyfriend many years ago who was a bass player in a band. Let’s call him Bob. He told me his goal was for the band to become a household name and to become a millionaire. I tried to (kindly) explain to him that his goal was futile. It was not because he was unwilling to work nor was it because they were not a good band. They were a good band. However, the other members of the band were bus drivers. They liked being bus drivers. They had no desire to play more gigs than they were playing.

Any time my boyfriend advertised the gigs, the band leader yelled at him. I found it inexplicable. He (the band leader) once explained to me that he was doing “stealth” promotion. Now, I might not be a marketing expert, but I don’t think that is a marketing strategy. I have heard of a whispering campaign, but I have not heard of turning down advertising or trying to stifle it.

So, I explained to Bob that his goal could not work because it relied on people who were uninterested in the goal. I said, “Bob, if you want to be a successful musician, you have to go solo or find a new band. This one doesn’t want to be successful. Literally. They said so.”

Bob got very angry with me because Bob was a bit of a psycho. That was a good lesson for me. I could present my ideas to Bob, but I could not actually change Bob from being a delusional person to being a person who could see sense. Instead, he blamed me for the troubles in his life and for his own limitations, and I came to see that I needed to not be around him.

I sometimes like to consider the infinite universes theory. The theory is that every time we make a choice, another universe is spawned. Think of all the people, all the nanoseconds, and the fact that there are probably choices being made on other planets maybe by aliens. Then, if this theory is true, there truly are infinite universes. For every choice, large and small, there is a new universe.

I like to imagine all the Harlows in all those other universes. Some are happier than me, and some are less happy. Some are in better circumstances, and some are in worse. It makes me feel like I am free to just enjoy this life without wasting it in regret. I can make the best choices I know how to make, and, when it feels like my life has gone terribly wrong, I can imagine that there is another Harlow, or even infinite Harlows out there who are living the lives I dreamed I would live. They are probably relieved thinking about this theory also.

Then I realize that, even if there are not infinite universes, there are people right here in this universe who have gone through things that are similar to what I have gone through. I suddenly realize that I am much less alone than it seemed. I don’t mean physically, of course. I mean in terms of life experience.

However, life is about experience, and I think sometimes we forget that. We think it is about having a plan and then executing that plan. Although it is beneficial to have plans, dreams, and goals, life is about the moments that we live. Some are beautiful. Some are happy. Some are difficult. Some are sad. They are all important moments, though and they weave together to make the fabric of our lives.

This was my entry for the Ladies of Hive Contest of the Week.

I invite @otuyanancy to join Ladies of Hive if she has not already since she is new to Hive and to join in this weekly contest if she so chooses.