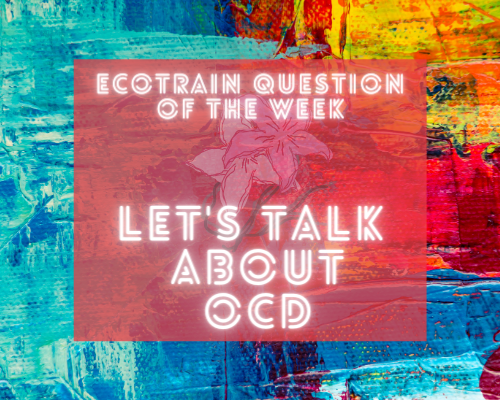 Not talking about the @ocd account / Community here btw, for those wondering. I'm referring to the "obsessive compulsive disorder" here. I don't know if you can relate to this, but back in the days, when I never even knew anyone dealing with this, I used to think people with OCD were all a bit weird, touching the doorknobs 10 times before leaving the house, or brushing their teeth X amount of times before it was fine, and with one error in the brushing routine, start all over again.

Media made me stereotype OCD

Of course, this happens with a lot of things, so this is no exception. We see something repeatedly on tv and we think it's normal. Even if we don't think about it, our mind makes us "save" this info in our brain, for when we think about it in the future. I think it's quite nasty to think about these tv shows mocking people with OCD, making fun of the most common compulsions people deal with. If you look at these people, you see they aren't having fun feeling the need to repeat stuff that many times, so why on earth would you make fun of them?

Not the usual stereotype compulsions here

No compulsions here, I never had the urges to tab on things 10 times, or touch something 5 times in a certain way before I could enter a room or leave the house, this is all something that I never encountered in real life, only on tv. I believe people have these ticks, yes, but I can't speak from experience. But here I'm only talking about the compulsions other people can see. There's another side to these compulsions: mental and other compulsions.

I have to admit that in certain situations I endlessly walk through the situation or event that's in the future, to see all possible outcomes. I can do this for hours if not days, and while doing so, I come to exclude certain outcomes or I gain new insights, giving me a certain peace of mind. I know that my boyfriend really hates it when I go on too long about something that stresses me out, but I can't stop until I have found that peace of mind and feel comfortable and prepared enough (depending on what kind of event this is). So here you can clearly see that it comes with stress or things that are out of my control. I think that the last one is the main reason, I hate not being in control and knowing what's going to happen. I need to be prepared.

The best example I can give here is rereading or rewriting things. I can't just write something short and press the publish button and be satisfied with less. I just can't.. I have this urge to write more and reread and rewrite parts constantly, making it quite a long task usually to publish a post for example. But this goes for many things, letters and for example applying for a job. I won't rush this and take my time. Correcting what I've written over and over again. It drives me nuts! Nobody probably even cares if I'd send something sooner but I have to do it to feel satisfied. It can be a good thing, but it's sometimes also a burden on my own shoulders. :)

Due to my past, I've slowly gained this obsession that I have to be in control. At first, it was mainly in case of big stressful bumps in the road that I did not see coming, that I went over the event until I figured out all outcomes. It wasn't so much the outcome that scared me, but the fact that I could have an outcome that I didn't see coming, can you believe it? It's true, and yes, sometimes I laugh about myself looking back, lol.

But sometimes I take this need to be in control to the next level, and drive my boyfriend mad when we go on a daytrip. We are total opposites when it comes to going on a daytrip. On one hand he loves the fact that I take the initiative on these things, and follows me wherever we go on top of that he never complains if I take the initiative, it's all good.. So I couldn't have it better honestly. But then the moment comes before departure, and when I can simply look up a route and it's easy, all goes well. But as soon as there's a bump in the road that messes up my plan, I freak out. I can't explain what happens, but I get highly annoyed and will stay on edge until I see that all works out in the end even with some delay. I can't say I like these moments, as it can sometimes really mean that we are not in great vibes when leaving home, but luckily, all slowly fade and my mind calms down eventually.

This is where I'm happy, I recognize when it happens, and once my boyfriend mentions it, I first respond annoyed, but I start thinking that he's probably right, and with that, I can let go of miss control freak quicker. I had to learn this, of course, but well, it's the only thing I can do about it as it's not something that's controlling my day to day life, thankfully, but it's something that gets triggered by stress and situations that I don't feel comfortable in or about and never saw coming.

I think acknowledging the behavior is the first step

To make sure it's not going to control day to day life. I would never say that everything is easy to overcome, but with so many things I have learned that recognition and acknowledgment are very important steps to change certain patterns, also when it comes to PTSD. Learning how to cope with traumas has maybe also caused me a bit of OCD-behavior, but I can also see it as a benefit sometimes because these things are enabling me to cope with some things that probably would have caused even more stressful situations in one way or the other. So even though I can be highly annoying to myself and my boyfriend when this behavior rises to the surface, I try to think of it in a way that it's also making it easier in my head to process and cope with things that are happening. I still can't move mountains and sometimes (when life is busy and stressful mostly) I just need a way to move on quickly rather than giving myself too much time to move on.

Thanks to those that have responded to my previous posts

About mental health issues. Maybe you are thinking damn that girl is crazy, she had it all. Fine, whatever :) I just hope in one way or the other I can maybe help or inspire one person to change some negative thoughts and turn them into something positive. In my experience, even the darkest moments in life can turn out to be a blessing afterward. You just have to see through the darkness and allow yourself to move on rather than staying in that situation. You may feel helpless and stuck without any options, but there are always options. You have to remove the "but I..." as an answer when people offer you solutions, think outside of the box.. Life can be great again, for you as well!

Take care of your mental health <3