IT'S BEEN ONE HELL OF A HAY SEASON

Where would we be today if it were not for Uncle Louie? Who is Uncle Louie, you ask, he's @farm-mom's uncle. He always held a special place in his heart for his niece Robin, and who can blame him, she's a rare gem.
Back in 1980, he turned us onto a piece of land that went up for sale. Within a week's time, we were the proud owners of our farm, and having Uncle Louie living up the road a piece was an added bonus.

The rock that you see in this first picture was given to him some ten years earlier and I've got a feeling that it will be there for years to come. Despite his passing away on November 6, 2017, which just happens to be my birthday, his FAMILY FARM remains intact.

The farm that he left behind is truly a family farm, maintained by his eight children.
At the helm of this operation is one of his daughters. About ten years ago, she built a house, on an adjacent piece of land. Being that she was now his next store neighbor, she became his right-hand lady. To this day, she continues to carry on many of the activities that he so enjoyed. The Smith Family Farm is a place where his children still gather on special occasions. When they are all here, the population of this sleepy hollow increases by a number that is hard to keep track of. When his eight children and their spouses, 20 grandchildren, and an influx of great-grandchildren now added to the picture, when they congregate here in UPstate NY, this place comes alive and Uncle Louie's presence is tangible! The farm sits atop 50 acres of land, like no other. Fields of hay, gardens, orchards, old-growth forests, streams, barns and a Sugar Shack, and a pond he named after his first granddaughter, are as he left them. Uncle Louie took this once dilapidated relic of a working farm and transformed it into paradise. Here's a picture of the man I speak of, Uncle Louie. Knowing him has made me a better person! Now that you have a little background on the place, I'd like to share with you an activity that I have enjoyed helping out with for the past 40 years, GETTING THE HAY IN THE BARN.

It takes an array of equipment to do the entire process and 1st up is the John Deer tractor.
This tractor was purchase 10 years ago, brand spanking new, right out of the box.
It's a workhorse and it was Louie's baby.
#2 is the mower, one heck of a powerful piece of equipment that is attached to the tractor. It makes small work of a field of hay, three-foot-high.
#3 This baby is the bailer. You don't see too many of these around anymore. It's got a couple of years on it, but it still works like a champ!
#4 In this picture we have two pieces of farm equipment, the old tractor, which use to do all of the work before the new one was purchased, and the tedder. The tedder spreads and turns over loose hay in the field, speeding up the drying process. The tedder worked overtime this season! #5 is the hay rake. This rake puts the hay into windrows, readying the hay for bailing. Doing this correctly takes some practice. 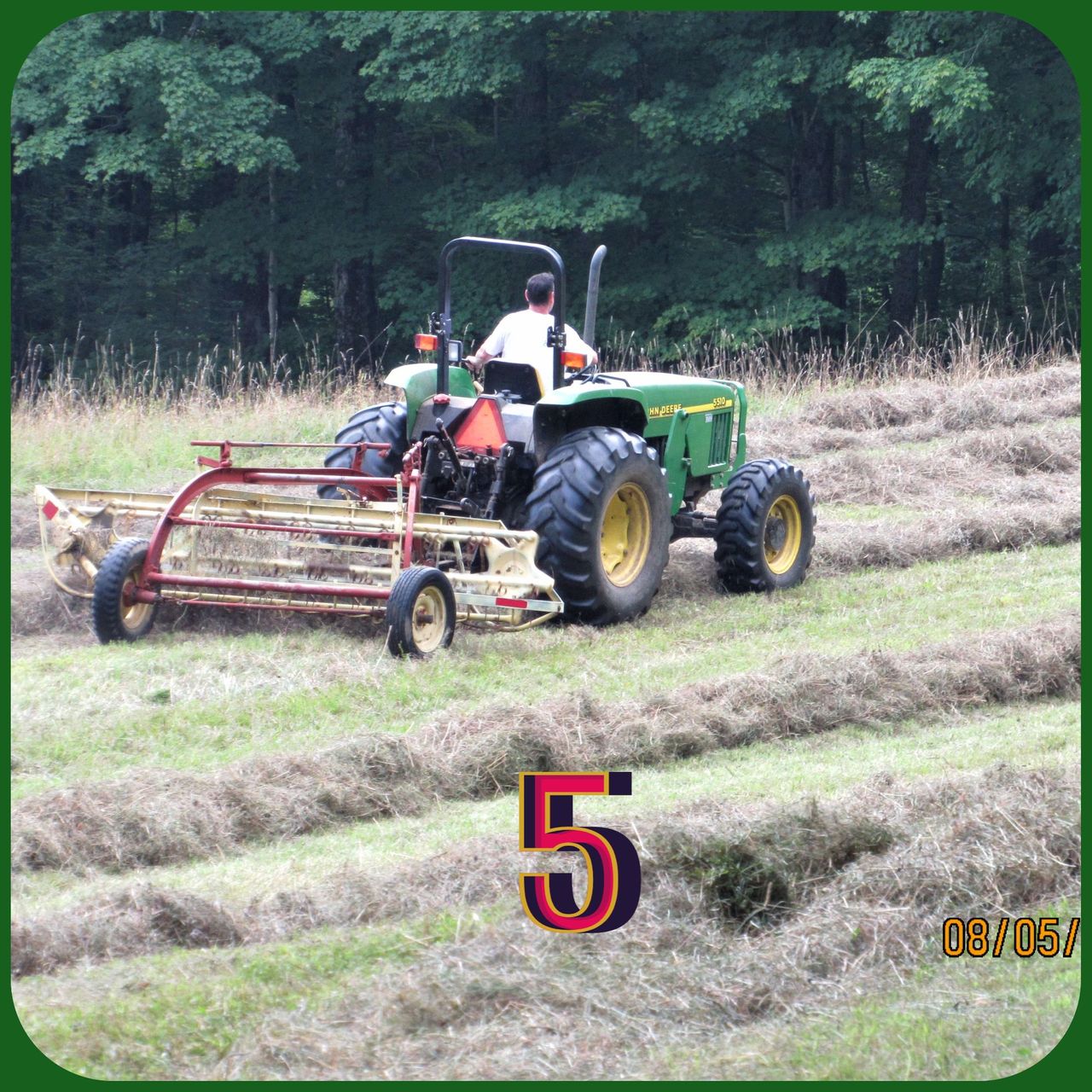 Most of the equipment I've shown you is used exclusively for making bails of hay.
This hay season was a rough one for the farmers around here as record rainfall refused to let up.

Most years, four consecutive days of sunny weather are easy to come by and are needed to be able to bail hay.

On average 1,500 bails are gathered and stored in the barn.
Only twice, were the fields dry enough to partially work.
The first time around we operated with a skeleton crew. 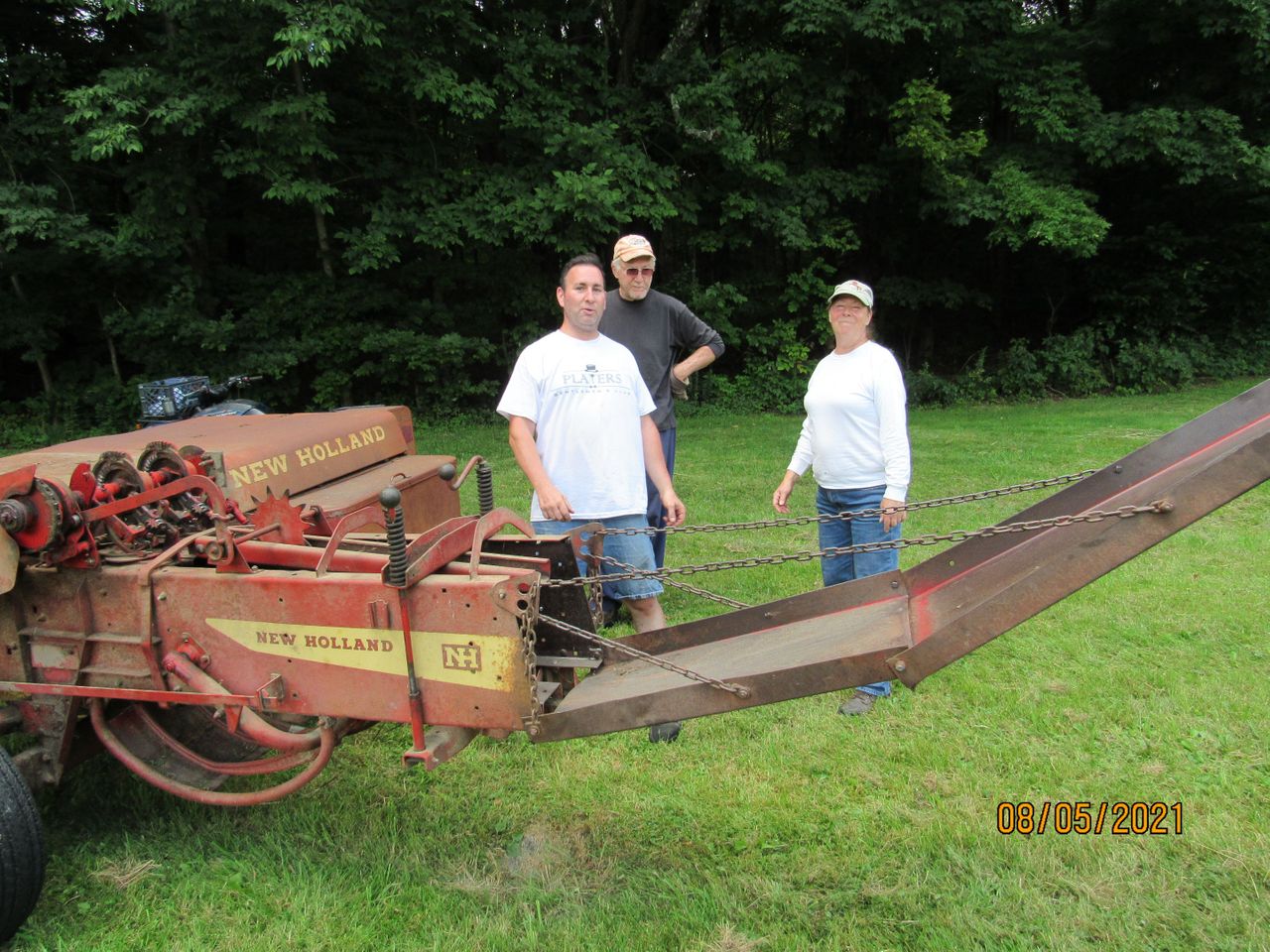 and were able to bail half of the top field. The 20-acre field was teddered later that day, and again the following day until it was dry enough to put into windrows a few days later. 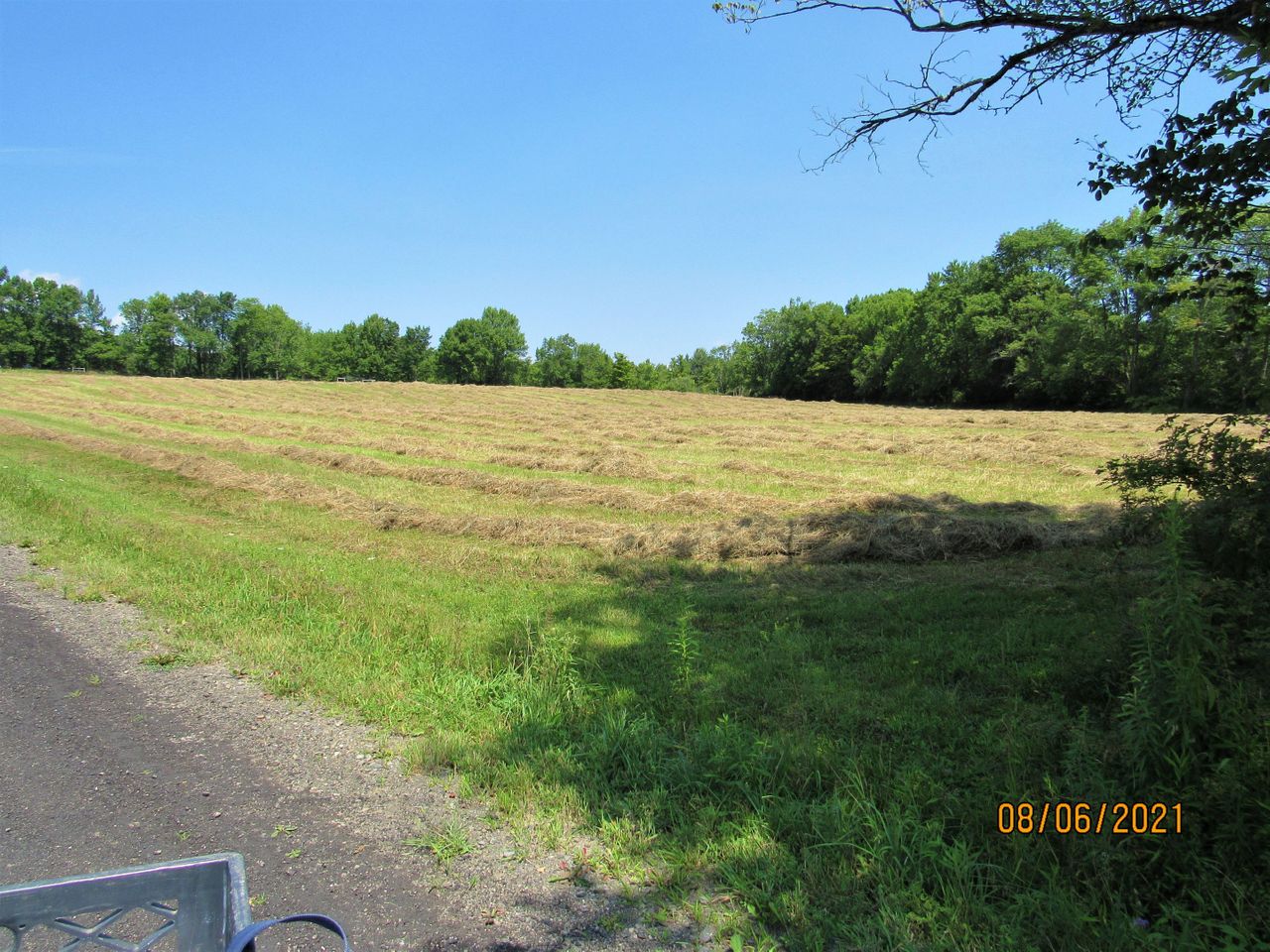 By the time we were ready to start bailing the 20-acre field, reinforcements had arrived. Everything went along very smoothly and hay bails were finally being spite out from the rear of the bailer. Hay wagons were being packed and off they went to the barn. As progress was being made, I could sense a feeling of relief washing over Robin's cousin, the lady at the helm of the whole operation. 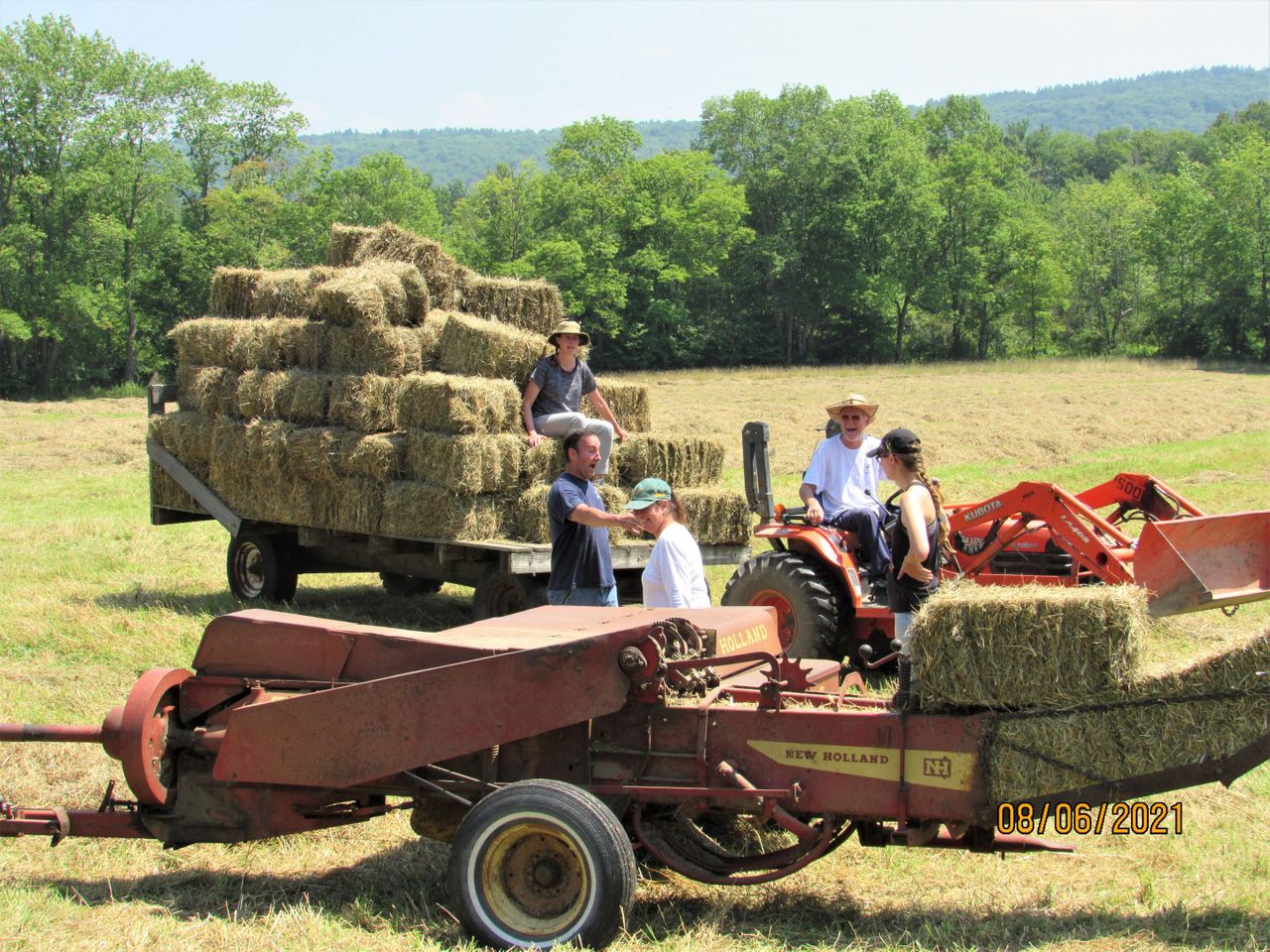 Family members had shown up to lend a hand. As is the way around here, some neighbors also arrived to help out. 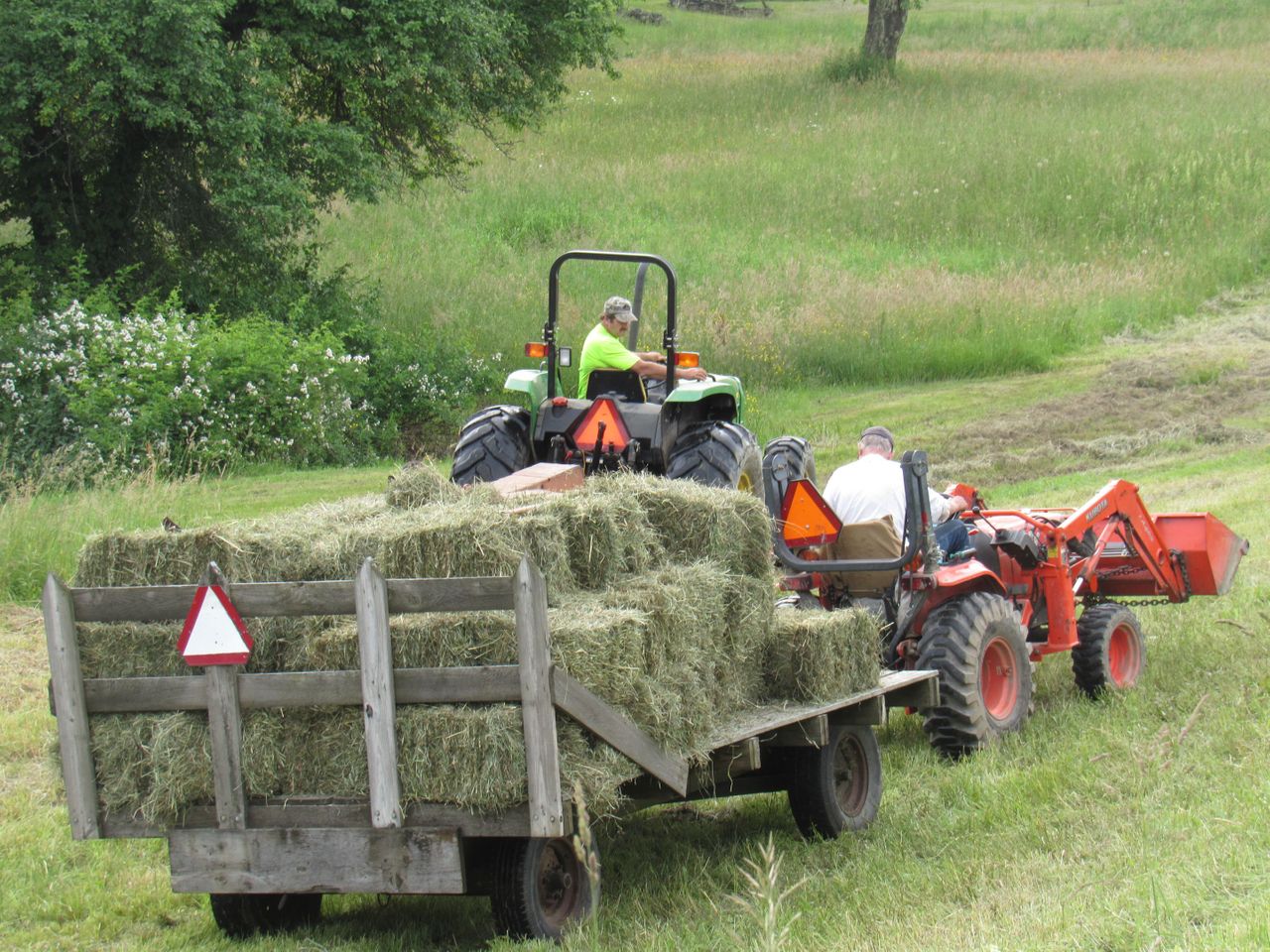 By the end of the day, we had another 500 bails of hay stockpiled in the old barn.
Along with the bails of hay that we had managed to gather a few days before, 800 bails were collected in all.
This was a far cry from the 1,500 bails that are usually collected, but considering the amount of rain that had fallen during the season it would at least provide enough hay for the animals on Uncle Louie's farm.
There will be no extra bails of hay for sale this year. #Mother #Nature had made it impossible to cut all of the fields and the remaining grass that had never been cut was brush hogged. The nutrients in the grass that were intended for the livestock were returned to the fields after it was laid down to decay. With another hay season now in the rearview mirror, I wonder what next season will bring?